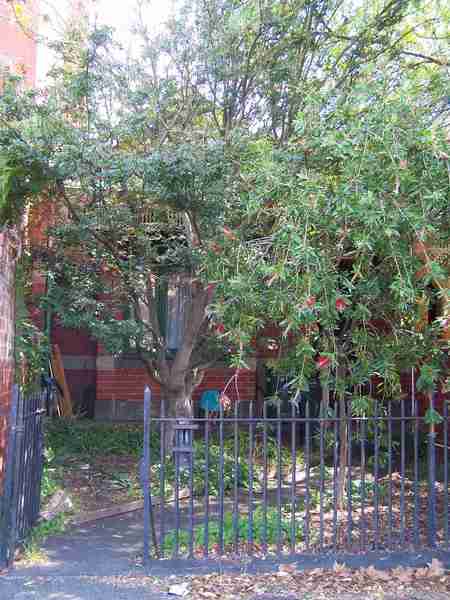 By 1900 Daniel Keir owned land on the west side of Clarke Street, at the rear of Johnston Street. In 1905 he was listed as the owner of a wooden house valued at ₤22 and vacant land valued at ₤10. In 1910, Keir built four brick dwellings on the land, all of which he leased out. Keir retained ownership of the properties at least until 1914.

The terrace at 31-37 Clarke Street is a row of four Edwardian single-storey attached brick houses. The walls are of tuckpointed red brick with roughcast rendered string courses. The hipped roofs are clad with corrugated iron and have terracotta ridge crestings and finials. The houses have casement windows with highlights beneath projecting half-timbered gables. Bullnose profile corrugated iron verandahs are separated by red brick wing walls, and have cast iron posts and lacework friezes. The entrance doors are recessed within semi-circular arched openings. The eaves are bracketed, and vermiculated panels decorate the ends of the wing walls and the frieze beneath the gables. Chimneys are of red brick with roughcast rendered caps and have terracotta pots.

The terrace at 31-37 Clarke Street is of local architectural significance. It is an unusual example of a richly ornamented Edwardian terrace, retaining intact most of its decorative elements including cast iron verandahs and fences, half-timbered gables and red brick and rough cast rendered chimneys.