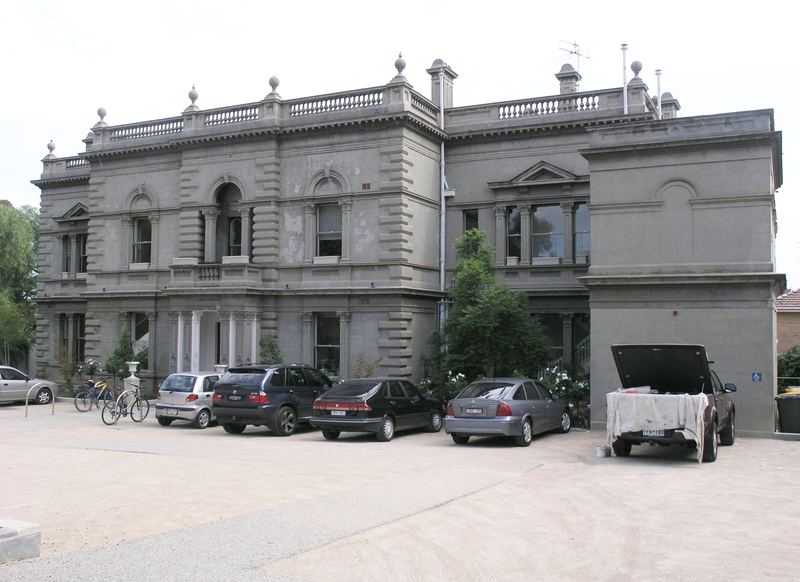 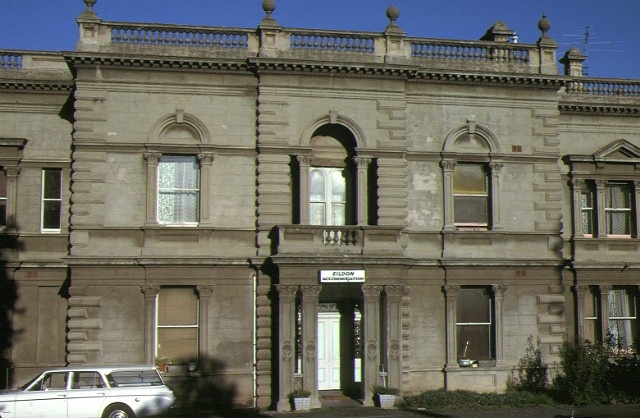 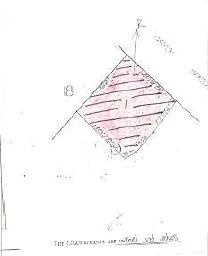 What is significant?
Eildon, St Kilda was constructed as a thirty-roomed mansion for the renowned Western District pastoralist, John Lang Currie, in 1872. It incorporated an existing Georgian dwelling which had been erected c1850-53 for Edward Green. Prolific Melbourne architects Reed and Barnes were commissioned to undertake this remodelling.

The first land sales took place in St Kilda in 1842 and Green acquired land in Grey Street, with views across the bay, in 1847. The area became a fashionable resort for the Western District squattocracy and John Lang Currie, owner of such Western District properties as Larra (stables H0298) and Titanga (H0299), acquired Green's property in 1871. Currie's family retained the property for twenty years after his death in 1898.

The earlier dwelling, known as Barham House, was a two storey building with cellar, designed by architect, John Gill. In 1872 it was remodelled in the Renaissance Revival style by Reed and Barnes. Wings were added at both ends and a loggia constructed across the western facade. This main symmetrical facade, unusually orientated towards the western garden and the sea rather than the street, has a two storey arcuated and pilastered loggia, with square Corinthian columns supporting the balcony, and flanking pavilions containing Palladian windows above canted bays. The opposite facade, facing Grey Street, has a projecting central pavilion, containing a shallow entrance porch. The whole building is rendered with a balustraded parapet and heavy corner quoining.

The first subdivision of the site took place in 1922, resulting in the formation of Eildon Road and the loss of two thirds of the property. This was followed by further subdivisions to the south and west in the late 1940s and early 1950s.

Like many of St Kilda's large mansions, Eildon was in use as a guest house by 1930. It continued to be used for similar purposes until 2007 when it was sold to the Alliance Francaise de Melbourne.

How is it significant?
Eildon, St Kilda is of architectural and historical significance to the State of Victoria.

Why is it significant?
Eildon, St Kilda is of architectural significance as one of the most sophisticated examples of an Renaissance Revival style mansion built in Melbourne in the nineteenth century and as an important work by prolific Melbourne architects, Reed and Barnes.

Eildon, St Kilda is of architectural significance for the original section of the house, which remains within the later house. Built in 1850, this section is amongst the earliest dwellings constructed in St Kilda.

Eildon, St Kilda is of historical significance as the Melbourne residence of renowned pioneer pastoralist, John Lang Currie and is an expression of the success and status of the squattocracy in Victoria.

Eildon, St Kilda is also of historical significance as an illustrative example of the evolution of St Kilda from a fashionable bayside suburb in the late nineteenth century, to an inner suburb which housed a large number of people in guesthouse accommodation after World War One.
[Online Data Upgrade Project 2007]