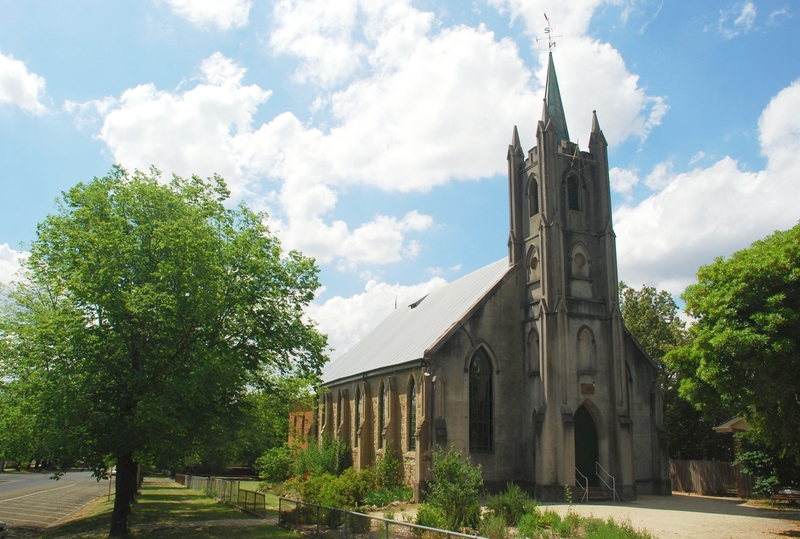 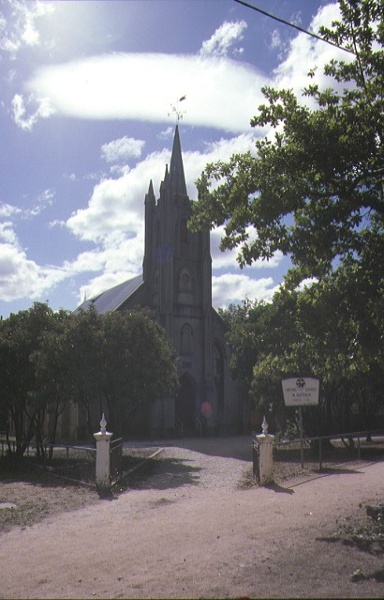 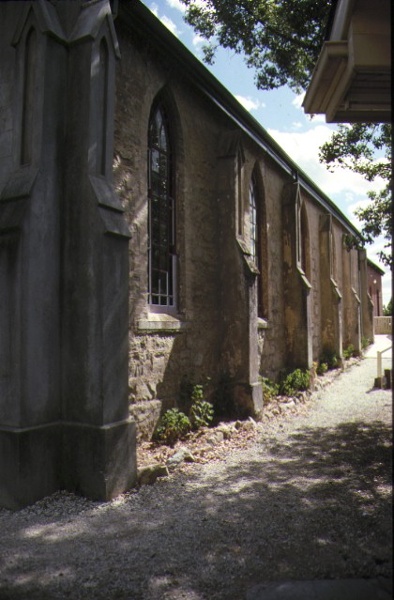 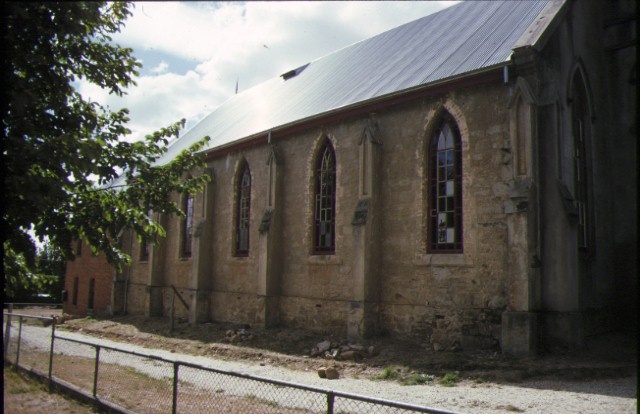 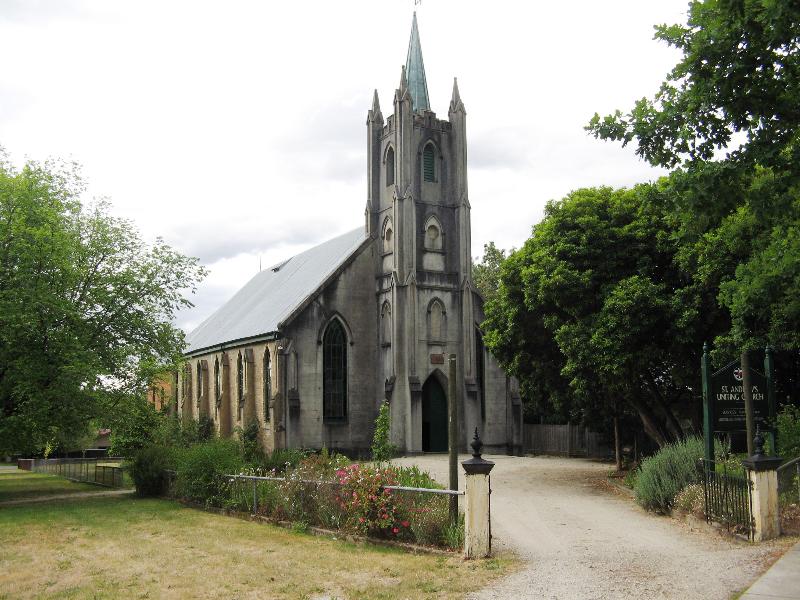 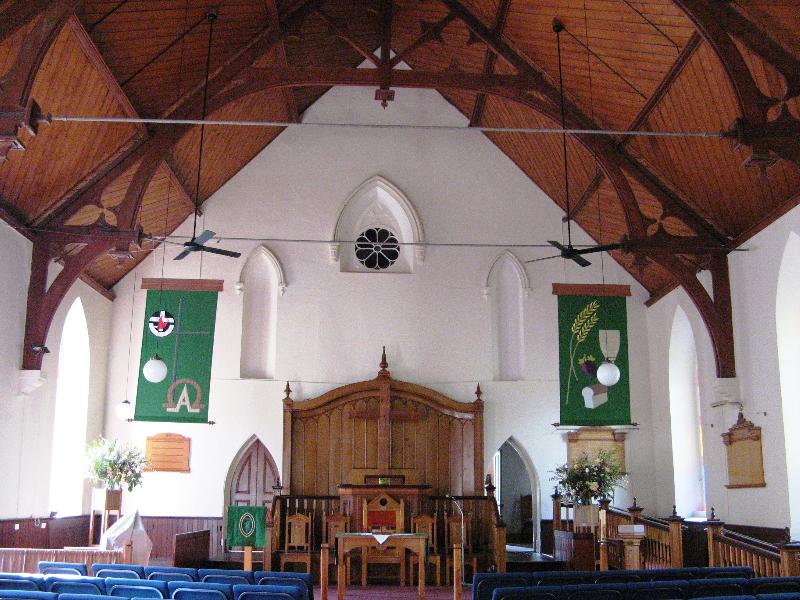 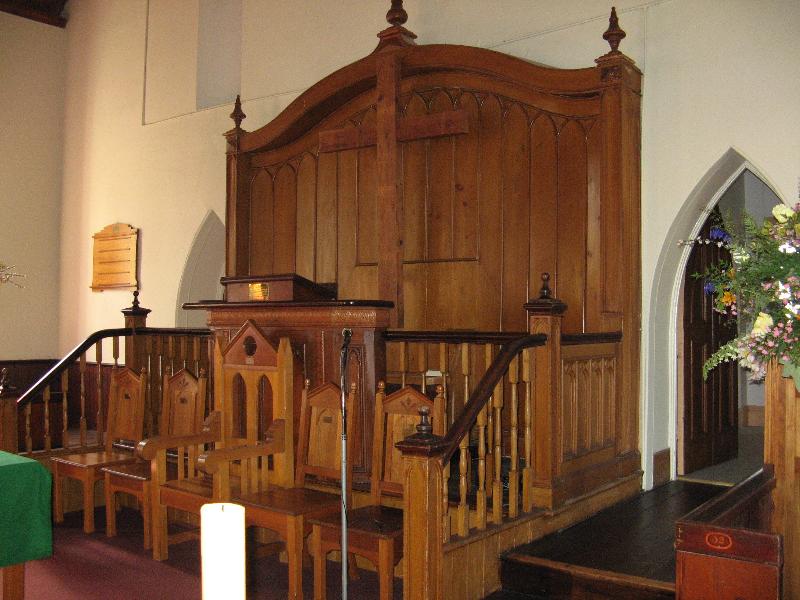 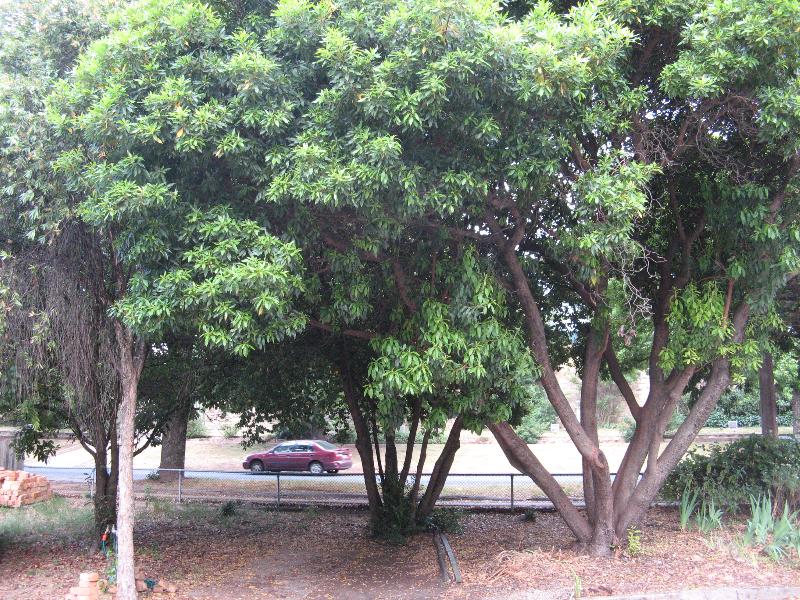 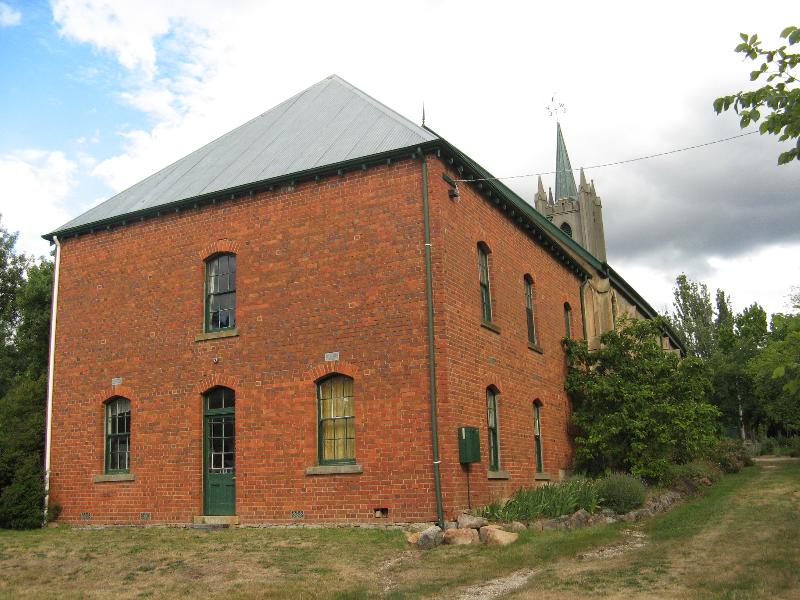 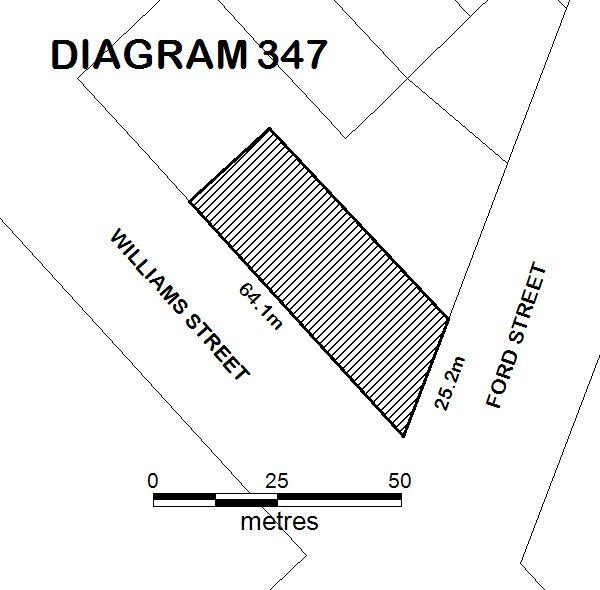 St Andrew's Uniting Church in Beechworth, consisting of the stone 1857 church, the 1883 brick Sunday school and hall at the rear, the gateposts on the Ford Street corner and the Grey Myrtle (Backhousia myrtifolia) in front of the church.

The first Presbyterian services in the Beechworth area were conducted from 1852 by a visiting minister for the benefit of the Scottish and Ulster Presbyterians who had settled in north-east Victoria following the gold rushes. The first minister was appointed in 1857, and on 6 July that year the foundation stone was laid for a new church building which opened on 25 February 1858. The architect was Thomas Turnbull and the builders were Smith, Bank & Cranston. The Rev J K McMillan was minister from 1859-69, during which time he established congregations at Bright, Benalla, Chiltern, Mansfield, Wangaratta and Yackandandah, before becoming Moderator of the Presbyterian General Assembly of Victoria in 1878. A manse was erected during McMillan's time (now replaced). A Sunday school had been held at the church since 1857, with 177 children enrolled by 1869, and a new Sunday School building was constructed adjoining the rear of the church in 1883. Beechworth had a large population of Chinese miners, who faced problems of poverty and loneliness. From 1859-1936 the church carried out missionary work among the local Chinese population, with Chinese catechists employed. The church became a Uniting Church after 1977, following the union of the Methodist, Presbyterian and Congregational Churches in Australia.

St Andrew's Uniting Church is a Gothic Revival style building, with a corrugated iron-clad roof. It is constructed of stone, and is stuccoed on the front facade. In the centre front is an unusual square tower with panel-backed buttresses on the corners surmounted by pinnacles, lancet windows with hood moulds, and a small spire, which was added to the church tower in the 1920s. The side and front windows of the church have intersecting tracery, and there are decorative buttresses between the windows on the side elevations. The interior features a decorative timber ceiling. The 1883 Sunday school abuts the rear of the church. It is a two-storey face brick building with arched double-hung sash windows and a corrugated-iron clad roof. The lower floor is divided into small rooms for Sunday school classes, and the church hall is above this. The site is enclosed by a cyclone fence, with decorative timber gateposts on the Ford Street corner. In front of the church is a specimen of Grey Myrtle (Backhousia myrtifolia), an Australian native rarely found in cultivation.

St Andrew's Uniting Church is of historical and architectural significance to the State of Victoria. It satisfies the following criterion for inclusion in the Victorian Heritage Register:

St Andrew's Uniting Church is significant at the State level for the following reasons:

St Andrew's Uniting Church is historically significant as a reflection of the rapid development which occurred in country Victoria following the discovery of gold in the early 1850s. The church was one of the earliest permanent buildings on the Ovens goldfields, and reflects the strength and wealth of the local Presbyterian congregation at the time. The Sunday school at the rear is significant as a reflection of the importance of the religious instruction of children in the nineteenth century. St Andrew's is historically significant for its long-term association with the local population of Chinese miners. [Criterion A]

St Andrew's Uniting Church is architecturally significant as a fine example of a church building of the early gold rush period. It demonstrates the simple form of such 1850s buildings, when a large number of churches were being built and economy was a major concern. Churches were as simple as possible, with a rectangular plan, a minimal chancel, no transept and little decoration. St Andrew's Church adopted these typical features of a simple church of the early Victorian period. [Criterion D]

St Andrew's Uniting Church is also significant for the following reasons, but not at the State level:

St Andrew's Uniting Church is significant for its association with the early history of Beechworth. It is one of the oldest buildings in Beechworth, and its simple form and decoration are typical of the town's early buildings. It is a prominent landmark in the Beechworth streetscape. It is associated with several eminent nineteenth century Presbyterians, including Rev J K McMillan who in 1878 became Moderator of the Presbyterian General Assembly of Victoria, and later John Gordon Mackie, a learned scholar who was considered to be one of the most outstanding figures in the nineteenth century church.