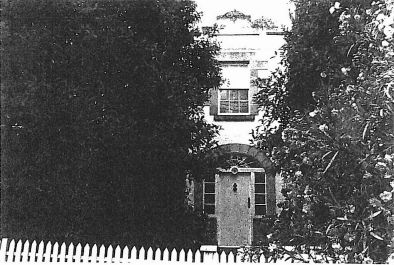 An early (pre-Gold Rush) Colonial Regency two-storey brick and ashlar sandstone house built by Captain W.H. Bacchus, the prominent founder of Bacchus Marsh in 1846-7. It was lived in by him for only two years and subsequently his son William for a further two years. It was subsequently owned by James Crook of the Woolpack Inn and in this century by the important Dickie family. It was also used as a Court and social club. It has been associated with various forms of building conservation action since 1959. A primitive log hut survives on the site, also.

The Manor House is of state historical significance as a representative embodiment of the way of life of pastoral squatters and their social values in rural Victoria, before the discovery of gold and for its association with the important and influential figure of Captain Bacchus. It with its log construction outbuilding, have further historical significance as a pioneering building in the State.

It is architecturally significant to the state as a rare representative example of the Regency Colonial style and in demonstrating fine craftsmanship in joinery and stonemasonry of this period.

It also has state historical significance in demonstrating the effect of the building conservation (or heritage) movement from its origins in the 1950s. It has social significance as being known and valued by the Bacchus Marsh community as part of its heritage and consequently of its sense of identity as a place.

Finally it has scientific significance as a potential place for archaeological and materials sampling research.