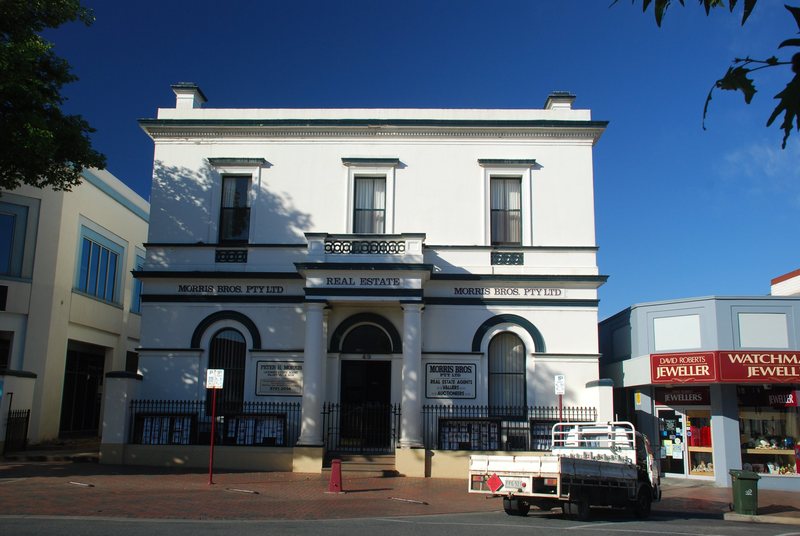 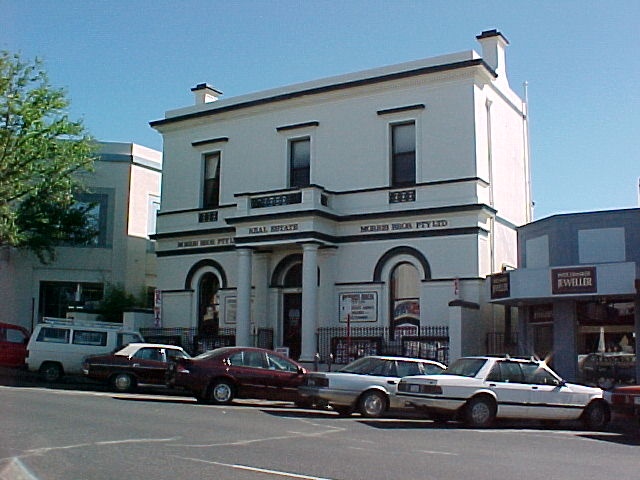 The first banks in this part of Victoria were in the gold rich town of Beechworth, and the first bank in Wangaratta opened in 1859 in a slab hut. The London Chartered bank opened in the town in about 1871, and built these premises in Reid Street in 1875. The bank was absorbed by the English Scottish and Australian Bank (ES&A) in 1921 and in 1970 became part of the Australian and New Zealand Bank group. The building was designed by the architects Terry and Oakden. Leonard Terry was the most prolific bank architect in Victoria from the mid 1850s until his death in 1884. The London Chartered Bank, and later the ES&A Bank, consistently commissioned him, and later his firms Terry & Oakden, then Oakden, Addison & Kemp, to design their buildings, but he also designed banks for almost every banking company operating in Victoria.

The bank remained open during the years when Ned Kelly and his gang were considered a threat to banks in northern Victoria, and when Australia's banking journal even suggested that branch banks in country towns where police protection was not strong should be closed. In the nineteenth and early twentieth centuries accommodation was often provided for employees at their workplace, and was an essential part of the design of such buildings as schools, police stations and banks. Banks therefore often had a form similar to that of private houses; the banking was carried on in the ground floor and the managers? residence occupied the rest of the building.

The former ANZ Bank at Wangaratta is a two storey symmetrical free-standing rendered brick building in the Academic Classical style, which was common for banks at the time. It has a three bay facade and a Doric porch over the centrally located entrance. The facade is ornamented with prominent mouldings on string courses, ground floor window arches, upper floor window heads and eaves dentils. A low fence with iron pickets marks the street boundary. Two chimneys rendered and with simple mouldings, are placed symmetrically on the side walls, behind a low roof parapet.

The former ANZ Bank at Wangaratta is of architectural and historical significance to the State of Victoria.

Why is it significant?
The former ANZ Bank is architecturally significant as a fine example of bank architecture in the restrained Academic Classical style, and as a notable work of the architects Terry and Oakden. The facade is typically composed, and the Doric porch and the fine Classical detailing are significant features. The bank is an example of nineteenth century banks which were also the home of the manager, and so resembled domestic forms. The bank is among the oldest surviving buildings in Wangaratta and is an essential element of the neighbouring streetscape.

The former ANZ Bank at Wangaratta is historically significant as a reminder of the wealth of this part of northern Victoria during the nineteenth century, when bank buildings were often the most important building in the town. It is an indicator of the high status afforded bank managers in Victorian country towns. It is also significant as the office of a number of prominent banking businesses in Wangaratta, and as one of the oldest surviving commercial buildings in the town.