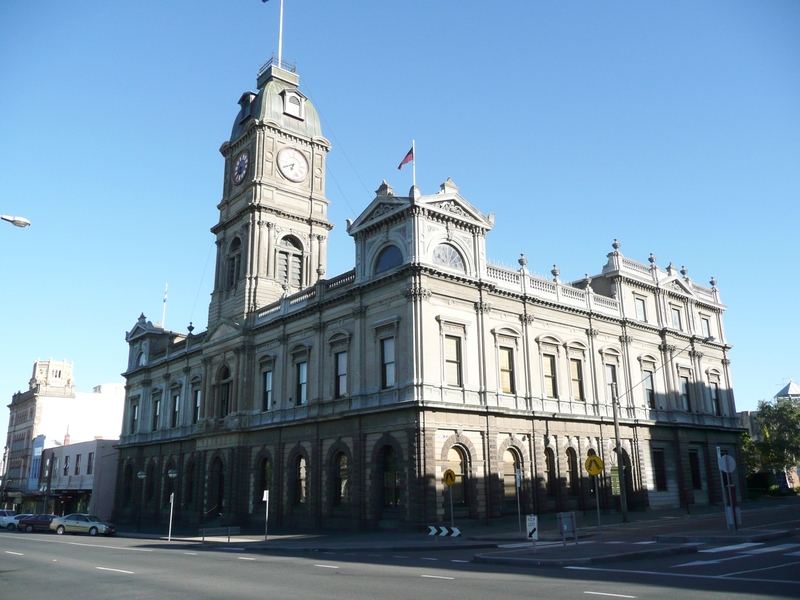 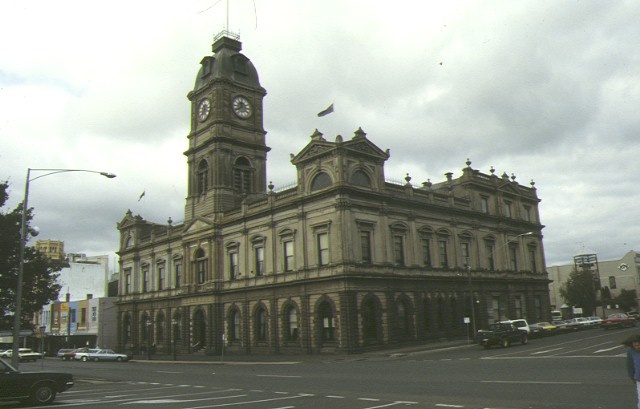 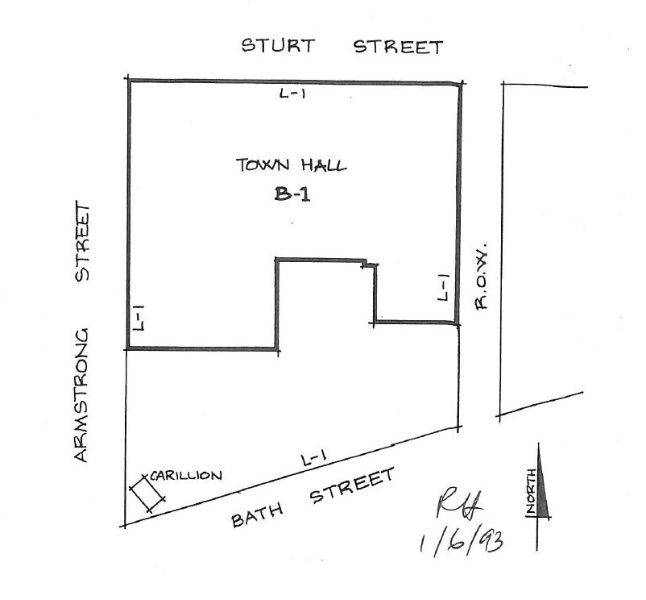 The distinctive two storey classical revival building, with central mansarded clock tower of two levels and unusual pedimented end pavilions featuring fan-shaped glazing, is one of the few grand-scale symmetrical town hall design in Victoria, and reflects the civic pride of the Ballarat citizens of the 1860s, and their vision for the future.

* The design, which resulted from an architectural competition in 1868, is interesting and unusual work of three architects - the exterior by JJ Lorenz, the interior by local architect HR Caselli, and the final overall composition by Ballarat borough architect Percy Oakden, who merged the incompatible design designs of Lorenz and Caselli into a whole. Oakden later moved to Melbourne, entered partnership with architect Leonard Terry, and became one of Victoria's influential 19th century architects. The building was erected by William Cowland.

The Town Hall is believed to be one of the only three such buildings in the world equipped with bells. The eight "Alfred Bells" in the clock tower, weighing four and a half tons were purchased to celebrate the arrival of Prince Alfred following an attempted assassination. (The Prince visited Ballarat in 1867).

The fact that part of the ground floor street frontage was rented for commercial purposes is particularly unusual in a town hall building. Indeed, the last major tenant, the Commercial Bank of Australia Ltd who vacated the building in 1965, occupied the Armstrong Street corner for 97 years.

The existence of the unfinished 1860 town hall (designed by CO Cuthbert and built by Evans and Barker), incorporated into the eastern extremity of the present building, the former police court, and the cells beneath the building demonstrate a changing sequence of usages and functions over time. The "trench room", which occupies part of the former court room has a strong historical associated with the First World War, because it was there that parcels were assembled for despatch to troops in the trenches.

Although much of the building has been extensively modernised, the elaborately decorated and skylight stair hall and the mayor's room and adjoining council chamber, complete with the original 1860s chamber furniture, are intact. The building is enhanced by having retained its natural cement render external finish as well as the stone dressings at ground floor level.