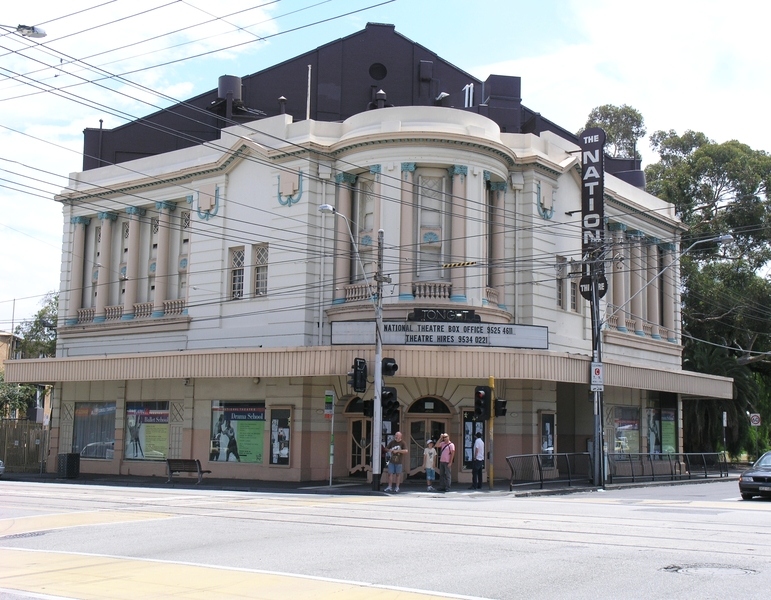 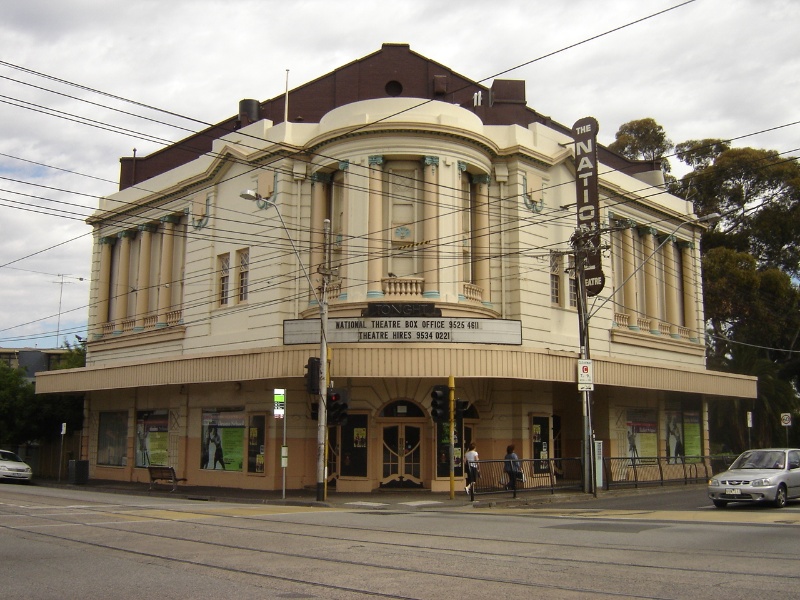 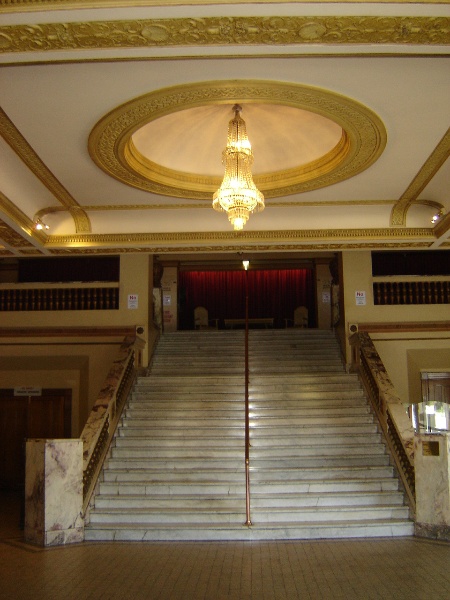 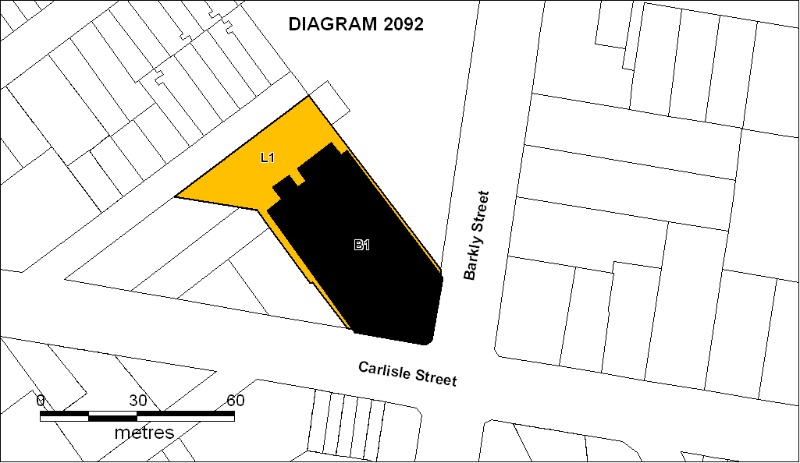 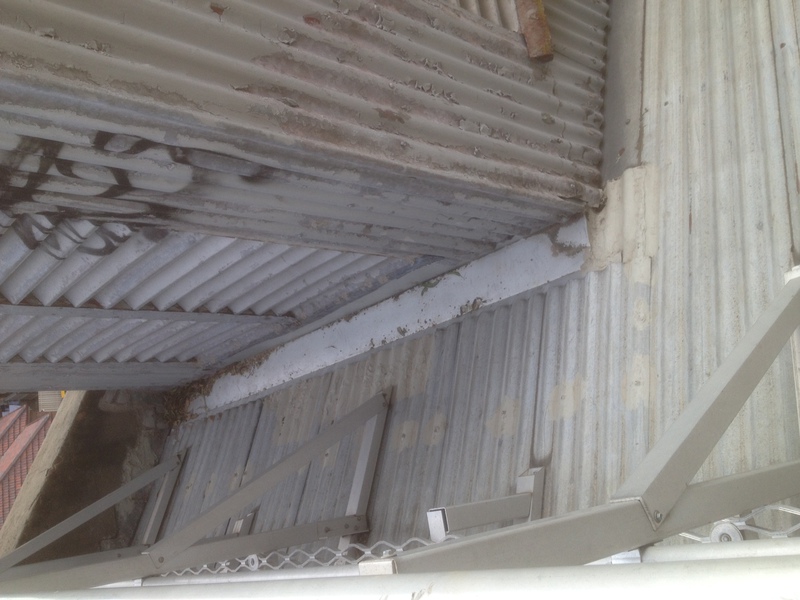 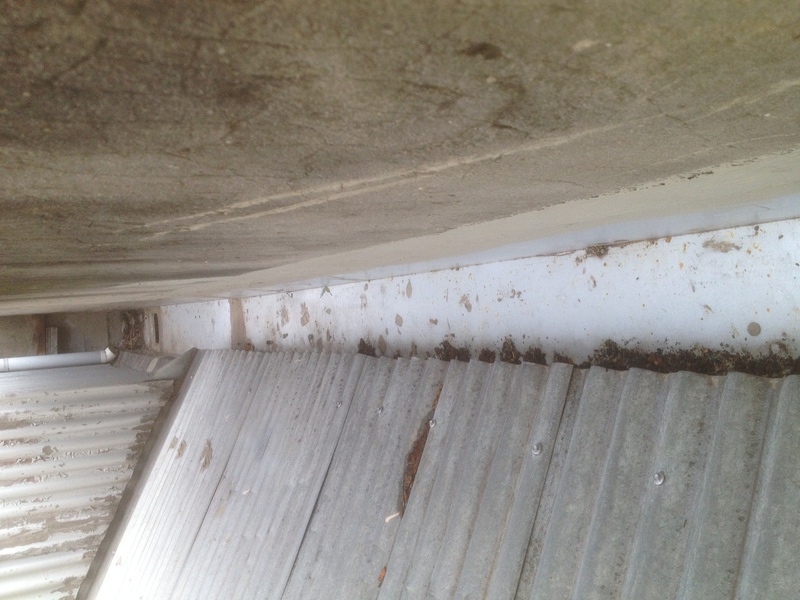 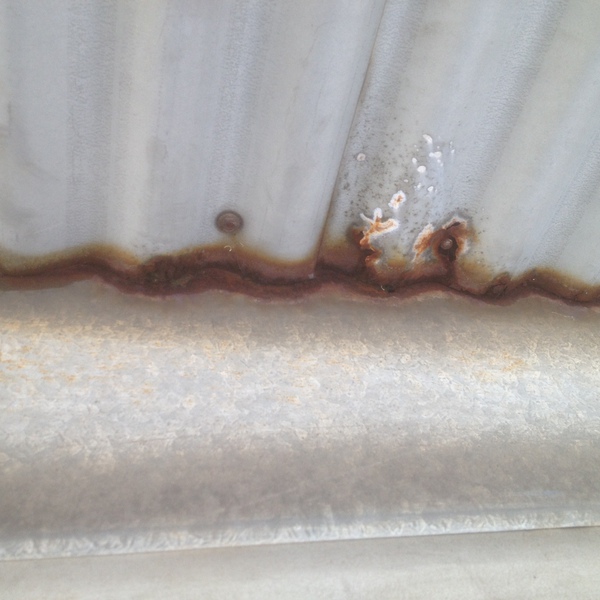 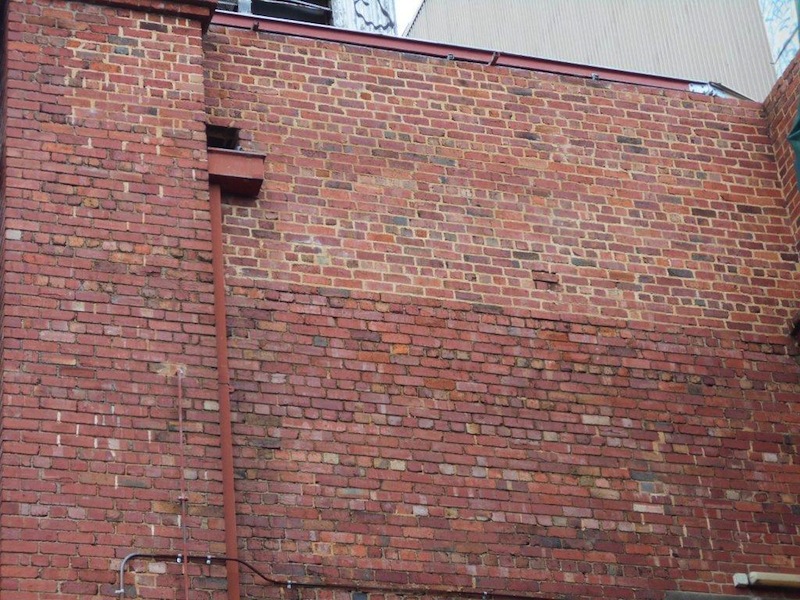 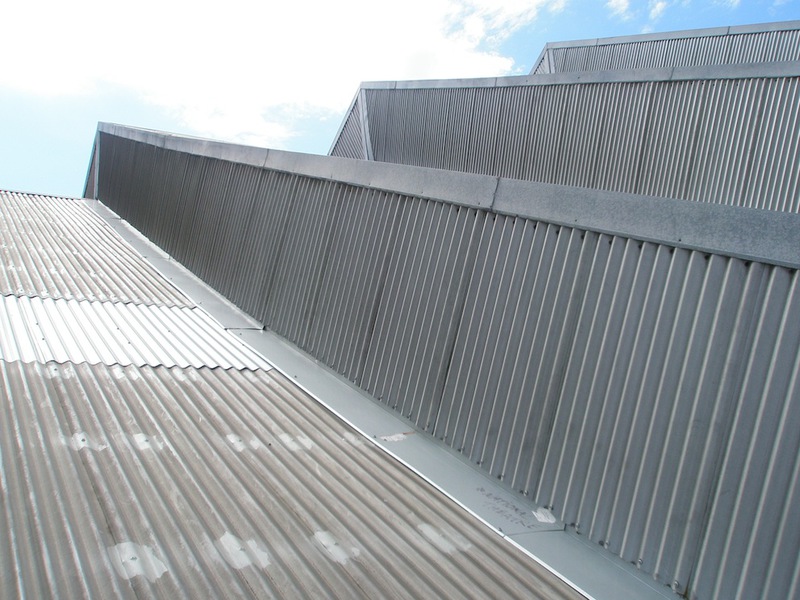 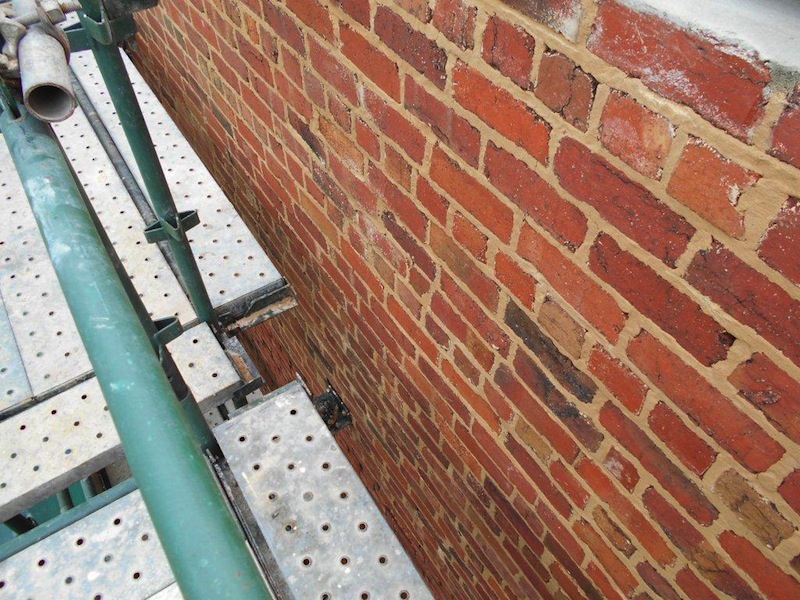 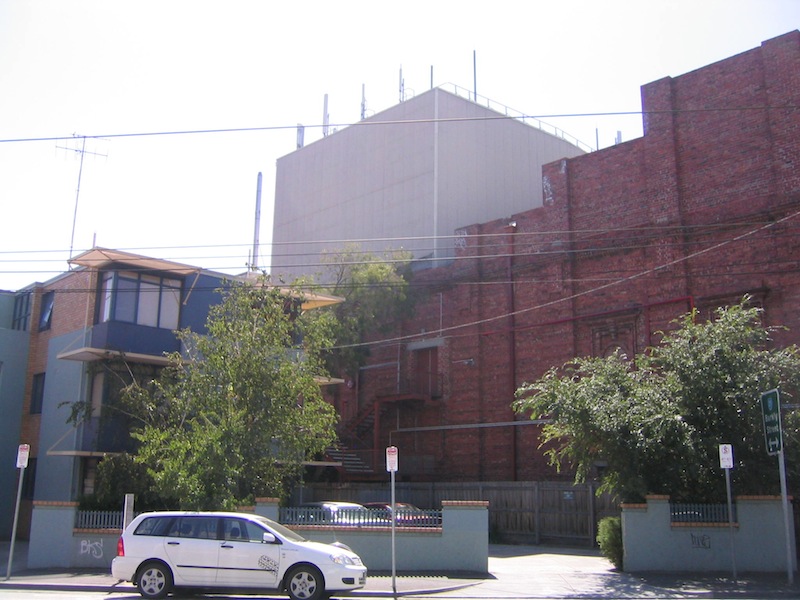 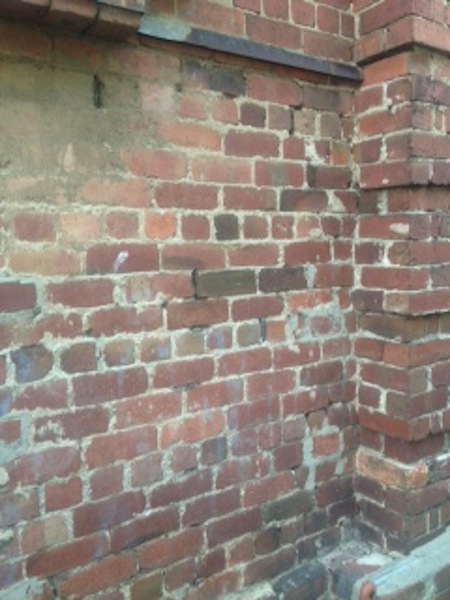 The National Theatre, St Kilda opened in April 1921 as a cinema, the Victory Theatre, described at the time as the second biggest cinema in Melbourne with a capacity for an audience of 3000. The original design by architect Cecil Keeley included a crush hall and roof gardens. By the late 1920s it was owned by a consortium that included film entrepreneur Frank W. Thring who became the managing director of Hoyts and later set up his own company Efftee Films. The theatre directors commissioned extensive alterations in 1928 to designs by the architect Cedric H. Ballantyne. The works reduced the seating capacity to 2550 and made the cinema more luxurious to compete with the newly built Palais Theatre, also in St Kilda. The works included a new proscenium arch, grand entrance foyer with panelled walls and mosaic tiled floor, upper lounge and a barrel vaulted mezzanine promenade. A central marble staircase, using Australian marble, replaced the original two side staircases. Downstairs the original plan included six small shops but two shops made way for more foyer space in the 1928 alterations. The form of the shopfronts remains.

The National Theatre, a heavily modelled Classical revival building, is sited on a diagonal axis with a triangular entrance foyer and two principal facades on both Carlisle and Barkly Streets. The giant column screens and entablature are in the Ionic order. Its symmetrical planning and monumental elevations and interiors are characteristic of the Beaux Arts style. The external side walls have exposed brick keying for stucco treatment which was never completed.

In 1971 the cinema chain Hoyts sold the cinema to the National Theatre Movement for use as its permanent home. The National Theatre was established in 1935 by soprano Gertrude Johnson (1894-1973) on her return to Australia after a successful overseas career. Her aim was to foster training in drama, dance and opera nationally and to form professional ongoing companies to undertake national tours. Schools were established in Opera, 1935, Drama, 1936 and Ballet, 1939 and professional performing companies followed in ballet and opera in 1948 and drama in 1951. During the 1960s, the success of the National Theatre's production companies waned and the focus of the company turned to the schools. The Drama School's directors have included Joan Harris, Kim Durban, Babs McMillan and Ken Boucher. The Ballet School's directors included Marilyn Jones, Kathleen Gorham (associate director), Gailene Stock, Anne Jenner and Beverly Jane Fry. The National Theatre's Opera School amalgamated with the Victorian College of the Arts in 1978.

Under the management of John Cargher, the National Theatre commissioned alterations to convert the former cinema into its school and theatre. The theatre re-opened on 7 September 1974 with the Premier, Rupert Hamer, officiating. The stalls were converted into studios, a new stage, orchestra pit and fly tower were constructed, the auditorium and foyers were refurbished and backstage facilities were completed. Most of the auditorium's ornate plaster mouldings and fittings were retained and the chandeliers re-hung. The huge Victory sign which had surmounted the ridge of the roof was removed. Two Hoyts signs were adapted to read National Theatre, but one was destroyed in a storm in the early 1990s. Some of the windows have been painted over. The original balcony front of the auditorium has been retained and forms part of the orchestra pit as the orchestra pit rail.

Objects of note housed in the building include an early carbon arc slide projector; two c.1940 Gaumont-Kalee carbon arc projectors transferred from the Regent Theatre in the 1950s; and a rare collection of seats from the Tivoli Theatre, Melbourne which were acquired by the National Theatre Company after the theatre burnt down in 1967. The individual lounge seats were a feature of the 1956 rebuilt Tivoli and include plaques with names of Tivoli stars.

The building continues to be used by the National Theatre, now known as the Australian National Memorial Theatre Ltd.

The National Theatre, St Kilda is of historical, social and architectural significance to the State of Victoria.

The National Theatre is of historical and social significance for its associations with one of the most popular forms of mass entertainment, the cinema, during its boom years of the interwar period. The 1928 alterations reflect the influence of the more luxurious picture palace style of cinema. The collection of movable objects is significant for assisting in an understanding of the technology, history and development of cinema. The building is valued by a wide community as a venue for films, festivals and theatrical performances over a long period of time. It is also valued as the home of the National Theatre Movement, recognised as a significant cultural institution in the Victorian arts scene.

The National Theatre is of architectural significance as a fine example of a cinema designed in the Beaux Arts style. The most notable elements are the entrance foyer, promenade, upper lounge and dress circle with their elaborate fibrous plasterwork and early decorative features and light fittings.