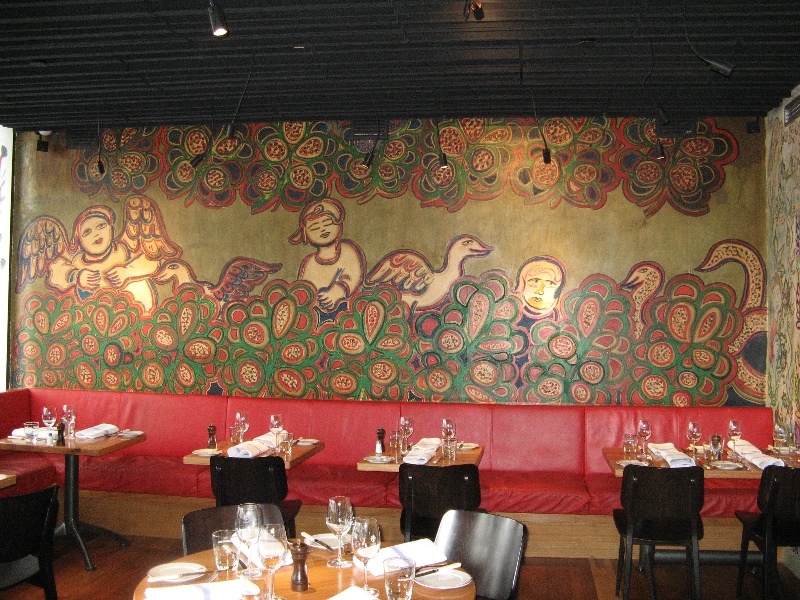 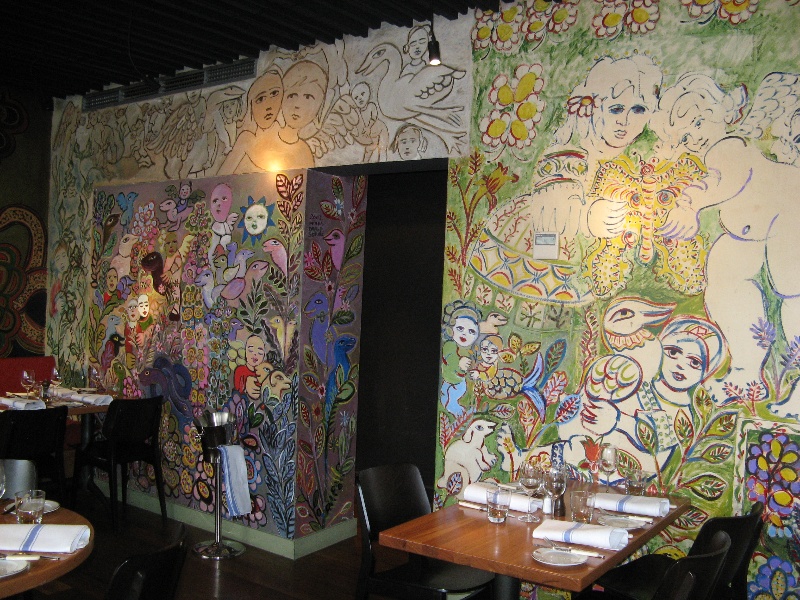 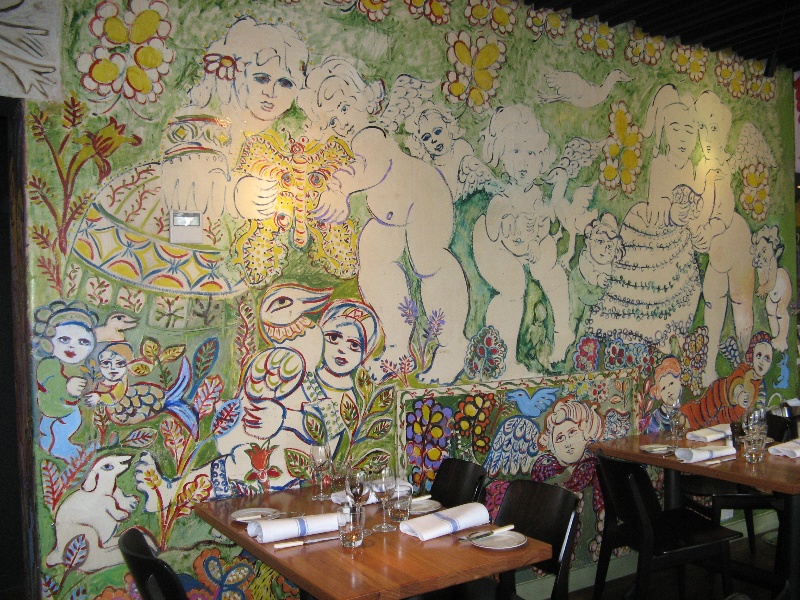 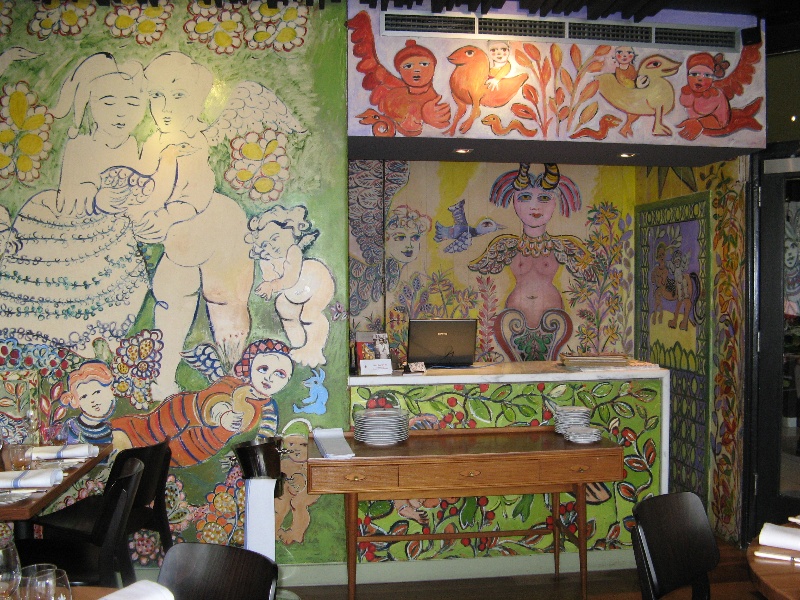 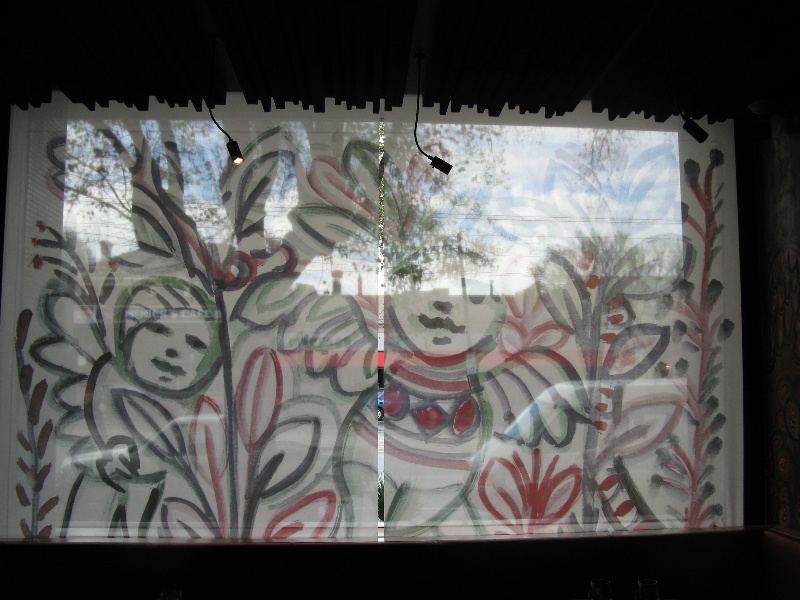 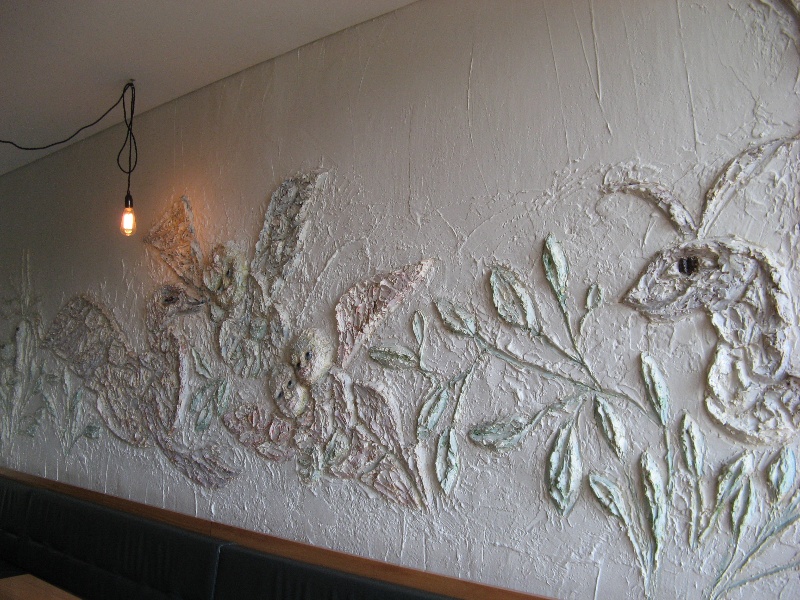 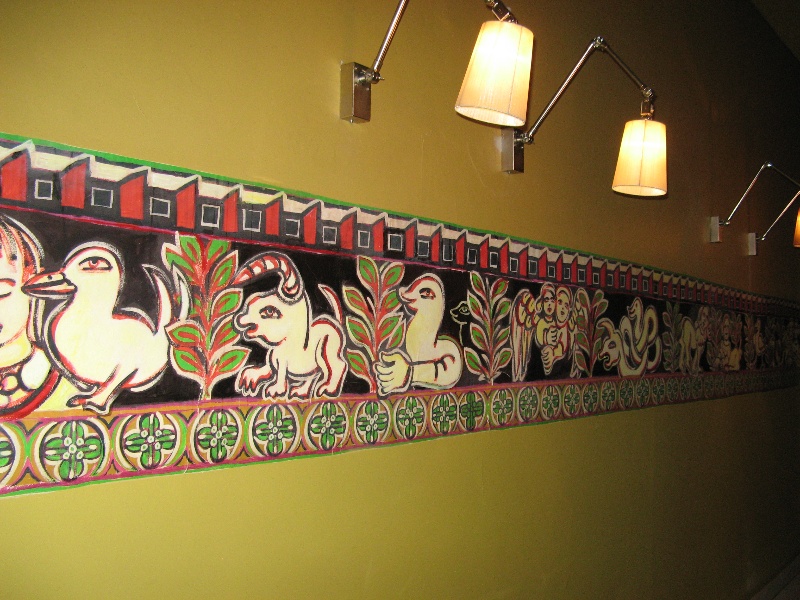 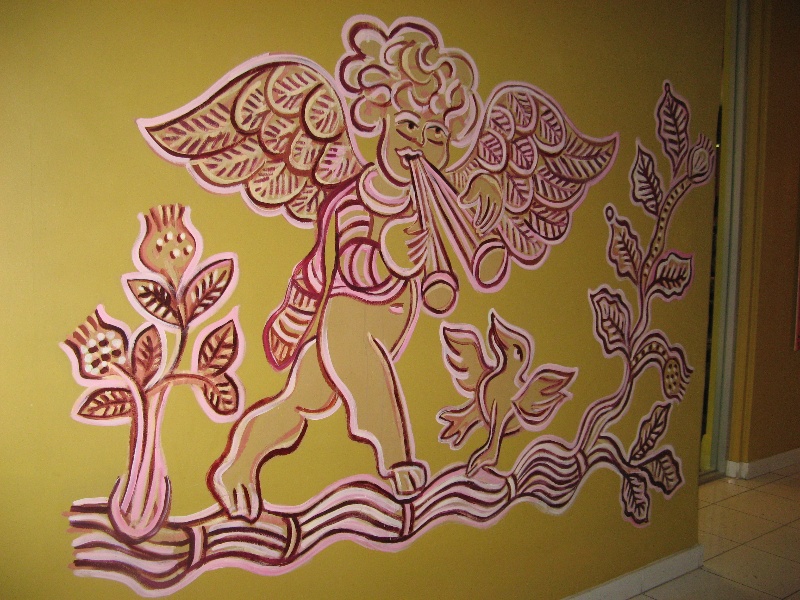 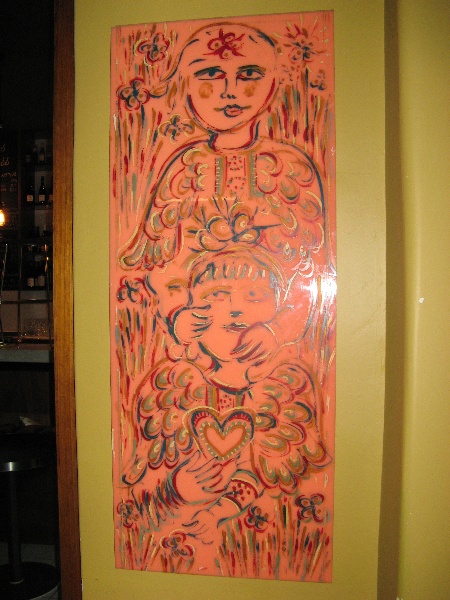 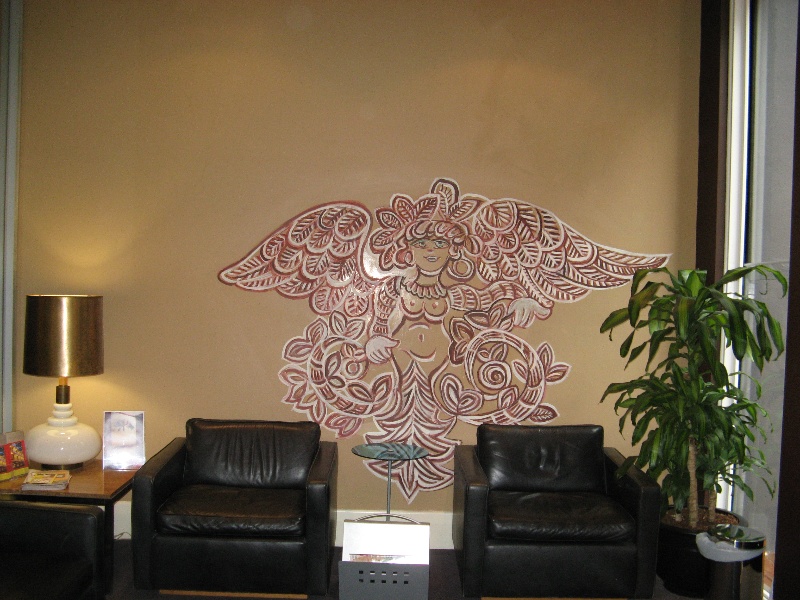 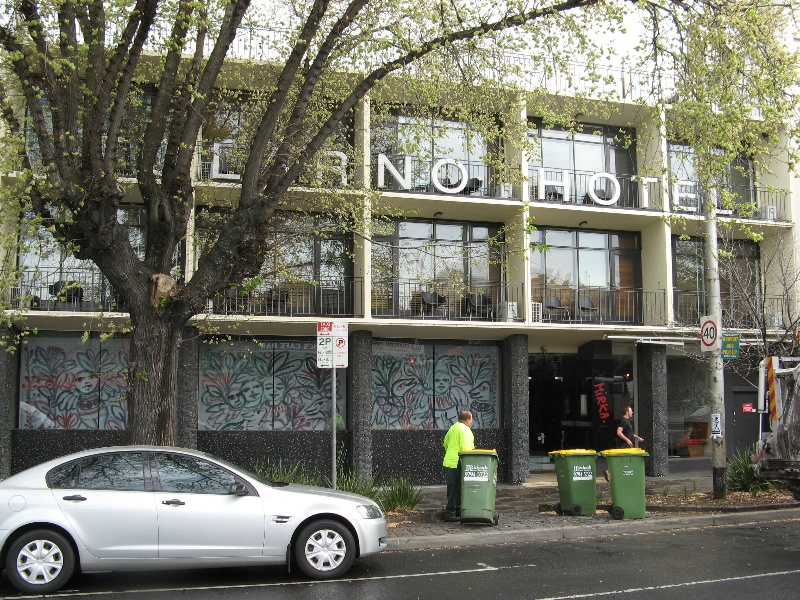 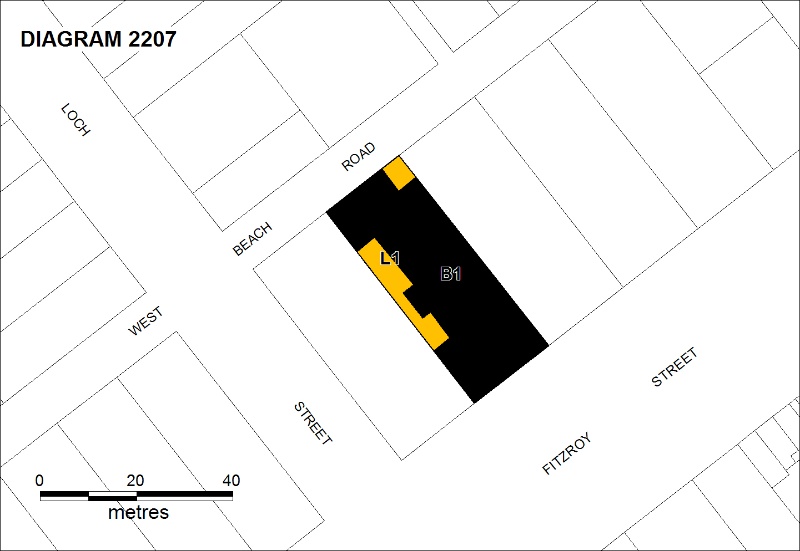 The Tolarno Hotel was purchased in 1965 by Georges Mora (1913-1992) and his wife Mirka Mora (1928- ), who had migrated from France in 1951 and had an important influence on the changes which occurred in Melbourne's cultural life in the post-war period. The restaurant was the third the couple had owned since migrating from France in 1951, following the Mirka Cafe in Exhibition Street, Melbourne (now demolished) from 1954, and the Balzac in East Melbourne from 1958, which marked the beginnings of Melbourne's cafe society. Georges Mora bought the hotel as a restaurant, art gallery, studio and home. It had originally been a mansion, was converted to a boarding house in the late nineteenth century, and then to a hotel, with the present restaurant and bar added to the front, by the 1960s. The Moras were prominent members of Melbourne's artistic and bohemian set. They were associated with the revival of the Contemporary Art Society from 1953, and their restaurants were used to display the work of local artists, many of whom have now become world famous, including Charles Blackman, Sidney Nolan, John Perceval and Howard Arkley. At the Tolarno Hotel Georges opened the Tolarno Gallery, where a remarkable series of art exhibitions were held in the 1960s. As well as displaying the work of local artists, including exhibitions of Sydney Nolan's Ned Kelly paintings and of Mirka's paintings, it was also used for exhibitions of the work of modern French masters, which made Georges a valuable emissary of French art in Australia. Between 1965 and 1978 Mirka painted a series of murals over the walls and windows of the restaurant, bistro, hallway and toilets. The restaurant has changed hands several times since 1970, though Georges continued to run the gallery until 1979. Substantial alterations were made in 2006-7, under the supervision of the architect Peter Elliot. As part of these works Mirka Mora was commissioned to restore the original murals and to paint new ones. The original painted windows at the front were replaced. The restaurant was renamed Mirka at Tolarno Hotel.

The Tolarno Hotel is a modern hotel and restaurant resulting from c1930 and c1960 additions to a nineteenth century mansion. At the front are a restaurant and a bar area, with a hallway between leading to the former gallery and hotel reception behind. The colourful murals and artworks of Mirka Mora are an integral part of the character of the place. They include the painted murals around the walls of the restaurant, a painted plaster relief (originally coloured, now painted white) on one wall of the bar, and painted murals in the entrance foyer, hallway, women's toilets and on the south wall of the hotel foyer. There are also in the restaurant three blinds with printed reproductions of Mirka's artwork created specifically for the restaurant. Eight painted light diffusers, originally hanging from the restaurant ceiling, are now mounted and hang on the walls of the hall and restaurant. The subject matter of the artworks is strongly autobiographical, their symbolism deriving from Mirka's Romanian heritage, her interest in literature and history, and later from the lives of her three children.

The Tolarno Hotel is of historical and aesthetic significance to the state of Victoria.

The Tolarno Hotel is of historical significance for its association with the great changes which occurred in the cultural and intellectual life of Melbourne in the post-war period, and with the role played in these changes by cultured European immigrants. It is historically significant for its association with Georges Mora, a prominent restaurateur and art gallery owner, and his wife Mirka, one of Victoria's best-known and loved artists, both of whom had an important influence on Melbourne's cultural and culinary life in the post-war period, and introduced to Victoria a more European way of life that has since become normal.

The Tolarno Hotel is aesthetically significant for its murals and other art works by Mirka Mora, one of Victoria's best-loved artists, which have become her most well-known public works.