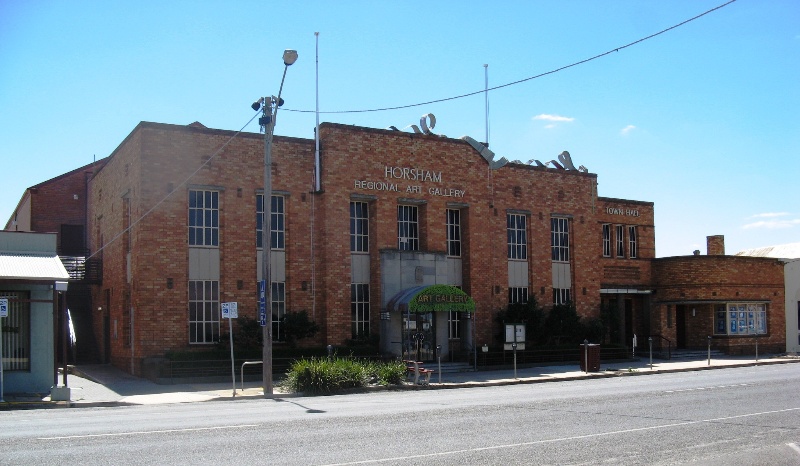 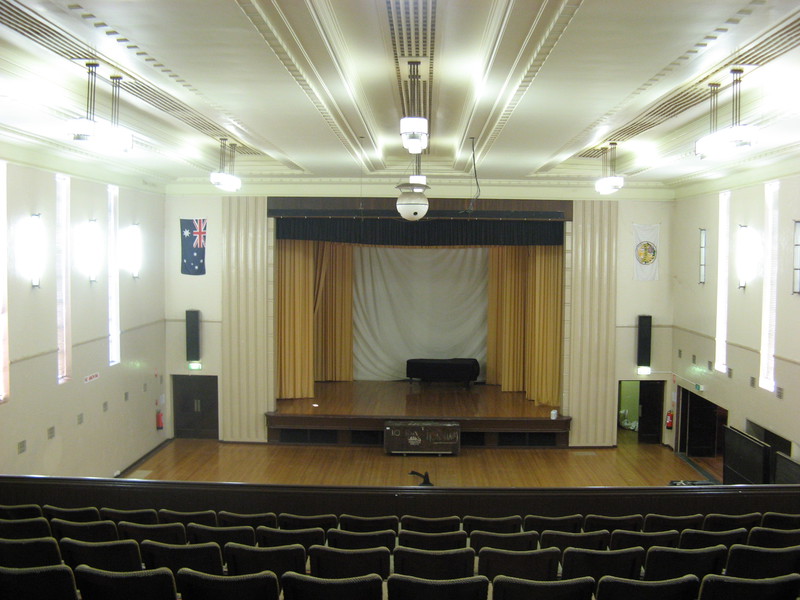 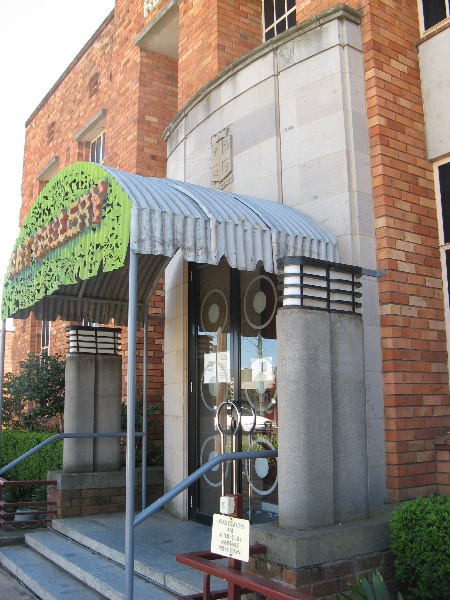 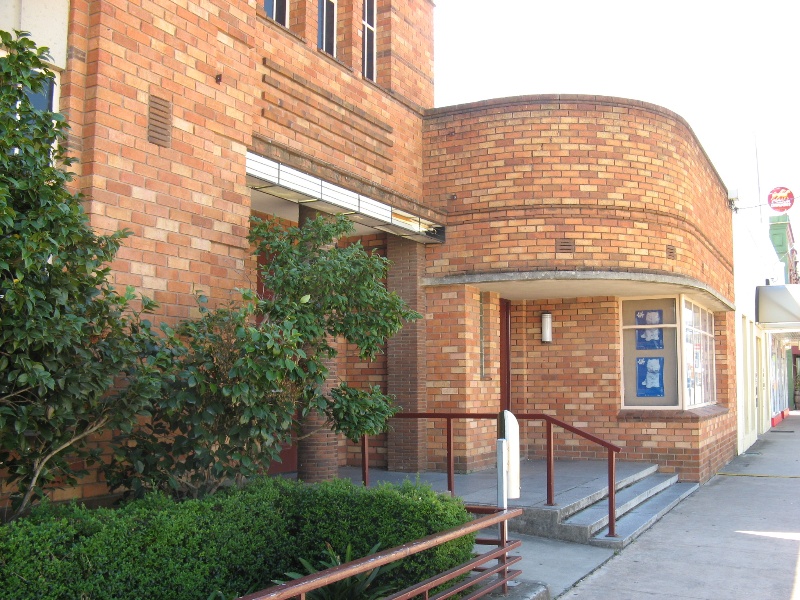 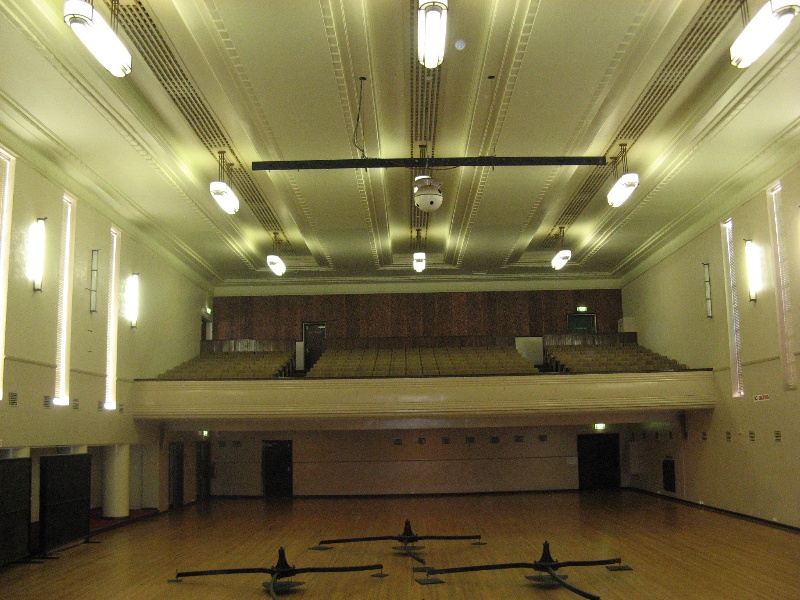 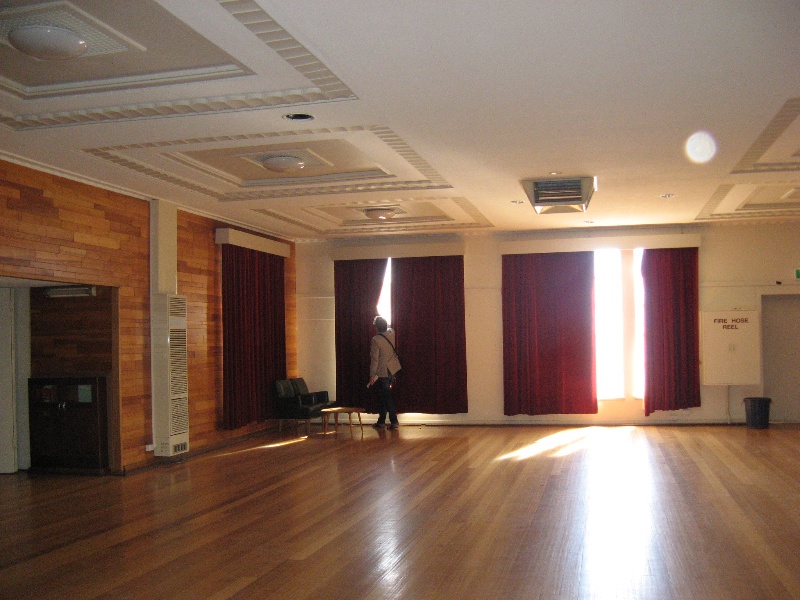 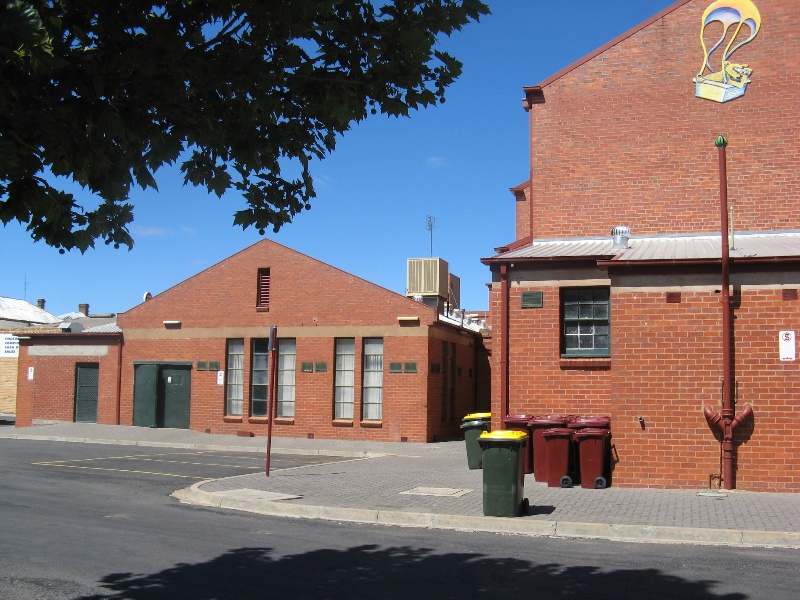 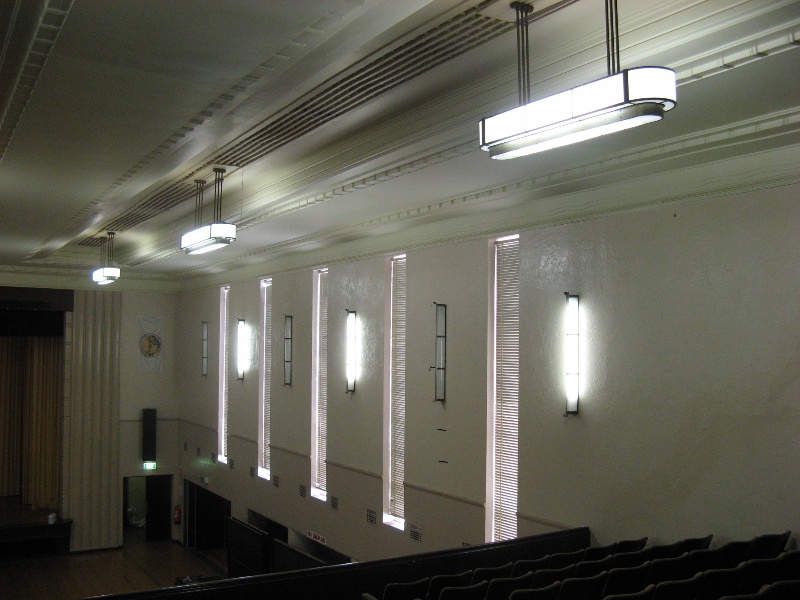 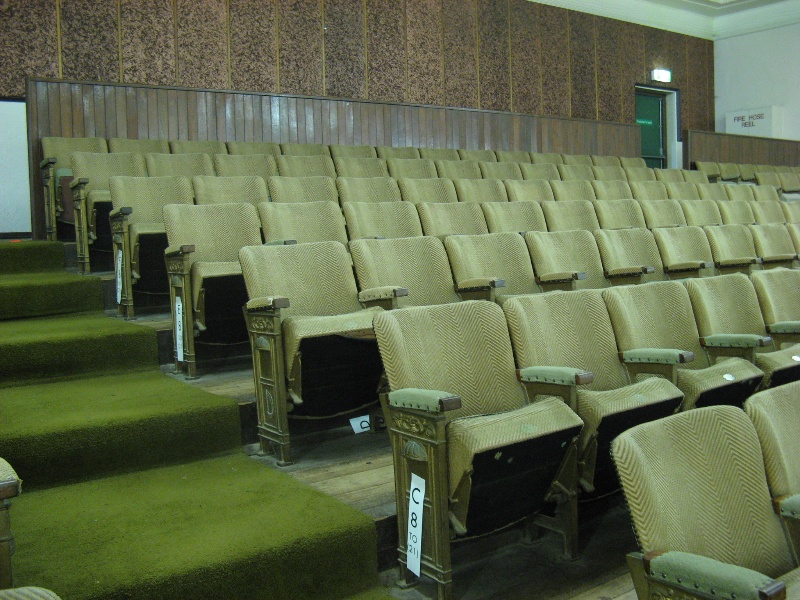 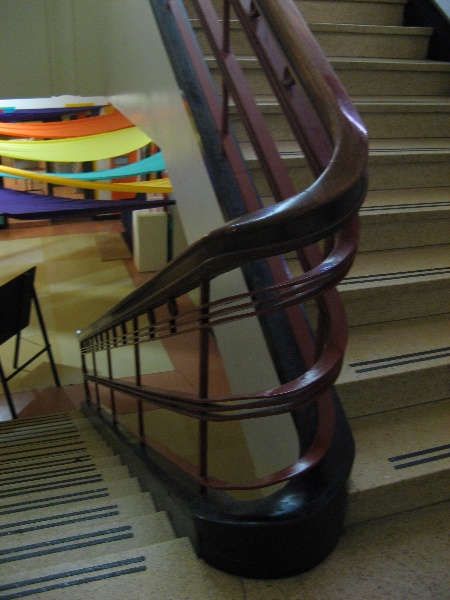 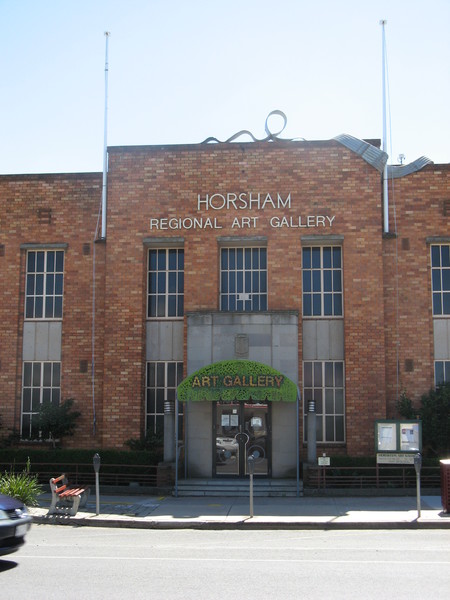 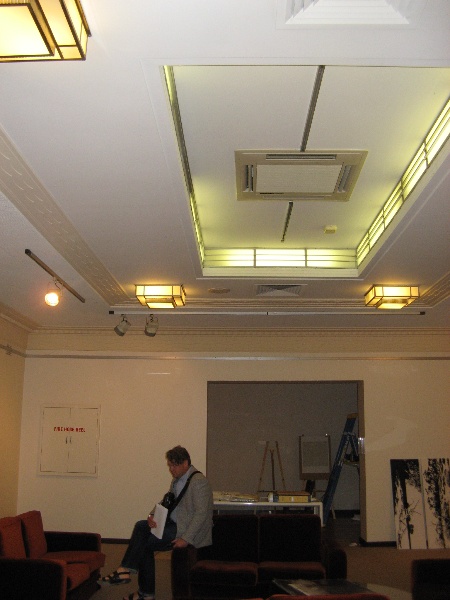 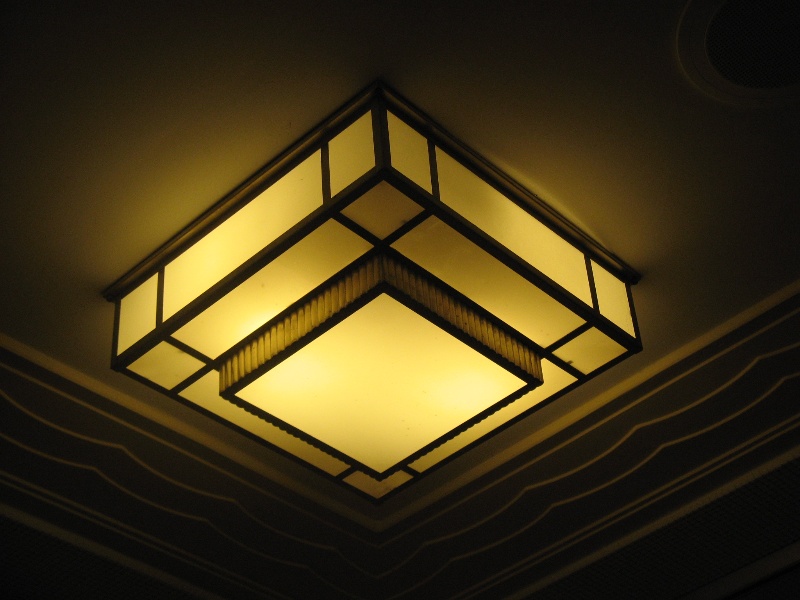 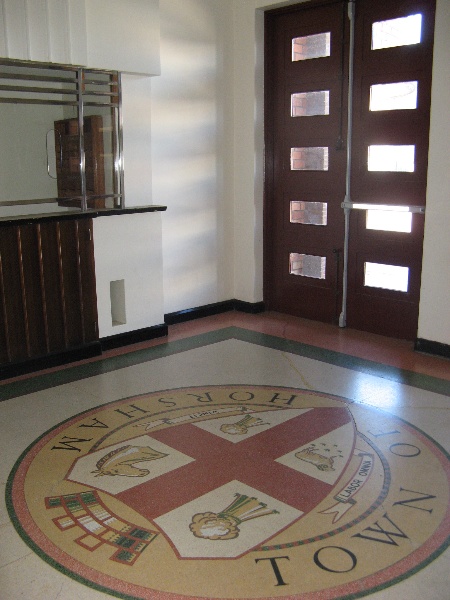 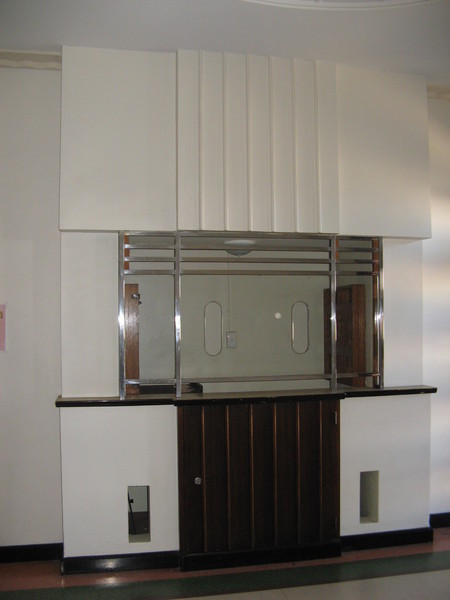 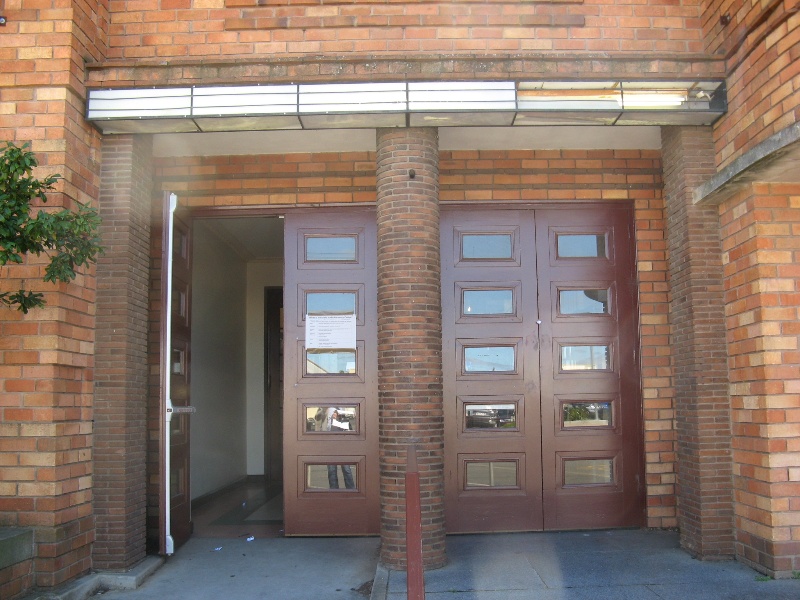 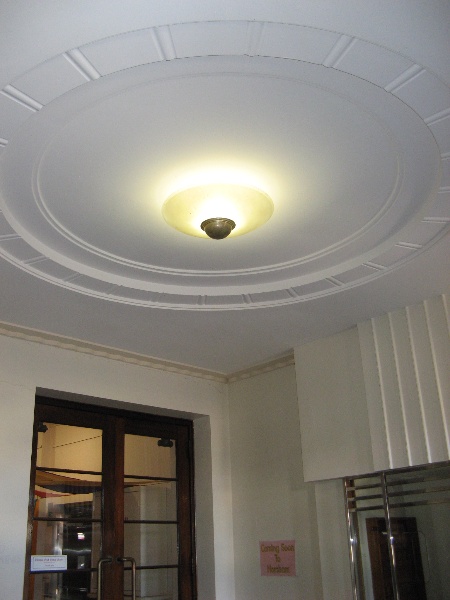 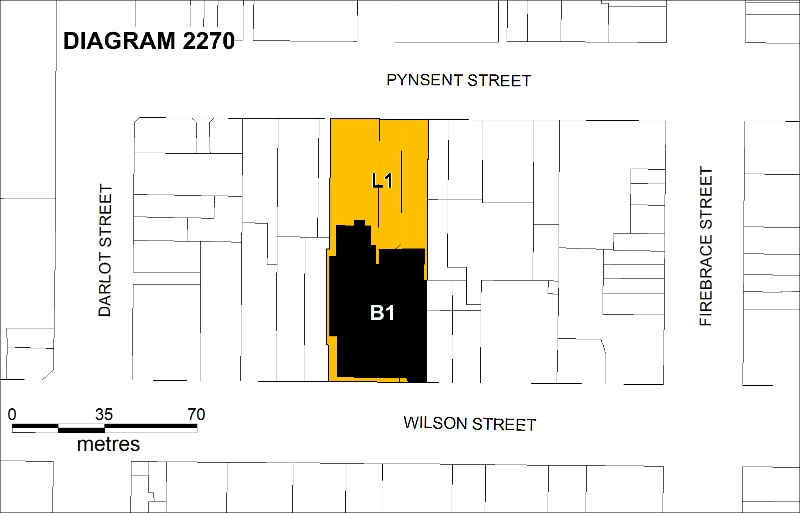 The Horsham Town Hall is a municipal complex built in 1938-1939 and incorporating offices and a council meeting room, an auditorium, a supper room, and an associated tenancy. It replaced an earlier complex, with offices of 1886 and a town hall of 1911. It was designed by the distinguished Melbourne architect Charles Neville Hollinshed (1899-1993), one of Australia's leading theatre designers and an expert in the interior planning and detailing of auditoria and associated spaces. The contract was given to the builder Rupert F Anderson for the sum of £6,500, and the foundation stone was laid on 21 July 1938 and the building opened on 31 May 1939. The building was one of the most important civic complexes built outside Melbourne in the inter-war period, and was the subject of a lengthy article in the Journal of the Royal Victorian Institute of Architects in June 1939 and in the Sydney-based journal Building in August that year. It became the town's premier venue for public functions of all kinds, with the thousand-seat auditorium used for public events such as ceremonies, balls, wedding receptions, fashion shows, art exhibitions, conferences, concerts and trade shows. The offices were vacated in 1980 when a new civic centre opened. In 1983 the Horsham Art Gallery was established in the former offices, and extensions to the gallery designed by Heymann, Kolleger & Beyer Pty Ltd opened in 1999.

The Horsham Town Hall is a two storey brick building in a Stripped Classical style with elements of the Streamlined Moderne and with impressive and intact Art Deco interiors. The building has a facade of textured face bricks, spandrels of Hawksbury sandstone between the metal-framed windows, and darker bricks used for decorative detailing. At the front of the building are the former municipal offices with the council chamber above (now the art gallery), and at the rear are the auditorium and supper room. The former office section has a symmetrical composition, with a central entrance distinguished by the use of Hawkesbury sandstone, surmounted by a balcony and decorated with the municipal coat of arms, with sandstone lamp stands on each side and a simple wrought iron fence across the front. To the east of this main section is the entry to the town hall and an associated tenancy in a Streamlined Moderne style, with a curved corner, ornamental brickwork and banding and original light fittings. The interior retains many notable original Art Deco features, including staircases with wrought iron and Queensland maple balustrades, terrazzo floors, plaster ceilings, doors of walnut veneer with vertical inlaid strips, and original light fittings. The impressive auditorium is largely intact, with a cantilevered balcony with original seating, an ornamental plaster ceiling, original suspended lights with opalescent glazing, and vertical metal-framed windows in the side walls with bracket lighting between. The entrance vestibule to the hall is in largely original condition, with a notable feature being the original Art Deco style ticket office.

This site is part of the traditional land of the Barengi Gadjin people.

The Horsham Town Hall is of architectural and historical significance to the state of Victoria.

The Horsham Town Hall is architecturally significant as an outstanding example of a provincial municipal building of the inter-war period, and as a notable and intact example of the Art Deco style of the late 1930s. Its grand public interiors, including the auditorium, foyers, staircases and supper room, as well as the former council meeting room, are outstanding examples of the style, notable for their moulded plasterwork, terrazzo floors and stairs, the use of anodised metal and polished timber and for the original light fittings. The auditorium is one of the most impressive such spaces in country Victoria. The complex is significant as an important work of the distinguished Melbourne architect Charles Neville Hollinshed, who, after undertaking training and practical experience in London and New York in the 1920s, returned to Australia to become in the 1930s one of the country's leading specialists in theatre design.

The Horsham Town Hall is historically significant as a reflection of the expansion of local government activities in country Victoria in the first half of the twentieth century and as an expression of the civic pride of local communities in the years prior to World War II.