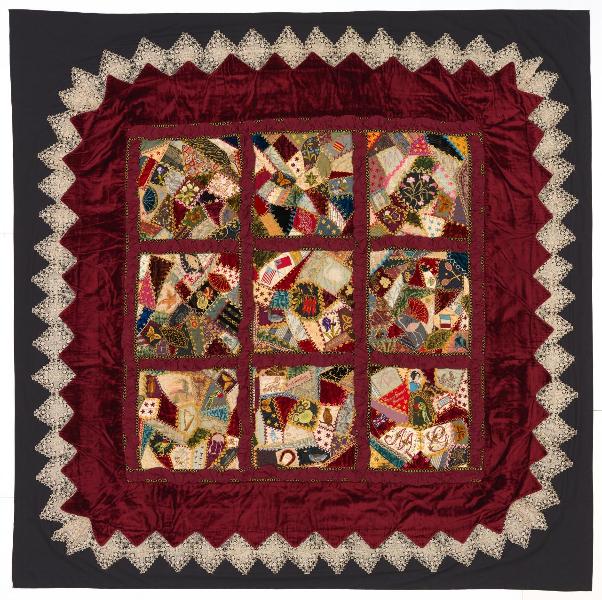 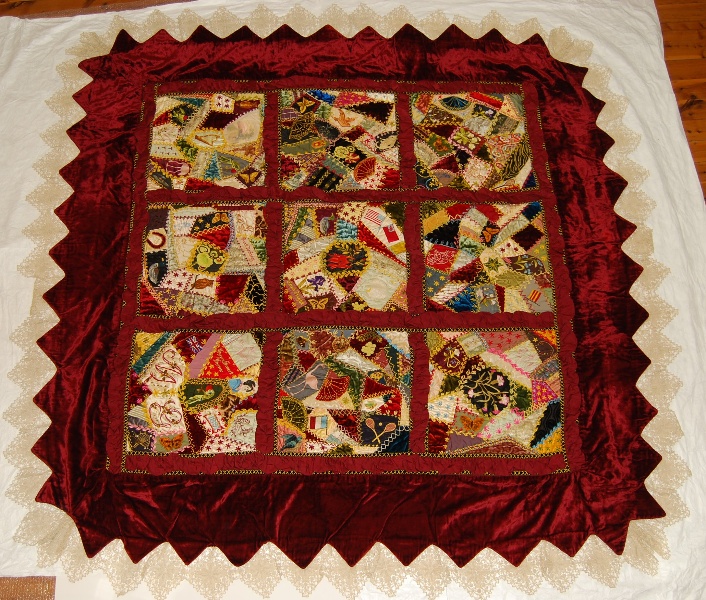 The Marianne Gibson crazy quilt was made between 1890 and 1896 in Wangaratta by Marianne Gibson, the wife of local business man Alexander McCalla Gibson.

The Marianne Gibson crazy quilt consists of nine square blocks each made of 20-30 irregularly shaped pieces of silk fabric giving a total of approximately 200-300 pieces of fabric. The blocks have been machine stitched to each other with narrow, gathered maroon silk ribbon borders and the whole quilt has a wide border of maroon silk velvet with zigzag edges. The backing is shot, honey coloured silk. Linen Guipure lace edging has been attached behind the velvet. The filling is made from raw silk instead of the more usual cotton or wool. This filling silk was likely to have been produced locally by the Victorian Ladies Sericulture Company Limited, a women's venture which operated between c.1872-1892 to promote sericulture as a new industry and as a means of creating income for disadvantaged women.

Most of the fabric pieces of the quilt are hand embroidered with designs incorporating Oriental, botanical, childhood, fairyland and sentimental themes derived from the Aesthetic movement and from more conservative art and design movements. The quilt also includes personal references to Marianne's two dead children. The quilt demonstrates the central place of flowers as a decorative and symbolic theme during the Victorian era where they were used extensively in both sewing and gardening. The Australian images on the quilt such as Sturt's Desert pea flowers reflect the nationalism of the time. The high quality hand embroidery,choice of colours andtextiles usedare typical of the period.

The Marianne Gibson quilt is of aesthetic and historical significance to the state of Victoria.

The Marianne Gibson crazy quilt has aesthetic significance as an outstanding example of the craft of crazy quilting. It is a rare unfaded example of a 19th century quilt and the largest known crazy quilt in Victoria. As a sophisticated artwork in its own right, it is a significant example of a woman's creative self expression in an era where this was restricted to textile arts such as embroidery and quilting. The quilt is a rare surviving example of the colours used in Victorian interior furnishings and demonstrates the rapid spread of the bright colours of the synthetic dyes invented during the Industrial Revolution.

The Marianne Gibson quilt is of historical significance as an important part of the Australian quilting tradition which started in the 1810s and continues today. It is an outstanding example of the highly popular crazy quilting obsession that gripped many leisured women in the United States and Australia during the 1880s and 1890s. This quilt's Australian iconography, personal references and memorialising demonstrates traditions which continue today in works like The Aids Memorial Quilt.
Show more
Show less
All information on this page is maintained by Heritage Victoria. Click below for their website and contact details.