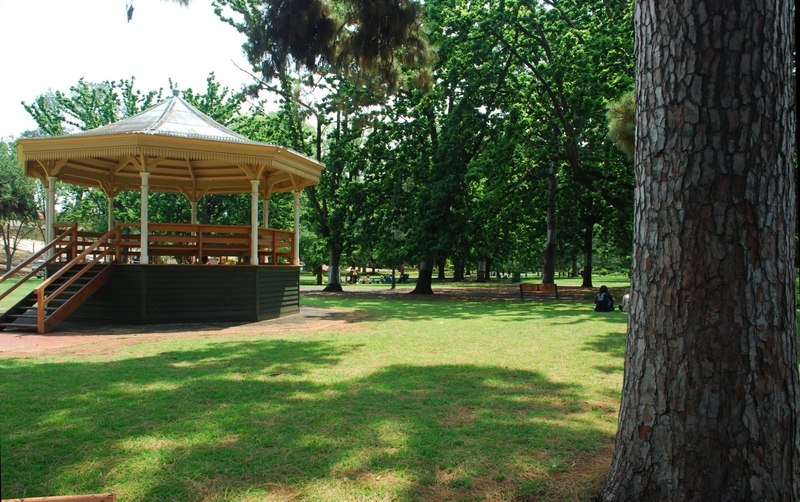 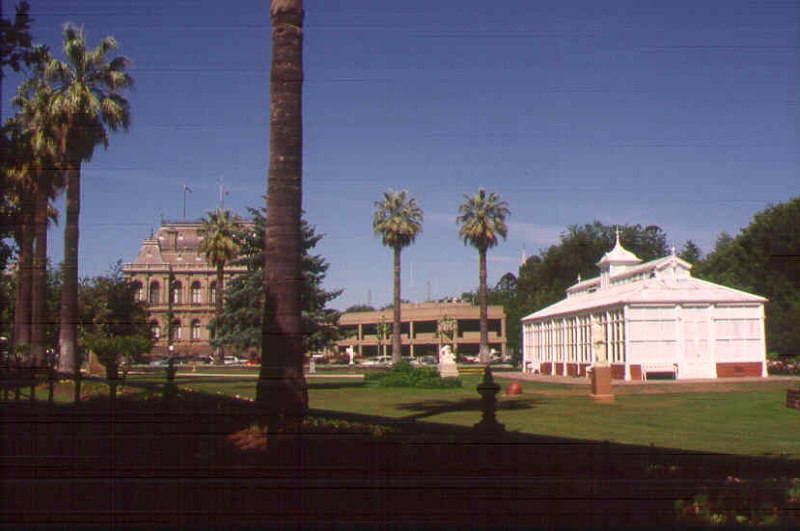 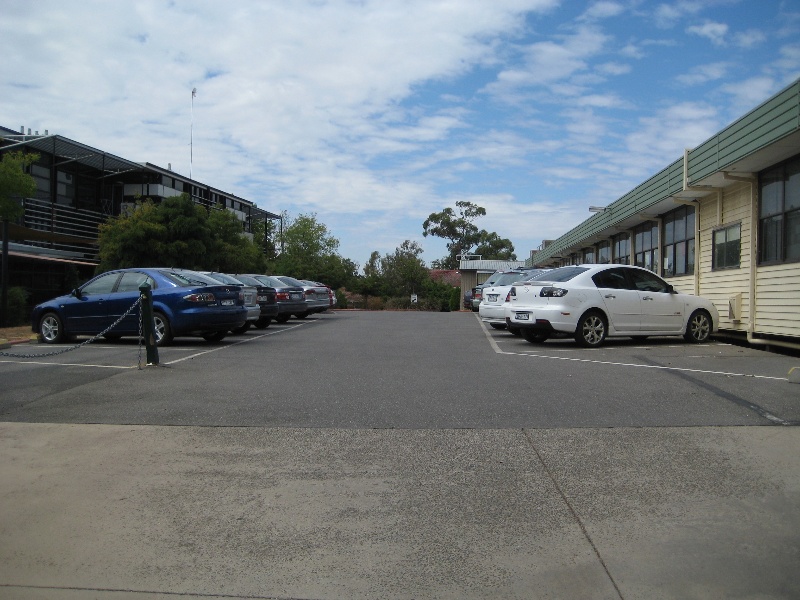 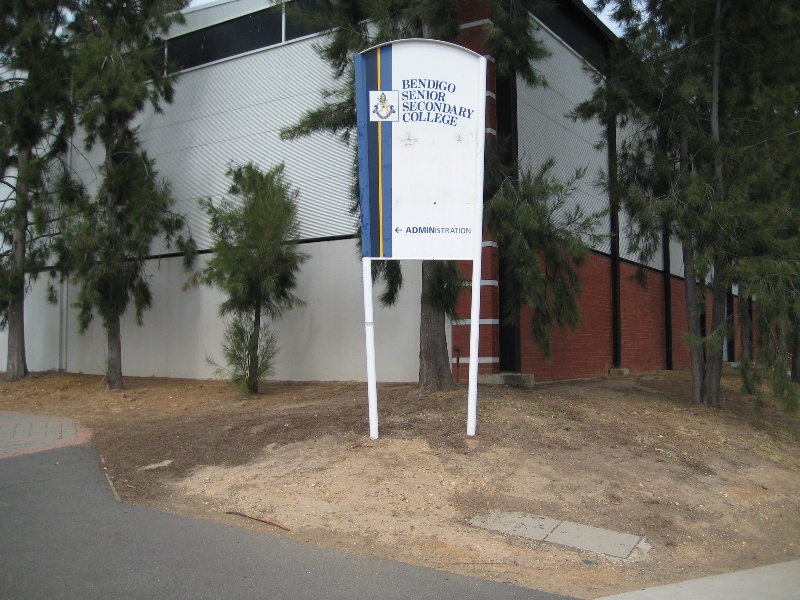 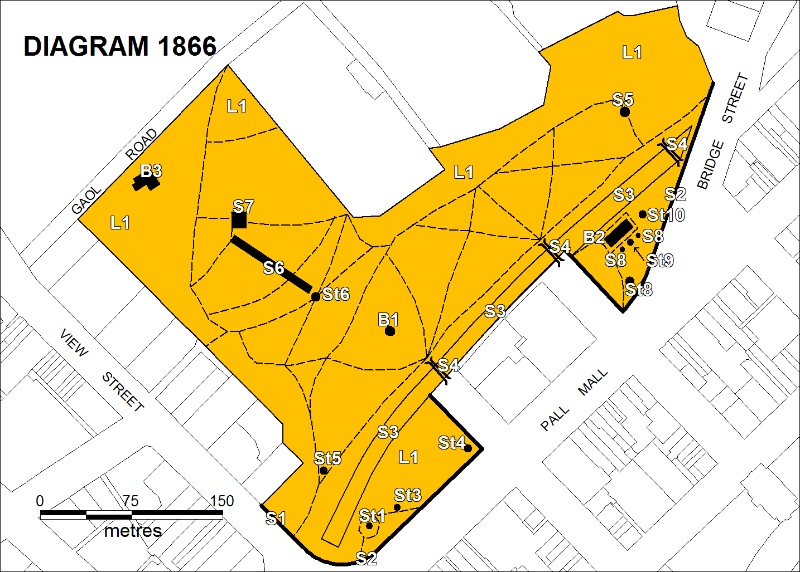 What is significant?
The area known as Rosalind Park (formerly Government Camp Precinct) was first mapped by Surveyor George Urquhart, and designated a Government Camp, in 1852 to serve the local goldfields. The site of the Government Camp Precinct including Commissioner's Gully was bound by View Street, Pall Mall, Bridge Street, Park Road and Barnard Street. A mine was located on the site of the present RSL building just outside the boundaries of this registration. A puddling mill was known to be within the parkland (removed during development of the parkland in the 1860s). Rosalind Park now consists of the land and the contributory elements within the boundaries of View Street, Pall Mall, Bridge Street, Park Road and Gaol Road.

Government camps serving colonial goldfields were typically built on hills or escarpments for surveillance purposes. During the Victorian gold rush, government camps existed in Sandhurst (Bendigo), Ballarat, Beechworth, Castlemaine, Creswick, Clunes, and Back Creek (Talbot), with Bendigo being one of the largest camps. In 1853, the camp was the scene of a large protest by miners upset by the gold mining license fee imposed by the colonial government on mining for gold. In 1856, Gold Commissioner Joseph Panton suggested the idea of transforming the camp of makeshift buildings and reserve into a park, but instead more permanent government buildings were erected. At that time, Bendigo Creek was transformed into a stone lined channel. By the end of the 19th century the 66 acre camp consisted of a police barracks, courthouse, gold office, gaol and lock-up, commissariat store, stables, superintendent's and resident warden's offices and quarters, and other associated buildings.

In 1861, fifty-nine acres of the land were reserved and handed over to the Sandhurst Borough Council. One year later George Brown was appointed first curator. It was during these years that the name Rosalind Park was first used (a reference to the miniature park in Shakespeare's As You Like It). Development continued in the 1870s with the addition of an ornamental fence and numerous plantings, many of which were exchanged with Ferdinand von Mueller for a truck of quartz in large pieces. Samuel Gadd, curator during this time, submitted plans consisting of a network of paths ten feet in width, avenues planted with shady trees, and parkland ornamented with choice specimen trees.

A cascade (designed by local architect William Vahland) and a large fernery were established in 1880. The park includes statues, fountains and a vaulted grotto (which was filled-in some time in the twentieth century and partially re-instated in 1997). Three iron bridges were erected across the creek in 1882, with the Conservatory Gardens laid out in 1886 and a conservatory erected in 1897. Developments in the twentieth century included the erection of the former Garden Gully Mining Company poppet legs on the summit of Camp Hill in 1931 and a number of small community buildings (which were removed in 1995 following the recommendations of the Rosalind Park Redevelopment Plan).

The statuary, which contributes to the aesthetic significance of the park include the: white marble statue of Daphne (1871); Mayor Harness metal sculpture - Man Fighting Wild Animals (1899); white marble statue of Venus (1901); Queen Victoria monument (1903); George Lansell monument (after 1906); Ernest Mueller Bust (1910); Sir John Quick bust (1934); bronze sculpture of George V (1938); James Curnow memorial fountain (n.d.); and Eve (n.d.) Daphne and Eve were purchased in London for the National Gallery of Victoria in 1877 and were de-accessioned and gifted to Bendigo in 1943. The Daphne and Eve statues are currently held by the Bendigo Art Gallery. The Venus statue is currently (2009) undergoing conservation works and is held in the City of Bendigo's storage facility

Plantings, some dating from the 1870s, include avenues of elms, oaks and palms, and fernery, and a fern and palm collection. Significant trees include; Umbellularia californica (the only known example in Victoria); Flindersia australis (one of only three in Victoria); Araucaria bidwillii (near the View Street entrance), Afrocarpus falcata; eight Washingtonia filifera (in the Conservatory Garden); Waterhousea floribunda (near the Queen Victoria statue); and Jubaea chilensis.

Located within the camp, the Queen Elizabeth Oval Cottage was a former public works office constructed in c1858, which related to the operations of the Government Camp. It dates from the colonial government initiative to construct permanent buildings at the camp, when buildings such as the powder magazine and keeper's quarters were also constructed. In the 1890s, as the Bendigo Council sought to improve the Upper Reserve (Queen Elizabeth Oval), a new residence was constructed adjacent to the 1850s building, for the use of the Upper Reserve Keeper. Cricketer and former curator of the Back Creek cricket ground, John Beswick, was appointed to the role. After removal of the Rosalind Park curator's residence (former Powder Magazine) in the early part of the twentieth century, Queen Elizabeth Oval Cottage continued to be used as a residence for the park caretaker.

How is it significant?
Rosalind Park is of historic, archaeological, aesthetic, scientific (botanical) and architectural significance to the State of Victoria.

Why is it significant?
Rosalind Park (formerly Government Camp Precinct) is historically significant as the site of one of the largest government camps in the Victorian goldfields. The open parkland still allows the landscape of the former government camp to be appreciated, and the reconstructed Garden Gully Mining Company poppet legs on Camp Hill reflect the original function of the hill as a lookout and the park as a government camp created to support gold mining activities.

Rosalind Park is historically significant as a significant example of a large, late nineteenth century public recreation reserve. Features which enhance this quality include the interface with the surrounding nineteenth century streetscape, the close proximity of significant government buildings, and the rich overlay of different uses of the park over many years.

The stone-lined Bendigo Creek channel is historically significant for its strong association with gold mining in central Bendigo, and is an important example of late nineteenth century urban infrastructure development.

Queen Elizabeth Oval Cottage is of historical and architectural significance. In terms of historical significance, Queen Elizabeth Oval Cottage is associated with the Government Camp at Sandhurst, which was established in 1851, and was one of the largest government camps in the Victorian goldfields. The former public works office c1858 contributes to an understanding of the role of colonial government in administering the goldfields, and dates from the period when government sought to replace temporary camp structures with more permanent buildings. The office is one of the earliest buildings surviving from the camp (others include the Old Police Barracks 1860, former Supreme Court 1857 and H M Prison Bendigo 1861) and although modest in scale, is important as an example of this early and unusual building type,. The building is one of the oldest in Bendigo.

The caretaker's cottage, which probably dates from the 1890s, is also of historical significance and relates to the post-camp use and function of this area of Rosalind Park. It is associated with the changing nature of the Upper Reserve of the park, when the area was developed into the Queen Elizabeth Oval. The caretaker's cottage, combined with the office, have been associated with the operation and use of this area of Rosalind Park for over 130 years.

Queen Elizabeth Oval Cottage and the caretaker's cottage are of architectural significance as intact buildings of modest scale and simple form and detailing.

Rosalind Park is of archaeological significance for its potential to contain artefacts and deposits associated with the occupation and use as the former Government Camp Precinct during the gold rush in the mid-1800s. It is likely that some archaeological remains and deposits exist, including building remains, cess pits, and rubbish dumps, directly associated with the Government Camp buildings.

Rosalind Park is of aesthetic significance for the retention of its nineteenth century layout, significant garden and landscape elements including water features, bridges, rockeries, gravel paths, garden beds forming two ivy baskets in the Conservatory Gardens, three iron bridges over Bendigo Creek, iron fencing and gates, and the original remnants of the cascade. The statuary contributes to the aesthetic significance of the park.

Rosalind Park is of scientific (botanical) significance for its plantings (some dating from the 1870s), including the avenues of elms, oaks and palms, and fernery, rare trees, and fern and palm collection.

The conservatory in Rosalind Park's Conservatory Gardens is architecturally significant as the State's only surviving example of a nineteenth century conservatory within a public park.