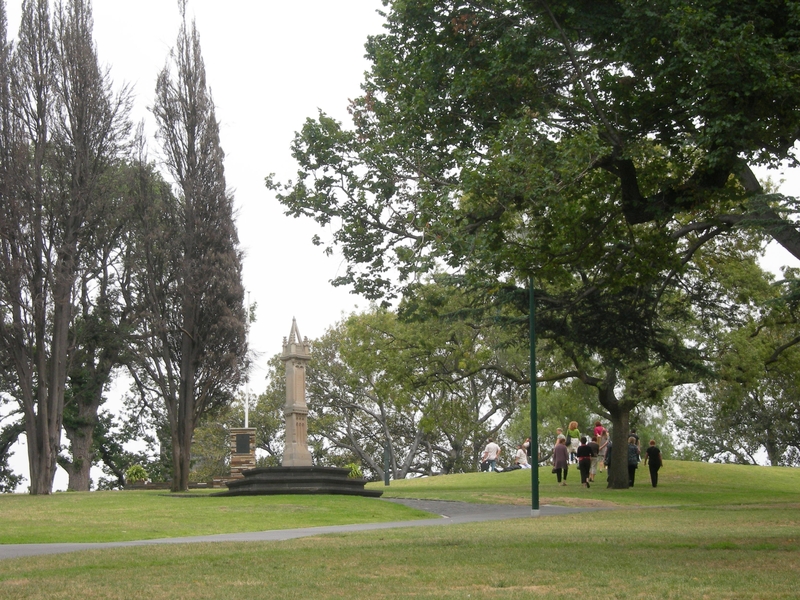 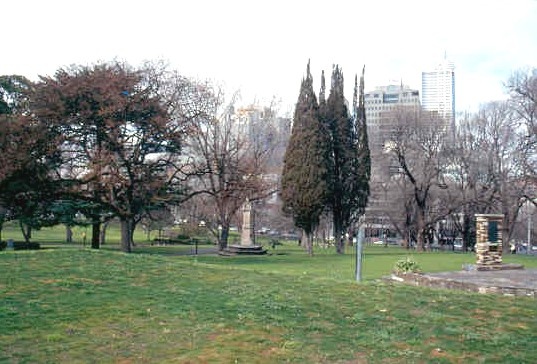 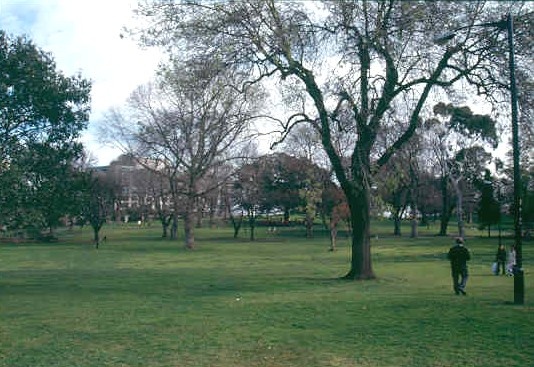 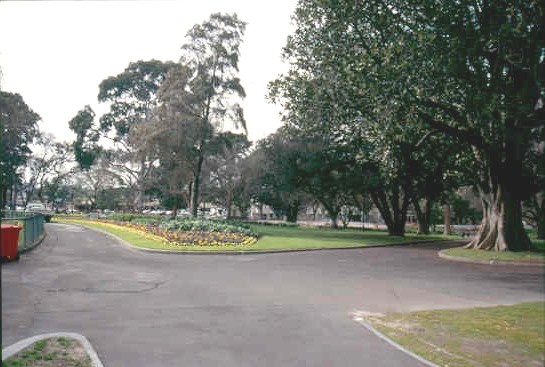 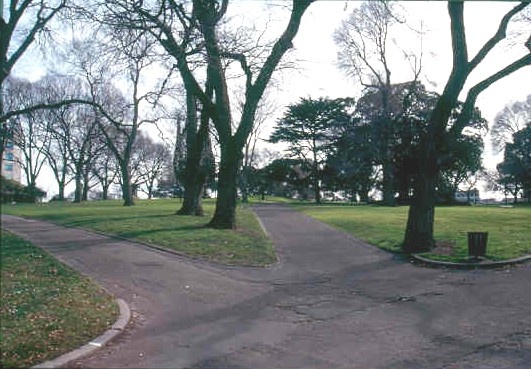 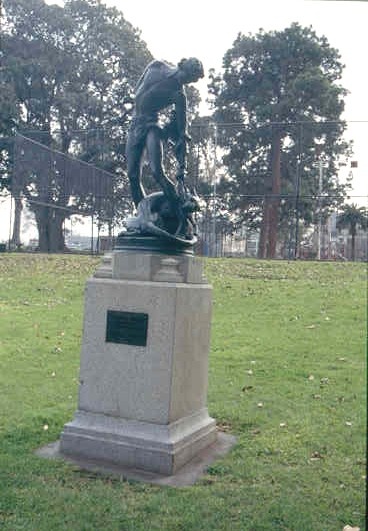 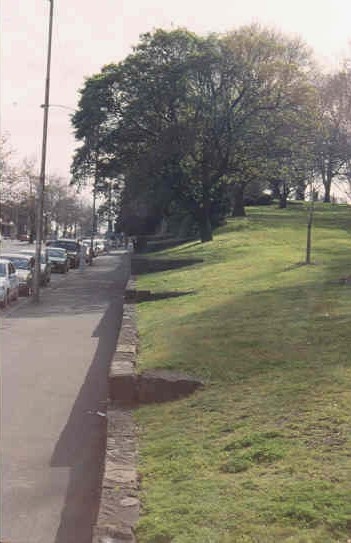 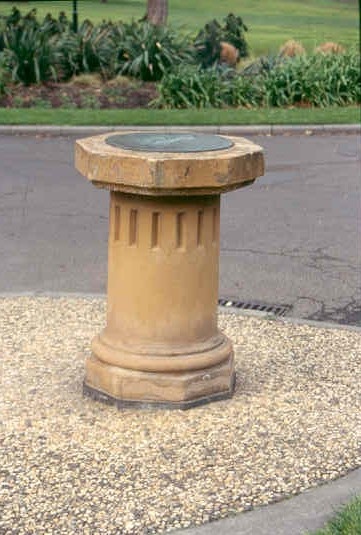 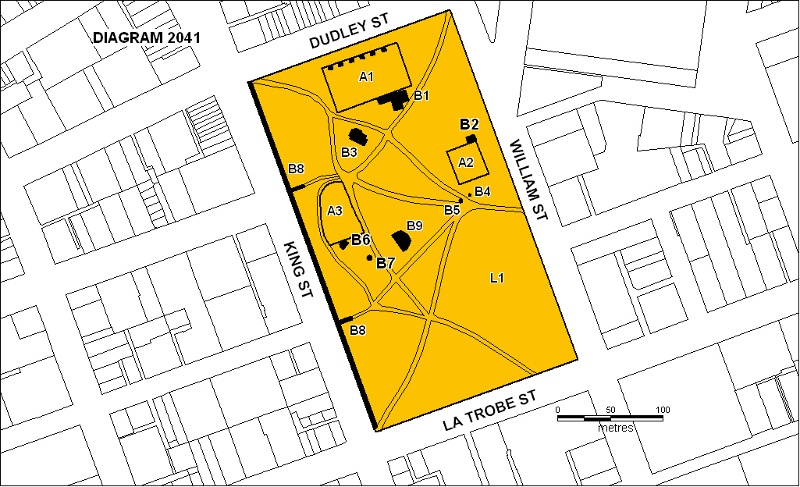 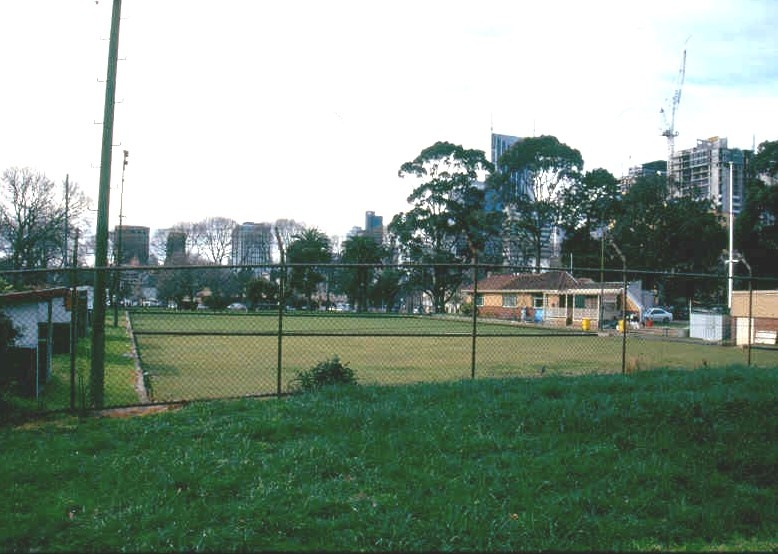 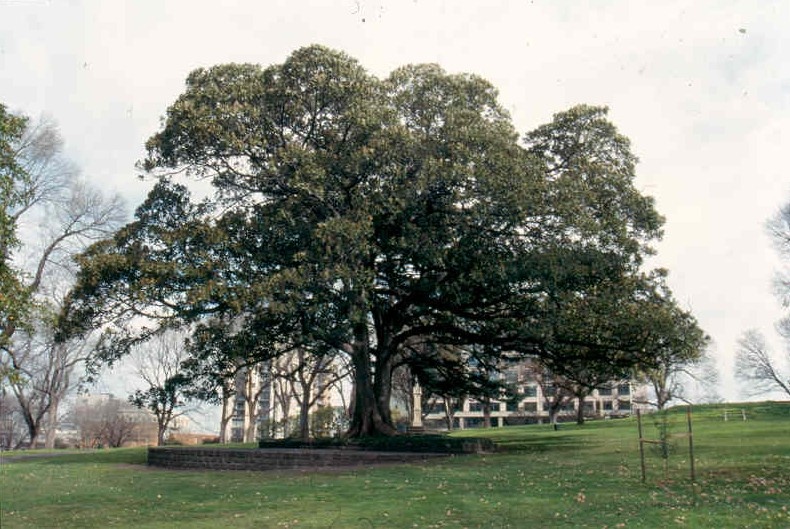 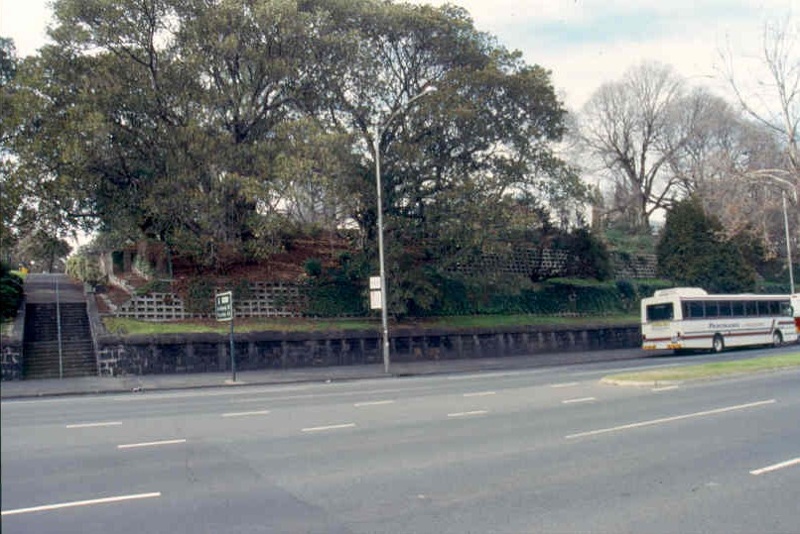 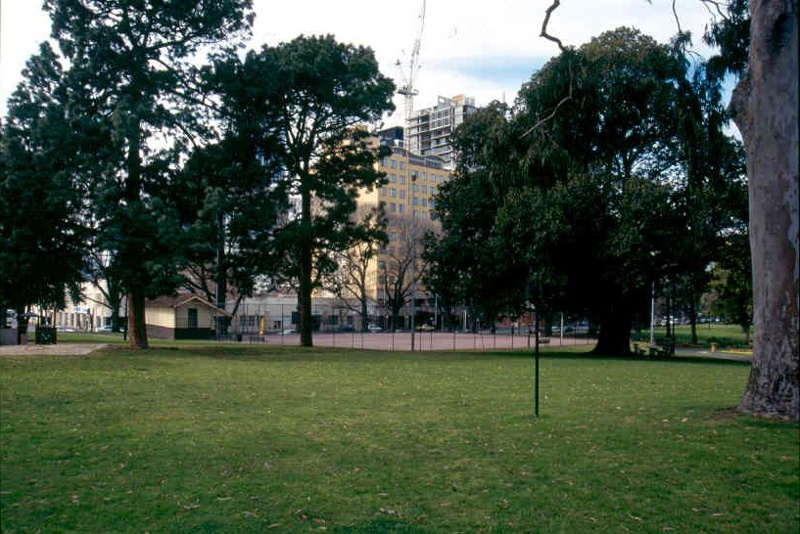 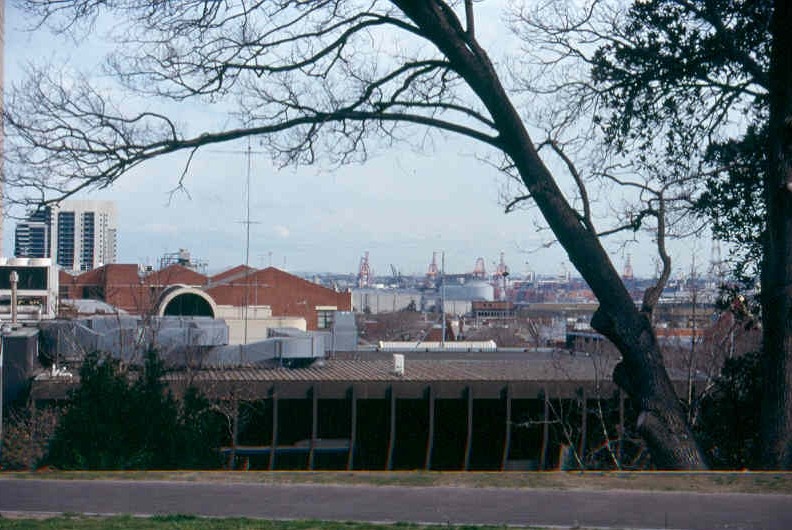 What is significant?
Flagstaff Hill including the Flagstaff Gardens occupies an elevated position to the north west of Melbourne's CBD. Consisting of 7.7 hectares, it was originally called Burial Hill by the European settlers and was used as Melbourne's first burial ground in the 1830s. Later used as a signal station between 1840 and 1857, and then as a magnetic and meteorological observatory under Professor Georg von Neumayer between 1857 and 1862, the hill is a significant archaeological site. In 1862 the site was established as a public garden. Designed in an informal gardenesque style by the Deputy Surveyor General Clement Hodgkinson in1865, and later redesigned by John Guilfoyle in the 1890s, the garden contained numerous trees of scientific and aesthetic importance, many of which remain today. The current appearance of the gardens reflects changes made between the 1890s and the 1920s although the original pathways are still evident as are several of the original tree plantings. Although the character of the gardens has changed since the 1860s, the current appearance reflects a diverse cultural landscape that is rich in horticultural, historic and social meaning.

How is it significant?
Flagstaff Gardens and Flagstaff Hill are of aesthetic, archaeological, historical, scientific (horticultural) and social significance to the State of Victoria

Why is it significant?
Flagstaff Hill is of historic and scientific importance. Between 1836 and 1837, it was the site of Melbourne's first burial ground. Seven burials took place there and as there is no evidence that the bodies were exhumed the site probably has archaeological potential. Between 1840 and 1857 the site was used as a signal station with flagstaff. It was used to communicate with a similar station at Point Gellibrand at Williamstown. Flags flown from the flagstaff indicated shipping arrivals in the Bay and shipping lists were posted on a bulletin board near the station building. Accordingly the hill was a regular gathering place for Melburnians of all classes. The flagstaff and signal station became redundant following the introduction of the telegraph, however the site was then used as a meteorological and magnetic observatory between 1857 and 1862. Established under the supervision of Bavarian scientist Georg von Neumayer, the observatory played a significant part in the development of scientific knowledge in the colony. The footings of the signal station and the observatory buildings probably still exist and would be a significant archaeological deposit.

The Flagstaff Gardens is of scientific (horticultural) and aesthetic significance. Established as a public garden in 1862, the Flagstaff Gardens was designed in the gardenesque style in 1865 by Assistant Commissioner for Crown Lands and Survey, Clement Hodgkinson. Unlike the Fitzroy Gardens, also designed by Hodgkinson, the Flagstaff Gardens was a more informal style. Its path layout was determined in part by the site's topography but also by the location of the Victoria Market in the north-east corner. Some of the original 1860s path layout remains but the current layout reflects changes made between the 1890s and the 1920s. The central path from the main entrance in William Street to the crown of the Flagstaff Hill has disappeared but most of the path that originally crossed the gardens from the corner of King and Latrobe Streets towards the Victoria Market still exists. None of the original statues exist but there is a sundial from the nineteenth century, albeit whose base was reconstructed in 1947, and a sculpture, The Court Favourite, from the 1930s.

There are many fine individual specimens of trees in the gardens including a Holm Oak (Quercus ilex), located on the south side of the William Street entrance,from the first stage of planting in the nineteenth century and which is amongst the largest of the species known in Victoria. There are also significant specimens from the twentieth century including a Maidenhair tree (Ginkgo bilboa) and a Chinese Parasol tree (Firmiana simplex). The Ginkgo biloba is one of the StateÆs finest and largest, and is growing in a prominent position in the garden of the caretakers cottage. The only larger and older Ginkgo biloba in Victoria is in the Geelong Botanic Gardens, which was planted in 1859. The Firmania simplex is rare in Victoria and this tree is also the largest known in the State. As well there are a variety of significant specimen trees including elms, oaks, Moreton bay figs, Canary Island pines and River Red Gums. The Corynocarpus laevigatus is uncommon in Victoria and this tree is the largest known specimen in the State. The two Italian cypresses (Cupressus sempervirens) have important landscape and historical significance due to their association with Melbourne's first cemetery. These trees where commonly planted in cemeteries due to their symbolism.

The Flagstaff Gardens is of landscape and horticultural significance due to the avenues of elms (Ulmus procera and U. x hollandica) lining the pathways through the Gardens and elm rows along the north, north east and southern perimeter of the gardens. The elms are common landscape element in all of MelbourneÆs nineteenth century gardens and boulevards. The trees are numerous and have grown to a large size and are an important feature of the urban character and provide outstanding autumn colour. Melbourne now has some of the finest European elms in the world and these are of increasing international significance as Dutch Elm Disease has killed most of these species in the northern hemisphere. The deciduous elms, poplars and English oaks contrast dramatically with the evergreen conifers, eucalypts, Moreton Bay Figs and palms to provide an outstanding landscape. The two Eucalyptus cladocalyx (Sugar Gum) in the north eastern corner have grown to a great size and are an important landmark in the landscape.

Flagstaff Hill also has social significance as place of recreation and celebration. The existence of the various monuments on the crest of the hill reflects the importance of the site in the popular imagination. In addition, the hill was a natural gathering place in the early years of European settlement because of the views it offered over the Bay. Furthermore, with separation from New South Wales in 1850, the hill was a focus of celebrations with bonfires being lit and other festivities taking place there. In 1950 a monument was built to commemorate these original celebrations.

The Flagstaff Gardens has been the less respectable component in the city's collection of public parks. Accordingly its social significance is different from the Carlton, Fitzroy or Treasury Gardens. In the 1930s it was observed that if the Fitzroy Gardens was the city's drawing room then Flagstaff Gardens was its kitchen. Earlier in the century it was also perceived to be the most notorious of the public parks as a site for illicit activities. This informality and diversity of public behaviour has distinguished it from other city gardens and also is an important part of its character today. The bowling club, playground and tennis courts contribute to its continuing recreational and informal character. To an extent its character has also been defined by its position on the west side of the city close to the Victoria Market, working class residential areas, industry and Yarra wharves.