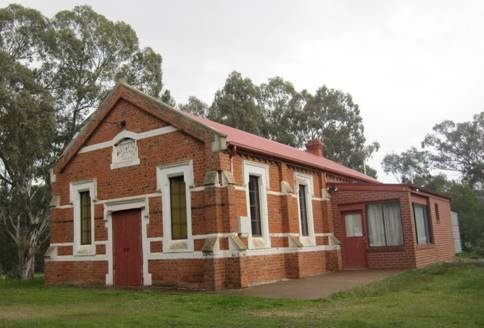 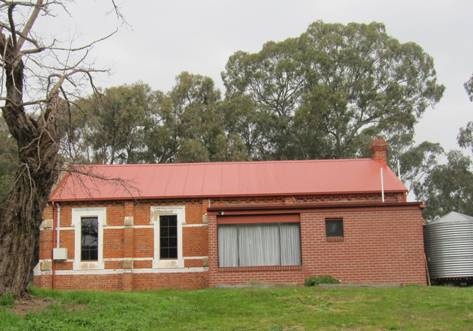 The former Wesleyan Church (built 1872), now Uniting Church, at Lockwood South is a small polychrome brick church located on a broadly square allotment on the west side of the Calder Alternative Highway. Stylistically, it combines Classical-Renaissance and Gothic traditions. The church has a hipped roof clad in corrugated iron, with gable ends, and external walls of orange/red brick, with umber brick string courses and cement rendered string-course dressings which connect the flat-arched windows and doorways with square hood moulds in a Collegiate Tudor manner. The windows are rectangular with thick and emphatic surrounds, a treatment which similarly surmounts the main door. The external walls are also divided by buttresses, which merge into the wall piers; and there is a cartouche reading 'Wesleyan Church AD 1872' at the top of in the east gable end which is the main entrance elevation. The church occupies an informal open setting, typical of many historic churches in rural areas, albeit enhanced by the row of conifers which also help give the property a sense of seclusion.

The former Wesleyan Church (built 1872) on the Calder Alternative Highway at Lockwood South is of local historical, social and aesthetic/architectural significance.

The former Wesleyan Church is of historical significance (Criterion A) for its capacity to recall the presence in the Lockwood area of Methodist sects, going back to the earliest years of the gold rushes. The sects were well represented in the former Marong Shire, reflecting the presence of Cornish miners in the district. Regular Methodist services were held in Lockwood from 1854, with a Wesleyan presence in the settlement dating to at least 1859 with the establishment of the Wesleyan Independent Church School. The current building of 1872 demonstrates the ongoing presence of the Wesleyans in the community in this period, through the provision of a chapel for services and a school/classroom facility. When viewed by passing traffic on the Highway, the church in its grounds also provides a reminder of the historic presence of religious denominations on the goldfields. The church is also of social significance in the local context, as the focus of the Uniting Church congregation, and for being part of the Golden Square circuit (Criterion G). Architecturally (Criterion E), the church is significant as a substantially intact example of a small polychromatic brick church of the early 1870s. The combination of Classical-Renaissance and Gothic traditions creates a distinct Tudoresque effect, expressed in the flat-arched windows and doorways with square hood moulds. These influences are also unusual in the Greater Bendigo context (Criterion B). The fusion of the gable fascia with the flanking piers to the front (east) elevation is a device that recurs elsewhere in mid-nineteenth-century Victoria and suggests a sense of strength and robustness. The simple and informal setting of the building, combined with the screening conifer row, also contribute to the aesthetic significance of the property.