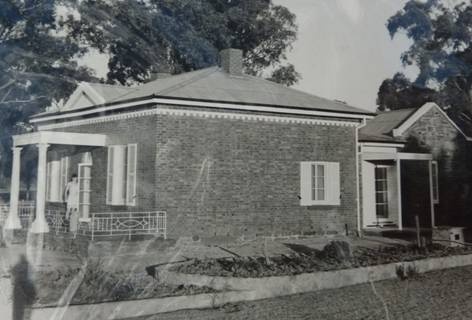 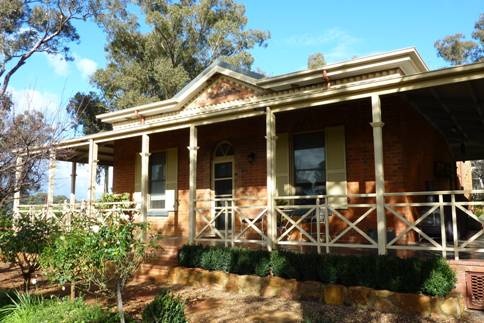 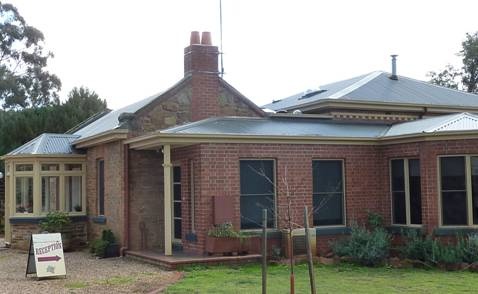 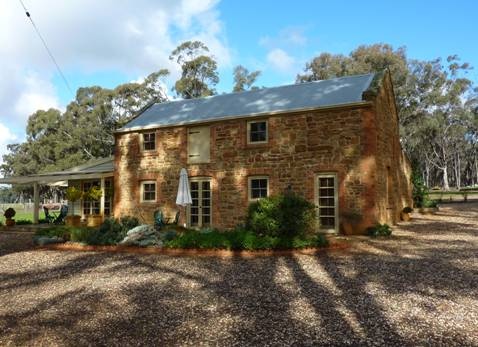 Byronsvale (previously Turand) is located on Andrews Road to the south of Maiden Gully, and is accessed via a driveway from Andrews Road. The property includes the main north-facing house, two-storey sandstone stables, a former dairy and modern outbuildings, and vineyards which provide a fine northern aspect from the house. The house was built in two principal stages, 1872 and c. 1880s, with additions and alterations in the early 2000s. The 1872 component at the south of the house is a narrow gable roofed bay composed of random (irregular) coursed rubble stone. The larger 1880s addition to the north is of red brick on sandstone footings and plinth with a hipped roof of painted, corrugated galvanised steel. The south elevation of the 1872 wing is symmetrical, with a central facetted porch (built early 2000s) and parapeted gable ends with a simple brick chimney to the east. The north elevation of the 1880s brick wing, also symmetrical, has a central gabled pediment and a frieze below the eaves line of ornamental brickwork. Below this again is a new verandah (early 2000s) which returns to the east and west elevations, and an 'X'-patterned timber balustrade. The c. 1872 former stables (now accommodation) to the south-east of the house is a two-storey gable-roofed sandstone building; the gable ends have parapets with quoins formed from multiple brick courses. The stone is in random (irregular) courses nearer the ground and gradually loses course definition higher up, much like the 1872 component of the house. The building has been extended to the east and south. A mud brick former dairy is located to the west of the stables. It has a new roof, door, fascia, roof posts, render and over painting.

Byronsvale is set in an extensive open landscape, with associated vineyards to the north and woodland to the south.

Byronsvale on Andrews Road to the south of Maiden Gully is of local historical and aesthetic/architectural significance.

Byronsvale, the original and early components of which date to the 1870s and 1880s, is historically significant (Criterion A) as an early surviving farm house complex in the district, recalling the area's long history of agricultural production supplying the Bendigo market. The property, including its evolved form and substantial stables complex, helps demonstrate aspects of the lifestyle that could be attained with wealth founded on gold. Byronsvale is also significant for its association with the first owner, successful miner, entrepreneur, local politician and State parliamentarian of some standing, David Chaplin Sterry (1832-1904) (Criterion G). Sterry acquired land at Myers Creek (Maiden Gully) in 1867 and also commissioned the Goldmines Hotel at the Marong Road, Ironbark, near the Victoria Reef. Architecturally (Criterion E), the earliest components, being the south wing of the house and the stables, are elegant stone structures which form a distinctive combination; the stables also rival the house in size. The c. 1880s addition to the house transformed it into a villa of some substance and included some architectural flourishes such as the central gabled pediment and frieze of ornamental brickwork. The house and stables are substantially intact to their periods of construction, while the various additions do not significantly detract from an appreciation of the original building forms. The relationship between the house and stables is also important and helps demonstrate the earliest layout and function of the property. The current setting, with vineyards to the north and woodland to the south, additionally enhances the presentation of the property.