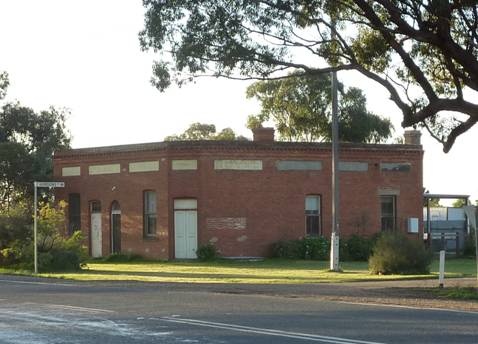 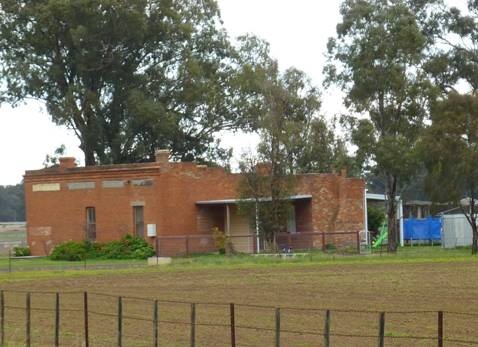 The former Royal Hotel is a single storey red brick hotel with a splayed corner. It is located on the Loddon Valley Highway, and also addresses Three Chain Road to the south. These elevations have narrow setbacks from the property edge. The splayed corner, which faces directly south, retains its original paired timber door leaves. There are two window openings to each of the principal elevations, at irregular intervals. These are double hung sashes, with two panes per sash. The original window and door openings have cambered brick soffits. Works have been carried out to the easternmost window on the Three Chain Road elevation, including a new lintel. However, the timber window frame appears original. There are also two door openings to the elevation facing the Loddon Valley Highway, an opening with a cambered soffit, timber door and highlight, and a later round headed opening to its south. At the top of the two walls are recessed cement cement panels, with the words 'Royal' and 'Stabling' legible. The parapet has a simple stepped cornice and frieze with brackets formed by brick ends. There are two short brick chimneys, unrendered.

The former Royal Hotel is of local historical and aesthetic/architectural significance.

The former Royal Hotel at Woodvale, on the Loddon Valley Highway north of the Riley's Road intersection, is of local historical and aesthetic/architectural significance. Historically (Criterion A), the hotel replaced a fire damaged predecessor and as such continued an earlier hotel operation on this site in a general locale (Woodvale) where at least 12 hotels have been documented over time. The offering of stabling in 1912 (removed) also provides evidence of the enduring importance in country areas of horses as a means of transport; this in turn led to a demand for hotels and stabling at frequent intervals on the road network. The isolated former Royal Hotel is approximately 1km from the former Old House at Home Hotel and is one of several hotels that formerly existed on the Loddon Valley Highway within a 15km stretch. In terms of the aesthetic/architectural significance (Criterion E), the former Royal Hotel is a largely externally intact hotel of the early twentieth century, albeit one which is essentially Victorian in character, taking its stylistic and presentational cues from the established Bendigo hotel typology of the nineteenth century (Criterion D). These include brick constructions of low, spreading proportions with splayed corners, simple recessed parapets and no verandahs. In this regard, the former Royal Hotel also parallels a number of other historic surviving single-storeyed hotels in the former Rural City of Marong, and retains the capacity to demonstrate its original function. The recessed cement panels at the top of the walls are an unusual feature. The location on the Loddon Valley Highway, at the intersection with Three Chain Road and Rileys Road, also provides a high degree of prominence to the historic building in the flat and generally open surrounding landscape.