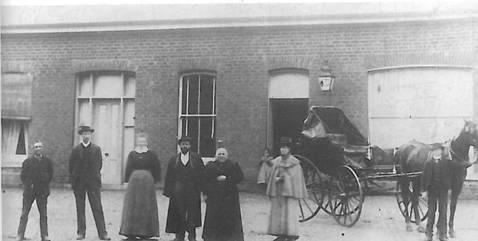 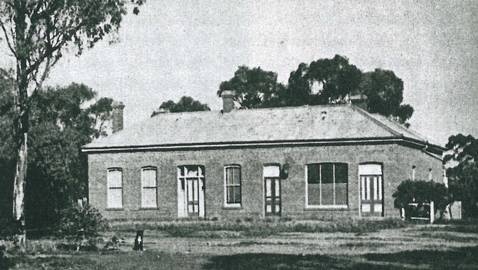 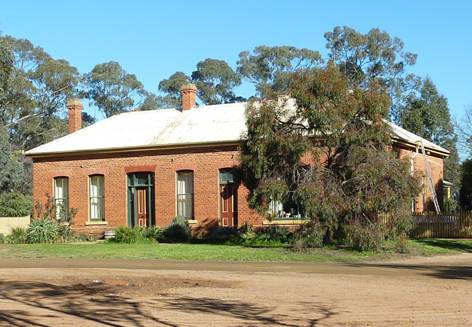 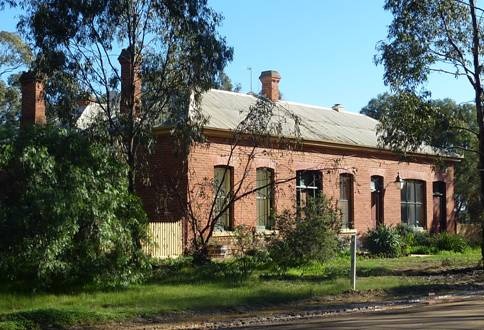 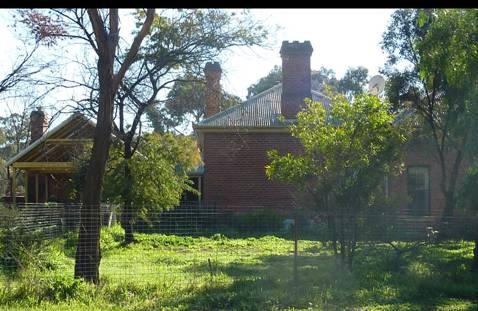 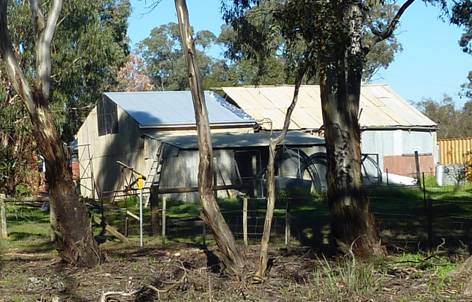 The former Camp Hotel and Store, built 1868 is located in an isolated woodland setting at the intersection of the unsealed Neilborough-Eaglehawk Road and Camp Road, Woodvale. It is a single-storey building constructed in exposed red brick, with a twin hipped roof form and four brick chimneys. The walls have a sandstone base, with granite thresholds and cement window sills. The east elevation has seven irregularly-spaced openings, three doors and four windows, all with cambered brick soffits. Two of the doors are standard width with fanlights; the third has a fanlight and coupled sidelights. The number of doors reflects the original uses of the building, incorporating the hotel, store and also presumably a residence. The windows are double-hung sashes with two panes per sash. There are a number of barns and outbuildings to the north of the hotel and a red brick toilet to the west (rear). The former hotel and store appears in excellent condition. Externally, it is also predominantly intact as built.

The former Camp Hotel and Store is of historical and aesthetic/architectural significance. Its association with a prominent local designer is also significant.[i] The property is of at least local significance and may be of significance in the State-wide context.

It is historically significant (Criterion A) as a hotel and store built to serve the substantial mining population present at Sydney Flat from the early gold rushes. The existing brick structure replaced an earlier (1857) slab hut construction. The survival of this building, which has a high level of intactness, in its isolated setting at the intersection of two unsealed roads in the heart of the Whipstick forest is evocative of the goldfields conditions. It is also one of very few surviving nineteenth century brick buildings in the Whipstick, the only surviving former hotel on the Neilborough-to-Eaglehawk Road, and a well known local landmark. The survival of outbuildings, one of which may be a stable, provides evidence of the importance of horses as a means of transport, which in turn led to a demand for hotels and stabling at frequent intervals on the road system. It is also possible that the outbuildings and the Morewood and Rogers tiles to the metal lined shed date to the earlier 1850s Camp Hotel, built under the ownership of the original proprietor, Mary Deeming.

The former Camp Hotel and Store is also of aesthetic/architectural significance (Criterion E) as a highly intact and substantial 1860s brick hotel, which retains its original 1860s presentation to the Neilborough-Eaglehawk Road, and its setting within the Whipstick. The single-storey red brick construction demonstrates key characteristics (Criterion D) of gold rush era hotels in the Bendigo region, including the height-to-width proportions, single-storey form, rectilinear plan, sequence of multiple doors interspersed with sash windows, brick corbelled chimney cornices and simple block sills. The number of doors reflects the original uses of the building, incorporating the hotel, store and also presumably residence. The hotel's picturesque setting in isolated country enhances its aesthetic qualities. The association (Criterion H) with Irish architect Robert A Love is also significant. Love was a prolific designer in the Bendigo and Stawell regions during the 1860s, and was responsible for a number of churches, halls, the Bendigo Benevolent Asylum and the Anchor Brewery. He was also one of the first architects to use cavity wall construction in Australia, but not necessarily in relation to the subject building. Modifications and additions to the Camp Hotel have generally been located to rear, with minimal impacts on the principal facade and its historic presentation. The lantern to the east elevation, which may be original, is a signifier of nineteenth century hotel buildings.