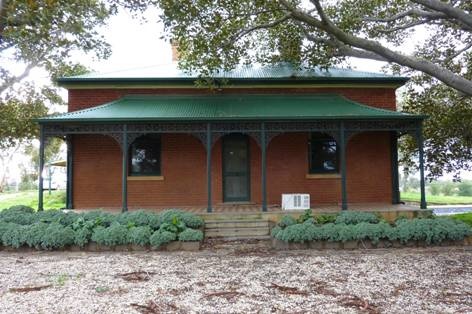 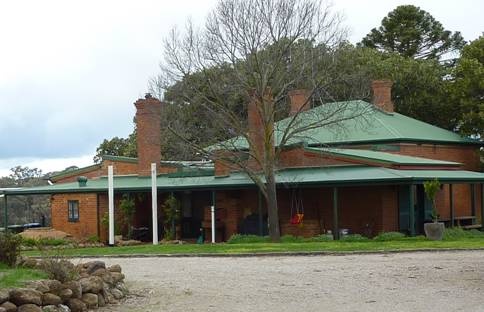 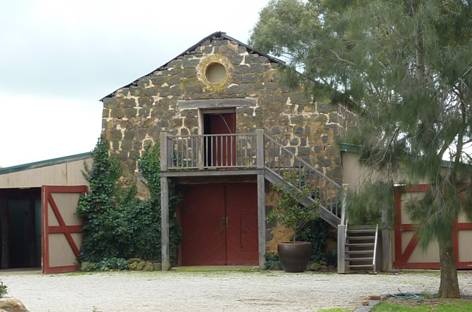 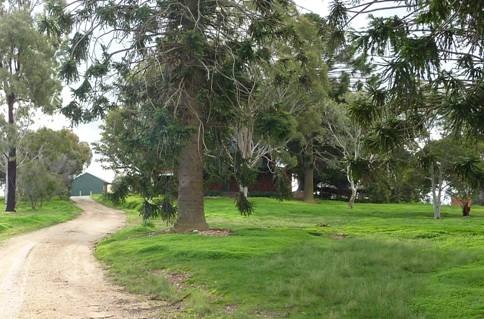 The mid-Victorian farm complex at 550 McKenzie Road, Marong includes a single-storey red brick villa, a two-storey bluestone store/barn and mature trees in a landscaped garden to the south. The brick dwelling (c. 1870s) is square in plan and built on bluestone base walls. The south elevation (principal facade) is symmetrical, with a central door flanked by a window to each side. The windows are double-hung sashes, and there is a timber-post verandah, with concave roof, timber frieze rail and grapevine lacework. To the rear of the house is a substantial gable-roofed two-storey bluestone barn (c. 1850s) whose east and west walls are battered. The loft is accessed by an external timber staircase and entered by a timber door surmounted by a long timber lintel. Additional elements at the site include single-storey skillion-roofed additions to the east and west of the barn, and two gable-ended steel clad sheds, which form a complementary group of working/storage buildings. The mature trees in the landscaped garden at the south of the property include Monkey Puzzle trees and Moreton Bay figs.

The farm complex is of local historical and aesthetic/architectural significance.

The farm complex at 550 McKenzie Road, approximately 5km south-east of Marong, is of local historical and aesthetic/architectural significance. The property is of historical significance (Criterion A) for its associations with early settlement at Woodstock on Loddon, and for its capacity to demonstrate aspects of the agricultural and pastoral practices of Michael Bourke, a local politician and major dairy, meats and wine producer in the Bendigo hinterland from the late-1850s. The significance is enhanced by the survival of the unusual bluestone barn/store, believed to date to the late-1850s. The combination of house, barn and mature trees, all dating from the Bourke period of ownership and operation, is additionally of note. The property is also of aesthetic/architectural significance (Criterion E). The red brick house is a largely intact example of a simply detailed mid Victorian villa, with a steeply pitched hipped roof, symmetrical facade, timber-post verandah with concave roof, and grape motifs to the cast iron verandah lacework which refer to the viticultural activities of the historic property. The 1850s gabled bluestone barn is a comparatively rare example of this type of structure in the area with its battered walls and two storey massing (Criterion B). The building is enhanced by its stone construction, double sliding timber doors, oculi in the centre of the south facing gable, and loft with external access. The mature trees in the landscaped garden setting, including Monkey Puzzle trees and Moreton Bay figs, further enhance the aesthetic significance.