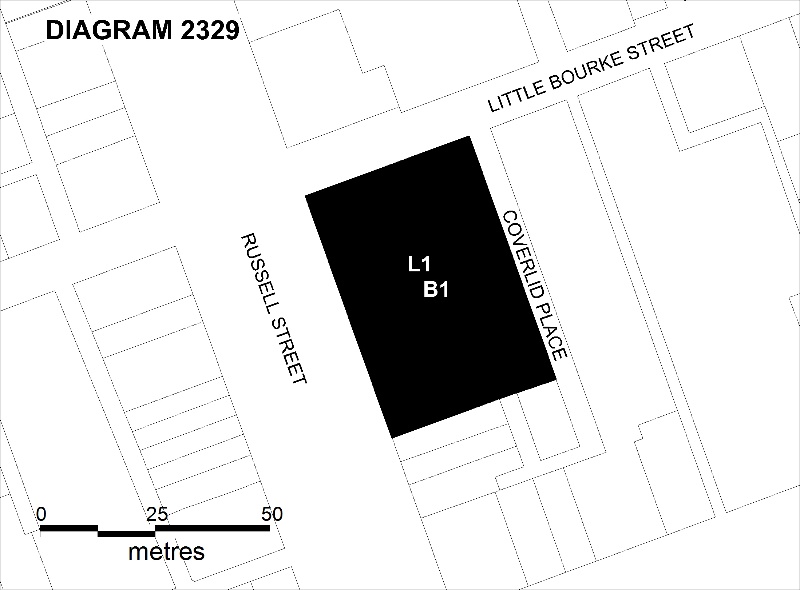 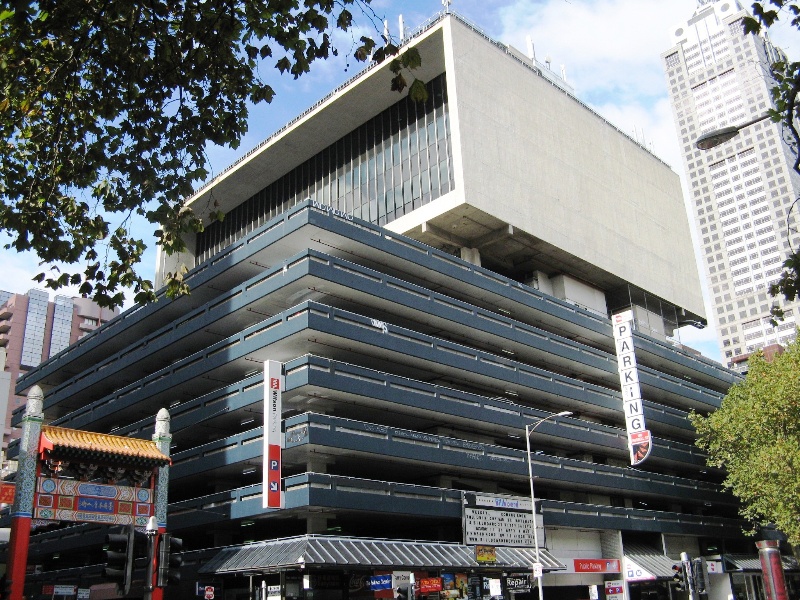 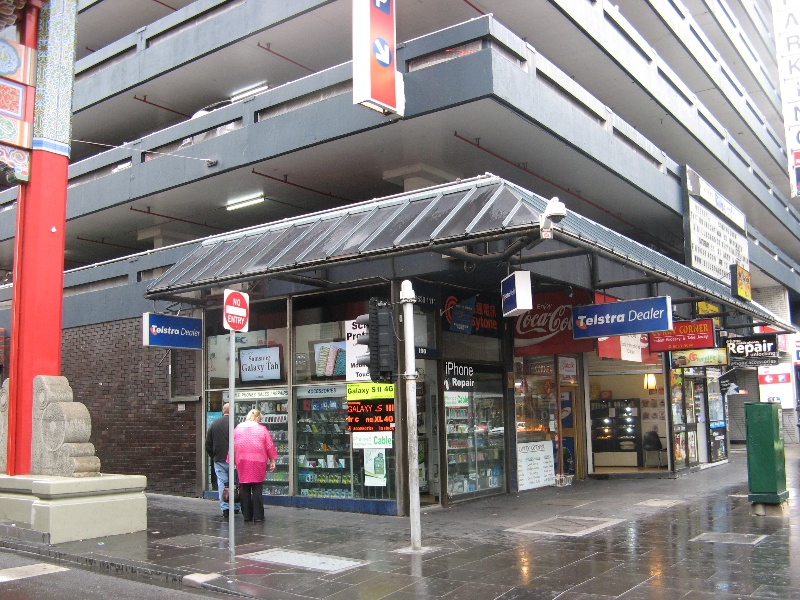 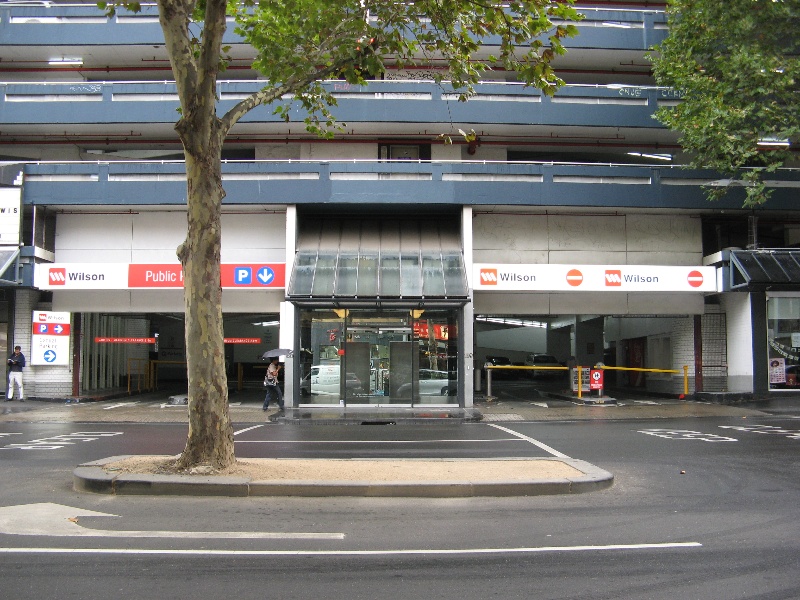 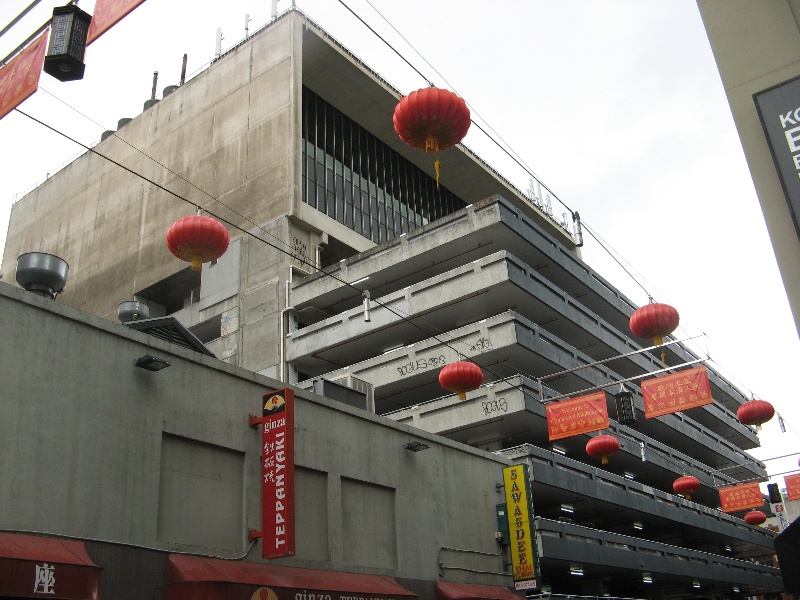 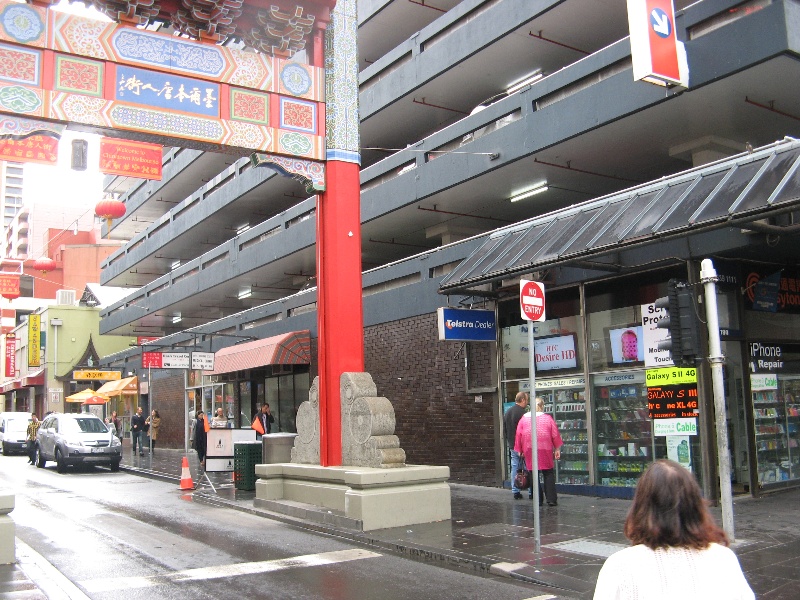 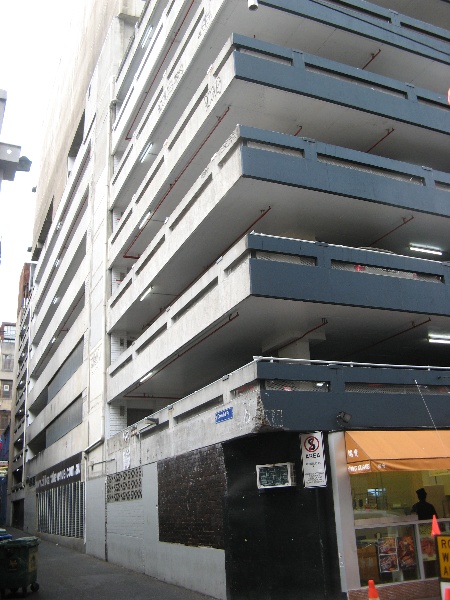 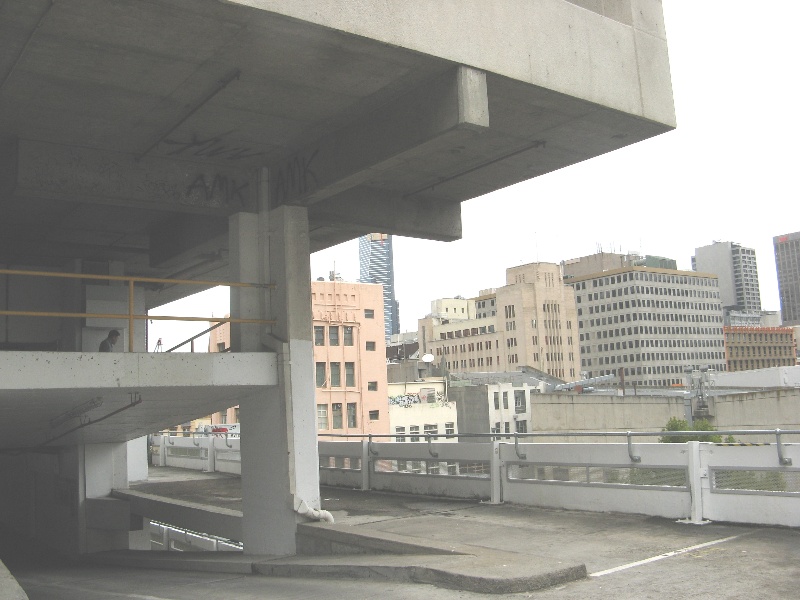 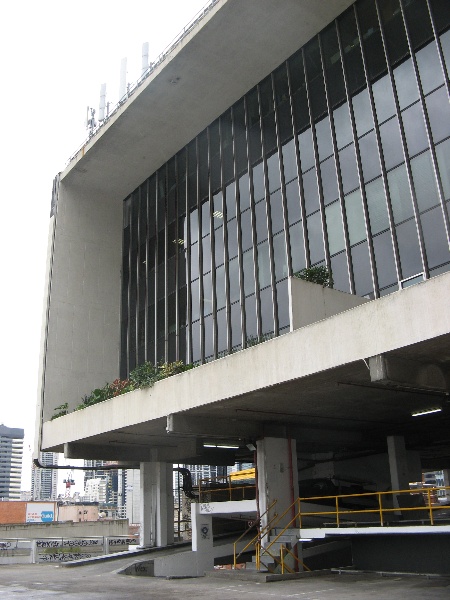 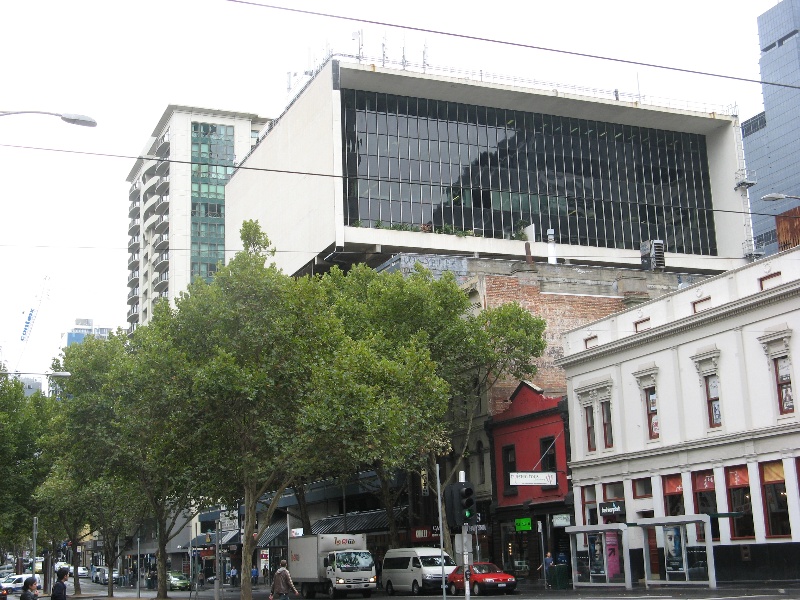 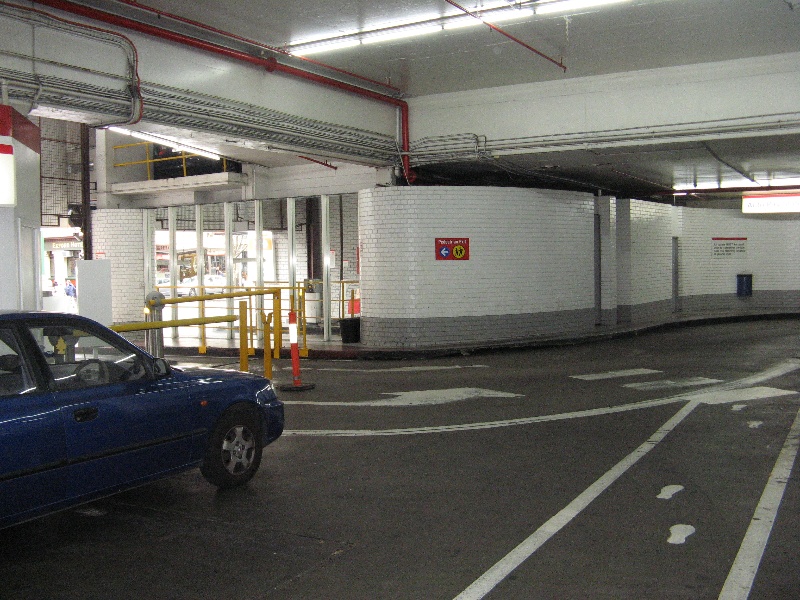 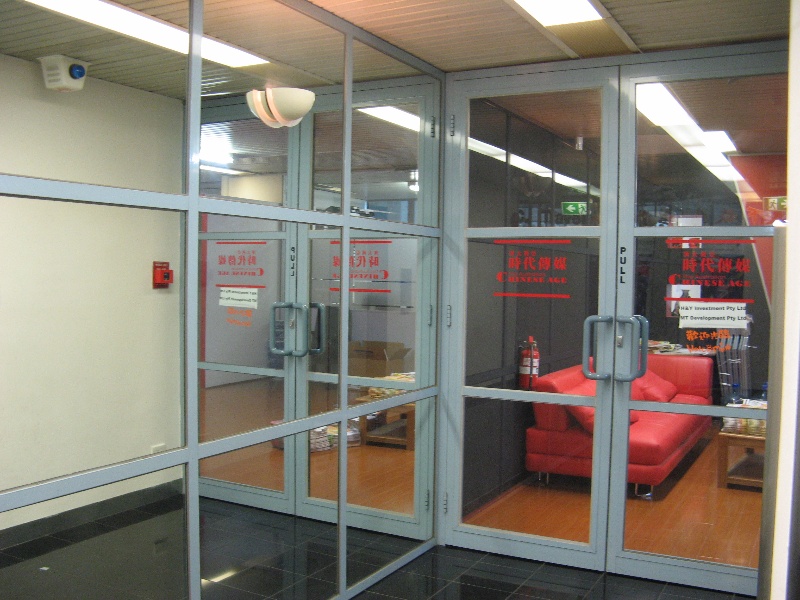 What is significant?
Total House, built in 1964-65, comprises the Total Car Park, shops at ground level, the Total Office Building and a theatre in the basement.

History Summary
Total House was one of a number of multi-storey car parks buildings constructed in the City of Melbourne in the 1950s and 1960s in response to the massive rise in car ownership during the post-war period. In 1955 the City of Melbourne recommended that parking stations be established on every city block. The site of the future Total House was purchased in 1959-61 by the City of Melbourne and tenders for a new car park were advertised in 1962. The new building was designed by the architectural firm of Bogle & Banfield Associates, a partnership of Alan Bogle (1902-76) and Gordon Banfield (1922-2007). The developer of Total House was the Savoy Car Park Company, which was controlled by Gordon Banfield, who owned or developed many car parks and entertainment venues in the city in the 1960s and 1970s. The name of the building derived from one of the building's tenants, the French company Total Oil Products P/L (Australia), which occupied the whole of the tenth floor of the building from 1966 until at least the mid 1970s.Total Houseis one of the earliest examples in Victoria of the Brutalist style, which incorporated ideas of integrity in the expression of materials, structure and function, and gave rise to dramatic building forms. Brutalism dominated construction in post-war Japan, and details of these buildings were widely published and admired by western architects: in Australia Robin Boyd published a monograph on Kenzo Tange in 1962. At this time many Australian architects visited Japan. The design of Total House shows a strong Japanese influence. In the basement of Total House was the luxuriously-appointed Lido nightclub, the first of its kind in Victoria. Most of the shop fronts and the entry to the offices were altered in the 1980s or 1990s, with glass canopies added at this time.

Description Summary
Total House is a Brutalist style reinforced concrete building with shops on the ground floor along Russell and Little Bourke Streets, seven elevated parking decks above, four levels of offices with a smaller footprint elevated above the top deck, with a theatre in the basement. The car park levels are utilitarian in design, with supporting columns inset from all edges so that from the street they appear as floating platforms dominated by the balustrades, which are divided by long slots and give a strong horizontal emphasis. The elevated office block takes the form of an almost solid box open to the north and south with protruding frames around deeply inset curtain walls. It is supported above the top deck on cruciform columns and beams at the corners, allowing it to appear virtually unsupported in views from the ground. When built the concrete was unpainted as on most of the laneway elevation, but the exterior of the car park was painted blue in the 1980s. Panels of dark brickwork were once a feature of the exterior and interior of the ground floor but apart from two sections along Little Bourke Street these have been painted white.

How is it significant?
Total House satisfies the following criterion for inclusion in the Victorian Heritage Register:

Criterion A Importance to the course, or pattern, of Victoria's cultural history
Criterion D Importance in demonstrating the principal characteristics of a class of cultural places and objects

Why is it significant?
Total House is significant at the State level for the following reasons:
Total House reflects the massive increase in car ownership in the post-Word War II period and the infrastructure developed to accommodate the large numbers of cars in the City of Melbourne. The construction of off-street car parking facilities became essential to the economic well-being and growth of the Central Business District to relieve congestion and provide access for shoppers and businessmen. (Criterion A)

Total House is a landmark of post-World War II modernist design and is one of the earliest and best expressions of Brutalist architecture in Victoria. Brutalism incorporated ideas of the integrity of expression of materials, structure and function. Total House reflects these ideals in differentiating the functional parts of the building and the 'honest' display of its materials and structure. Total House is also an outstanding example of Japanese influence on architecture in Victoria in the post-war period. Until then local architects had been inspired largely by the buildings of Europe and the United States, but the innovative Brutalist concrete architecture of post-war Japan was widely admired and published in the west, and inspired Australian architects to visit Japan at this time to research its architecture and landscapes. (Criterion D)