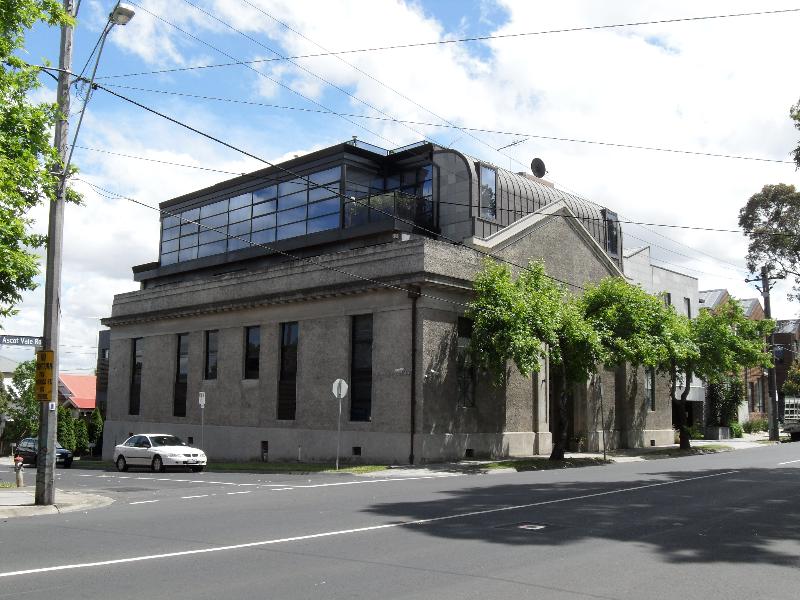 What is significant?
The former 'D' Ascot Vale Sub-station, designed and constructed by the State Electricity Commission of Victoria (SECV) in 1922-23, at 21 Ascot Vale Road, Flemington is significant. It is a 1920s Greek Revival building.The walls are of roughcast render with smooth render to the base and in a band underneath the cornice, which is dentilated. The symmetrical facade has a large triangular pediment above the recessed central bay that contains the large entry, which is framed with a panelled aedicule of smooth render. The flanking bays on either side have the original tall metal-framed windows with a Greek Cross pattern, a motif which is repeated in the glazing around the inset entry door. Originally, there were similar windows in the side elevations, but these have been replaced and, in some cases, extended downward.

Non-original alterations and additions to the building are not significant.

How is it significant?
The former 'D' Ascot Vale Sub-station is of local historical and architectural significance to the City of Moonee Valley.

Why is it significant?
It is historically significant for its associations with the establishment and development of the SECV network in the 1920s. It was one of the first suburban sub-stations built by the SECV and enabled the Commission to take over supply of electricity from the municipal and private companies that had supplied Melbourne's electricity until then. (Criterion A)

It is of architectural significance as a representative example of one of the first metropolitan substations constructed by the SECV that are distinguished by the use of the Greek Revival style in their form and detailing as demonstrated by the strong massing and a simplified use of Greek classical elements, such as the raking pediment (derived from the Greek temple), and the Greek Cross motif in windows. While additions have been made to the building, the original form and detailing of the sub-station is still readily apparent. (Criterion D)