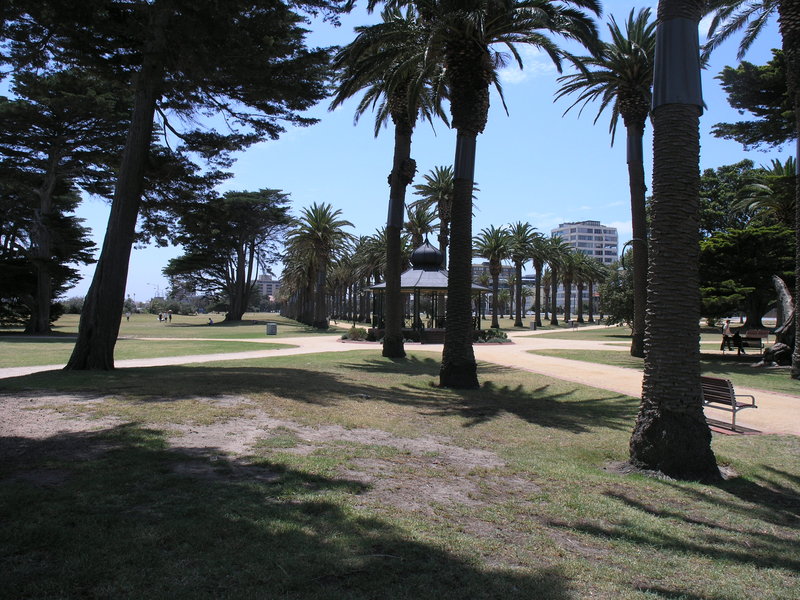 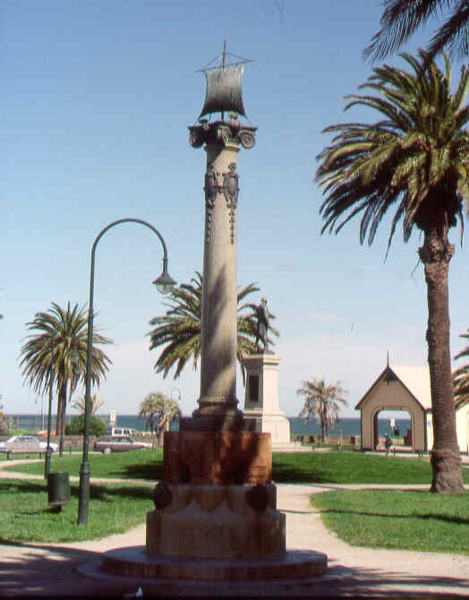 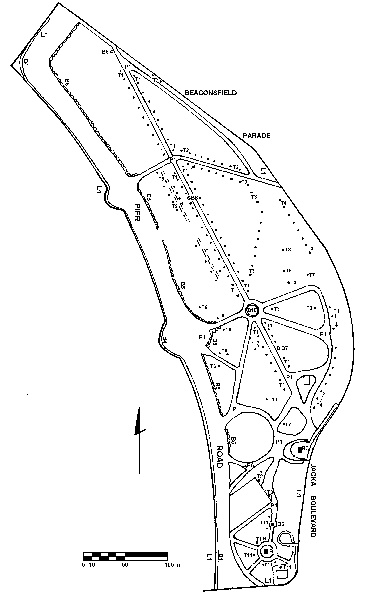 What is significant?
Catani Gardens comprise approximately 6 hectares of landscaped garden developed on foreshore reclaimed in the period from 1890 to c1916. The St Kilda Foreshore Trust Committee, set up in 1906 to reclaim and beautify the entire St Kilda foreshore, appointed Carlo Catani to design the Gardens as part of a larger foreshore plan extending to Point Ormond. The main landscaping and planting were completed by the late 1920s. The prime landscape feature of the Gardens is its extensive use of palms arranged in rows and grand avenues along principal axes of the Gardens, with secondary promenades of Monterey Cypress, and smaller pathways and specimen plantings (including the indigenous Coastal Tea Tree, Coastal Banksia, and She-Oak) adding interest and intimacy. Palms, lawns and paths dominate the Gardens, with horticultural displays apparently never an important feature. The planted lava rock retaining wall on the west side supports an embanked lawn, with bays of inbuilt bench seats facing the sea. Other early park furniture includes lava rock drinking fountains. Monuments in the Gardens include the Sali Cleve Drinking Fountain (1911), Captain Cook Monument (1914), and Cenotaph (1925).

How is it significant?
The Catani Gardens are of historical, aesthetic, architectural and scientific (horticultural) importance to the state of Victoria.

Why is it significant?
The Catani Gardens are historically important for their association with Italian born Public Works Department engineer Carlo Catani, who achieved widespread public recognition for his visionary schemes of public works including the Alexandra Gardens, Alexandra Avenue, and Lake Catani at Mount Buffalo. The Gardens also have historical significance as the major work in a foreshore development scheme which cast St Kilda as a fashionable seaside resort in the Continental manner. The European resort character of Catani’s original design concept sets the Gardens apart from other foreshore schemes. The layout, planting and monuments evoke St Kilda's heyday as a resort for promenading, reflecting both Edwardian formality and the festivity of a seaside resort. The Gardens also have significance for pioneering a multi-government Trust purely for the purposes of foreshore beautification and leisure, paving the way for similar schemes, notably at Geelong’s Eastern Beach Reserve.

Catani Gardens are of aesthetic significance for their seaside location, both reflected and enhanced through the extensive use of palms. Catani’s palm landscape has since been extended, and palms have become a major theme throughout St Kilda. The combination of open lawns, pathways, vistas, specimen planting, walls, monuments and garden furniture all contribute to the aesthetic significance.

The monuments have historical and aesthetic significance. The Cenotaph, designed by GH Alsop and JC Aisbett with models by Paul Montford, memorialises those locals who served and died in World War I and expresses the trauma of those events. It is a notable example of the distinctive war memorial design deriving from British architect Sir Edwin Lutyens and distinguished by high quality craftsmanship, subtle design and setting. The Sali Cleve Drinking Fountain has aesthetic significance as a delightful folly and rare example of the Beaux-Arts style. It is the only known public piece in bronze by noted architectural designer and artist CA Irwin. The Captain Cook statue, a replica of the Sir John Tweed statue in Cook’s birthplace Whitby, has historical significance as the major Victorian monument to Cook at that time.
Show more
Show less
All information on this page is maintained by Heritage Victoria. Click below for their website and contact details.