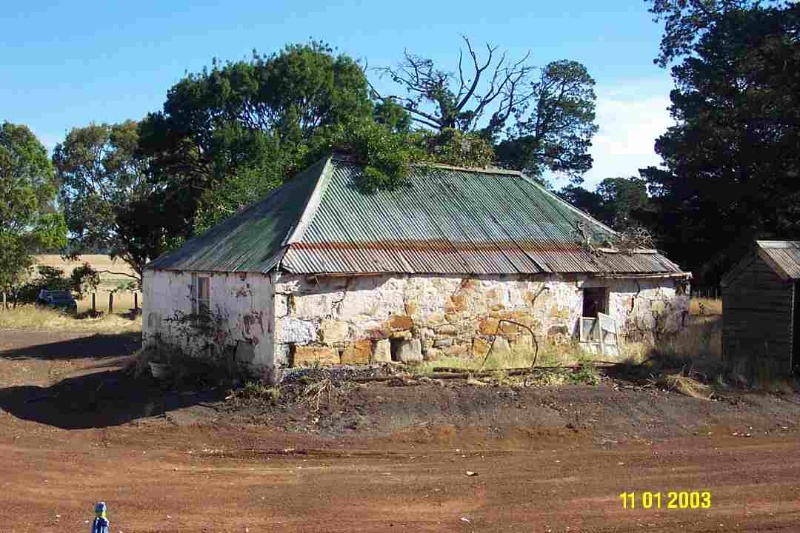 What is significant?
The Kanawalla squatting run, located on the Wannon River about 12 kms north of Hamilton, was taken up by George Duncan Lockhart in 1843 and was one of the largest in the Hamilton area. He formed a partnership with Major William Drummond Mercer and, in 1851, they subdivided it into the three great runs: Kanawalla, Mooralla and Plains (later known as Skene). The original stone hut which survives, appears to pre-date the subdivision. Mercer, an Overstraiter, kept the Kanawalla homestead section but sold immediately to William Skene, the first of a series of major pastoralists to own the property. In turn, he sold to Thomas McKellar who appears to have built the bluestone woolshed. It is large, T-shaped in plan and typical of the post-Selection period. Then Kanawalla was taken up by Austins connected with Thomas Austin of Barwon Park. The property was leased to the Crossley family for ten years until 1883. William Cockburn Messer (later Mercer), one of the largest landholders in the district, was the next owner. Messer lived at nearby Springwood, a more substantial house than at Kanawalla. At first managed for him by an employee, "Mr. Barber of Golf Hill", it seems that his son Alexander Mercer later lived at and managed Kanawalla. Early in the twentieth century, portable timber railway huts were relocated to Kanawalla to be used as men's quarters and a cookhouse. These were supplemented by new facilities after the Second World War. The homestead was demolished in 2001 but the original stone hut remains intact and in poor condition. It is a rare pre-1851 survivor and can be compared with the stone hut at Mount Napier homestead, the timber slab cottage at Kongbool homestead and the pise section of Spring Vale homestead. The woolshed retains a good degree of integrity and is in excellent condition. The timber huts are substantially intact, with their adaptive alterations, and are in fair condition. No substantial plantings or gardens survive.

How is it significant?
Kanawalla Homestead Complex is of historical and architectural significance to the Southern Grampians Shire.

Why is it significant?
Kanawalla Homestead Complex is of historical significance for its very early date, its associations with several important pastoral families and especially for its association with William Cockburn Messer and his family. It is representative of pastoral properties managed for absentee landowners. It is of architectural significance for the surviving stone hut, a rare pre-1851 homestead building, its woolshed which is typical of the 1860s, and for the two types of men's quarters both representing expediency at times of pastoral prosperity.