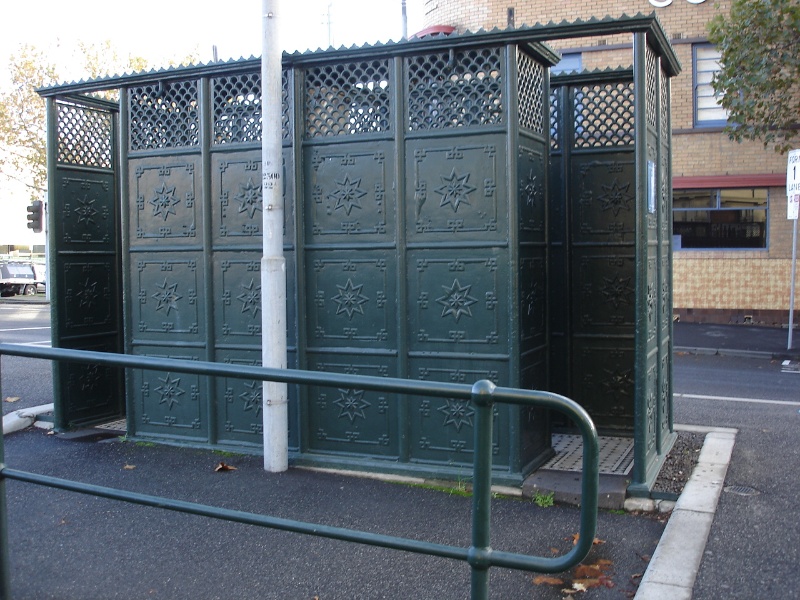 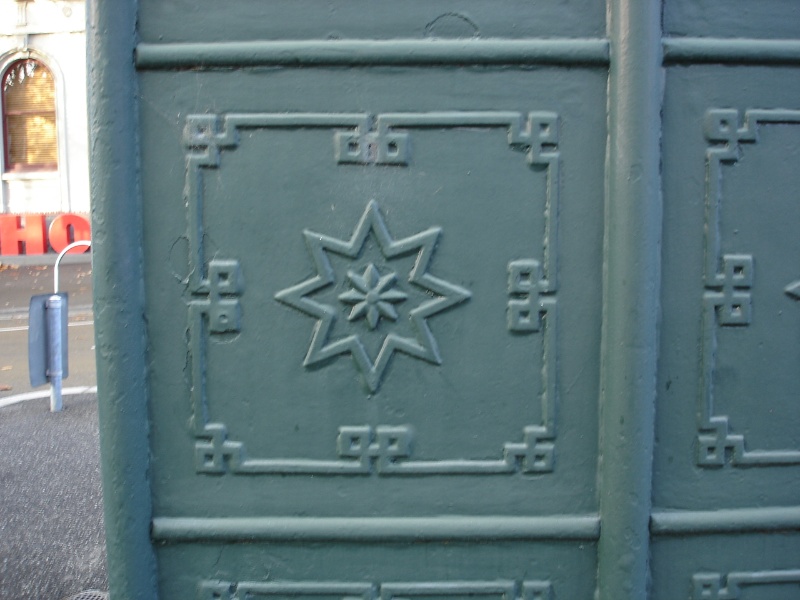 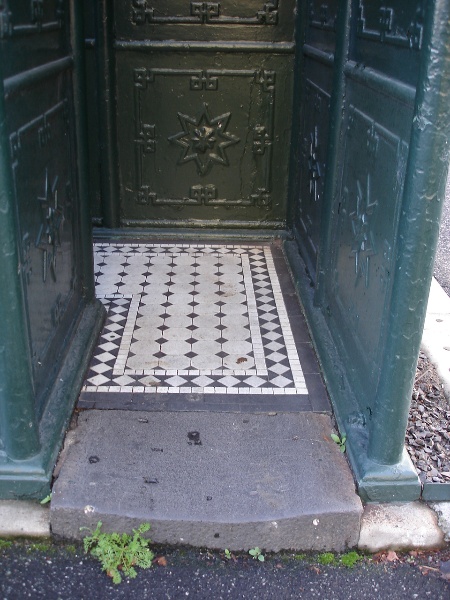 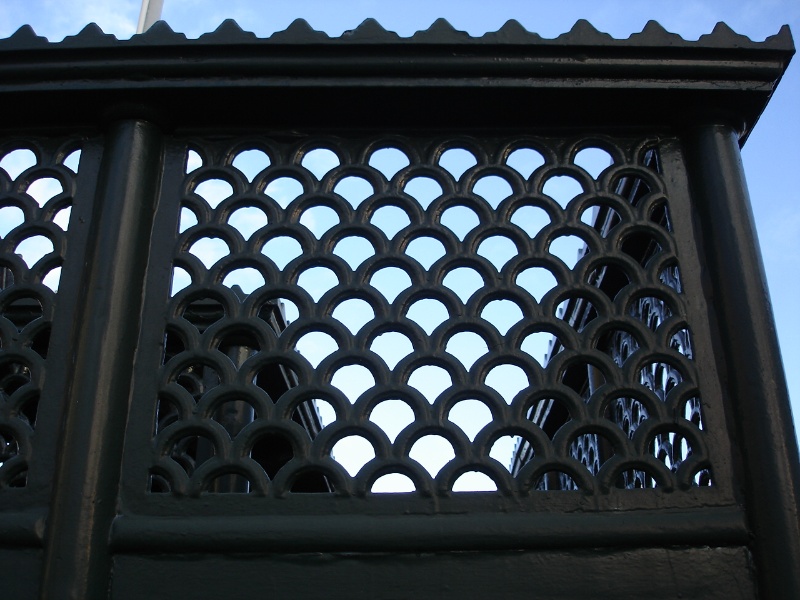 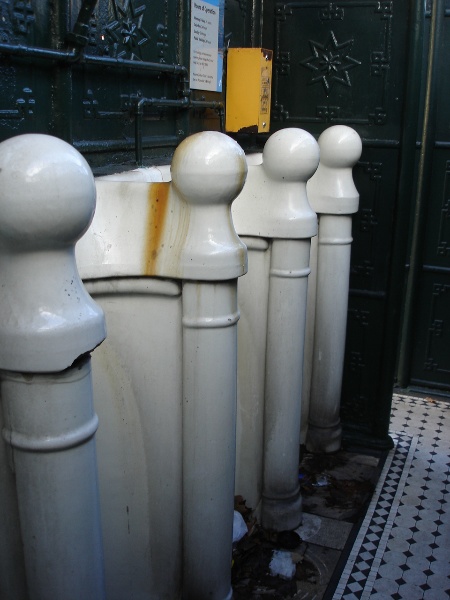 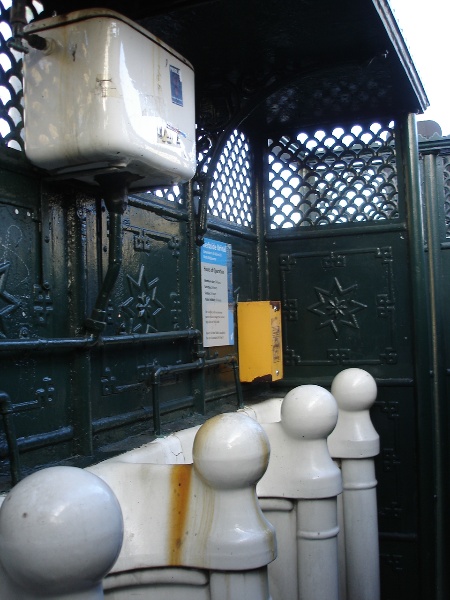 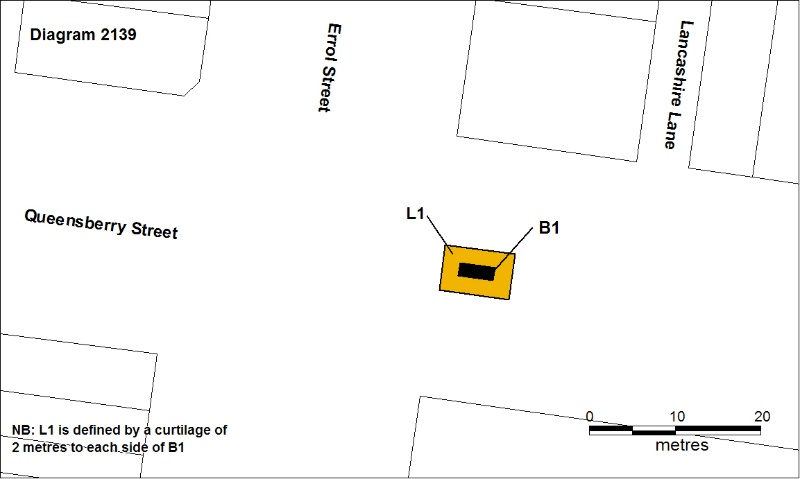 The cast iron urinal in Queensberry Street, North Melbourne, is thought to have been placed there in 1909. It was originally in Elizabeth Street, where it was replaced by an underground toilet. It is one of more than forty, most with two stalls, erected by the Melbourne City Council between 1903 and 1918. Eight of these remain, all still being used for their original purpose. The structures employed a prefabricated system which enabled the urinals to be assembled on site or dismantled and relocated if required. This occurred often, as their prominent locations in the streets sometimes offended contemporary standards of public decency. The urinals were cast by C Monteith & Sons, ironfounders, of South Melbourne, whose name plate is attached. Together with the new underground public toilets, built from 1902, they were connected to the new underground sewerage system constructed by the Melbourne Metropolitan Board of Works from the 1890s and connected in the central city area in 1898.

The urinal in Queensberry Street, North Melbourne, is a four stall urinal, the only one surviving in Melbourne. The eight surviving cast iron urinals were made using a prefabricated system of interlocking cast iron panels and posts. The 600 mm square cast iron panels slotted between 70 mm diameter cast iron columns, fixed at the base to bluestone footings and at the top to a cast iron channel which also serves as a gutter. At the centre of each cast iron panel is an eight-point star enclosing a smaller star, the whole bordered by a key pattern. The ventilation grille at the top of each panel has a delicate fish scale design. The gutter sits behind a crested iron top plate. The North Melbourne urinal has four stalls of white porcelain, curved in plan and divided by columns topped with porcelain balls. The floor is laid with black and white tiles, which are probably not original. The structure, prominently located between the Town Hall and the Court House Hotel, makes an important contribution to the North Melbourne streetscape.

The public cast urinal in Queensberry Street, North Melbourne is of historical and architectural significance to the State of Victoria.

The cast iron urinal in Queensberry Street, North Melbourne, is historically significant as one of a number of such structures erected by the City of Melbourne between 1903 and 1918, which were among the first public toilets in the City connected to the new underground sewerage system. They are a reminder of Melbourne's transition from a smelly disease ridden city to a healthier, cleaner and more modern metropolis in the first two decades of the twentieth century. The provision of a much greater number of public facilities for men compared to those for women in the city is a reflection of the continuing gender inequalities in Victorian society at the time.

The cast iron urinal in Queensberry Street, North Melbourne, is of architectural significance as a rare example of an unusual building type and of early twentieth century civic design, demonstrating the elegant street furniture developed in Victoria at the time. Although serving a basic function, the urinals were still designed to be an attractive addition to the city streetscapes. The North Melbourne urinal is the only surviving one with four stalls, all of the others having only two.