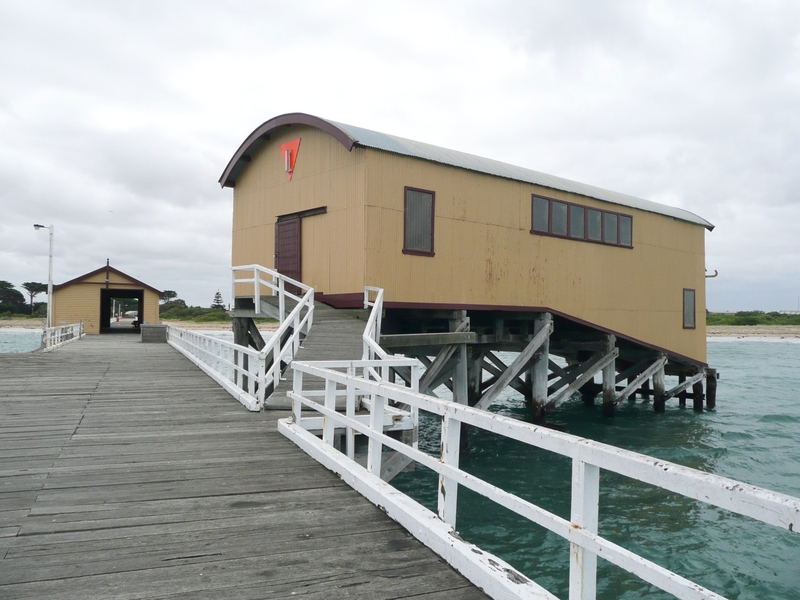 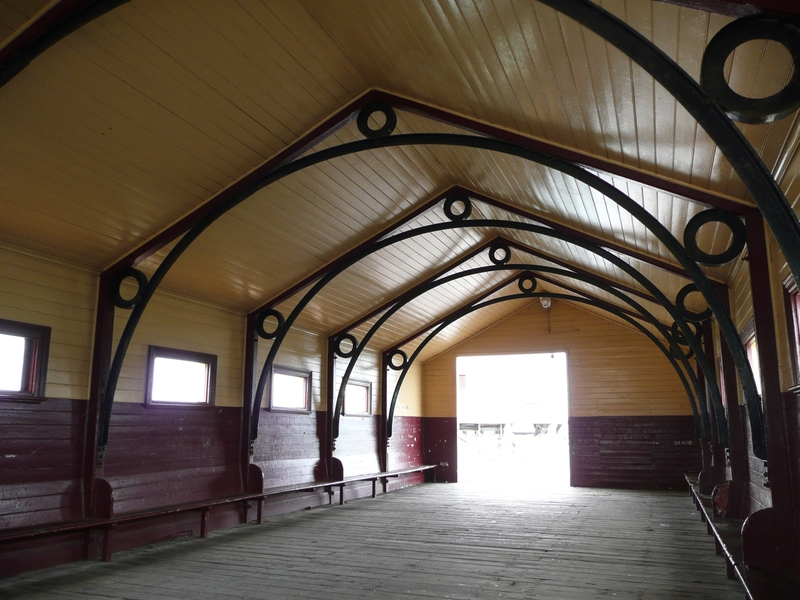 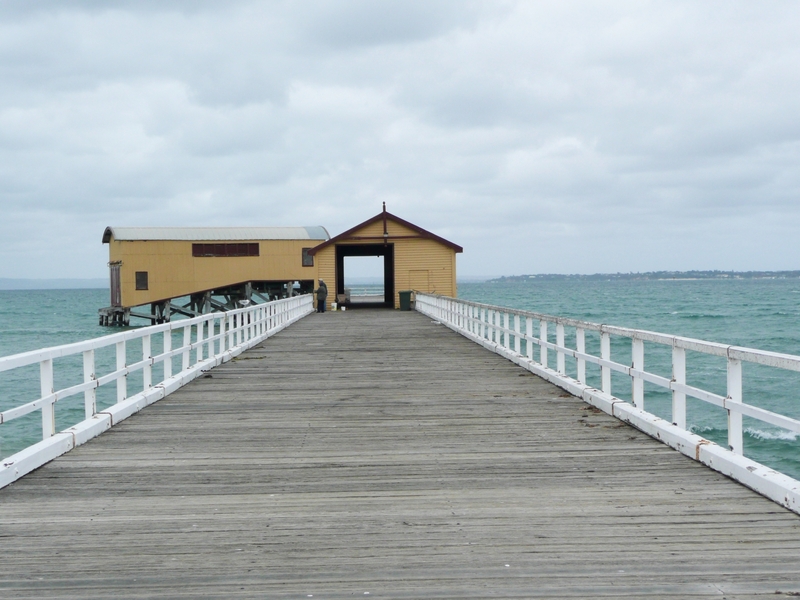 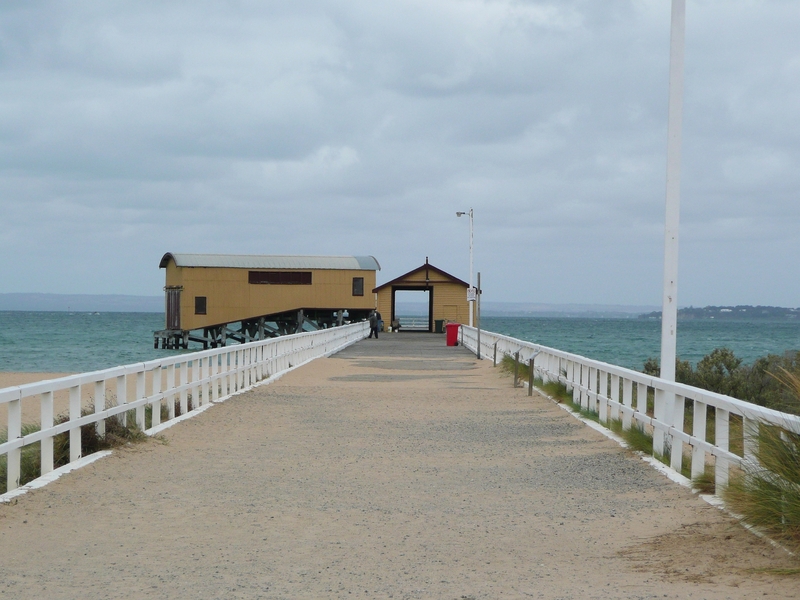 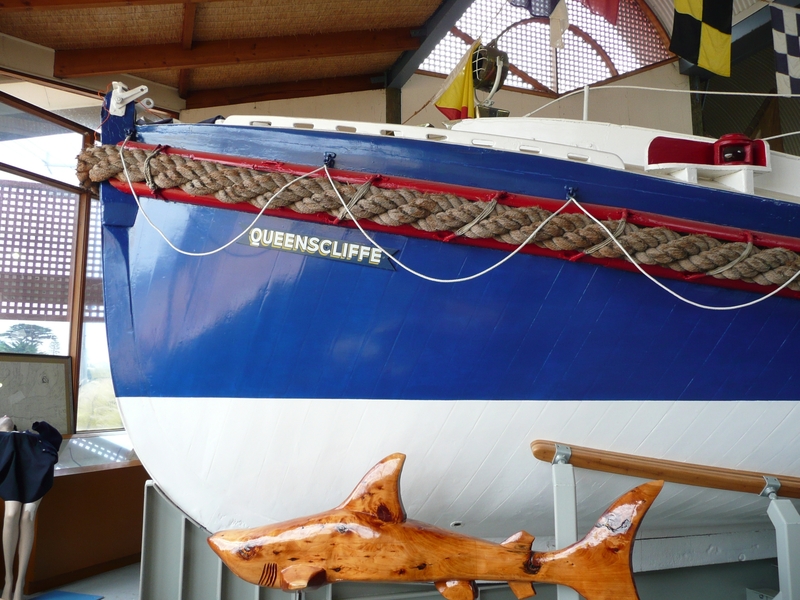 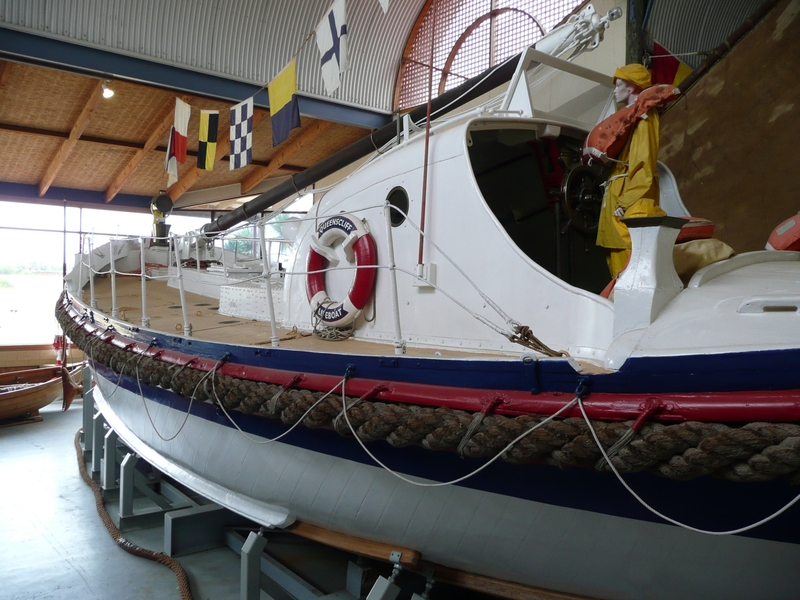 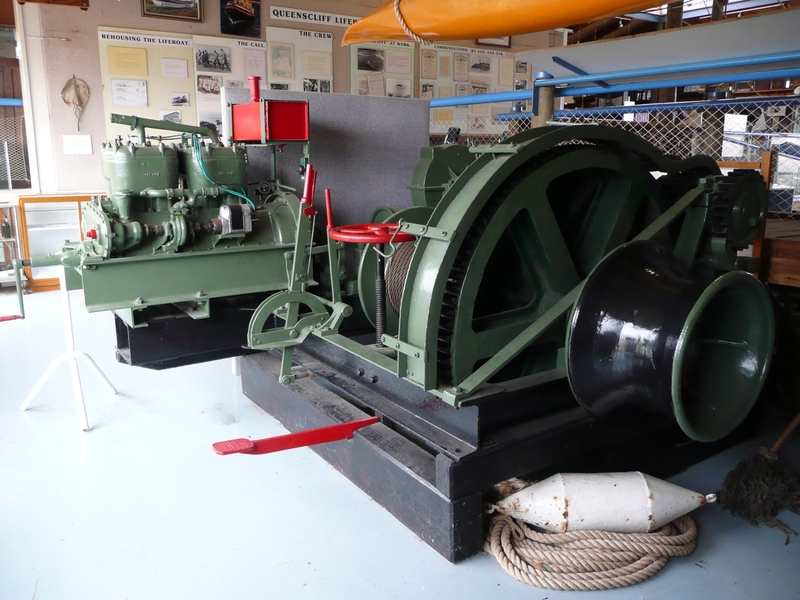 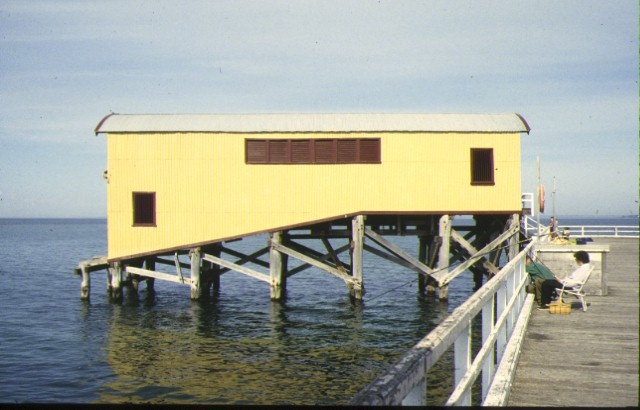 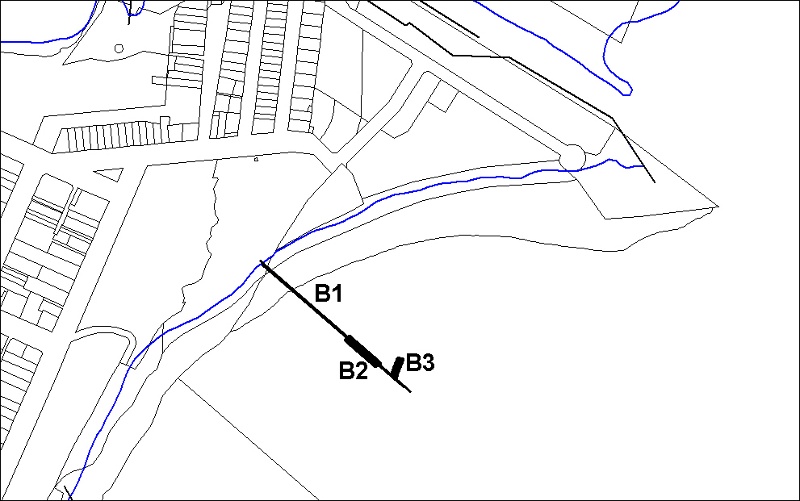 Queenscliff Pier was built between 1884 and 1889, a shelter shed in 1886-87and a new lifeboat shed between 1926 and 1929 to house the newly-arrived lifeboat Queenscliffe. The first jetty at Queenscliff was constructed in about 1856 and was located at the end of Wharf Street. A lifeboat was added soon afterwards and a lifeboat shed in 1860. This pier became known as the Fisherman's Pier. As the town prospered, the increasing use of steamers for pleasure and for carriage of goods created a need for a new pier extending to deeper water. A new pier known as the Steamer Pier was constructed in 1884 to the south of the first pier. John Knox of South Melbourne was the contractor for this pier. This is the pier that remains today. A series of extensions to both piers over the next few years culminated in the early twentieth century with the formation of a completely enclosed boat harbour. The Steamer Pier was extended a year after it was constructed, and again during 1886-7. On the 1886-7 extension to the Steamer Pier, Campbell and Grey constructed a shelter shed, which is the one in existence today. Following an extension to Fishermen's Pier, a new lifeboat shed was built between 1926 and 1929 by D O'Dorward to house the newly-arrived lifeboat Queenscliffe. The lifeboat shed included a slipway with roller, channel, keelway and cradle supplied by Herbert Brookes' Austral Otis Engineering Co., the firm, Ellinston and O'Neill added a petrol engine for the slipway. The lifeboat shed was relocated in 1946 to its current site on Queenscliff Pier (formerly Steamer Pier) and Fisherman's Pier was later demolished. The surviving lifeboat, which is now housed at the Queenscliff Maritime Museum, was the fourth lifeboat to be used at Queenscliff. It is a Watson Class boat built by A. McFarlane and Sons at Port Adelaide and was commissioned into service on 6 March 1926, and officially launched at Queenscliff on 9 April 1926.

The Queenscliff Pier and Lifeboat Complex is of historical, architectural, aesthetic and technological significance to the State of Victoria.

The Queenscliff Pier and Lifeboat Complex is of historical significance for its associations with the lifeboat service, the sea pilot service, the famous bay ferries and paddle steamers. Queenscliff Pier, built between 1884 and 1889 is of historical significance as a symbol of the early bay steamers and the numerous distinguished patrons brought by them from Melbourne to Queenscliff and Point Lonsdale. The pier perpetuates the memory of the Bay Steamer trade and the now demolished Fishermen's Pier. It contains the last lifeboat shed to be constructed over the water in Queenscliff.

The Queenscliff Pier and Lifeboat complex is of architectural significance as a collection of rare surviving intact timber pier structures. The lifeboat shed is of architectural significance as a rare intact example of a jetty mounted lifeboat shed. Few if any of these sheds remain in Victoria. Similarly the barrel shape of the shed roof is an uncommon aspect generally seen only in nineteenth century railway goods sheds. The shelter shed too, with its arched wrought iron truss work and panelled timber interior is a more sophisticated and direct reminder of the bay steamer days. The pier and its buildings are of aesthetic significance as a prominent landmark on the bay representing a bygone era in Queenscliff's history.

The lifeboat is of technological significance as it is the only example of its type known to exist in Australia. It demonstrates boat building and rescue technologies at the time of its construction in 1926.