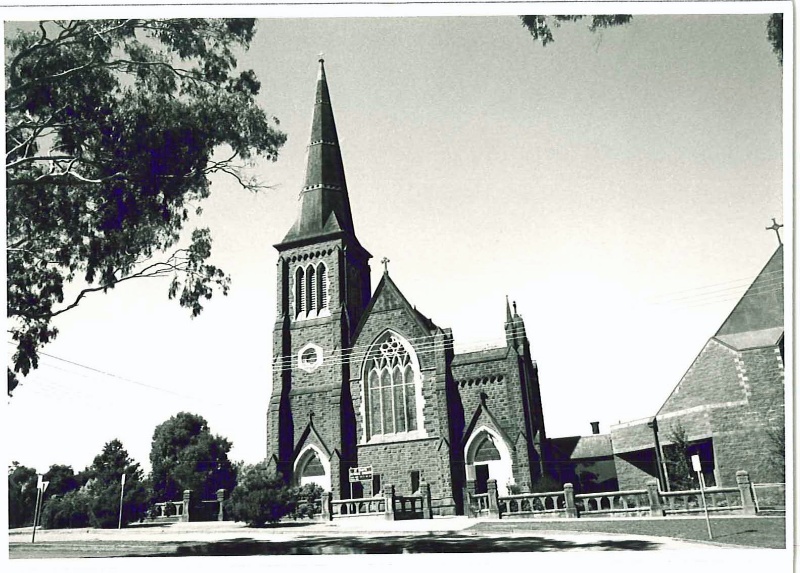 SIGNIFICANCE: »focus for the Catholics of Hamilton, as a design by Wardell with J H Fox and for its later extensions. With the twin spires of Church Hill this is a landmark building for Hamilton.

This building has regional significance for its architectural interest as a notable Western District church, the first section of which was designed in 1865 by the distinguished architect, William Wilkinson Wardell, who was responsible for the design of St Patrick's Cathedral in Melbourne as well as many other important ecclesiastical buildings throughout Victoria. ([i]) The architect James Henry Fox, who designed sections of the Hamilton Hospital in the 1860s, most probably supervised early work at St Mary's, which opened in August 1866. ([ii])

St Mary's, a bluestone church with Mt Sturgeon sandstone dressings, is of interest for its dramatically steep apse with etiolated windows and the typically Wardellian sexfoil windows of the clerestory. The building also has associations with the local architect, Frank Hammond, Town Clerk and Engineer, who designed a number of important Hamilton buildings. The west end of St Mary's was completed from Hammond's designs in 1902 and he was responsible also, for the completion of the spire in 1916. ([iii]) Another local architect, Francis Punch, was responsible for extensions and renovations in 1987. ([iv]) St Mary's has historical significance for its associations with Catholic congregations in the Hamilton district and beyond over a period of more than 120 years.

The church is significantly intact and in excellent condition. It is a critical part of the streetscape and its spire, as with those on Church Hill, forms a landmark for Hamilton.