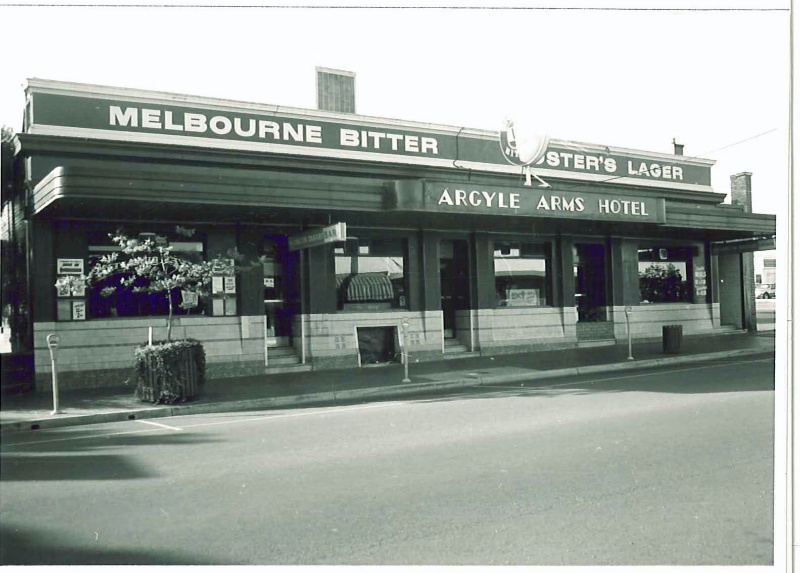 SIGNIFICANCE: »One of the oldest hotels in Hamilton and with a stylish new facade from the 1930s, reworked by the important Melbourne architects, Seabrook & Fildes. Key position at entrance to Gray Street commercial area.
STATEMENT OF SIGNIFICANCE

This building has local historic and architectural significance as a rare surviving 1860s hotel, inns being amongst the earliest structures erected in the Grange township which predated the founding of the Hamilton municipality. The Argyle Arms Hotel, which dates from 1864, ([i]) was one of a number of new hotels opened in Gray Street, the commercial and service centre, in that decade. During the 1860s both churches and hotels multiplied rapidly in this period of consolidation and growth. ([ii]) During the shearers' strikes of the late 1880s, there was a camp of union men opposite the Argyle Arms Hotel, who gave the `scabs' who came into Hamilton a hard time. ([iii])

In the early twentieth century this hotel was completely modernised with a new facade designed by the leading Melbourne architects, Seabrook and Fildes. The builder for the renovation was Reg Williams. ([iv]) The firm renovated the George and Grand Central Hotels as well but the Argyle Arms was the most stylish and is the best preserved. The firm designed and remodelled many other significant buildings in Gray Street. The Argyle Arms survives significantly intact and in excellent condition. It is a key element in the streetscape being at the entrance to the Gray Street commercial area.

[iv] The precise date in the 1930s is not known. The attribution to Seabrook and Fildes is by Mrs Peg Christie, daughter of Reg Williams.