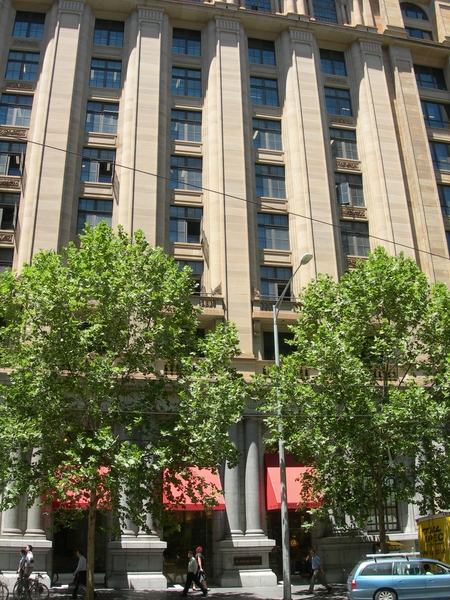 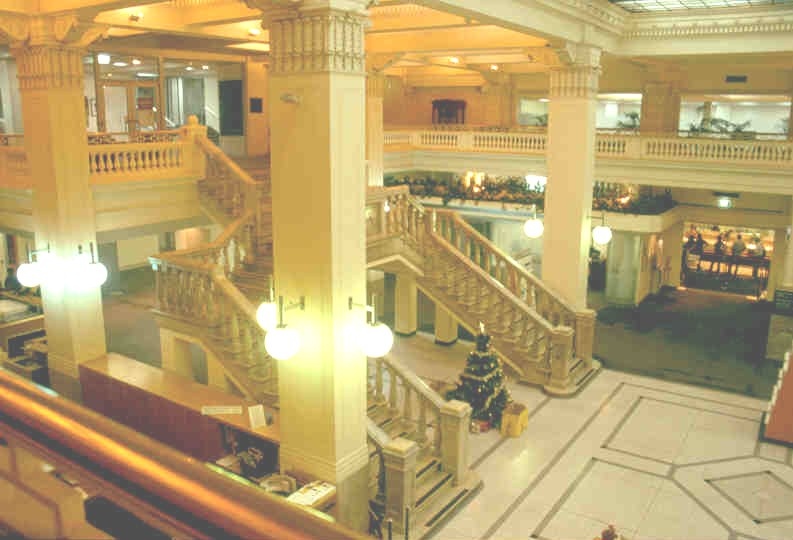 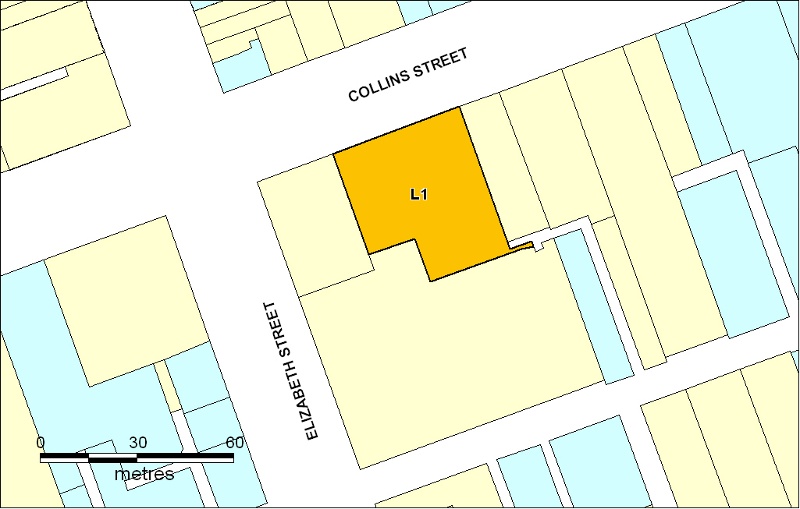 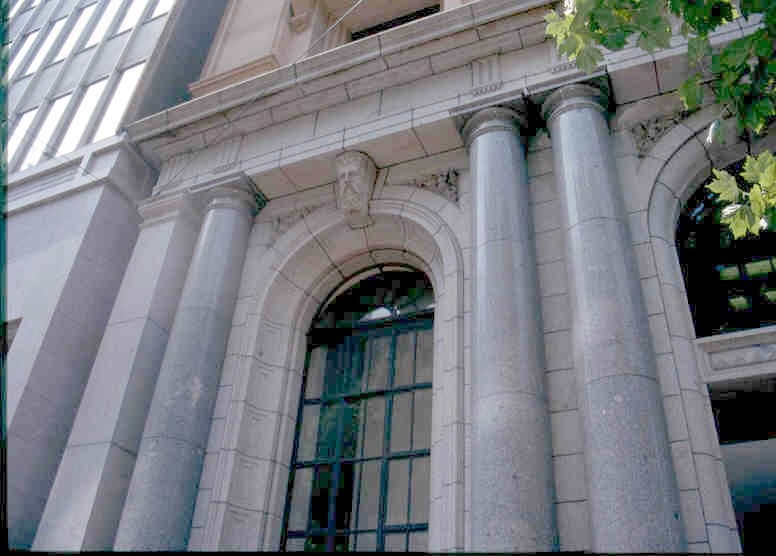 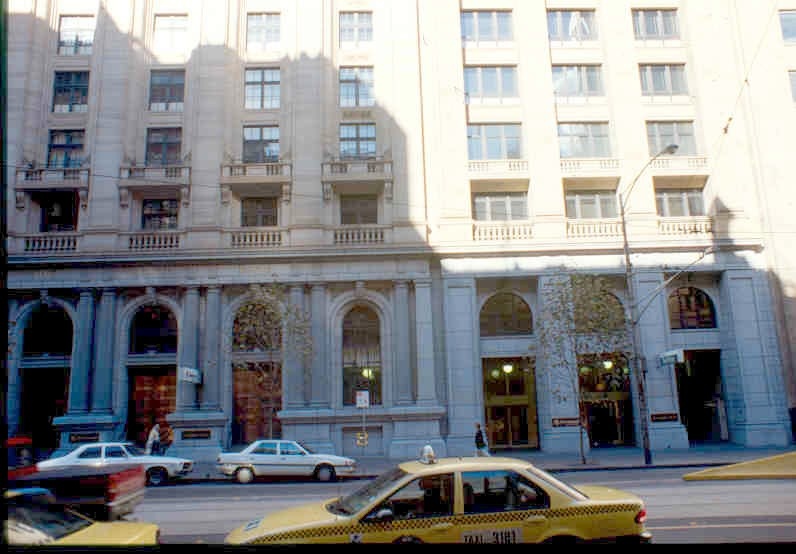 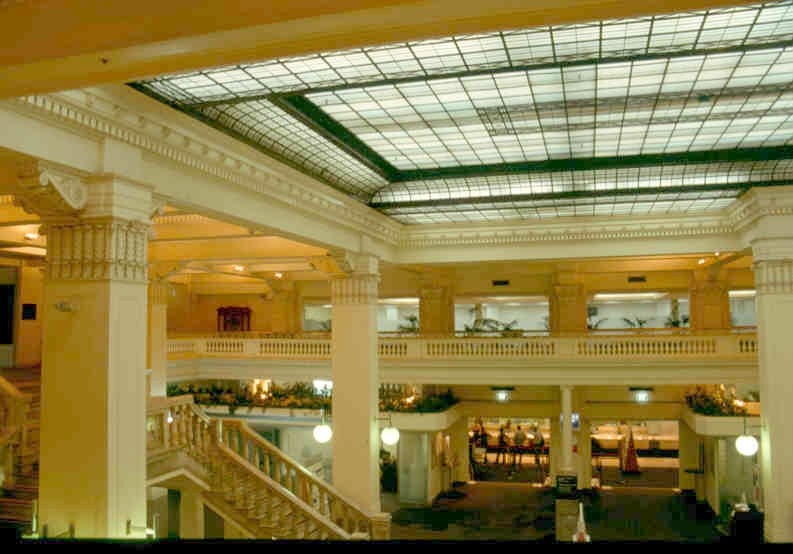 What is significant?
The former Head Office of the National Bank of Australasia at 271-285 Collins Street was the second head office building erected on this site by the bank. The first, designed by architect Lloyd Tayler, opened in 1870. In 1924-5 the architects A & K Henderson won the competition for the design of a new building, designing a 5 bay, 10 storey steel framed structure with reinforced concrete floors. The building rose to the maximum permitted height limit, 132ft (40.2m). The design is that of a stretched commercial palazzo, with a strongly emphasised base and top storey linked by relatively neutral successive floors, but in this instance deliberately echoing the design of the earlier two storey building. The ground floor of the original building was repeated in the new ground floor, comprising pairs of polished Harcourt granite Tuscan/Doric columns, and carved masks over the arched openings. The Palladian windows of the first floor were reproduced on the new top floor, separated by seven storeys of multi-paned steel framed windows flanked by giant order pilasters faced with Hawkesbury sandstone. The new building was officially opened in October 1927. In 1930 the building was voted by readers of the Herald newspaper as one of the two most handsome buildings in the city.

The entrance is via steps leading up from Collins Street to the three central arched openings and three massive sliding bronze doors. The banking chamber is a voluminous space, approximately 43m deep, 26m wide and more than 8m high. It is artificially lit by a large T-shaped lead skylight below the central light court. The elaborate coffered plaster ceiling is supported by clustered giant order pillars with Corinthian inspired capitals. Ionic columns support the encircling balustraded mezzanine gallery, which is accessed by a grand divided marble staircase at the south end of the chamber which was added in the 1930s and is located on axis with the entrance. In the chamber there was a Women's Bank, an innovation at the time. The banking chamber has been altered a number of times, most notably in the 1930s to include the staircase and during the 1980s renovations. The second floor contains the boardroom and board dining room, panelled in English Oak and Tasmanian Blackwood, and with elaborate coffered plaster ceilings. In the basement are the series of strongrooms, with original Chatwood Patent strongroom doors.

The building underwent major alterations in the 1980s when the bank merged with Commercial Banking Company of Sydney to create the National Australia Bank. Alterations, which included the major but sympathetic three bay addition at 285 Collins Street, left the 1920s facade intact. Fabric that has been removed around the entrance includes the original entrance hall with swing doors, observation gallery and associated stairs and lifts, some of which was probably removed when the marble staircase was added.

How is it significant?
The former Head Office of the National Bank of Australasia is of architectural and historical significance to the State of Victoria.

Why is it significant?
The former Head Office of the National Bank of Australasia is architecturally significant as an outstanding example of the stretched commercial palazzo style. The stretched palazzo style, a common enough style in early twentieth century Melbourne buildings, is unusual in this instance for the strong Renaissance revival overlay in contrast to the more typical stripped classicism of the period. The imposing, classically styled entrance underlines the institutional nature of the bank, whilst the composition as a whole makes an elegant contribution to Collins Street at a time when architects and critics were increasingly concerned about the contribution new buildings made to the existing streetscape. It received popular acclaim in 1930 from the readers of the Herald newspaper. Internally the banking chamber has been altered, but remains an impressive and elaborate twentieth century space. The board room and dining room (together with the associated furnishings) are interesting surviving examples . The building is also significant for its associations with the architectural firm of A & K Henderson. Under the direction of Kingsley Henderson the firm specialised in commercial and banking structures and achieved great acclaim for their designs, particularly along Collins Street.

The former Head Office of the National Bank of Australasia is historically significant as the former headquarters of one of Australia's major banks. It was the second head office constructed on this site in Collins Street. The building was a symbol of confidence as Australia entered the Depression of the late 1920s. The building is historically significant for its associations with the Women's Bank, an innovation for women to conduct their banking in private.

In the chamber, the marble stairs have been removed, the corinthian column capitals restored, and the ground level subdivided with glass partitions to form shop areas. Glass display cases have been inserted in the facade beneath the windows of the ground level.