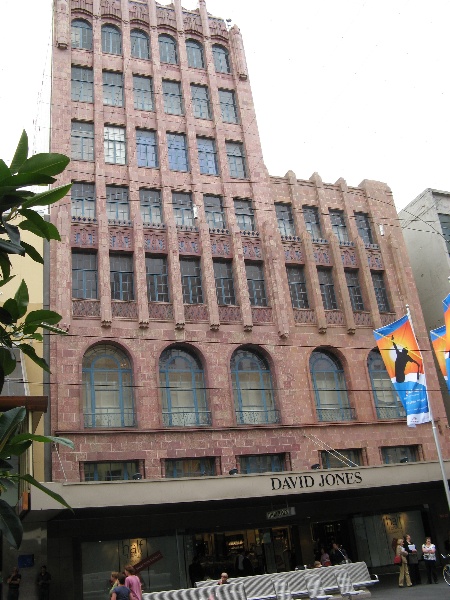 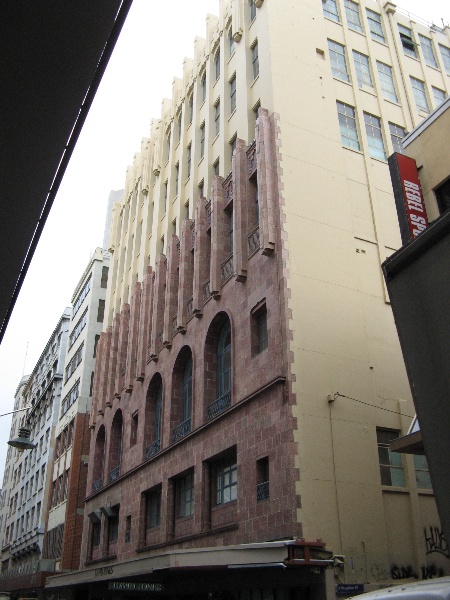 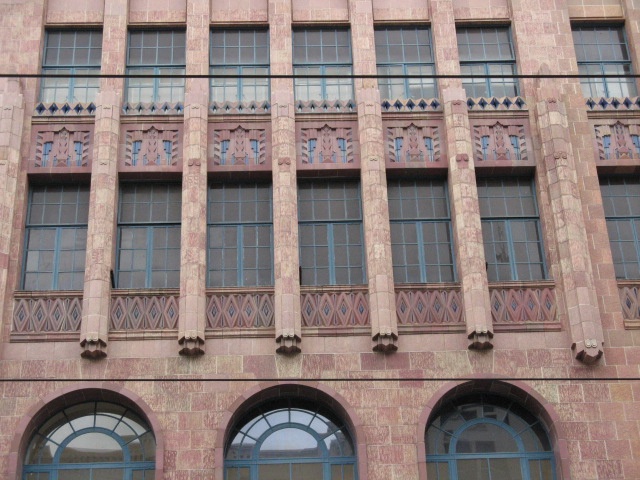 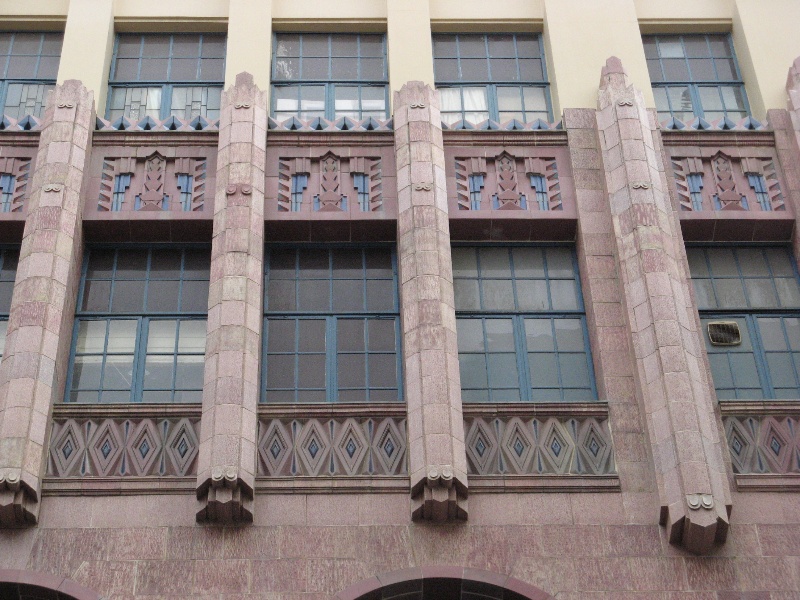 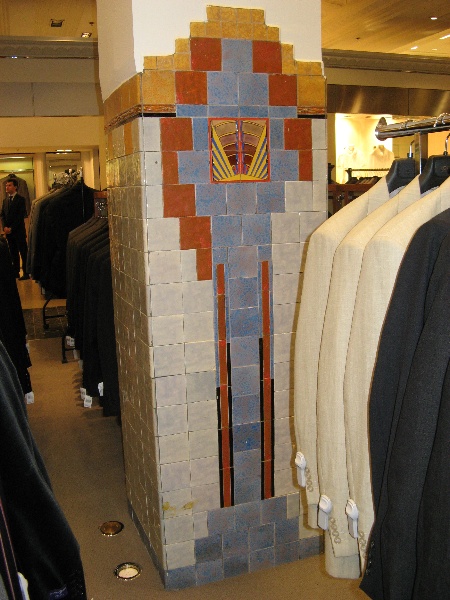 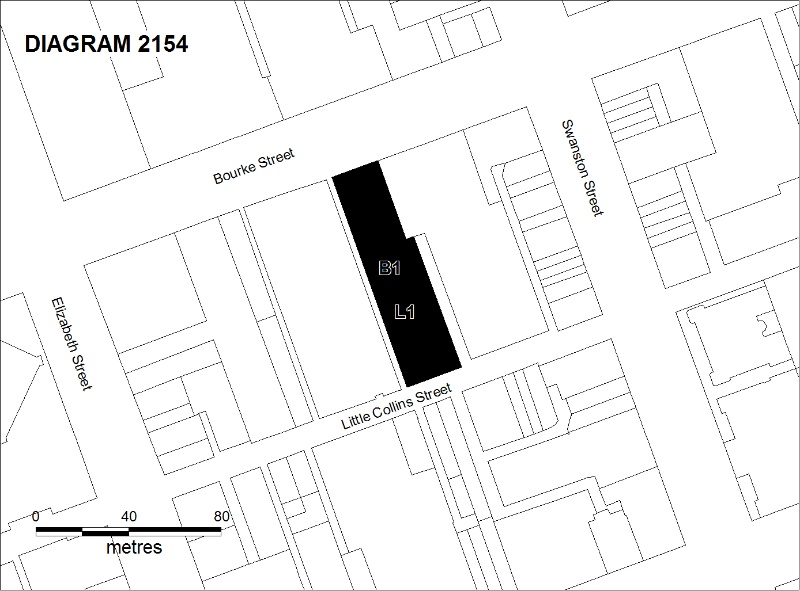 The David Jones store on the south side of Bourke Street was built in two stages in 1929-30 and 1938 as the flagship store of G J Coles Pty Ltd to a design by the prominent Melbourne architect Harry Norris. George Coles opened his first variety store in Smith Street in 1914 with the slogan 'Nothing over 2/6', opened a store in Bourke Street in 1924, and by World War II, despite the Depression, the company operated eighty-six stores throughout Australia, many of them designed by Norris. Norris was the architect for G J Coles & Co, and was a frequent visitor to the United States, where he studied the latest trends in American architecture and in retail design, and his work in Melbourne showed a strong American influence. His buildings demonstrate the move towards greater use of colour in facades in the 1920s and 1930s, especially in the use of glazed terracotta. The seven-storey eastern section of the store was built by E A Watts, costing ₤500,000 for the site, building and fitout, and opened in March 1930. The 1938 four-storey extension by Cockram & Sons matched the original in style but destroyed the symmetry of the first building. The store was famous for its first floor cafeteria, decorated in a Mexican-inspired Art Deco style, the first and largest in Australia and a highlight of shopping trips to the city for many Victorians. The store was sold to David Jones in 1986 and was altered by the architectural firm Bates Smart & McCutcheon; the exterior was left intact but the cafeteria and many of the Art Deco interior features were removed. David Jones is Australia's oldest department store company, having opened their first store in Sydney in 1838.

The David Jones store is a seven-storey reinforced concrete and steel building with a four storey extension to the west, both in a Commercial Gothic style. The facades are clad with striking pinkish-red Wunderlich terracotta faience, with decorative Hispanic/Indian/Jazz details in pink and blue. The first floor windows are arched with wrought iron railings and above these narrow terracotta clad ribs rise up between the upper windows through the decorative parapet above. The metal window frames are painted blue. The Little Collins Street facade is in a similar mode but is less ornate, and its upper levels are clad in cream rather than pink tiles. The original shopfronts have been replaced. Vestiges of the original interior decorative scheme survive in the tiling on some of the first floor columns and in some plaster ceilings on the ground floor.

The David Jones Store is of architectural, historical and social significance to the State of Victoria.

The David Jones store is architecturally significant for its distinctive and intact terracotta facade, making it one of the most exuberant and colourful interwar buildings in the city and an early and flamboyant example of the call in the 1920s for more colour in city buildings. It was the first major Chicago-inspired Commercial Gothic building in Victoria, a style that was later adopted for the Manchester Unity and Century Buildings in Swanston Street, and which exemplifies the American influence on architecture in Melbourne at the time. It is significant as a notable example of the work of the prominent Melbourne architect Harry Norris, a major architect of Moderne style buildings in Melbourne in the 1920s and 1930s.

The David Jones store is historically significant as one of the most important of the retail stores built in Melbourne in the early twentieth century. It is significant for its association with G J Coles & Co, which became a household name in retailing in Australia. The store was the flagship store of the once ubiquitous chain of Coles variety stores for over fifty years, from 1929 to 1987 and its cafeteria was a favourite meeting place for generations of Melbourne people. The site also has an association with the Coles Book Arcade, which was a Melbourne institution for the previous fifty years.

The David Jones store is socially significant as a favourite shopping destination for generations of Victorians.