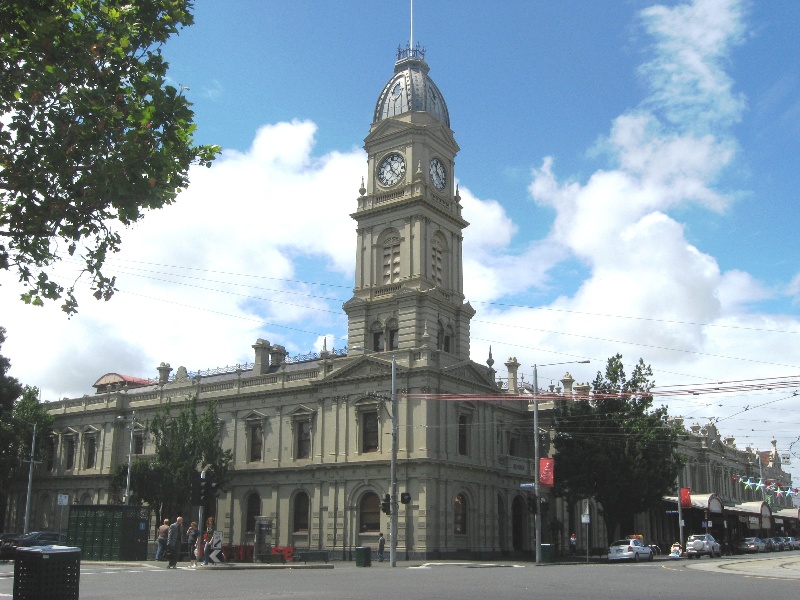 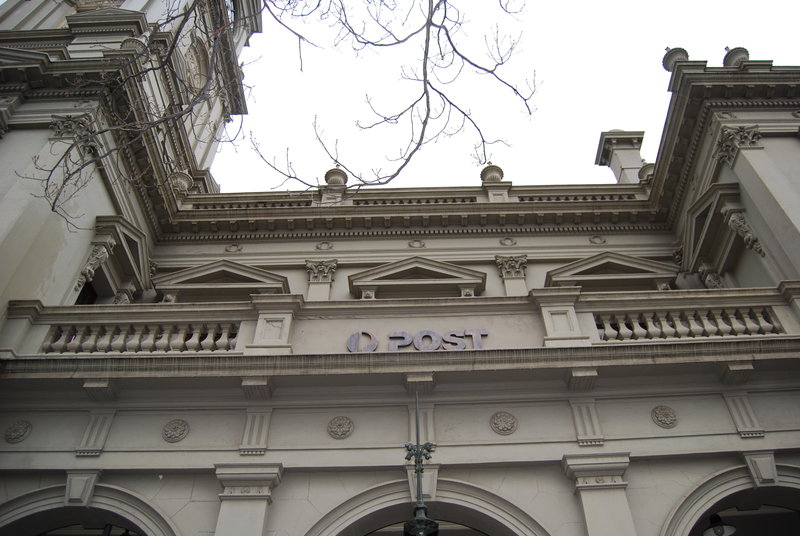 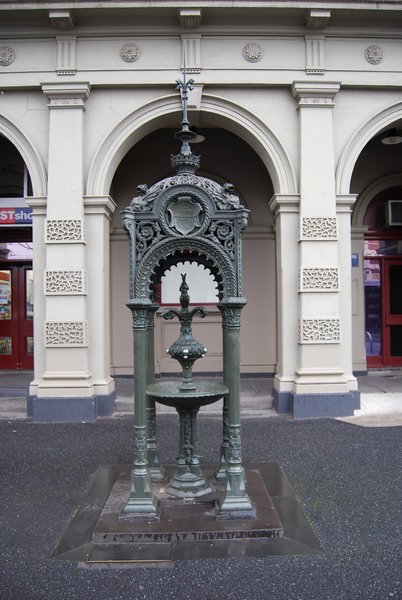 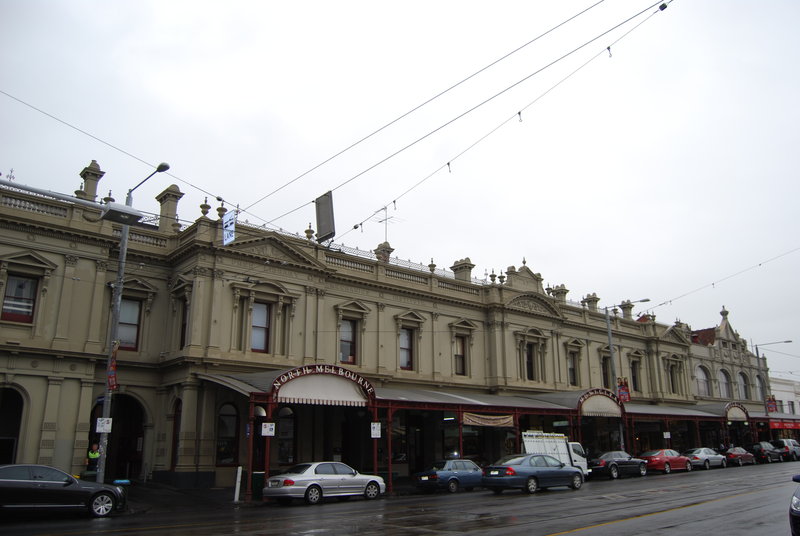 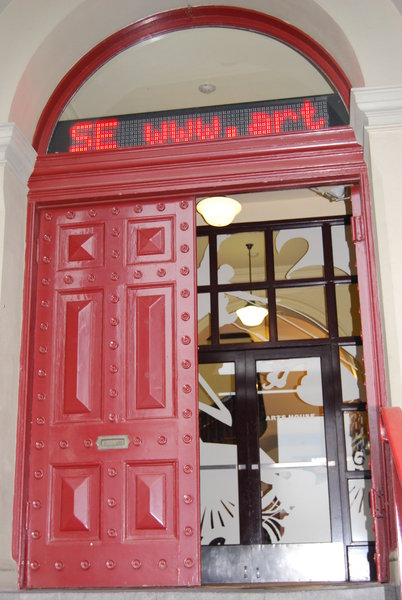 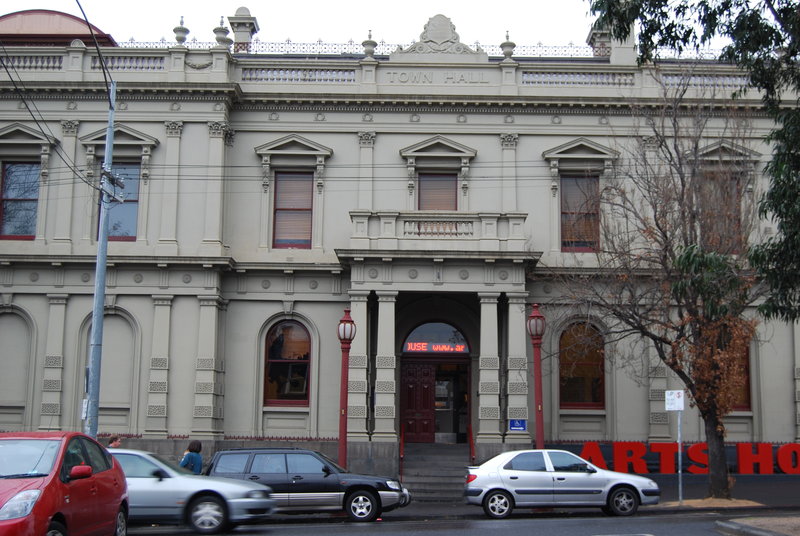 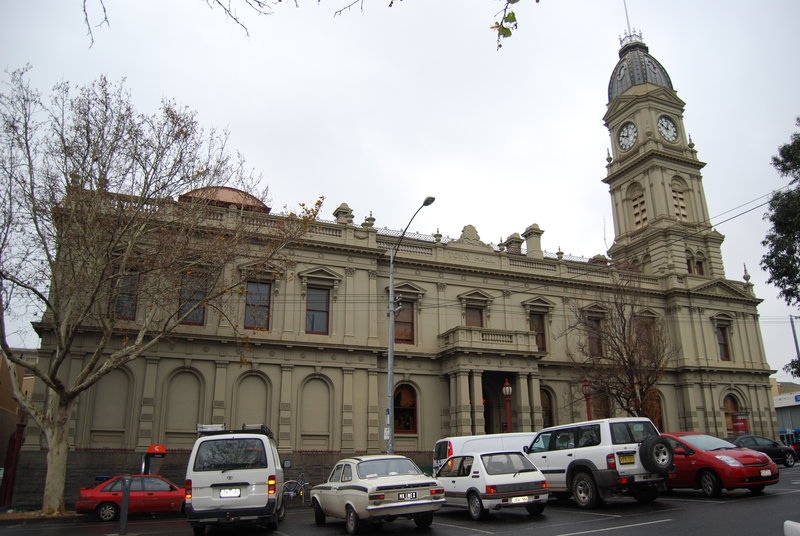 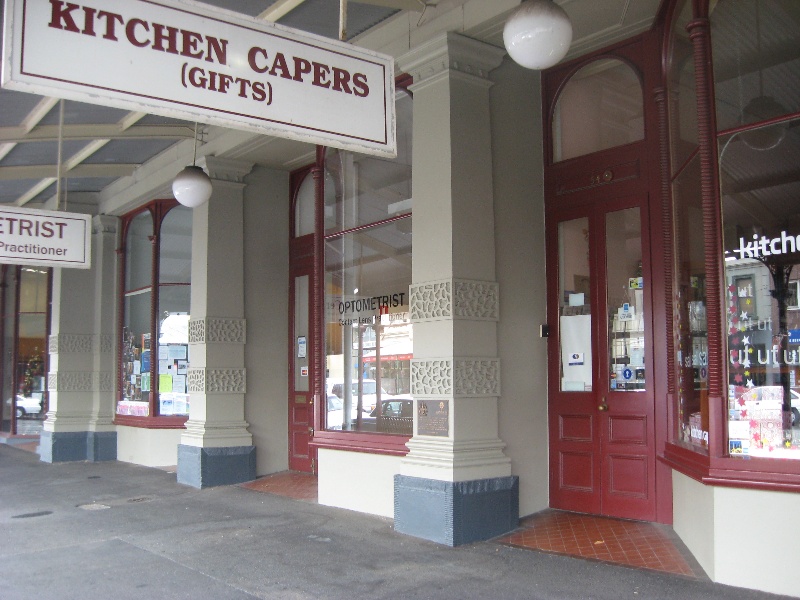 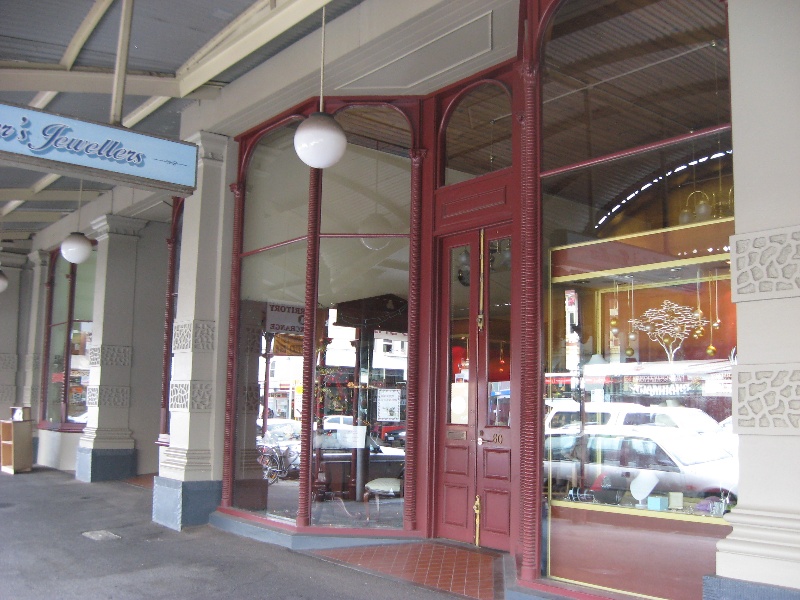 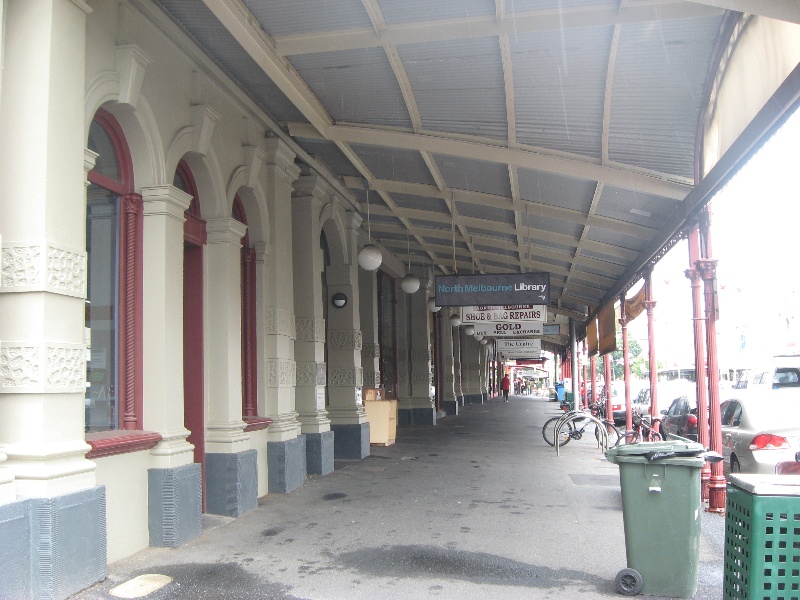 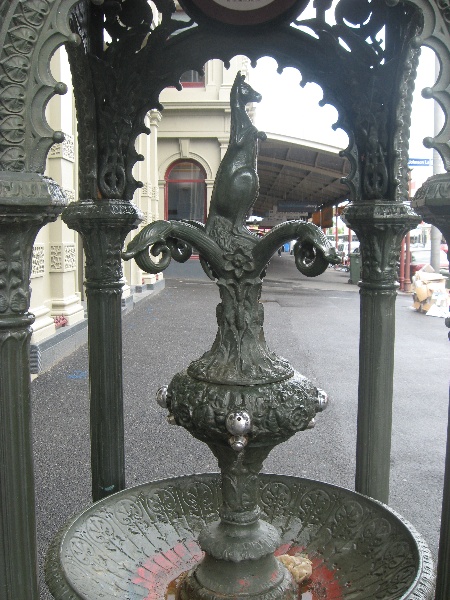 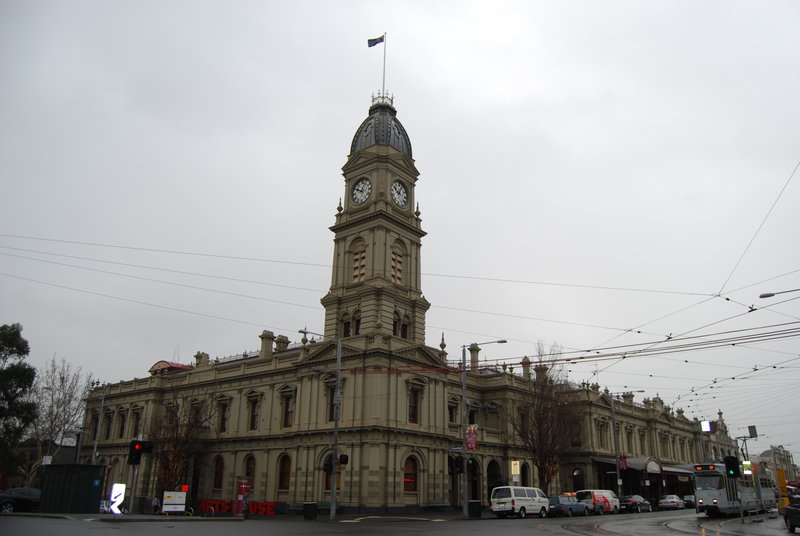 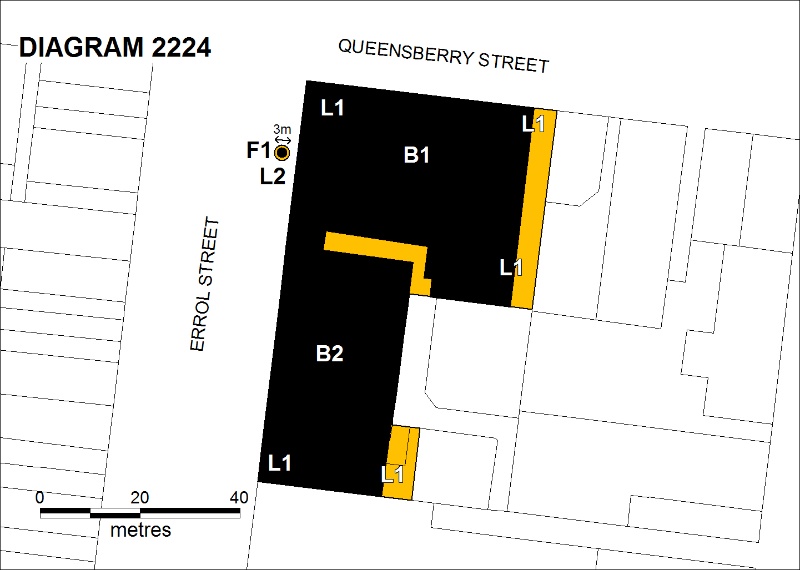 The former North Melbourne Town Hall, first known as the Hotham Town Hall, was built in 1875-6 to the competition-winning design of the architect George Johnson. It replaced the first town hall built in 1861. In 1859 Hotham was one of the first of the inner suburbs of Melbourne to become an independent municipality, the name changing to North Melbourne in 1887. The new Town Hall was built by David Parry, the contract price being £9,603.10.0, but it was eventually to cost about £20,000. It included a large hall and the municipal offices, which opened off Queensberry Street, and the Post and Telegraph Office and Courthouse opening off Errol Street. The corner tower was designed to have a clock and bells: the five bells, made in 1877 in Glasgow, were installed in 1878, and the clock, designed by the Government Astronomer Robert Ellery and made in Melbourne by Thomas Gaunt, was added in 1879. In 1881 Johnson drew up plans for a new Municipal Building, in a similar style to the Town Hall. It included a Mechanics Institute and Library, as well as eight shops to generate an income. The first stage, the north end of the present building, with two shops and a lecture hall behind on the ground floor and reading and billiards rooms on the first floor, was built by Delbridge and Thomas and was completed in 1883. Fallshaw Bros & Hodgson completed the remaining six shops in 1888. In 1886 Johnson also designed major alterations to the Town Hall: the main hall was extended by 20 ft and a stage and dressing rooms added, and a space for a supper room was created beneath the main stairs. The Henderson Fountain, cast in Glasgow in 1875 and donated by the Councillor and several times Mayor, Thomas Henderson, was placed opposite the Town Hall in the middle of Queensberry Street in 1877, and moved to its present location outside the post office in 1973. In 1905 North Melbourne was again amalgamated with the City of Melbourne, and the Town Hall was no longer the Municipal centre. However it continued to house some council services, including a child health centre, and the hall continued to be used for meetings and dances, and even briefly as a cinema. The Town Hall was converted for use as the Arts House in 1996. The north end of the Municipal Buildings is still used by the North Melbourne Library, while seven of the shops are still used for their original purpose.

The former North Melbourne Town Hall is a two-storey Free Classical style building with a clock tower. To the south, separated from the Town Hall by Johnson Lane, is the two storey North Melbourne Municipal Buildings, built to match the Town Hall, but with an impressive wide verandah. Both of the buildings are of brick on a bluestone base, and the street elevations are rendered. The entrance to the Town Hall and municipal offices is marked by a shallow portico in the centre of the Queensberry Street elevation. The main hall and offices are on the ground floor, and a grand staircase of cast iron with a timber handrail leads to the upper floor, with the Council Chamber and Meeting Room, the Mayor's Office and two former residences: one built for the Hall caretaker, the other for the Postmaster. Impressive cast iron gates close off the laneway to the east. On the Errol Street frontage of this building is a recessed arcade with the entrances to what were once the Post and Telegraph Office and the Court House, now the North Melbourne Post Office. The Library now occupies the northernmost end of the Municipal Buildings, and seven shops remain, all with their original shopfronts. The Henderson Fountain is an elaborate cast iron structure with a central basin covered by a canopy supported on four columns. The four bubblers above the central basin are surmounted by a kangaroo (restored in 2001).

The former North Melbourne Town Hall is architecturally significant as one of the earliest of the grand municipal buildings that characterised Victoria in the post-gold era. It is an outstanding and intact example of the grand town halls which were built in the inner suburbs of Melbourne in the 1870s and 1880s, and demonstrates the prosperity of these municipalities at the time. The shops in the Municipal Buildings are significant for their intact nineteenth century shopfronts, which form an exceptional group. Both buildings are architecturally significant for their association with George Johnson, one of Victoria's most important architects during this period, and the pre-eminent architect of town halls.

The former North Melbourne Town Hall and Municipal Buildings are historically significant as a demonstration of the wealth of Melbourne, and of its inner suburbs, in the period after the gold rushes. They are also significant for the residential quarters provided on the first floor of the Town Hall building for the caretaker and for the postmaster, and also above the shops in the Municipal Buildings, which demonstrate the nineteenth and early twentieth century custom of workers residing at their place of employment. The clock and bells in the Town Hall tower are a reflection of the importance of these features to the community at a time when few people owned watches and public clocks were a necessity. The Henderson Fountain is significant as a reflection of the importance of such public facilities at the time, and its kangaroo centrepiece is an interesting demonstration of increasing nationalism in the young colony.

My 2x great grandfatherr, William Paterson (1846-1924), lived in 68 Errol St from approximately 1897 to at least 1916 when he lists this address on the admission papers for his eldest daughter Ada. He died in Sydney in 1924. William was a 'bootmaker' of fine leather shoes in Sydney where he had his own business. Is it just a coincidence that 62 & 64 Errol St, North Melbourne are a wonderful looking bootmakers/repairs shop or was William responsible for setting up a bootmakers in the building?