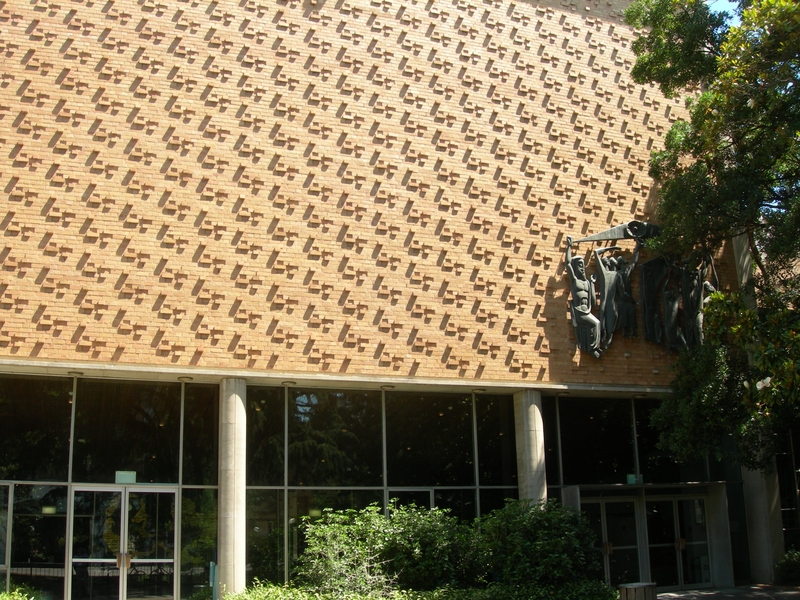 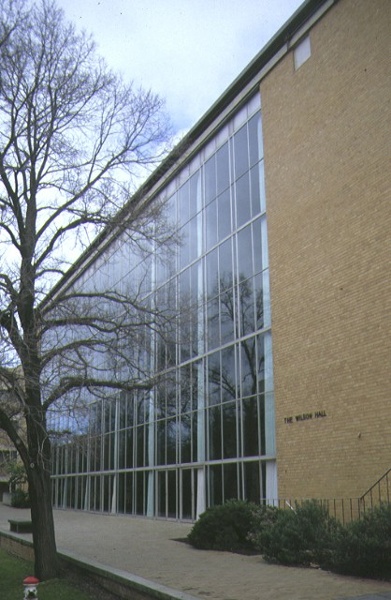 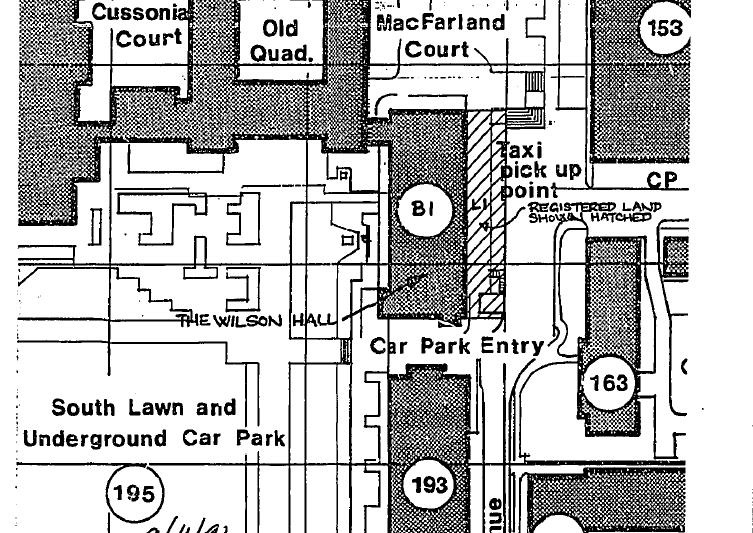 Wilson Hall is the ceremonial hall of the University of Melbourne and was designed by architects Bates, Smart and McCutcheon and officially opened on 22 March, 1956. The original Wilson Hall, designed in a Gothic Revival style by architects Reed and Barnes in 1879, was destroyed by fire in 1952. The new building, constructed on the bluestone foundation walls of the original Wilson Hall and incorporating stone rosettes from the old hall in the textured brickwork of the south wall, has a strong historical association with prominent pastoralist and politician Sir Samuel Wilson, whose gift of £30,000 in 1874 made possible the original Wilson Hall. The hall, approximately 52m long and 19m wide, functions as a venue for concerts, addresses and examinations. Wilson Hall was the first in a series of progressive architectural designs that transformed the character of the University of Melbourne campus in the 1950s. With the Beaurepaire Centre, the Baillieu Library, and the Russell Grimwade School of Biochemistry, Wilson Hall forms part of a large post-war group of campus buildings. Wilson Hall is a simple concrete frame rectangular box with brick infill and an east wall almost entirely of heat absorbing glass. The glass wall with steel frames is 36m long and 14.5m high. Sculptural reliefs include the mural on the internal wall above the dais designed by Douglas Annand and executed by Tom Bass and Alan Ingham called " A Search for Truth". The four stone sculptures mounted externally on the west wall are by Tom Bass. The copper clad pod on the south wall contains an organ designed by George Fincham in 1890. The etched and stained glass mural in the foyer is by Douglas Annand, the ceremonial chairs and lectern were designed by Grant Featherstone; a substantial bronze relief by Tom Bass is mounted externally on the north wall above the main entry and depicts "The Trial of Socrates".

Wilson Hall is of architectural, aesthetic and historical significance to the State of Victoria.

Wilson Hall is architecturally significant as an early and distinctive example of the post-war International Style. It was the first major public building in Victoria to combine ornament, artwork and detail within the strict visual tenet of the monumental form of the International Style. Wilson Hall was indicative of the development of aesthetics and architectural design with its monumental proportions, simple cuboid form, use of curtain wall glazing, lavish materials including the Swedish birch panelling and the black Italian marble and the extensive artwork both inside and outside the buildings. Wilson hall is a distinguished work of architects Bates Smart and McCutcheon, the practice that was derived from Reed and Barnes, architects for the original Wilson Hall. The monumental scale of the Wilson hall demonstrates the importance of a great hall in the ceremonial customs and ritual of a university.

Wilson Hall is aesthetically significant for the murals and sculptures of Tom Bass and Douglas Annand. The murals are integral elements of the building, and expressive of the meaning and purpose of a great hall and of a university, and demonstrate a notable application of decorative schemes.

Wilson Hall is historically significant the first major institutional building of note in Victoria after 1945. Built on the same site as the former Wilson Hall, the new hall was designed to fulfil the same central ceremonial role as its predecessor.

Wilson Hall is historically significant for the Fincham organ, an important and integral element of the hall. The organ was originally built in 1890 for the Australian church in Flinders Street and was re-erected at the Wilson hall in 1956 under the supervision of Sir Bernard Heinze. It has a strong historical association with the outstanding organ builder, George Fincham.