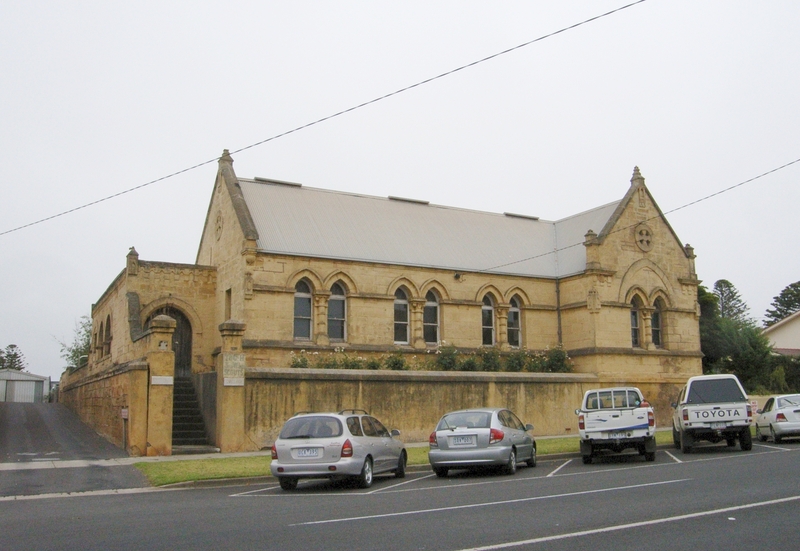 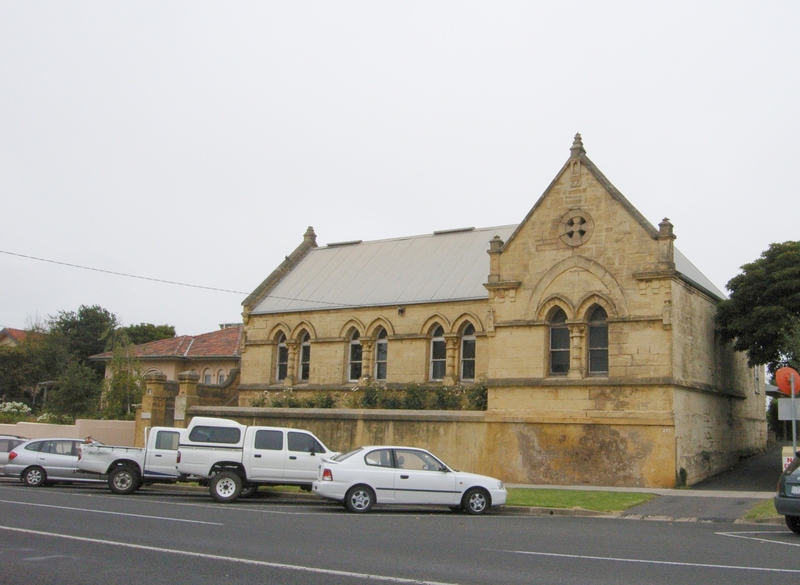 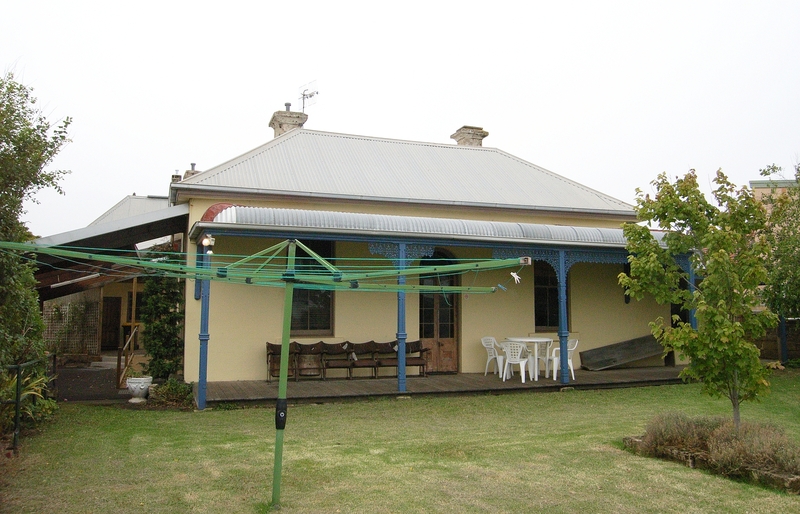 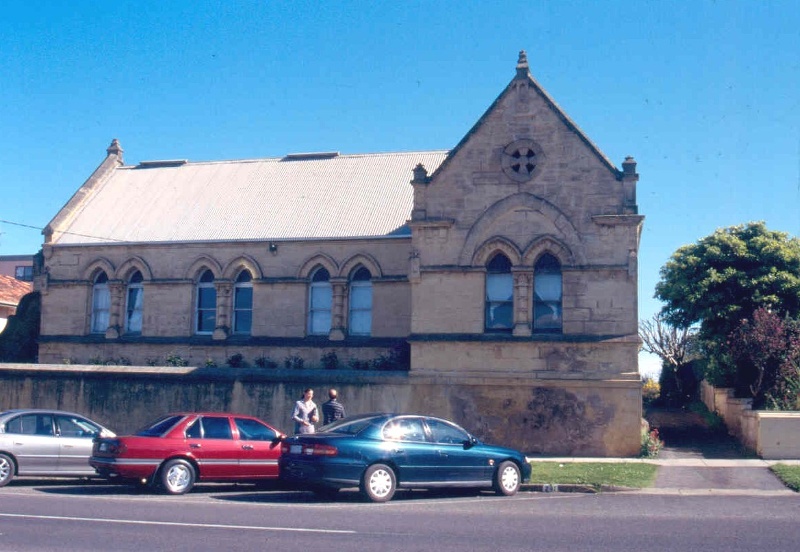 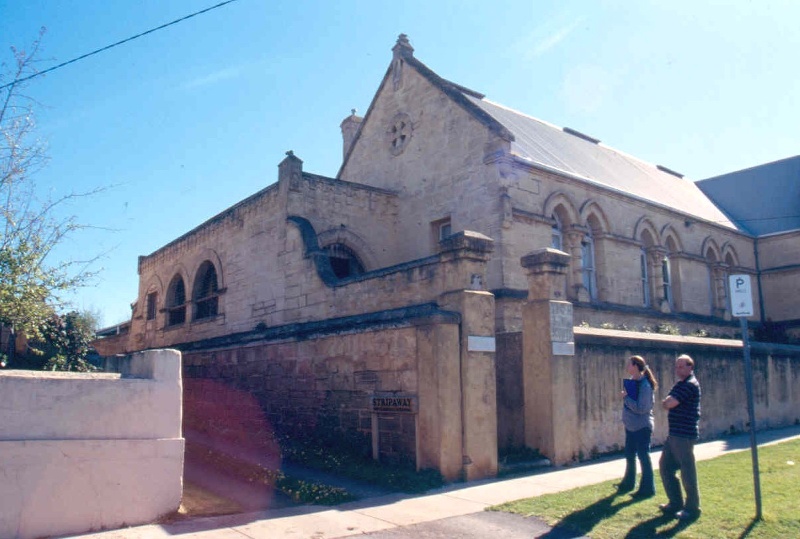 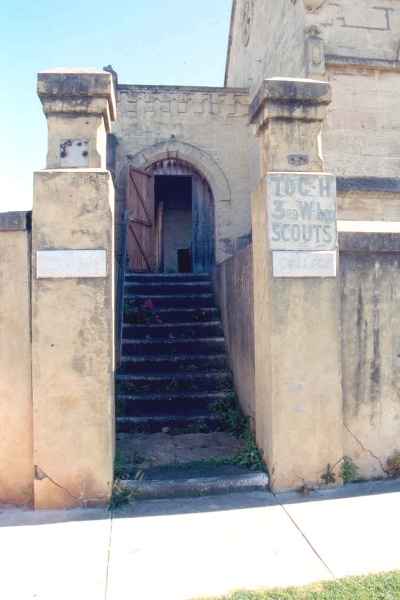 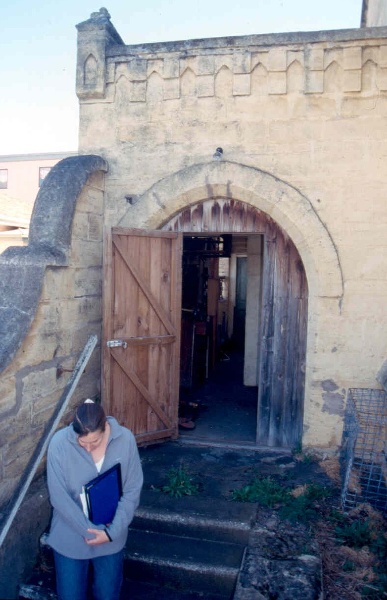 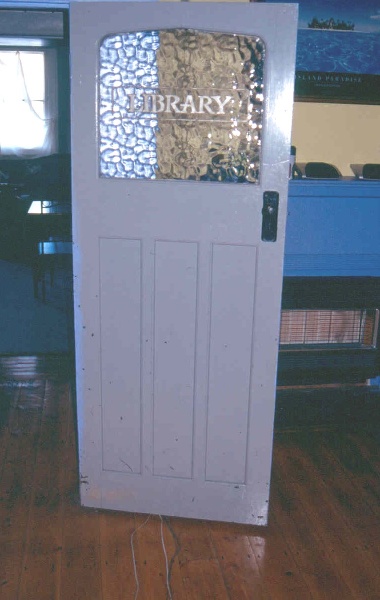 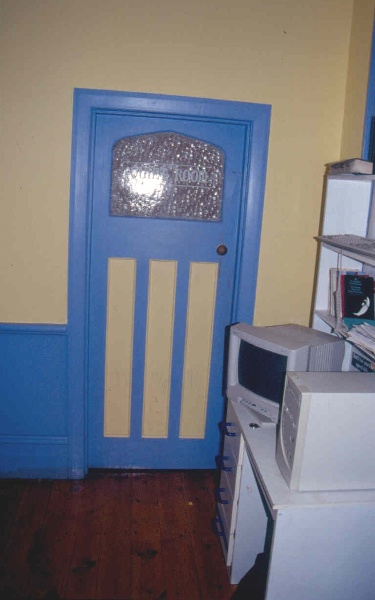 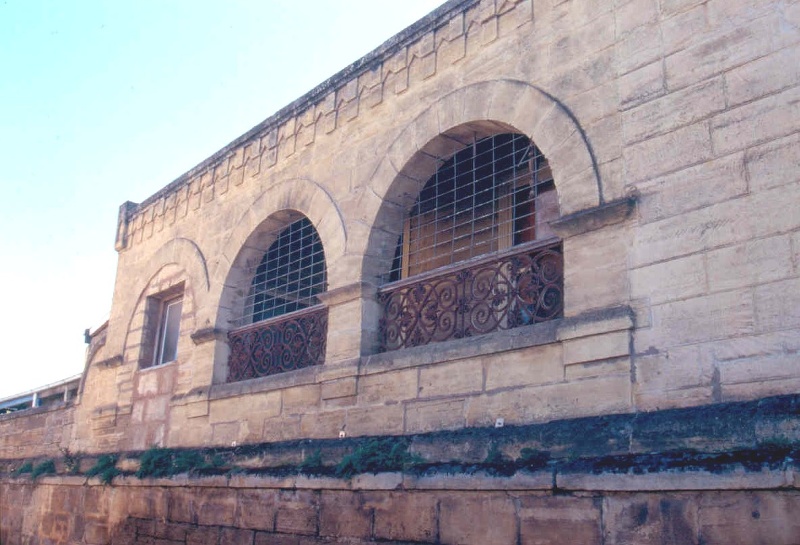 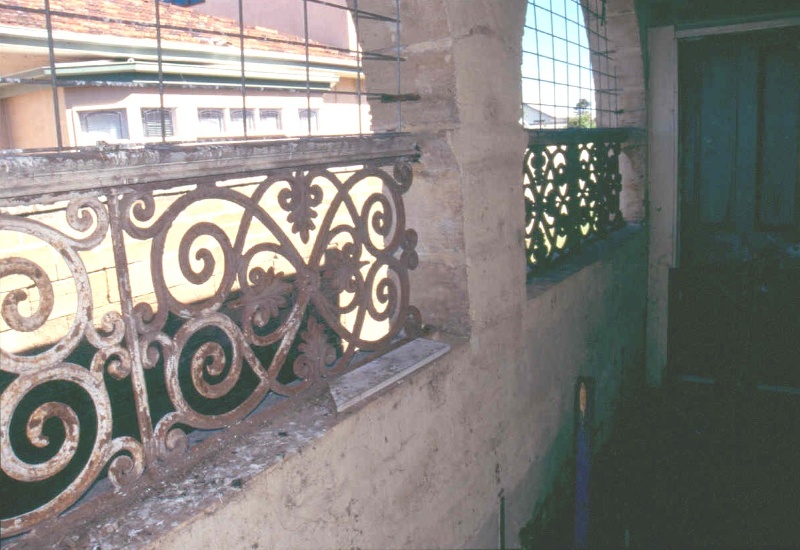 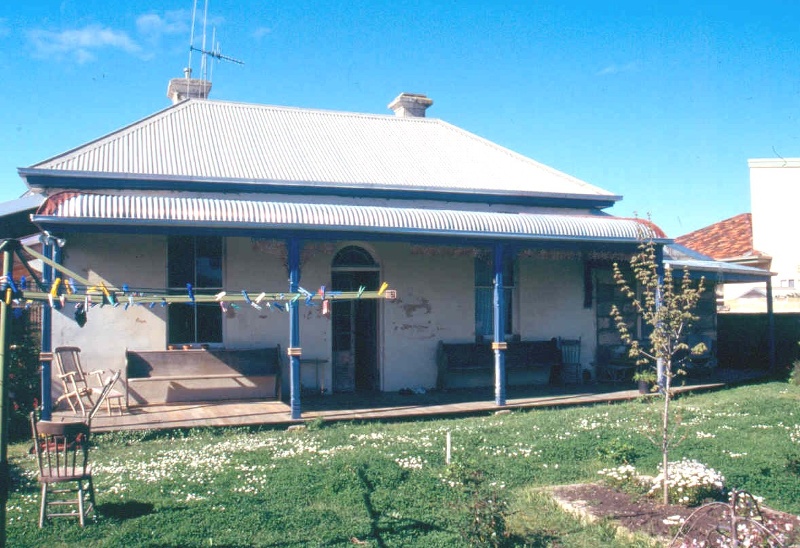 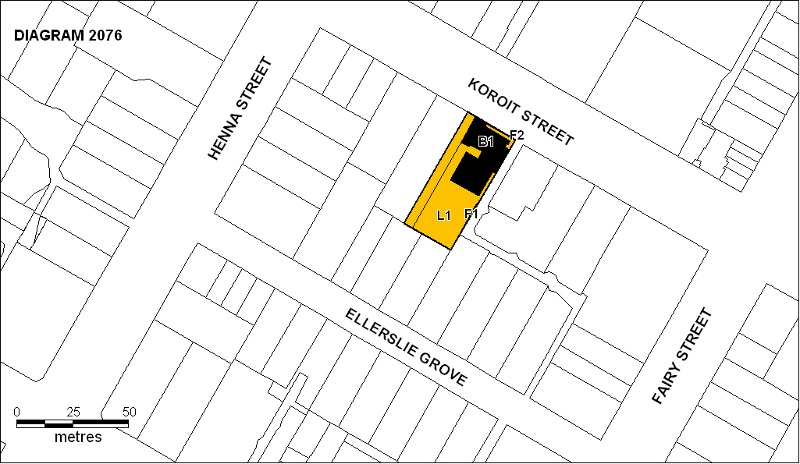 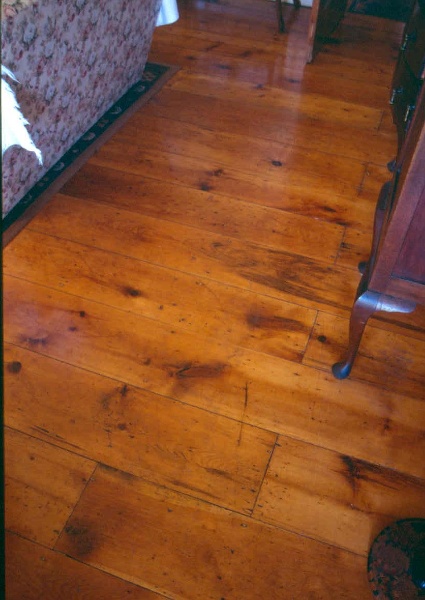 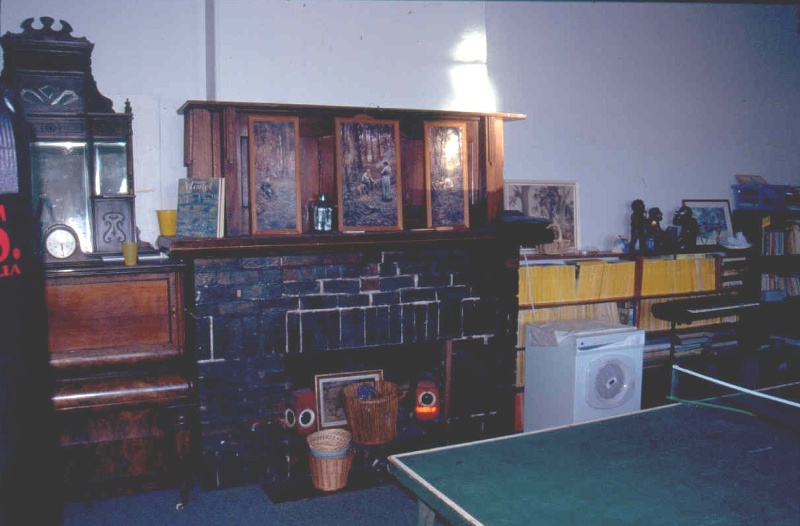 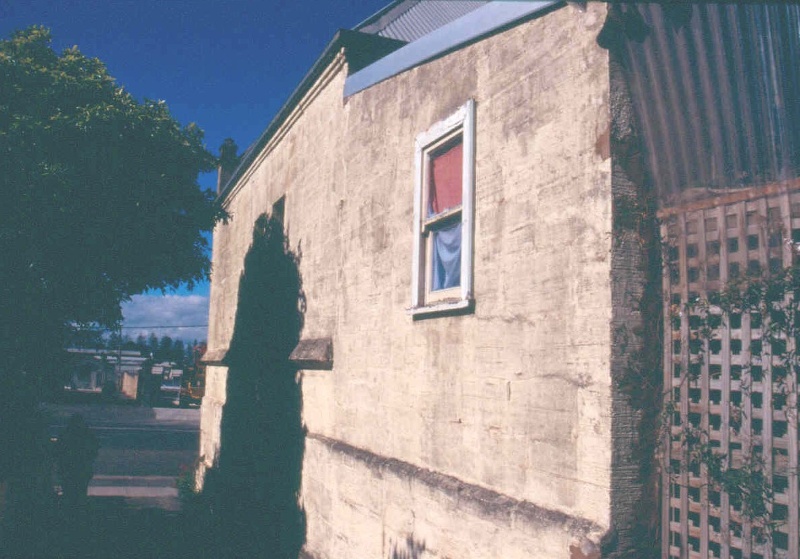 What is Significant?
Purpose built as a school in 1889, the hall of Ellerslie College is a two room structure constructed of local Merri stone. There is a single storey stone cottage attached to the rear of the hall which appears to be of earlier construction, probably c.1870. The hall was built in an early mediaeval style and is formed by two rooms in an L shaped configuration with gable ends. The place is entered through a round arched doorway into a parapeted entry foyer. The windows to the hall are double lancet in form with bulbous centre pilasters. Internally the class rooms are plain with timber lined ceiling following the line of the roof trusses. A number of internal doors illustrate the buildings past use with the sign "Library" painted on the glass of one door and "Quiet Room" on another. However it is unclear whether this is related to the place's use as a school or as a Toc H branch.

The use of the Gothic Revival style for schools was associated with high aspirations in learning and moral vigour, particularly through the promotion of Gothic Revival architecture by the Oxford Movement and the Cambridge Camden Society. The use of Gothic Revival also had associations to the prestige of the universities of Oxford and Cambridge. Its use can be seen in a range of educational buildings of the nineteenth century both in Australia and in Great Britain which draw references from early medieval to tudor architecture.

Ellerslie College was started by a Miss Davidson on the site sometime in 1886. The land and the original cottage building was owned by Henry Kemmis who had briefly run a school from 1871 to 1874 on the neighbouring property which had been previously been the home, known as Ellerslie House, of James Aitken a local merchant, and prior to that the Royal Archer Hotel. Kemmis owned the site of both Ellerslie House (Lots 5,6 & 7, Section 13) and the site of the later Ellerslie College (Lots 8 & 9, Section 13). Although Kemmis left Warrnambool to open a School in Bathurst in 1874 he continued to own Lots 8 & 9 until 1889 and Lots 5-7 until 1890. Presumably Miss Davidson's School was successful enough to warrant buying the land from Kemmis in 1889 and building the present hall.

Despite this, Miss Davidson only ran the school for a few years more before William Lawson took over in 1892. Lawson bought the place the following year and continued to run it as a school until 1902 when Richard Lawson and William Oakley briefly occupied the place as part of the Warrnambool Academy until 1904.

Up until the early twentieth century public education only catered for students at a primary level. Secondary education was catered for only by private colleges. Most of these were denominational, financed and run under the influence of the various major Christian churches. However, as well as these denominational schools were a number of smaller private colleges that also provided boarding facilities that catered for the needs and aspirations of the middle classes, and in rural areas the children of local landowners. Most often these small private colleges took over space in larger houses or occasionally hotels.

Warrnambool as a port was a major regional centre serving the surrounding grazing, farming and trading activities. Ellerslie College was one of many small private colleges that operated in Warrnambool in the nineteenth century serving this community. However it is rare to find an example of one of these colleges that was built especially for its purpose.

Apart from being a private college the hall housed the first classrooms of the Warrnambool High School (then Warrnambool Agricultural High School) for some months in 1907 and from sometime in the 1920's was the home of the 3rd Warrnambool scout troop which had associations to the Toc H movement. The hall was also the location of the first Lutheran services in Warrnambool from 1933. The place is currently a residence.

How is it Significant?
Ellerslie College is of historical and architectural significance to the State of Victoria.

Why is it Significant?
Ellerslie College is of historical significance as a rare example of a purpose built, non-denominational nineteenth century private school.

Ellerslie College is of architectural significance as a rare example of a building built to house a small private school. That the place was built in a Gothic Revival manner is of particular note.
Show more
Show less
All information on this page is maintained by Heritage Victoria. Click below for their website and contact details.