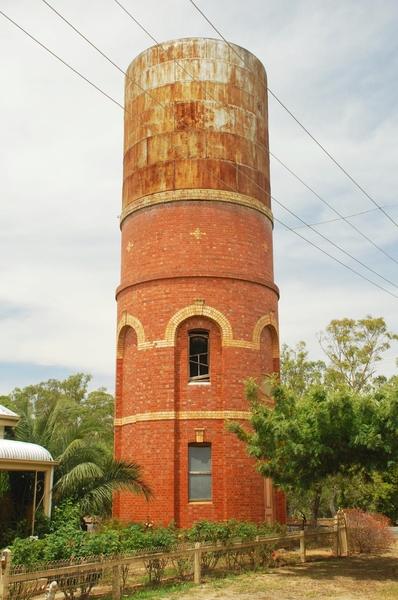 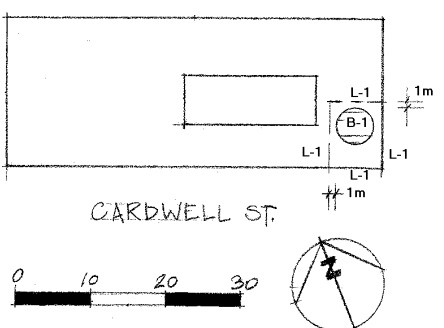 The Elmore Urban Waterworks Trust held its first meeting in February 1890 and by 1891 had acquired land at Cardwell St adjacent to the Campaspe River. The Trust had also appointed J.T. Noble Anderson as their engineer. Anderson was a graduate of a Dublin university, tutored at Trinity College, Melbourne and later became business partner of (Sir) John Monash. It was during his time at Trinity College that he drew up plans and specifications for the erection of the Trust's first water tower.

The Trust's contract number 1 for the erection of the tower was awarded to A Nelson contractor and work proceeded in the latter half of 1891. The tower erected was a circular red brick structure surmounted by a circular riveted iron tank. The tower has two levels of timber floors with a stop valve at the ground floor. Water pumped to the tank provided pressured reticulation through-out the town.

The tower remained in use until 1964 when the Elmore Water Board commissioned a new taller concrete tower.

The former Elmore water tower is of architectural and historical importance to the state of Victoria.

The Elmore Urban Waterworks tower is historically significant as a rare surviving remnant of early urban infrastructure in the settlement of Victoria. The tower provided reticulated water to the population of this small country town in a continent noted for its dry environment.

The tower is also of architectural and engineering significance in its ability to display 19th century approaches to technology and art particularly given the need to erect this structure in an urban setting, and in its rarity as an industrial building type. The tower is also a fine example of the skills of 19th century bricklayers.