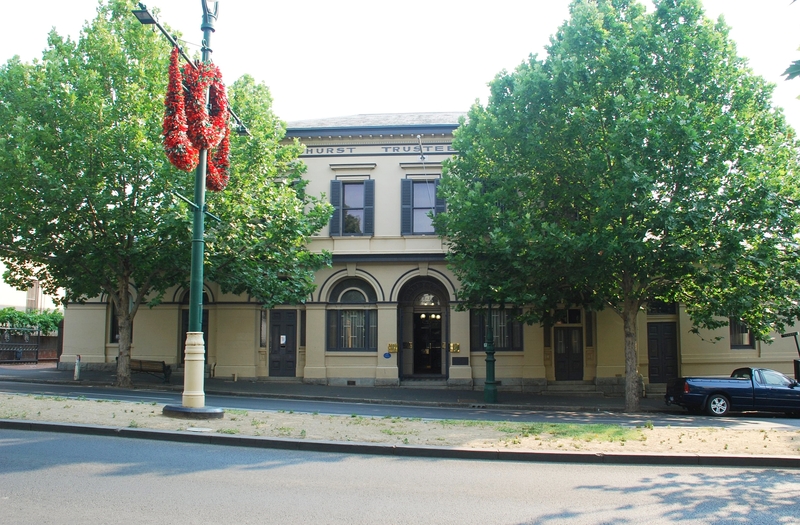 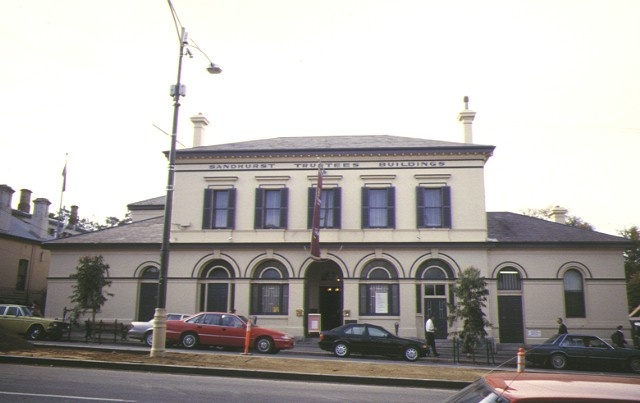 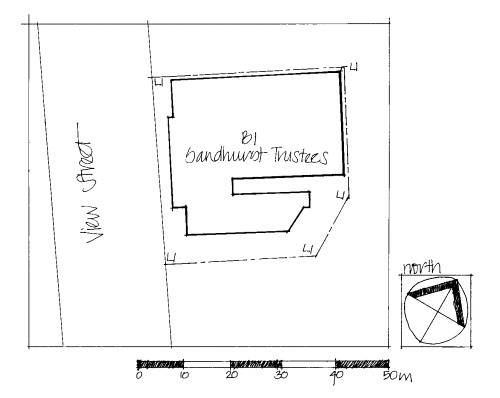 The Sandhurst Trustees building was constructed as the first permanent post and telegraph office for the developing town of Sandhurst (now Bendigo) in 1867 to designs prepared by the Public Works Department under William Wilkinson Wardell. The two storeyed rendered brick building, prominently located on View Street, has a hipped roof and one storeyed bays flanking the principal building. The building is an example of early Victorian classical architecture. In 1891, after a new post office in Pall Mall was completed, the Sandhurst and Northern Districts Trustees Executors and Agency Company purchased the building and used it for their offices which they remain to this day (2015). To accommodate the growing company additions the building has experienced several periods of growth. The principal chamber, centrally located in the building on the ground floor upon entering the building, is a particularly intact late nineteenth century interior with very fine timber joinery, including wainscotting, internal columns, ceiling detailing, doors, architraves and a counter are of good design and craftsmanship.

The Sandhurst Trustees Building (the former Sandhurst Post and Telegraph Office) is of historical, architectural and aesthetic significance to the State of Victoria.

The building, which reflects the first stages of Bendigo's development as a town following the discovery of gold, is historically important as a substantial public works project completed when renowned Victorian architect, William Wilkinson Wardell was the Inspector of Public Works and Chief Architect. For over one hundred years the building has been the home of an important Bendigo based company, the Sandhurst Trustees, who now have branches throughout Victoria.

The building has architectural importance as a well composed masonry structure which contributes, and indeed, established the standard for the design and massing of later buildings on View Street. The intact nineteenth century interior of the building is of particular aesthetic importance for its well crafted joinery and plasterwork.