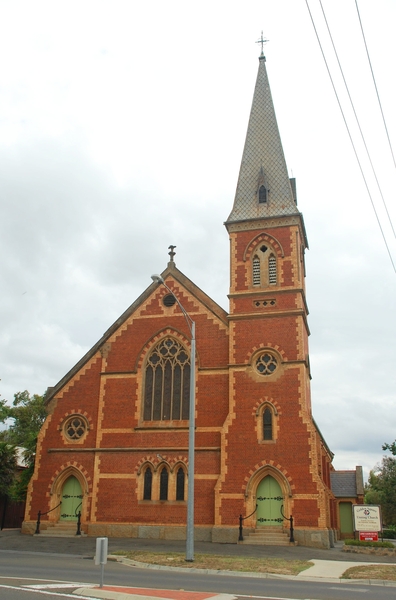 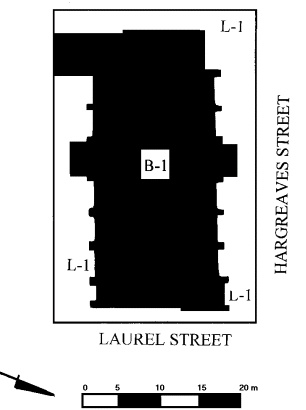 The Uniting Church at Golden Square was built between 1870 and 1873 to replace an earlier church. In March 1852 James "Jimmy" Jeffrey, a digger, had preached on a tree stump near the site of the present church in Golden Square. In the same year, Rev Symons, stationed at Castlemaine, purchased a modest timber building at Golden Square which was the first Wesleyan Methodist church in Bendigo. This was replaced in 1859 by a larger stone building. Eventually the congregation outgrew this church and plans were made for a new one.

The architects Crouch and Wilson designed the church, with Messrs Johns and Hinley as the contractors. The foundation stone was laid by mining entrepreneur Richard Allingham on 5 January 1870. The church was built in two stages - the first section built at the rear of the existing stone church was opened for worship on 11 May 1870. The additions were advanced enough for services to be held early in 1872 and the building was finally completed in 1873. The church is a large Gothic style building in bichromatic brick with a slate roof. It is dominated by a corner tower with bellcast eaves surmounted by a tapering spire and a five-light Decorated Gothic west window. There are two porches on either side and a vestry at the east end. A chimney rises from the vestry.

The Uniting Church, Golden Square is of architectural and historical significance to the state of Victoria.

The church is architecturally significant as a representative and intact example of a church by Crouch and Wilson, one of the most influential ecclesiastical and organisational firm of architects in Victoria in the 1860s and 1870s. It is dominated by a corner tower with bellcast eaves surmounted by a tapering spire and a five-light Decorated Gothic west window. The interior demonstrates fine craftsmanship in its carved walnut pulpit flanked on either side by a flight of steps and adorned by a wrought iron balustrade and the similar wrought iron sanctuary railing; the gallery with its cast iron balustrading; and the ceiling trusses and the fluted columns.

The church has historical associations with the Wesleyan church in Victoria and its scale and quality demonstrates the strength of the denomination in the goldfields. Built to accommodate over 1200 people and known as the "cathedral of Methodism", for many years this church dominated the surrounding landscape.