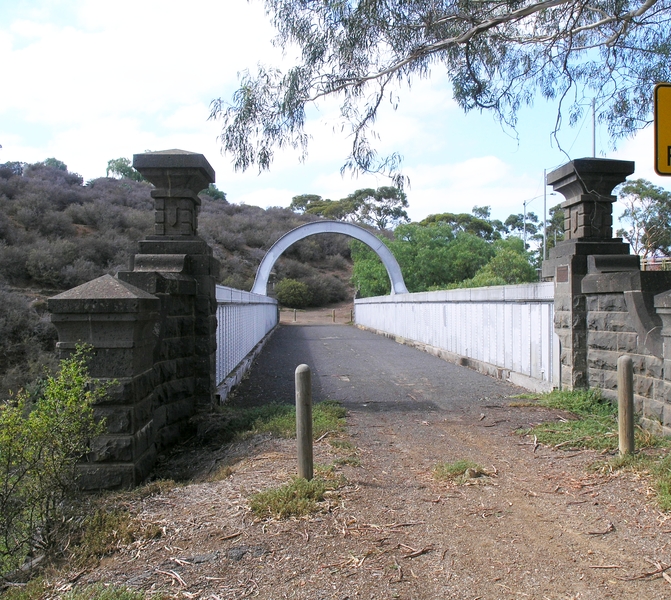 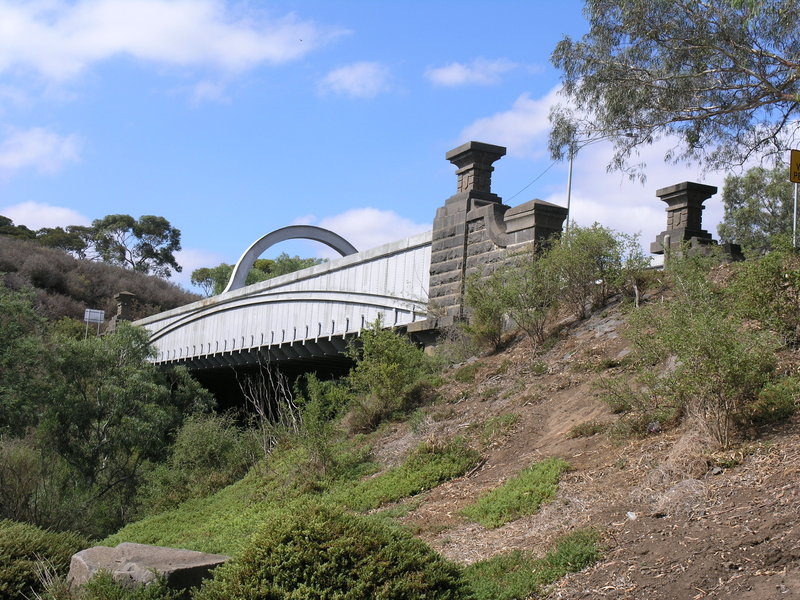 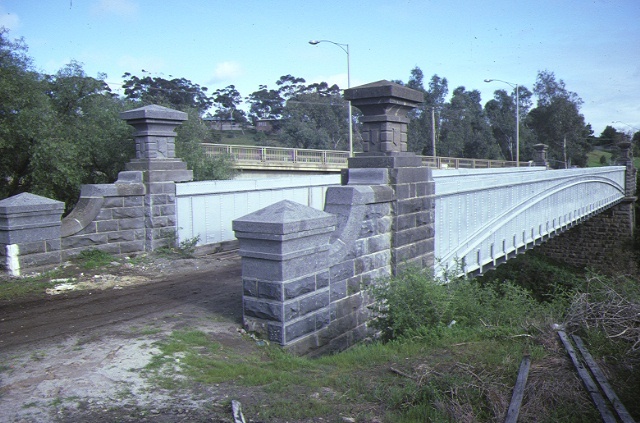 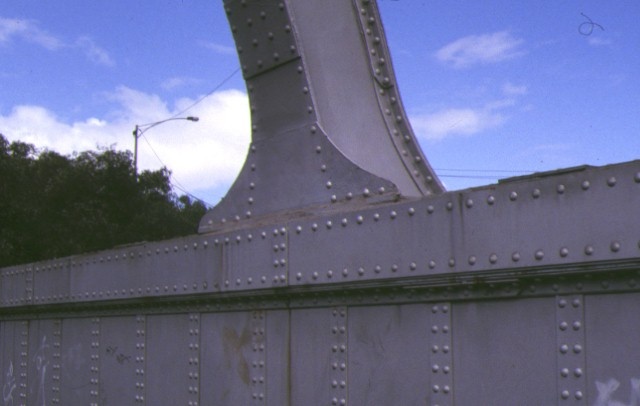 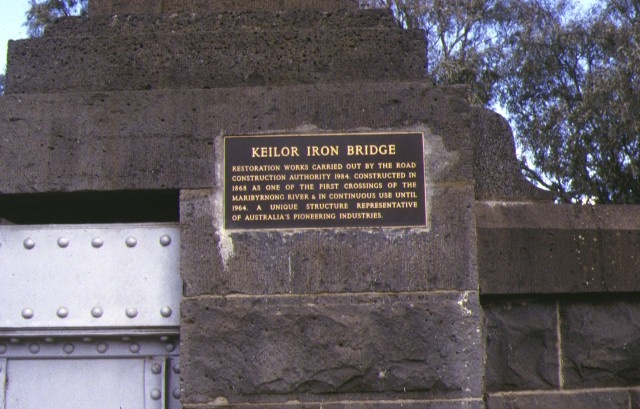 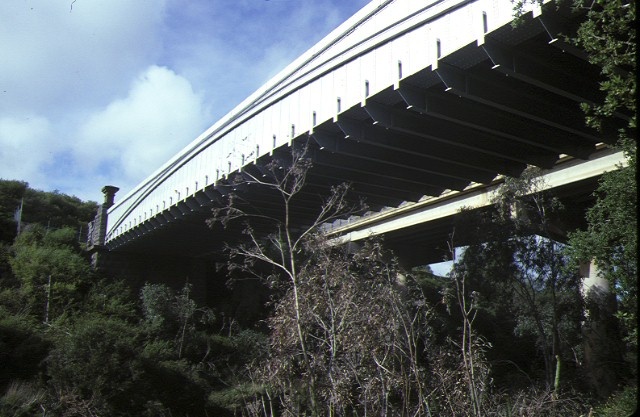 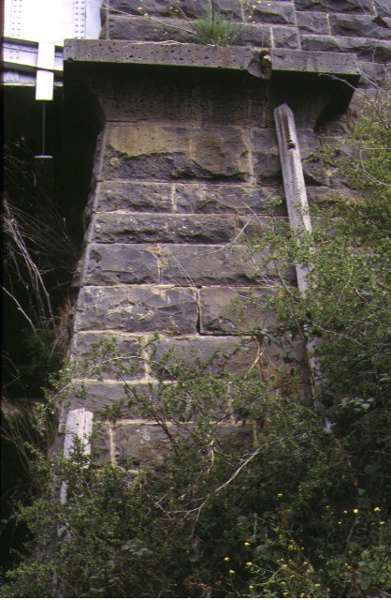 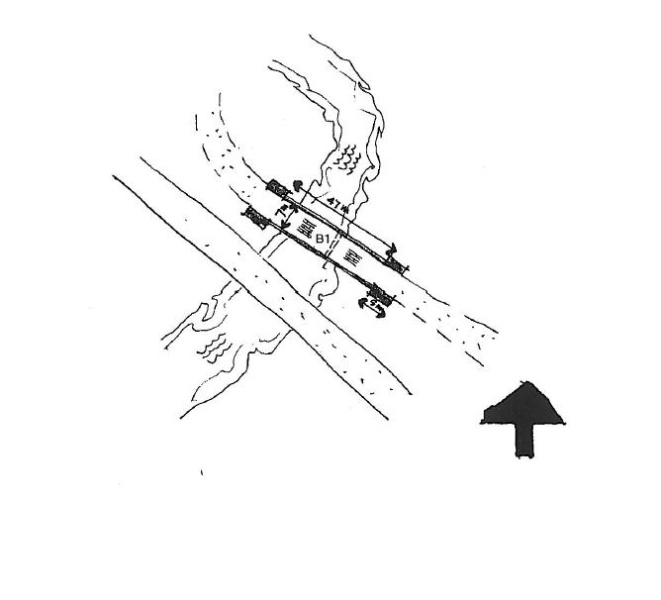 There is some conjecture as to the origins of the idea for a bridge in this particular location; however it is generally accepted that the Iron Bridge over the Maribyrnong River was fabricated in situ in 1868. Mr Enoch Chambers won the contract let by the Keilor Districts Board in that year. The Engineers of the bridge were Browne and Son of Campbellfield. The iron bridge consists of box girders with reinforcing arches in the web and the long span is comprised of box girders stabilized with arched stiffeners constructed in steel sections. The bluestone abutments are highly decorative and are capped by carved piers with crown stones. The bridge's timber deck was re-planked in 1897, however the structure remained virtually untouched until the 1950s when the cross arch was removed, cross beams were strengthened and 1'' thick asphalt was laid on the timber decking. The bridge was damaged in 1963 when a commercial vehicle became jammed under the arch. The arch was consequently removed but it has since been reconstructed as part of recent restoration works to the bridge.

The Iron Bridge over the Maribyrnong River is of architectural significance to the State of Victoria.

The Iron Bridge over the Maribyrnong River is architecturally significant as a rare example of a substantial iron bridge. Although reminiscent of bridges overseas, the design was adventurous and experimental for its time and had no direct comparisons in Victoria. The combination of the arch, box girders and the additional transverse arch are particularly unusual. The only other bridge known to be of a similar construction is the Robert Stephenson's High Level Bridge at Newcastle which was constructed 1845-9. The iron bridge over the Maribyrnong is a rare and exemplary illustration of contemporary engineering practices in Victoria in the late 1860s and acts as an important cultural marker of the historic townscape of Keilor and the Maribyrnong River.

The foundations and abutments of this bridge date from 1853

This was originally the significant timber Howe Truss "Brees Bridge" constructed on these bluestone abutments in 1853-54, and the engineers were George Holmes and Edward Richardson. See more details in the research papers on these engineers at: https://www.ipenz.org.nz/Heritage/Conference2014/Proceedings/McInnes%20and%20Frost%20paper%20%28500%20KB%29.pdf