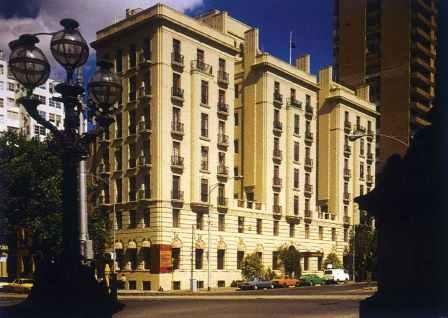 Individual Statement of Significance: Built 1928 -30 by the eminent Melbourne architectural firm, A & K Henderson, Alcaston House is of state significance for two reasons. Firstly, it is an important early twentieth-century example of combined offices and flats, for no other building of the era provided a similar mixed use commercial and multi-storey residential accommodation. Important features include innovative planning, detailing and services such as plenum heating, delivery cupboards and garbage chute which were contained within vertical shafts.
Secondly, located within the prestigious and important parliamentary precinct, Alcaston House responds to its context with a classical revival style and appropriate scale. Associated with the medical profession from its inception Alcaston House typifies traditional usage patterns for this end of Collins Street which since the nineteenth century has housed medical and associated professions.
Classified: 08/07/1976
Group Statement of Significance: A group comprising four low-rise buildings of dates from 1872 to 1938 with a noteworthy sympathetic relationship in the colour and texture of the masonry, the proportion of the windows, detail of balconettes and rustication of ground and/or upper facades. The scale relates to that of the buildings opposite. B3905 - Anzac House, 4 - 6 Collins Street: B3906 - Portland House, 8 Collins Street: B3919 - Victor Horsley Chambers 10-12 Collins Street.
Group Classified: 08/07/1976