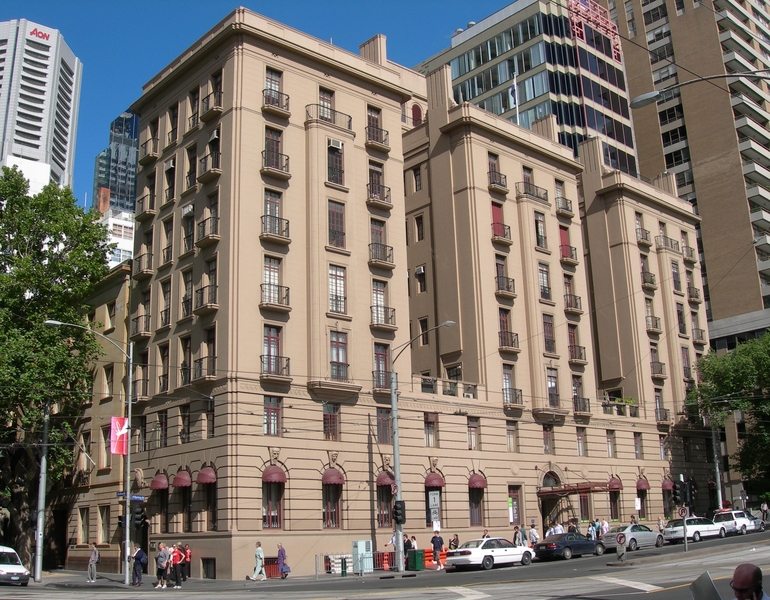 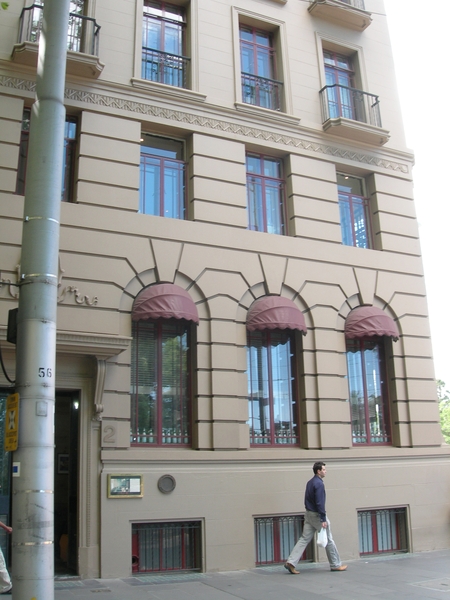 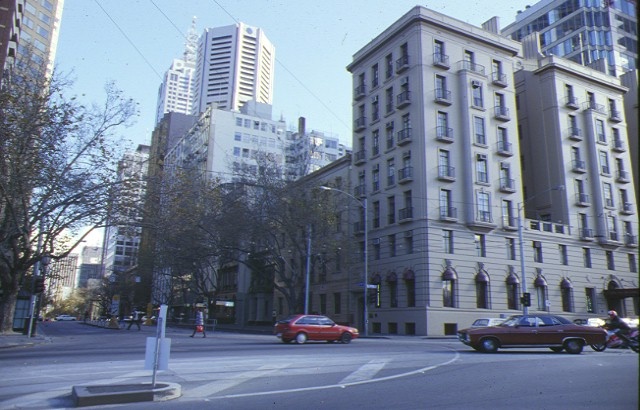 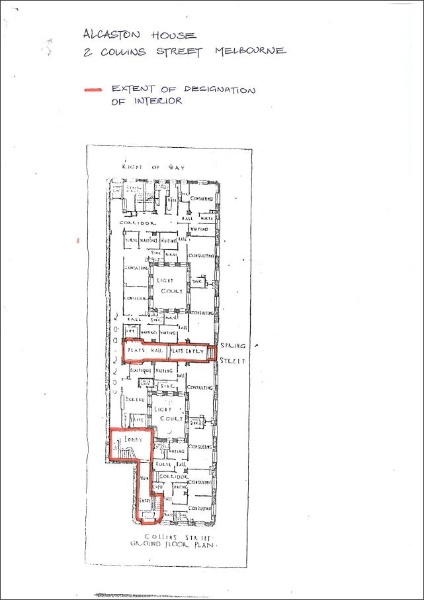 Alcaston House was designed by the firm of architects, A. and K. Henderson and erected by T Donald and Co. in 1929-30. The building was erected for the trustees of Dr. EM James, whose home had previously occupied the site. Alcaston house is a seven-storey building with basement and is constructed of reinforced concrete columns, beams and floors with a freestone base and brick walls above, all rendered with a sand finish stucco. All the windows are steel-framed and those on the ground floor are double-glazed to prevent noise intrusion. The building was designed with a rusticated base of two floors expressing the professional nature of Collins Street, with the upper floors in an "E"-plan, exposing the light wells on the Spring Street facade. The light wells are both a functional and expressive device, denoting the residential nature of the upper part of the building. This is further enhanced by the provision of balconettes to the French windows of each of the flats. Each of the towers is marked by deep cornices and the tall multiple-chimney stacks. The timber pergolas that shaded the roof garden and the urns on the parapet have since been removed. Prominent features of the lower facade are the semi-circular arched windows on the ground floor with stylised voussoirs and carved key-stones, the chevron string course and the cantilevered canopy over the Spring Street entrance.

Alcaston House is of architectural and historical significance to the State of Victoria.

Alcaston House is of architectural significance for its combination of Renaissance Revival motifs within an essentially "modern" framework and for the way in which its design expresses its mixed uses. The use of detailing such as the smooth rustication and round-headed windows and the colour of the main structure complement the other buildings in this important precinct, especially the Old Treasury. The main body of the building is broken into three parts, reducing the impact of the large surface areas, as well as providing light bays for the flats. The Collins Street facade, with its bracketed overdoors and masks set into keystones depicting Aesculapius and Hygeia, reflects the fact that this is the entrance to the professional chambers which make up the base of the building. The Spring Street facade, the entrance to the flats, with its grouped chimneys and ?E?-shaped form, is reminiscent of English great house design. Alcaston House is not only a successful architectural statement in its own right; it is also an attractive, urbane component of the Treasury Precinct and the Collins Street streetscape.

Alcaston House is of architectural significance as an important work of the architectural firm A. and K. Henderson, an influential company known for its sympathetic designs.

A & K Henderson were responsible for, amongst other things, the T&G Building, the first major building in Melbourne to reach the 132-foot height limit and raise a tower above it as an architectural feature.

Alcaston House is of historical significance as an early and important example of multi-storey residential accommodation in the city at a time when the post-war preference for flat living in Europe and the USA was becoming manifest in Australia.