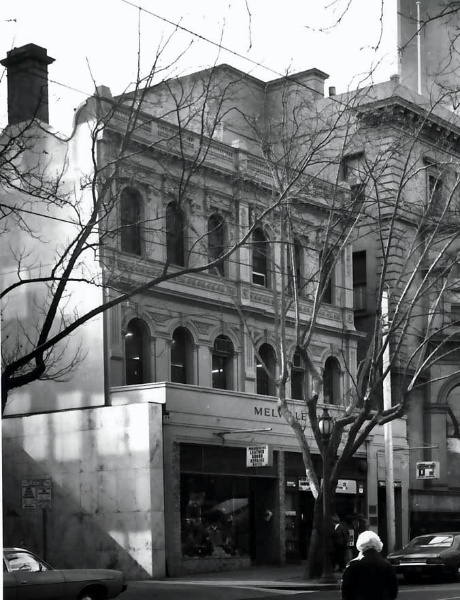 Melville House. 52-54 Collins Street, Melbourne, was erected in 1881. The building consists of a pair of three-storey, brick and stucco structures and originally served as residences and professional premises. Stuccoed details of note include the first floor round-headed windows framed by columns, impostand at second floor level the decorative band beneath the windows and the hoods.
The surviving original portions of the facade of Melville House are typical examples of domestic Boom Style architecture. The decorative features, particularly the combined architrave and impost moulding, which doubles as an entablature, are interesting, but not distinctive. The building is one of the few surviving nineteenth century residences in the Central Business District of Melbourne.
New shop fronts have been incorporated into the ground floor.
Classified: 15/07/1976
Revised: 11/02/1985