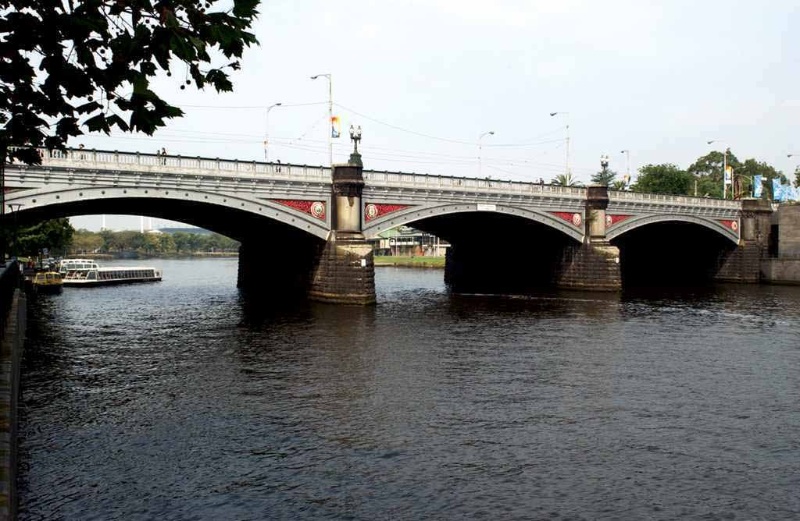 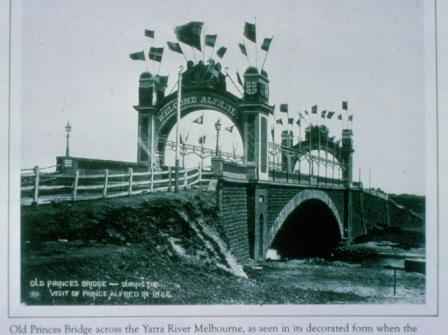 Princes Bridge, designed principally by the firm of Grainger, D'Ebro and Jenkins, built by David Munro & Co., and completed in 1888, is of State historic, social, architectural and technical significance, as the most grandly conceived and one of the most ornate 19th century bridges in Australia, and one of the major landmarks of Melbourne. First conceived in 1879 to replace a smaller single arched stone bridge (the second on the site), the third Princes Bridge was designed to create an impressive gateway into the city from the south. Constructed at the same time as the doubling of the width of the river, the bridge is long and wide, providing a generous platform from which to admire the city skyline. It was one of the major civic projects undertaken in the 1880s, a major reminder of the prosperity and ambitions of the boom era. Being a direct extension of Swanston Street, it also forms part of a major city axis, which runs from the former Carlton Brewery site to the Shrine of Remembrance. With cable tram tracks integrated into the design during construction (and converted to electric in the 1920s), and being one of the few river crossings connecting the populous south-eastern suburbs via the elegant treelined St. Kilda Road directly to the retail heart of the city, Princes bridge has been a major traffic artery for well over a century. It has also been considered a major landmark structure in Melbourne since its construction, despite the fact that it can only be properly viewed from the river banks. It often features in illustrations of Melbourne landmarks, such as postcards, confirming its status as one of the most important structures in the city. While it was designed by a noted architect, and built by one of the most prolific builders of the 19th century, the design is not entirely original. The main design features are extremely similar to those of Blackfriars Bridge in London, which was completed in 1860. Particularly notable elements include the design of the piers as giant half columns with Gothic influenced capitals, medallions of the coats-of-arms of the various councils that contributed to its construction costs (in the cast iron filigree in the spandrels), and the cast iron balustrade and supporting brackets. The cast iron lamps, added in the 1920s (probably based on the 1890 gas lamps on the Princes Walk balustrade) are also an important element. The engineering of the bridge is not adventurous, but is notable for the size and solidity of the structure, and the extensive use of cast iron for the decorative facings.
Classified: 'Local'11/03/1971.
Revised: 02/02/1998