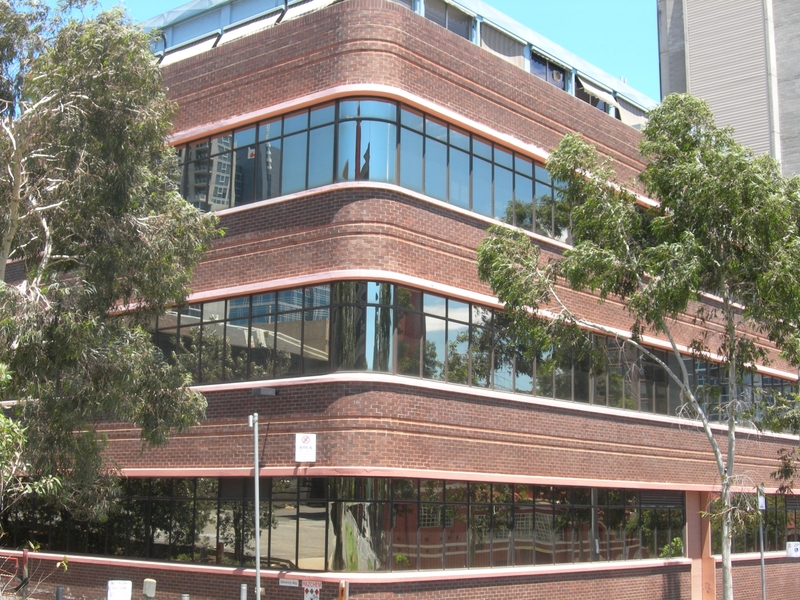 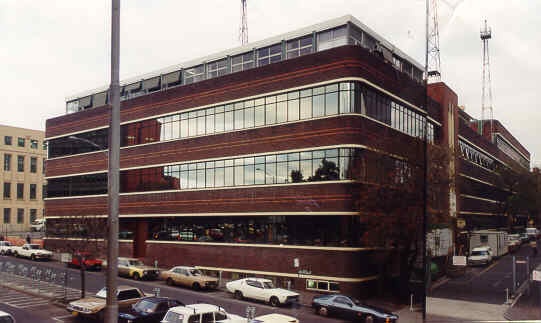 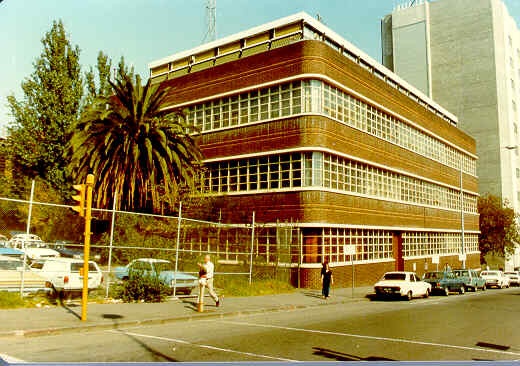 RMIT Building No.9 was designed by the Public Works Department under the jurisdiction of Chief Architect Percy Everett. It was built in two stages, the first part of which was for the Electrical Trades School and was opened in 1938. This building housed the Radio School and the original tower antenna survived until 1996. The second, northern part of the building has a facade to Franklin Street and was completed in 1941. The building is constructed with a frame of concrete-encased steel and reinforced concrete with brick cladding. The horizontal emphasis of the building is accentuated by continuous bands of brick spandrel panels and windows. The curved corners further emphasise the streamline design. In contrast to the shining, salt-glazed manganese bricks used on the main body of the building, the entrance tower is constructed of paler, unglazed bricks. The entrance tower provides a vertical counterpoint to the building with overtones of neo-Gothicism given by the protruding vertical fins dividing the double height window. The basement was enlarged during the Second World War and used for defence training. The original multi-panelled, steel framed windows were replaced in 1983 with plainer reflective window panels, and a variety of lightweight structures have been added to the roof.

RMIT Building No.9 is of architectural significance to the State of Victoria.

RMIT Building No.9 is architecturally significant as one of the few large public building designed in the streamlined horizontal Moderne style. The style epitomises the architect Percy Everett’s design approach to technical schools and was considered appropriate as a modern and state-of-the-art idiom suitable to technical training. The construction is noteworthy for its unusual treatment of materials, favouring face brickwork clad over a concrete frame, which is in contrast to other architects’ preference for an overall concrete and cement finish to horizontal Moderne buildings.