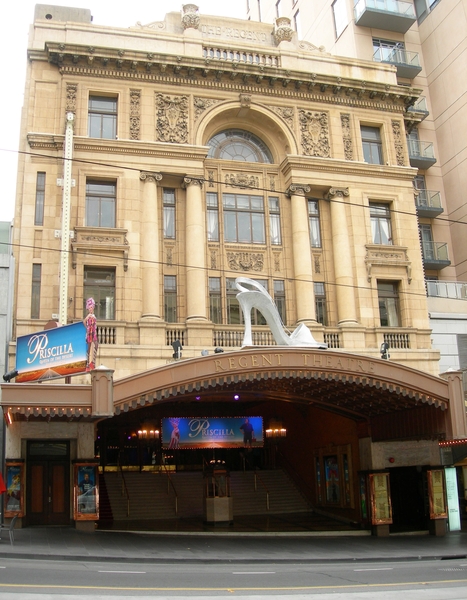 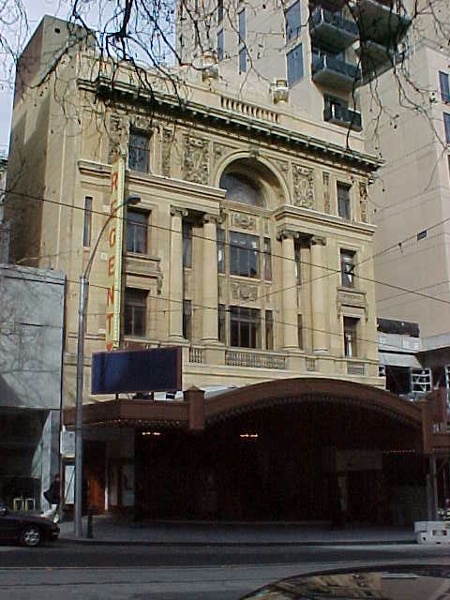 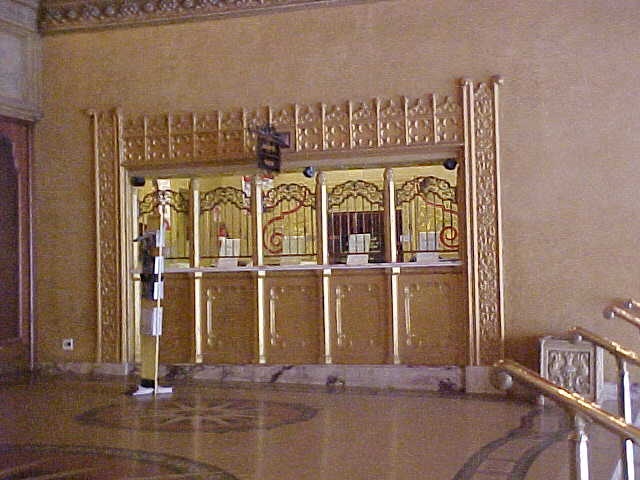 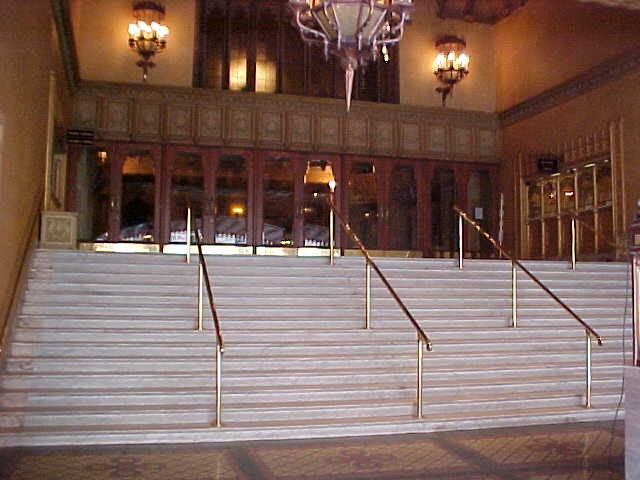 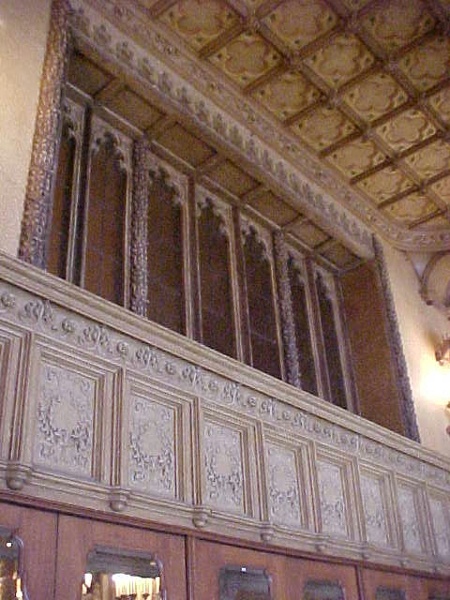 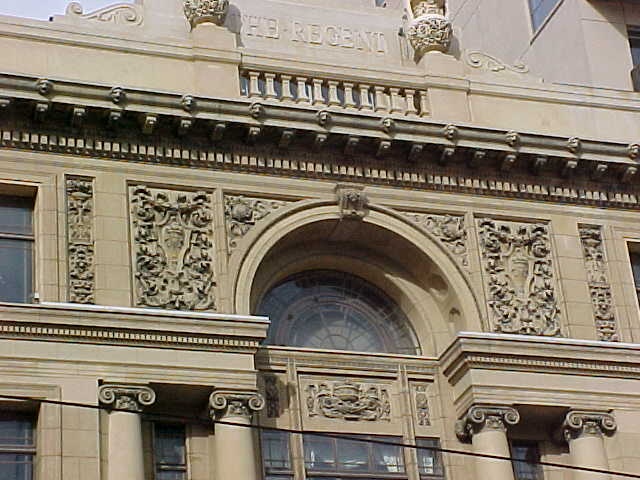 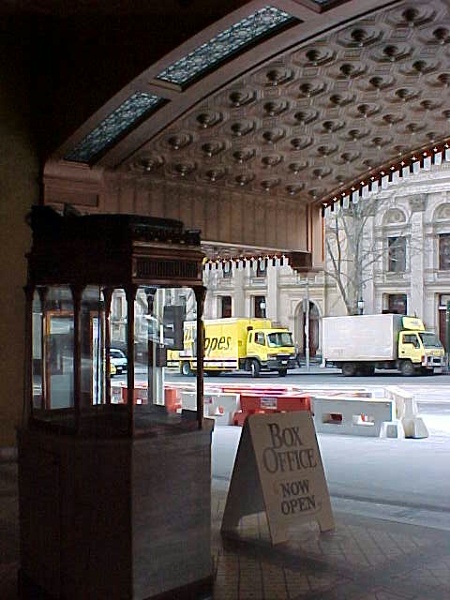 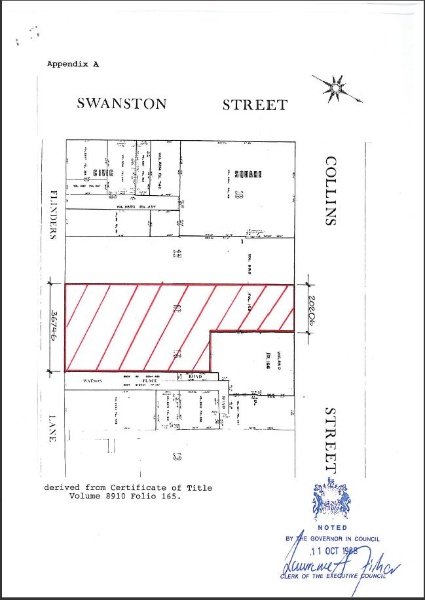 The Regent Theatre was designed by Cedric Ballantyne and built by James Porter & Sons, and opened in 1929. Ballantyne combined Spanish Gothic and French Renaissance styles to produce one of Victoria's largest and most lavish cinemas in the inter-war period. The auditorium, surmounted by a domed ceiling and flanked by colonnades, provides a handsome spectacle in which, because of careful detail, the large scale of the enclosed space is not immediately apparent. The foyers and promenades are decorated in exaggerated styles, reflecting the ostentatious nature and romanticism of the cinema industry at that time, although they combine to enhance the splendour of the auditorium. The basement-level Plaza Theatre, replete with references to Spanish Baroque and medieval styles, was originally intended to be a Cabaret and was built with side promenades for dining and drinking and with a large central dance floor. But the failure to obtain a liquor license led to its conversion to a cinema. The main auditorium of the Regent was destroyed in a fire in 1945 and rebuilt in 1947 under the direction of Cowper, Murphy and Appleford, architects. The re-creation of the plaster mouldings was the work of James Lyall. Such a large cinema became increasingly costly to run and in 1970 it closed its doors, having been sold to the Melbourne City Council to be redeveloped as part of its City Square project. What followed was 25 years of deliberation and conflict over demolition or restoration plans, before the fully refurbished theatre, resurrected by theatre entrepreneur David Marriner and Allom Lovell and Associates, was re-opened in 1996. The Plaza became a function venue, and the main auditorium a major live theatre venue.

The Regent Theatre is of historical, social and architectural significance to the State of Victoria.

The Regent Theatre is of historical significance as evidence of the character of popular entertainment and culture in Melbourne in earlier decades of the 20th century. Although the theatre no longer hosts films, its grandeur and extravagance are tangible reminders of the excitement of the cinema-going experience in the early years of the cinema industry. Such elaborate theatres made going to the cinema more than just a matter of passively watching a film. The atmosphere and decor of the building was part of the enjoyment, as was the music provided by the Wurlitzer organ, and the Regent soon became one of the most popular social and entertainment facilities in the city. Its popularity was such that after a disastrous fire in 1945 that destroyed the auditorium, the State Government lifted post war building restrictions to allow it to be completely re-constructed, almost as originally designed.

The Regent Theatre is of historical significance because of the major role it played in the development of the cinema industry in Victoria. The Regent was the flagship of the nation-wide Hoyt's cinema chain, which consisted of large, palace-style 'Regents' in every capital and large country town. With the second, separate Plaza cinema in the basement, it was the first, and for many years the only, double cinema complex in Victoria. The Plaza was the first cinema in Australia to install the wide screen Cinerama in 1958. The complex also served as an administration centre for the Hoyt's chain, with the building including offices and a small private viewing cinema.

The Regent Theatre is of historical significance because of its associations with Frank Thring Snr., who established the nation-wide Hoyt's cinema chain in the 1920s and in the early 1930s created 'Efftee Films', Australia's major film production company of the era.

The Regent Theatre is of social significance because of its involvement in the conservation battles of the 1970s that contributed to the creation of Victoria's historic buildings legislation, the first in Australia. The theatre's popularity led to it becoming the subject of Melbourne's longest running conservation debate, when, after closing in 1970, Builders Laborers Federation bans prevented its demolition as part of the development of a long-sought city square. The Regent then remained empty for over 25 years as debate raged over its future and the design of the square. The Plaza was incorporated in the square development, but it wasn't until 1996 that the Regent was reopened after extensive restoration work. The long preservation battle over the Theatre provides an interesting tale of changing attitudes to heritage protection. Originally not considered architecturally significant enough to be incorporated on the Historic Buildings Register in the 1970s, greater acceptance of 20th century buildings and of the concept of social and historic significance as distinct from architectural significance, led to the registration of the theatre in 1988. The heritage battles that were fought over the Regent and other historical buildings in the early 1970s forced the State Government to introduce a system to register and protect historic buildings in 1974.

The Regent Theatre is of architectural significance as one of the best surviving examples of an inter-war period picture palace in Australia. Its imaginative combination of styles and sumptuous and spectacular interior spaces are a fine example of cinema architecture, providing an early 20th century example of architecture purely in the service of entertainment.