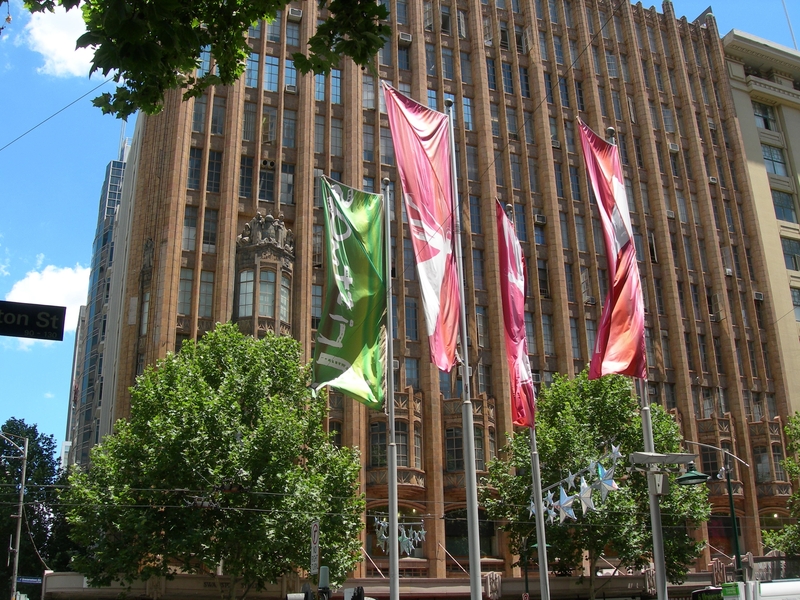 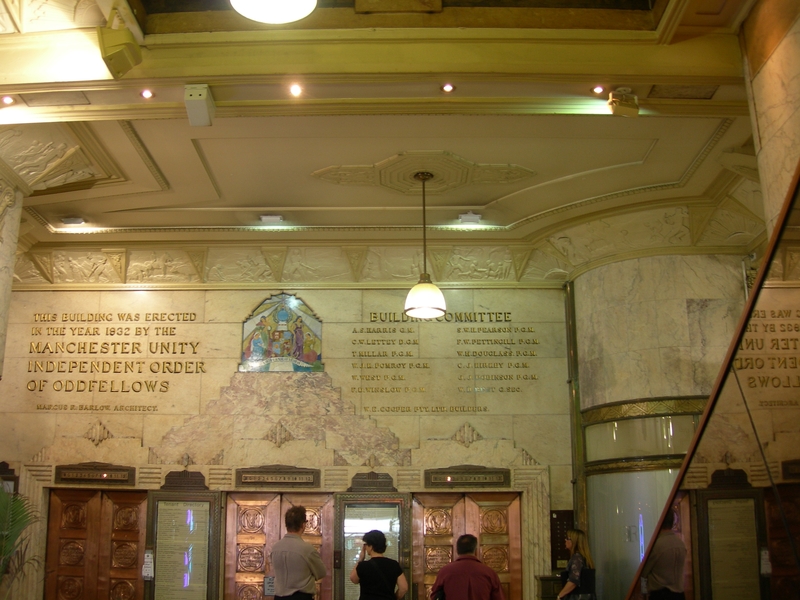 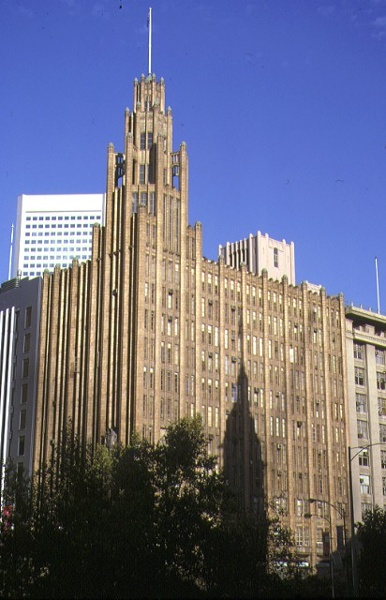 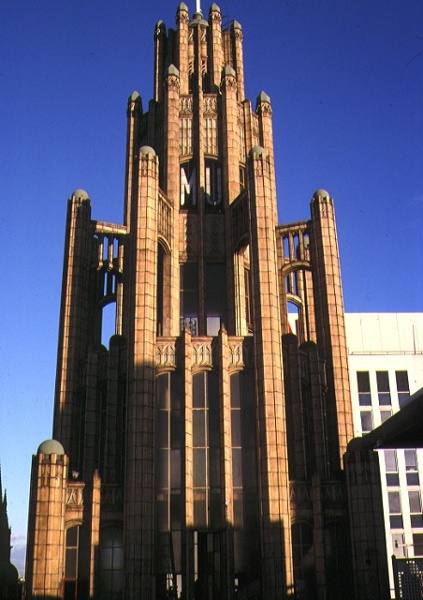 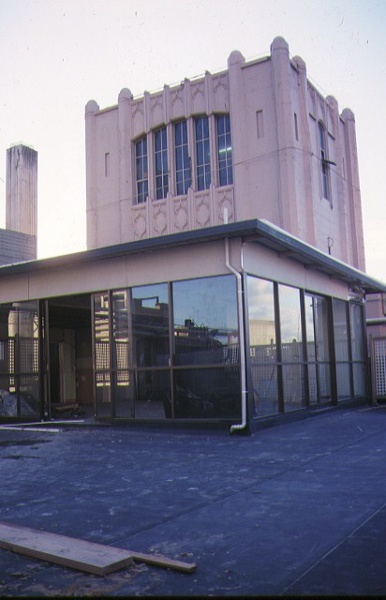 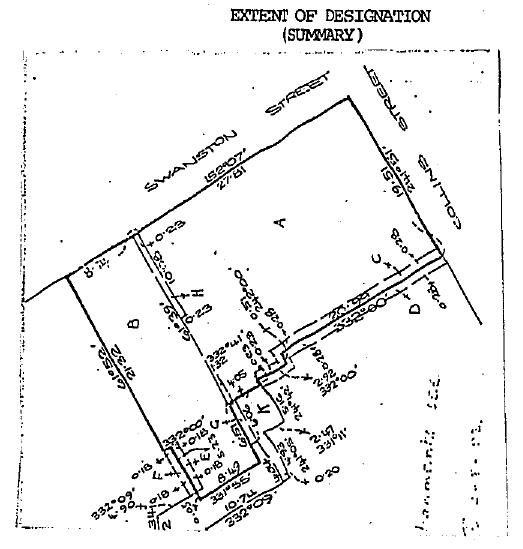 What is significant?
The Manchester Unity Building was built in 1932 by Walter Cooper Pty Ltd. It was designed by the architect Marcus R Barlow to meet the corporate needs of the Manchester Unity Group, a friendly society with 28,000 members in 1932. The twelve storey building, located prominently on the corner of Collins Street and Swanston Street, has a concrete encased steel structure and is clad with moulded terra cotta faience. The overall effect is one of a modern commercial Gothic style. The structure is crowned with a corner tower of soaring, diminishing buttresses in a style presumed to be inspired by the Chicago Tribune Building, which received worldwide publicity when built in 1927.

Within twelve months of commencement of work the Manchester Unity building was officially opened by the Premier of Victoria. By early May 1932 the sub-basement, basement and ground floors were ready for shopfitters and other finishing trades to move in. The remaining floors were added at the rate of one a week, and by late July 1932 the roof was laid and work started on the tower. Newspapers carried regular reports on the progress of the building, and a trip to the city to watch construction was a regular event for many Melbournians.

The Manchester Unity building was the first in Victoria to have escalators. These provided access to the basement and the first floor directly from the main arcade entrance at Swanston Street. It was also one of the first Victorian buildings with automatic cooling, and rubbish and postal chutes on every floor. Australia's largest diesel generator, located in the sub-basement, provided an emergency power supply. Of the original lifts, two of the three have been converted to automatic operation but the beautiful inlaid timber and panelled interiors to the lift cars have been retained.

The exterior facade is clad in biscuit coloured terra cotta faience. The faience is intricately moulded to produce continuous narrow columns and shafts rising up the facade, serving to emphasise the verticality of the building. The bulk of the building extends to 40.2metres, which was the height limit for central Melbourne at the time. Prominence is given to the corner by the tower, which soars above the main bulk. Towers were permitted to break the city's height limit as long as they did not contain occupiable rooms.

Internally there is extensive use of various Australian marbles as cladding to the walls. The ground floor lobby ceiling and cornices have high-relief depictions of Aboriginals, Australian flora and fauna as well as transport, building and primary industries. Cornice plaster panels in the corridors of all the floors carry depictions of the friendly society's role in welfare provision.

Located on the eleventh floor are the former offices and boardroom of Manchester Unity. They walls are decorated with sliced timber veneer panelling. The boardroom table was constructed in situ and is nearly six metres long. The top is finished with a rosewood veneer and rosewood inlay border, and a moulded and carved edge. Twelve monogrammed leather chairs also survive. It is likely that the table and chairs were also designed by Marcus Barlow's office, part of the total design of the building.

How is it significant?
The Manchester Unity Building is of architectural, historical, social, aesthetic and technical significance to the State of Victoria.

Why is it significant?
The Manchester Unity Building is architecturally significant as one ofthe tallest building in Melbourne when it was completed in 1932. The architectural styling, with its soaring vertical emphasis, was a daring break from the conservative palazzo architecture of the 1920s, which was typified by large and dominant cornices. The styling was complemented by the fashionable cladding material of glazed terra cotta faience. The modern commercial Gothic style of the Manchester Unity Building stands in contrast to the ecclesiastical Gothic of nearby St Paul's Cathedral. The building is architecturally significant as the greatest achievement of noted architect Marcus Barlow.

The Manchester Unity Building is historically significant as the initiative that convinced Melbournians that the building slump caused by the Depression was almost over, such was the grand scale of the project and the speed at which building progressed. The fast building programme was controlled by the use of a works progress schedule, an innovation to the local building industry at the time.

The Manchester Unity Building is socially significant as a landmark in both positioning and scale. It challenges, for scale and presence, the Melbourne Town Hall located opposite.

The Manchester Unity Building is aesthetically significant for its intact interiors. The intricate plaster panel cornices and ceilings, the use of marble, and the inlays to the lift cars and sliced timber veneers in the boardroom all display a high standard of artistic workmanship that is without par for a building of this period. The boardroom table and chairs are historically and aesthetically significant. The survival of a boardroom table of this scale and grandeur from this period, complete with chairs, is unusual in Victoria. They formed part of the total design for the building.