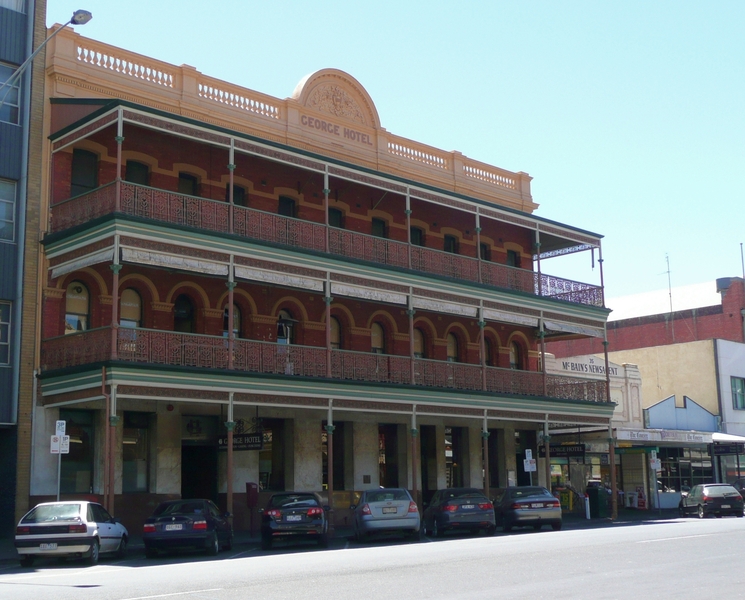 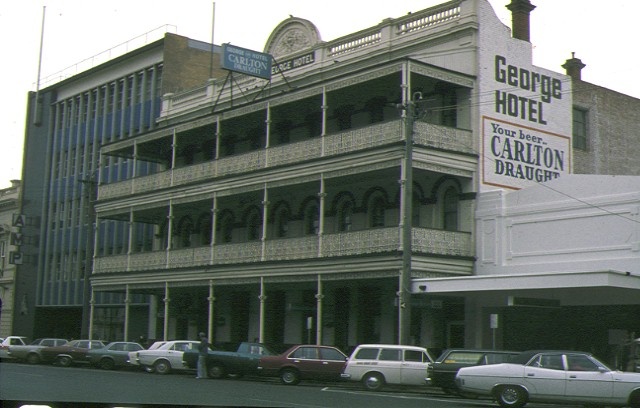 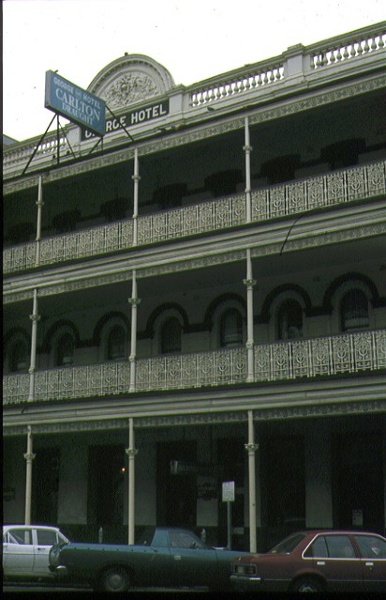 What is significant?
The first hotel on this site, the George Inn, was built in 1853, and was among the earliest hotels in Ballarat. It was an imposing two storey building located in a key position on Camp Hill, and was a landmark of early Ballarat. It was patronised by the fashionable members of the mining community and was witness to many of the events that shaped early Ballarat, particularly the Eureka uprising of 1854, when it was the rendezvous point for the civil and military authorities. In 1902 it was replaced by the present building, designed by the Ballarat architects E & B Smith and built by J McGregor. The tender price was £8397, and the total cost including furnishings was £17,000. Although built after the boom period, its flamboyant design is akin to the styles of the late nineteenth century. It had seventy five rooms of which thirty were bedrooms. There were four bars, behind which were four sitting rooms, a reading room, complete with grand piano, which opened into the dining room by means of wide folding doors, a commercial room, a billiard room with two tables, and a grand stair hall with an elaborate timber reception desk and a fine walnut staircase. An unusual feature was the carriage way to the right hand side of the building, now closed off, which separated a suite of offices, the George Chambers, on one side from the bars and lounge rooms on the other. The stables at the rear were designed to accommodate both horses and motor vehicles. There were alterations in 1926 by Clegg & Morrow, mainly involving kitchen and bathroom facilities. Alterations in 1938 by L H Vernon involved the upgrade of bar facilities and their redecoration in the Art Deco style, the blocking off of the carriageway, and alterations to the facade. The interior, particularly the stair hall, was damaged by fire in 1988, but has since been restored.

The George Hotel in Lydiard Street North at Ballarat is a three storey brick building with a six bay wide cast iron double balcony verandah, which is unique to Victoria. Its cast iron is of a design common to Ballarat. Above the verandah there is a balustraded parapet surmounted by a decorative semi-circular tympanum above the name plate. The brick facade is treated in an elegant classical manner, with arched windows on the first floor and segmentally arched windows on the second floor. The ground floor has marble facings, white above sill height and red below; this was unusual at the time, as most hotel facades were then tiled. The thresholds have the words ‘George Hotel’ inlaid in white marble.

How is it significant?
The George Hotel in Ballarat is of architectural and historical significance to the State of Victoria.

Why is it significant?
The George Hotel at Ballarat has architectural significance primarily for its three level cast iron verandah, which is unique in Victoria. The hotel and its verandah form an extremely important streetscape element in this part of Lydiard Street, which is the best surviving example in the state of the pre-boom period of provincial city development. The verandah, along with the verandahs of the Old Colonists’ Hall and Alexandria Tea Rooms opposite, imparts a unique character to the streetscape.

The George Hotel at Ballarat has historical significance because of its association with its predecessor on the same site. The original George Hotel was one of the first such establishments in Ballarat, played a role in the town’s early mining history, and a significant role in the events that culminated in the Eureka Rebellion.
[Online Data Upgrade Project 2004]