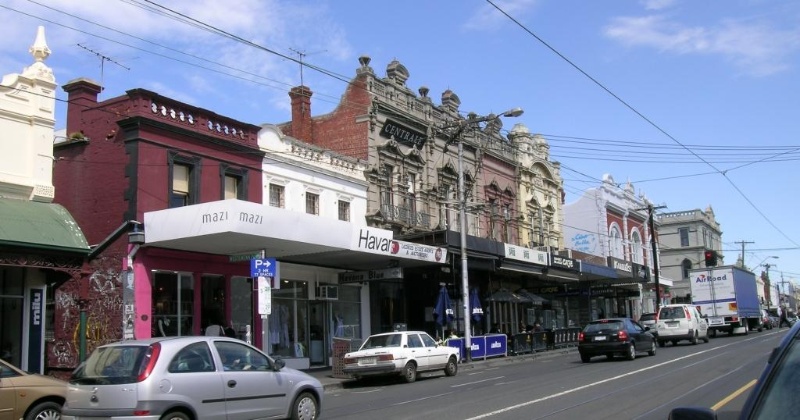 What is significant?
Bridge Road precinct, Richmond is significant. It is a predominantly 19th and early 20th century commercial strip and Richmond's civic hub, with a contribution from interwar buildings, which has the following key characteristics.

- Typically living accommodation over or at the rear of ground level shops;
- Typically configured as continuous rows with no front or side boundary setbacks, typically set out on a 6m wide module;

- Hotels from the nineteenth and early to mid twentieth centuries, typically on corner sites;
- Inter-war buildings, some with original or early shop fronts;
- Architecturally significant buildings that express a range of key commercial development periods in the City;
- Tramlines and any associated tram shed sites;
- Traditional street elements such as bluestone pitched crossings, kerbs, and gutters, cast-iron grates, and asphalt paved footpaths; and
- The Richmond City Hall complex, with associated former Court House and Police Station; and
- Industrial landmarks such as the former Finchams Organ Factory.

How is it significant?
The Bridge Road precinct is aesthetically and historically significant to the locality of Richmond and the City of Yarra.

Why is it significant?
The precinct is historically significant (Criterion A):

- As one Richmond's principal thoroughfares, which leads to the first bridge to connect Richmond to Hawthorn, retaining many early Victorian-era shops.
- As an important commercial precinct in Richmond, particularly expressive of the 19th and early 20th centuries and incorporating Richmond's civic hub.
- For the tramlines as the functional descendants of those originally installed in 1885.
- For the contribution of Individually Significant or Contributory buildings that express a range of key development periods in the street and the City.

The precinct is architecturally and aesthetically significant (Criteria D & E):

- For the architectural continuity and high integrity of upper level facades to their construction date.
- For some well-preserved early shopfronts from the Victorian to the inter-war period.
- For the good and distinctive examples of Victorian and Edwardian-era architectural styles and ornamentation as evocative of the street's premier role in Richmond.
- For the examples of shop buildings from the 1920s and 1930s that relate well to the dominant Victorian-era and Edwardian-era scale and character.
- For traditional street elements such as bluestone kerbs, pitched crossings, gutters and asphalt footpaths.
- For the landmark quality of the Richmond Town Hall, with associated Court House and Police Station.