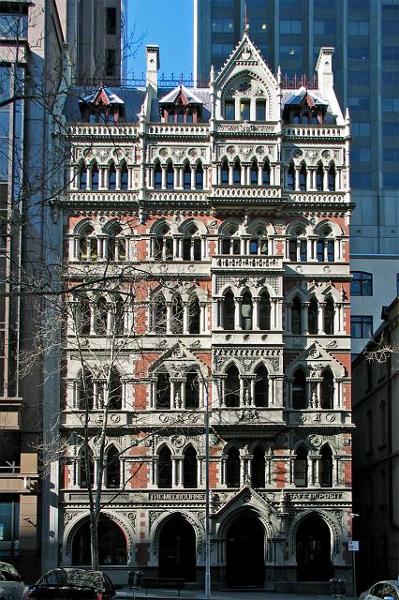 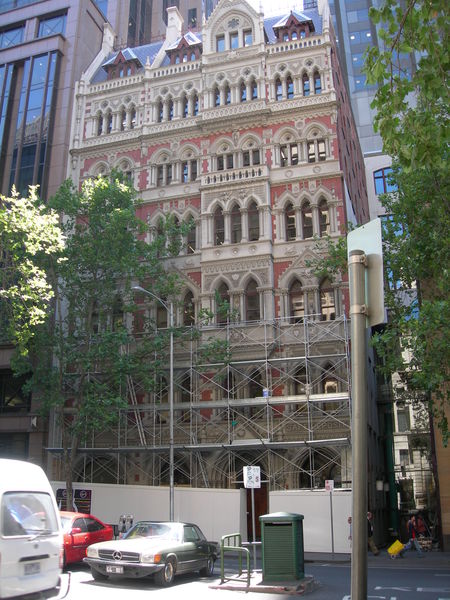 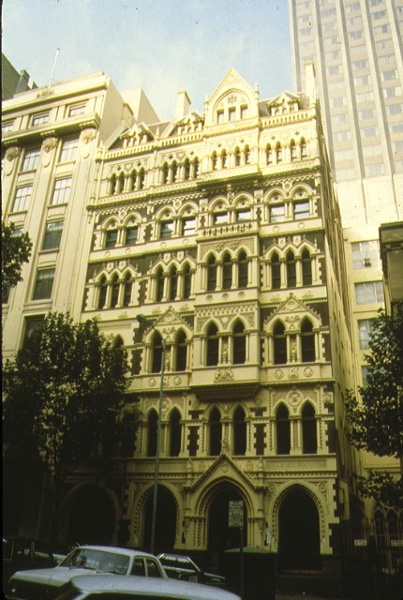 What is significant?
The former Safe Deposit Building was designed by prominent architect William Pitt and built in 1890 for the Stock Exchange of Melbourne Co. Ltd. and occupied by the Melbourne Safe Deposits Co. Ltd. Notorious land boomer and speculator Benhamin J Fink was Chairman of the Stock Exchange, and he persuaded the Stock Exchange committee to buy the land, owned by himself, where the new buildings were to be built. The deal yielded Fink a personal profit of 55,000 pounds. The seven storey building was executed with a highly ornate and detailed facade in the Gothic revival style. It is physically linked, behind the adjacent so-called Gothic Bank, with the Stock Exchange Building in Collins Street, also designed by William Pitt in 1890. Both buildings, with slight differences, were completed in the same architectural style and for the same owner. The choice of Gothic was an explicit reference to the mercantile Gothic buildings of Venice, and alluded to the prosperity and success of that city. The addition of an extra bay to the north in 1924 upset the symmetry of the original design but was executed in a highly sympathetic and unifying manner.

How is it significant?
The former Safe Deposit Building is of architectural and historical significance to the State of Victoria.

Why is it significant?
The former Safe Deposit Building is architecturally significant as an integral part of architect William Pitt’s design for the Stock Exchange in Collins Street. The architecture of the facade is a more modest essay in the same Gothic revival style as the facade of the Stock Exchange, but it is executed in red brick and cement rather than sandstone and marble. The elaborate composition of fine decorative Gothic mouldings contrasts with the dark, structural brickwork and exudes the affluence of the boom period. It stands in contrast to the adjacent so-called Gothic Bank designed by William Wardell a few years before in 1883. The former Safe Deposit Building is significant as a major work of the prolific and successful boom period architect William Pitt. Pitt was a master of the Gothic revival style and his work epitomised the boom style in Melbourne.

The former Safe Deposit Building is historically significant as the first safe deposit operation in Australia. The basement vaults are largely intact. At the time of construction the Safe Deposit Building was considered the strongest and most secure building in Australia. The building is also historically significant for its associations with the notorious land boom speculator, Benhamin J Fink, Chairman of the Stock Exchange of Melbourne Company Ltd.
Show more
Show less
All information on this page is maintained by Heritage Victoria. Click below for their website and contact details.