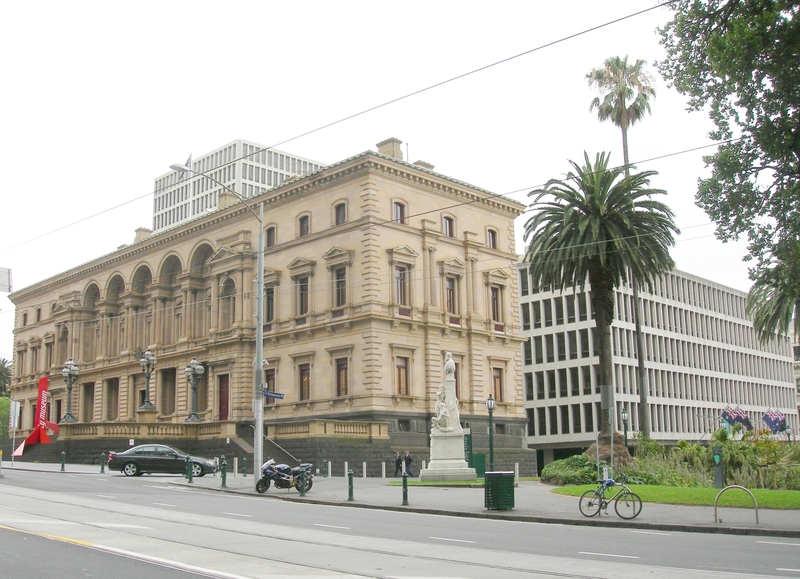 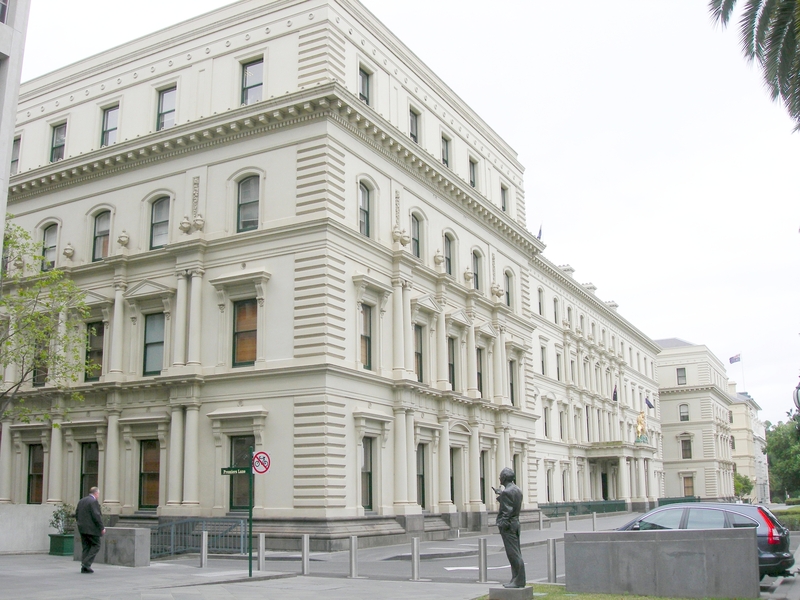 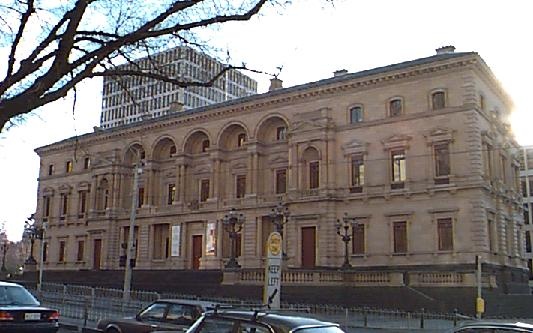 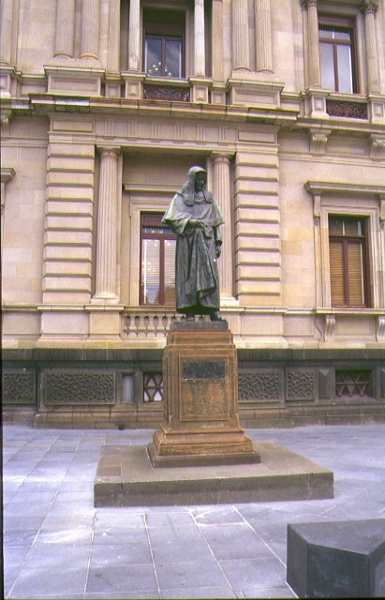 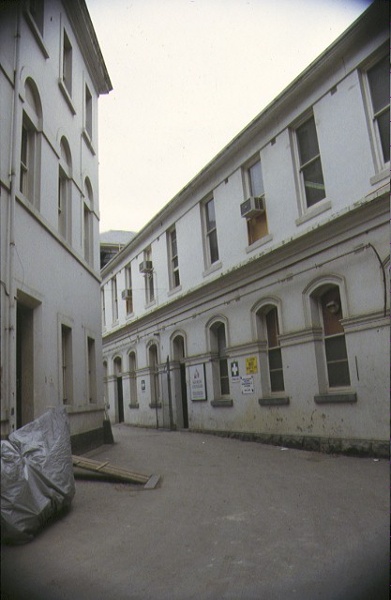 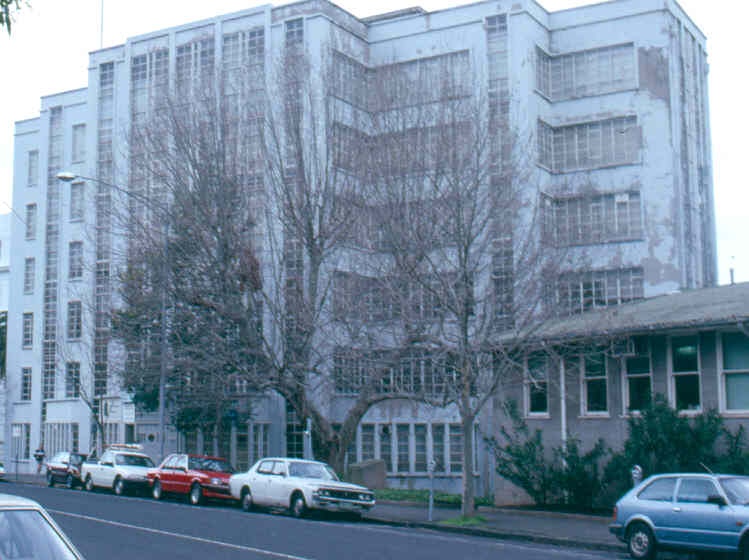 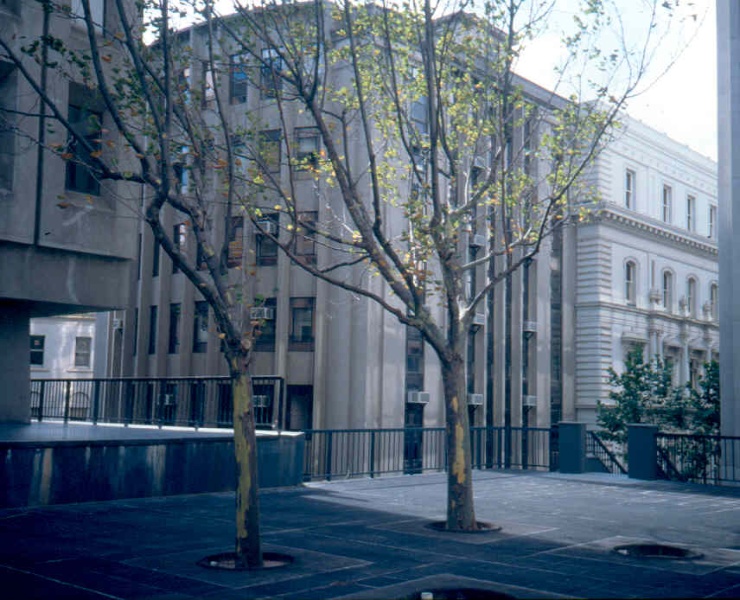 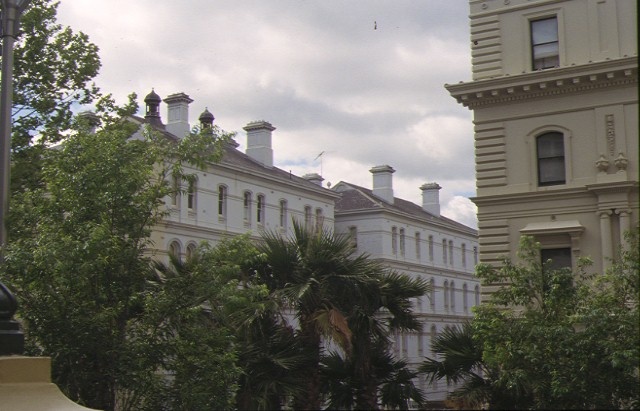 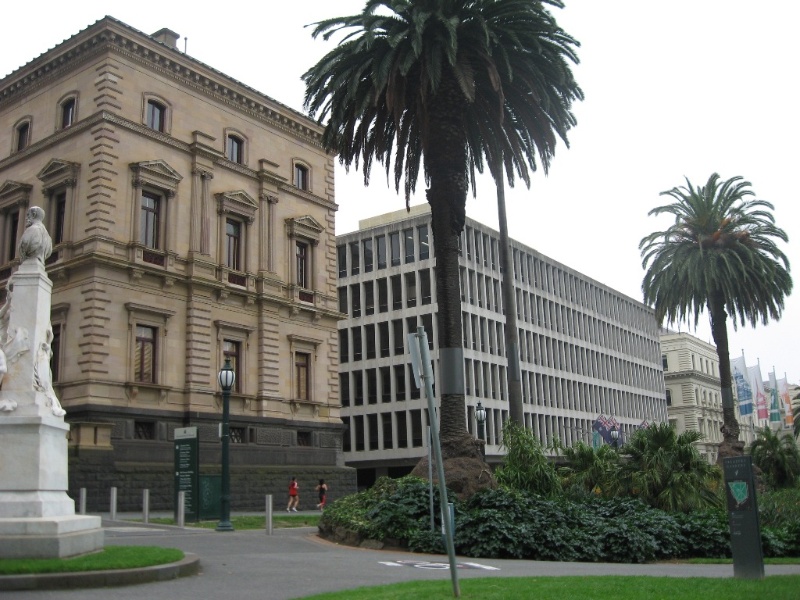 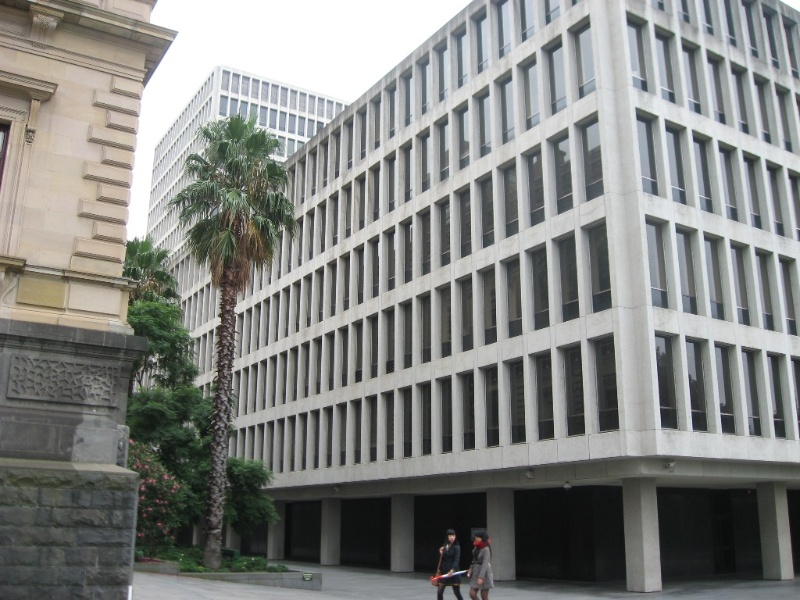 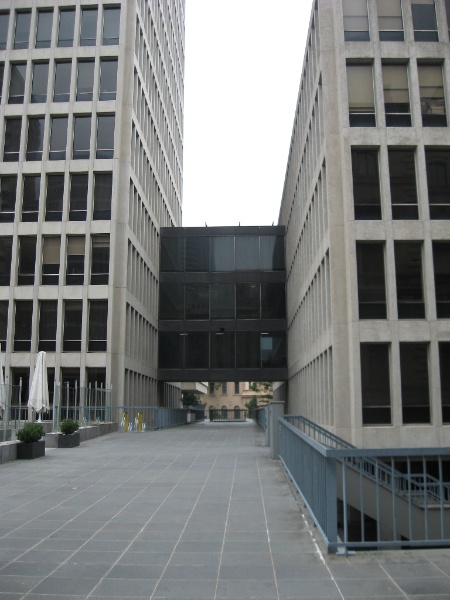 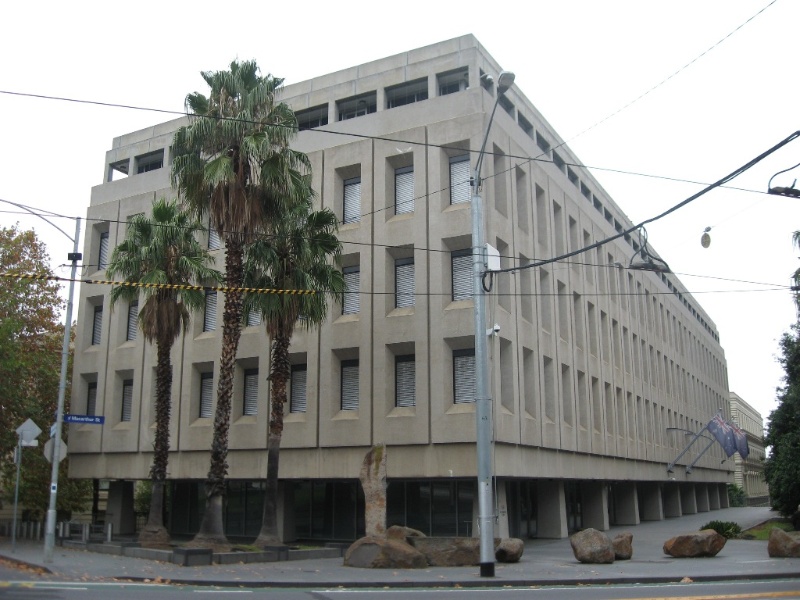 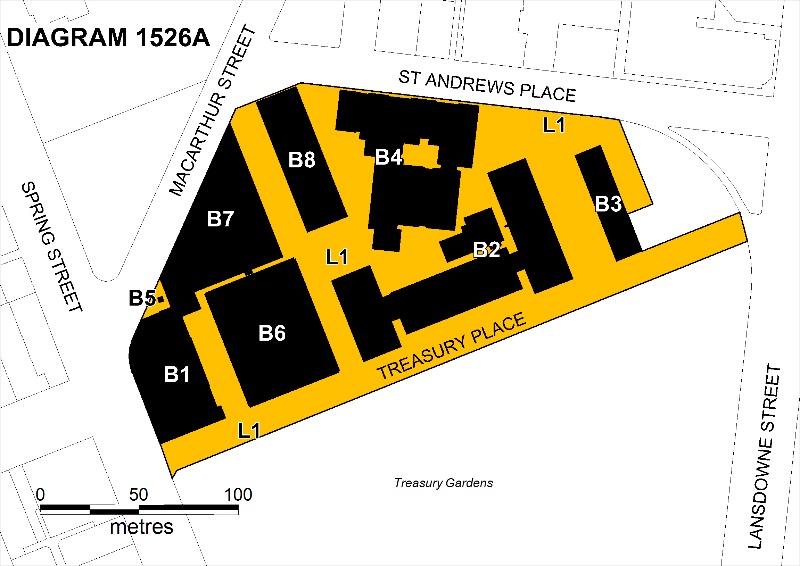 The Treasury Reserve containing Victorian government offices is a triangle of land on the eastern fringe of central Melbourne, bounded by Treasury Place, Spring Street, Macarthur Street, St Andrews Place and Lansdowne Street. Construction began on the site in the 1850s and continued into the 1960s.

The government offices were originally located around William Street and Flagstaff Hill, which was the point of communication from the Port of Melbourne. The site of Parliament House at the eastern end of Bourke Street (first stage completed in 1856) determined the new location of the government offices and an overall plan for buildings on the Reserve was discussed as early as 1859.

The first building in the precinct, the Government Printer's Office (1856-58), was designed by architect J J Clark and various alterations and additions were subsequently made to this building. J J Clark also designed the Renaissance Revival palazzo-style Treasury Building (1858-1862) at the western end of the precinct, facing Collins Street, which included a gold office and vaults in the basement. On completion it was the leading administration building in Melbourne, the tenants being the Governor of Victoria, the Chief Secretary, the Treasurer, and the Registrar-General and Registrar of the Supreme Court. In 1859 foundations were laid for a third building, the New Treasury Building, in the precinct at No 2 Treasury Place, but this was not completed until 1876. A classical style was adopted by the architect Michael Egan, consistent with the existing government buildings, and this building accommodated the treasurer and other government departments, including the Public Works Department. Major remodelling included the addition of a third floor to the east and west wings in 1933 to designs by Oakley and Parkes, and the addition of the Western Annexe to the north, by Percy Everett of the PWD in 1949 (demolished 1997). No 2A Treasury Place was built in 1873-75 to accommodate the Central Plan Office.

In 1906-07 offices, designed by George Watson, were constructed for the Department of Agriculture at 3 Treasury Place to the east of the site. This brought together the most important infrastructure departments with Premiers and Treasury to establish the Reserve as a seat of government administration prior to World War 1. A Percy Everett-designed extension to the building in 1948, which included a cinema, was demolished in 1998.

In 1937 a statue of Justice George Higinbotham was unveiled. The bronze statue was designed by Paul Montford and placed to the north of the Old Treasury Building. Higinbotham was editor of the Argus, Attorney General and then Chief Justice for the State of Victoria.

An architectural competition was held in 1962 for an office tower to be placed behind the Old Treasury Building and on an axis with Collins Street. Despite not conforming to the brief, Barry Patten of Yuncken Freeman won the competition with a design for two buildings; a low scale building directly behind the Old Treasury Building to house government ministers and the Premier, and a taller tower to the north of matching design. A third building, to house the State Chemical Laboratories, was constructed to the east of the tower at the same time in the late 1960s, and all were placed within an elevated plaza, with a basement containing the State Film Centre, an auditorium, car parking and mechanical services located below. Completed by 1970, the buildings were designed in a modern and severe style, with proportions, window openings and materials used reflecting those of surrounding buildings in the precinct. Innovative load bearing precast panelling was used in construction.

In 1964 the Geological Museum (1909) and the Mines Laboratory, which had been set up in 1909 in the remodelled engine house (1888), were demolished for construction of the State Chemical Laboratories. These laboratories were relocated to Werribee in 1995. The trend in the 1980s for the dispersal of government departments to office buildings in the city was reversed in the following decades following restoration of the Old Treasury Building in 1992-95 and the subsequent refurbishment or restoration of other buildings in the Treasury Precinct. This included installation of new services and the demolition of some later accretions.

How is it significant?
The Treasury Reserve Precinct is of historical, architectural and scientific (technical) significance to the State of Victoria.

Why is it significant?
The Treasury Reserve Precinct is of historical significance as the centre of Victorian government administration for 150 years. The buildings constructed prior to the dispersal of government departments, including the Government Printer's Office, Old and New Treasury Building and Department of Agriculture Building, together with the three buildings constructed in the late 1960s, illustrate the workings of government over this extensive period. The Former Printer's Office served the publication requirements of the government for over 100 years and represents the first phase of the government's establishment in the precinct. The Old Treasury Building was the leading administrative building of the government, has associations with the gold rush and has always been the city office for the Governor of Victoria. The New Treasury Building (No 2 Treasury Place) has associations with many important figures and housed the Premier and Cabinet until replaced by new State Government Offices, which are themselves a clear expression of political power in Victoria in the 1960s. The statue of Justice George Higinbotham is of historical significance as a commemoration of this important Victorian figure.

The Treasury Reserve Precinct is of architectural significance for the buildings contained within the precinct. This includes the Government Printer's Office (J J Clark, 1856-58), Old Treasury Building (J J Clark, 1858-62), New Treasury Building (M Egan, 1859-76), Department of Agriculture Building (G Watson, 1906-07) and the State Government Offices and former State Laboratories (Yuncken Freeman,1967-68). The latter are an important collection of civic buildings which are designed as an ensemble within a plaza in a severe, yet sympathetic style.

The former Central Plan Office, former Printer's Office and the Old Treasury Building are of scientific (technical) significance as a demonstration of early fireproofing methods. In particular, the floor construction of the Old Treasury Building demonstrates an early form of fire protection and the former Central Plan Office contains fireproof shutters. The three 1960s buildings show an important and innovative use of load bearing precast panels in their construction.