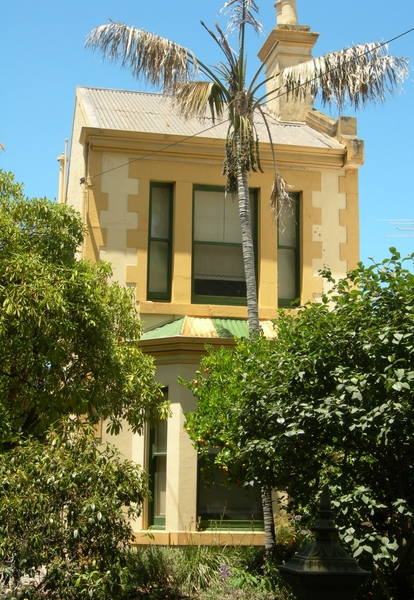 The residence at 896 Swanston Street is a freestanding townhouse erected c.1868 by John W Brown. Brown was a stonemason and originally conducted his business from the premises, which accounts for the large site. The Brown family owned and occupied the premises until 1925. The two storey rendered brick house is set well back from the street and entered from the side. The main reception room has a bay window.

The residence at 896 Swanston Street is of architectural and historical significance to the State of Victoria.

A freestanding house in the conservative classical style, the canted bay window and side entrance are notable exterior elements. The interior features fine marble fireplaces and cedar fittings. The house is complemented by a large, well-established garden. The excellence of the house's architecture reflected its location near the new University, the burgeoning retail strip of Lygon Street, and the already substantial character of Drummond Street, where Judge Redmond Barry had built his residence in 1855.

The residenceat 896 Swanston Street is of historical significance as an example of very early development in this part of Carlton. The land north of Grattan Street extending to Palmerston Street was subdivided in the 1860s, so this house was one of the first built in the area, its comparatively large block and freestanding, almost semi-rural character reflecting the early stages of development. It is a very well designed and built example of an owner-built house, a form of development that was common in the early decades of Melbourne's establishment.