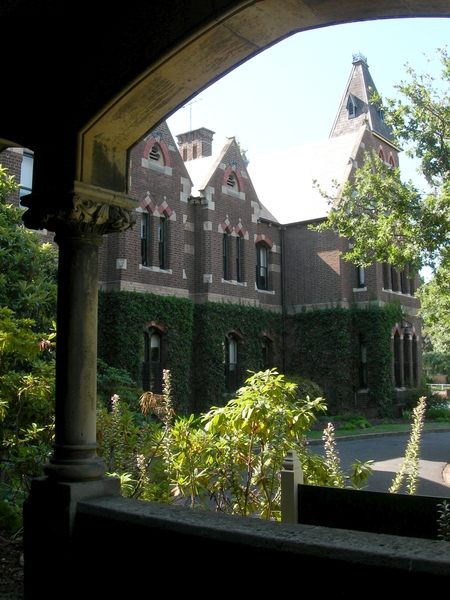 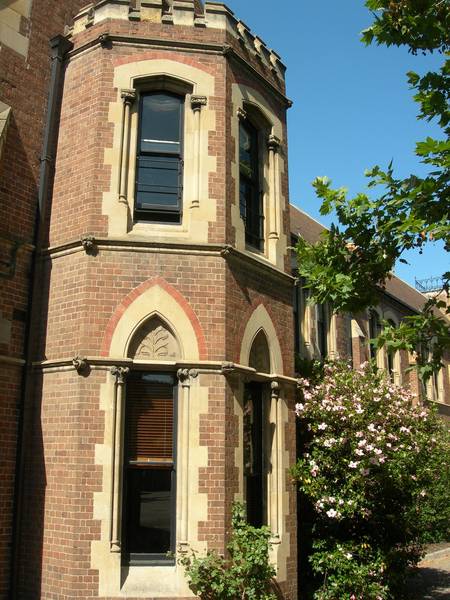 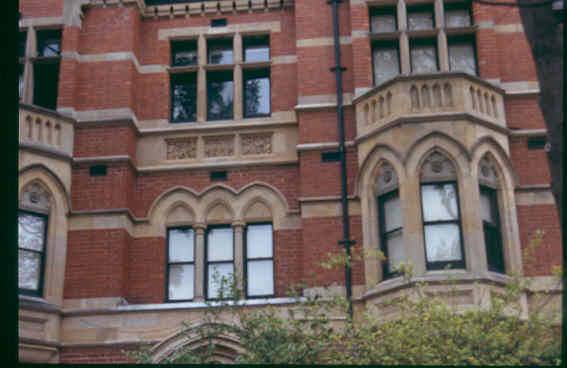 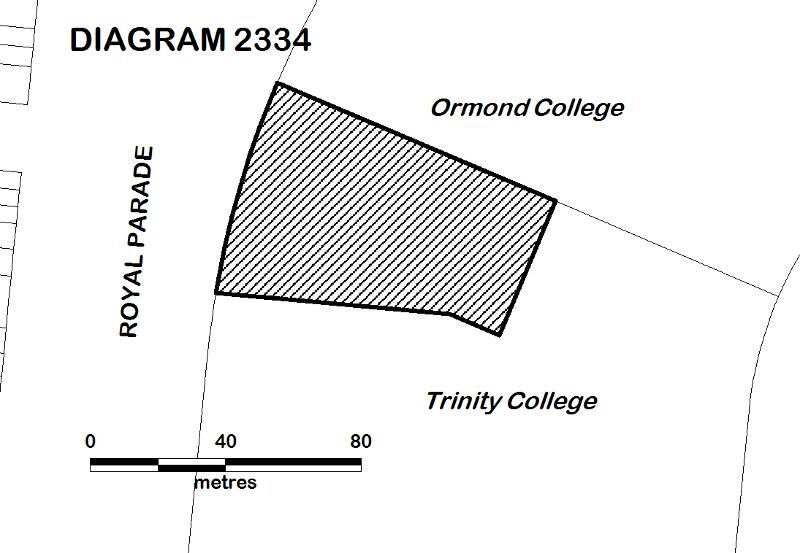 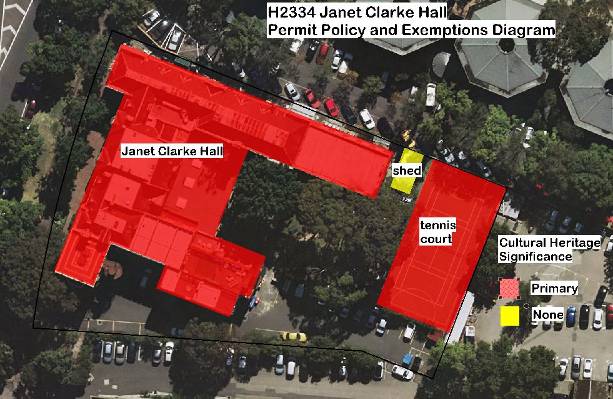 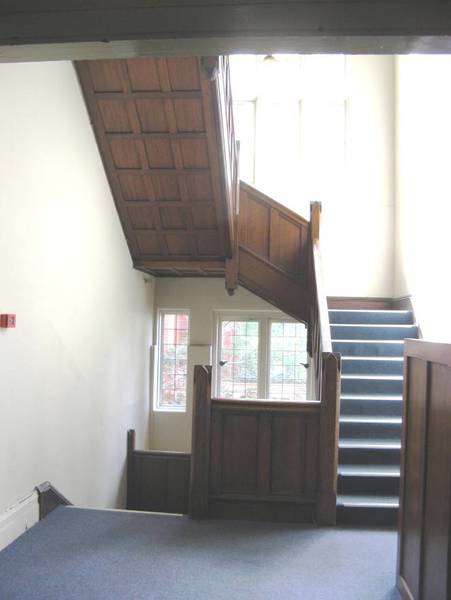 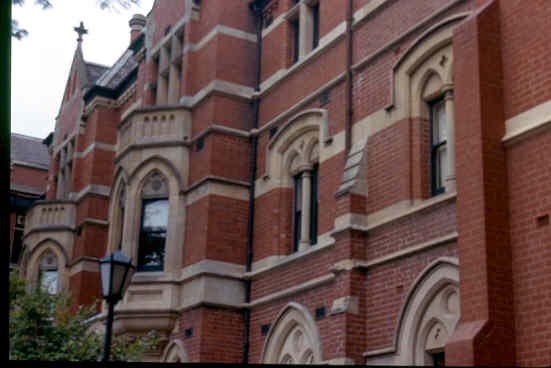 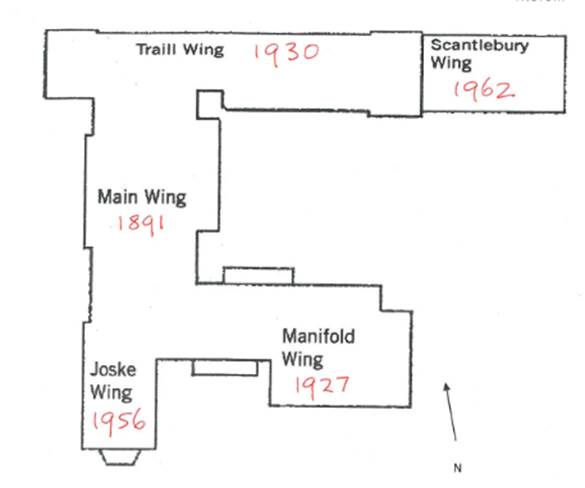 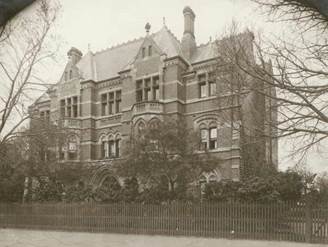 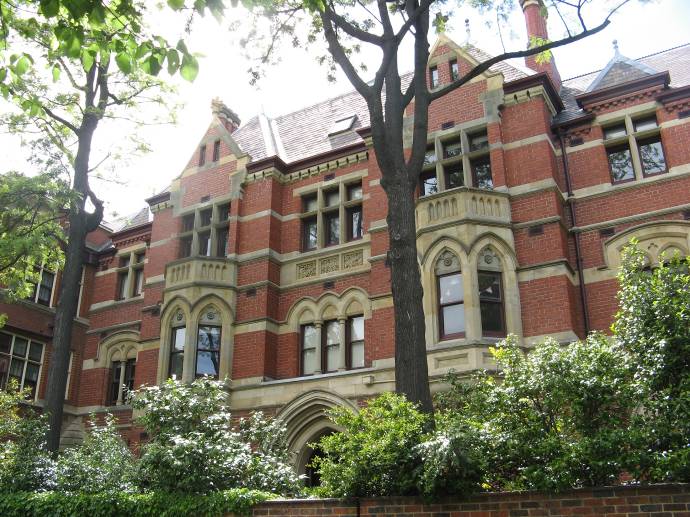 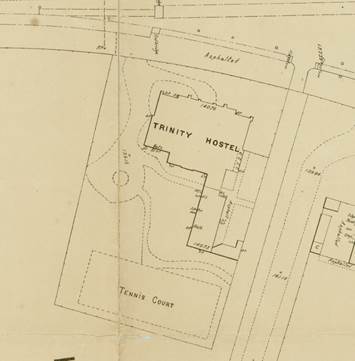 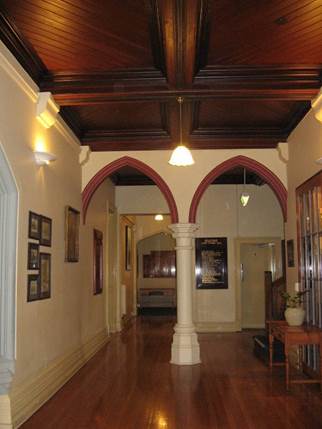 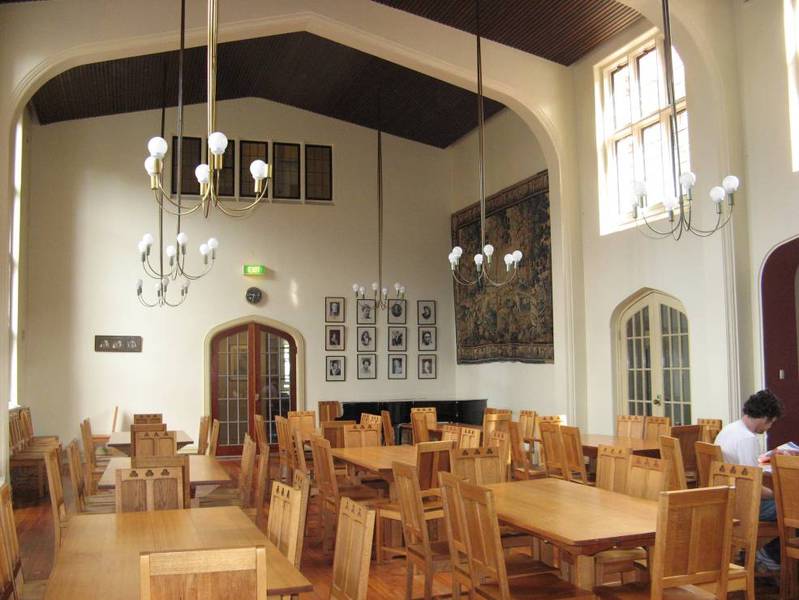 Janet Clarke Hall, a residential College of the University of Melbourne, including the 1891 main wing fronting Royal Parade, the 1927 Manifold Wing, the 1929 Traill Wing, the 1956 Joske Wing, the 1962 Scantlebury Wing and the tennis court at the rear.

The University of Melbourne was founded in 1853 but accepted female students only from 1881. University residential colleges were established to the north of the university, with the first, Trinity College, opening in 1872. Trinity accepted women as non-resident members from 1883, but its first Principal, Alexander Leeper, became convinced of the need for a residential women's college at the university. In 1886 he submitted a proposal for a women's hostel on land in the north-west corner of the Trinity College grounds. The construction of the first building on the site, known as Trinity College Hostel (later the main wing of Janet Clarke Hall), was made possible by donations of £5,000 from Janet Lady Clarke, the wife of Sir William Clarke and a generous philanthropist, and of £2,000 from Sir Matthew Davies. The design of the architect Charles D'Ebro was chosen for the Hostel, it was built by Thomas Corley, and was opened by the Governor Lord Hopetoun on 15 April 1891. The tennis court, which provided recreation for the students, was built before 1897. The name of the Hostel was changed in 1921 to Janet Clarke Hall, to acknowledge the role played by Janet Lady Clarke in its establishment. In 1927 a bequest from the pastoralist William Manifold made possible the construction of a new wing to the south-east, designed by the architects Blackett & Foster and built by Thompson & Chalmers. The Traill Wing to the north, named after the former student and major donor Elsie Traill and designed by the architectural firm A & K Henderson, was added in 1930. Another wing, designed by W Forsyth and built in 1954, was named after Enid Joske, a former student and the College Principal for twenty-five years. In 1961 Janet Clarke Hall broke its link with Trinity College and declared itself independent. The last major addition to the Hall was the Lilian Scantlebury Wing, named after the Hall Committee Chair and designed by Forsyth & Richardson, which was added at the end of the Traill Wing in 1962.

Janet Clarke Hall is a three storey red brick building with contrasting sandstone and stucco dressings, composed of five wings constructed over a period of approximately 70 years. These wings enclose on three sides a central courtyard planted with lawn and trees. The 1891 wing facing Royal Parade is the central portion of a never completed larger design and is a flamboyant interpretation of the Gothic Revival style. The Manifold Wing forming the southern side of the courtyard is a Collegiate Gothic style building with a castellated parapet. The Joske Wing links the Manifold wing with the original building. The Traill Wing to the north draws its inspiration from the manifold Wing, but the adjoining Scantlebury Wing is uncompromisingly modern in style, while sympathetic in its materials, height, scale and general appearance. Some early furnishings are retained in the building.

Janet Clarke Hall is of architectural and historical significance to the State of Victoria. It satisfies the following criterion for inclusion in the Victorian Heritage Register:

Janet Clarke Hall is significant at the State level for the following reasons:

Janet Clarke Hall is historically significant as the first university college in Victoria, and in Australia, built solely for female students. It has provided residential, recreational and tutorial assistance for female students at the University of Melbourne since 1891. It is significant for its continuous use as a university college for over a century and for its role in the development of women's tertiary education in Victoria. (Criterion A)

Janet Clarke Hall was unique in its foundation in Australia and was ground breaking in its establishment, as similar women's colleges were not established in other Australian states until the early mid-twentieth century, and in Victoria until 1918. (Criterion B)

Janet Clarke Hall is significant for its association with several prominent Victorians. These include its founder Dr Alexander Leeper, the first Warden of Trinity College, and Janet Lady Clarke, a supporter of many philanthropic, cultural and educational movements in nineteenth century Victoria, who made possible the construction of the main wing, and after whom the College is named. Janet Clarke Hall is also significant for its association with some of Melbourne's major architects and architectural firms, including Charles D'Ebro, William Blackett and A & K Henderson. (Criterion H)

Janet Clarke Hall is also significant for the following reasons, but not at the State level: