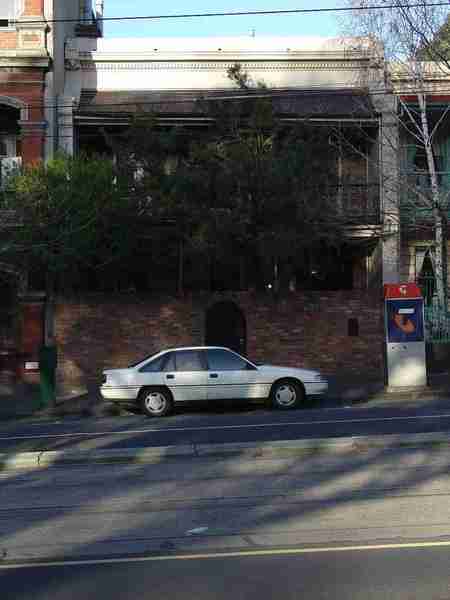 The World Heritage Environs Area Precinct generally borders and is adjacent to the Royal Exhibition Building (REB) and Carlton Gardens, Carlton. It includes land and properties in the suburbs of Carlton and Fitzroy, the northern area of Melbourne's Central Business District, and East Melbourne.

The western and northern areas of the precinct are located in Carlton where the subdivision and sale of land for private development commenced in the 1850s. Carlton Gardens, which were first envisaged by Charles Joseph La Trobe as early as 1839, remained largely undeveloped until about 1855, when improvements were made to a design by Edward La Trobe Bateman. The REB was constructed in the gardens in 1879-1880, to house the international exhibition of 1880. The gardens were selected because they provided the desired park-like setting for the building, central location, and at 64 acres (26 hectares), were adequate in size. In return for the use of the gardens for exhibition purposes, the Government undertook to substantially upgrade the perimeter and appearance of the gardens, post-exhibition, thereby enhancing their attractiveness within the local Carlton and Fitzroy contexts.

Land surrounding parks and gardens in Carlton, including Carlton Gardens, attracted higher quality residential development in the nineteenth century. Rathdowne Street also attracted some institutional uses in the later nineteenth and early twentieth centuries, including churches, schools and hospital uses. By the 1890s, the majority of Carlton exhibited a largely tight and orderly subdivision pattern including a network of small laneways. In the precinct, this subdivision pattern is still particularly evident along Carlton Street. In Rathdowne Street, infill development began encroaching at the south end in the 1970s.

The eastern area of the precinct is located in Fitzroy, which was originally known as 'Newtown' and was one of the first areas of Melbourne to be developed outside the original town reserve. Subdivision of Fitzroy was somewhat haphazard due to the first allotments of the late 1830s being large (between 12 and 28 acres) and subsequently subdivided without restriction. Victoria Parade and Nicholson Street were Government roads of this era, which helped to provide a framework for a more regular pattern of subdivision in adjacent areas. Private roads, including Gertrude Street were also created, some of which had inconsistent widths and alignments. Gertrude Street was one of the first non-Government streets to be laid out by landowners in Fitzroy and became one of the most important non-Government streets in South Fitzroy, mainly because its original line and length were extended by a number of successive land owners and subdividers in contrast with the disparate pattern of subdivision and street layout which developed in other allotments in South Fitzroy. The ad hoc subdivision and increasingly smaller allotments also resulted in the construction of sub-standard housing in Fitzroy, eventually remedied by the Melbourne Building Act of 1849 which required the use of better quality building materials and practices. Royal Terrace in Nicholson Street is an outstanding example of terrace housing from the 1850s, and is the largest early terrace building surviving in Melbourne. During the 1860s and 1870s development was consolidated, with more substantial premises replacing earlier structures, including on Nicholson Street. Cable trams were introduced to Gertrude and Nicholson streets in the 1880s, facilitating the construction of the Cable Tram Engine House at the junction of the two streets. Institutional uses, such as St Vincent's Hospital (beginning in a terrace row in Victoria Parade in the 1890s) and the Convent of Mercy (founded in the 1850s) were also attracted to Nicholson Street, the former expanding over many decades to become one of inner Melbourne's largest hospital complexes, although the majority of the hospital's landholdings and facilities are not within this precinct.

The southern area of the precinct includes the Royal Society of Victoria building, which is associated with the oldest scientific and philosophical society in Victoria, established in 1855. The present two storey brick structure was erected in several stages beginning with the original Meeting Hall which was completed in 1859, to a design by the noted Melbourne architect Joseph Reed. The Royal Australasian College of Surgeons building, to the east, is located on a triangular area of land originally occupied by the Model School, built between 1854 and 1856. The school was demolished in 1933 to make way for the new college, designed by Leighton Irwin and Roy Stephenson.

Nicholson Street retains a comparatively high level of intactness and rich detailing in terms of nineteenth century form and character, including lower scale development typically located north of the St Vincent's Hospital complex. It is also characterised by a mix of two-storey with some three-storey residential development, including terraces and larger dwellings of individual significance, as well as the aforementioned institutional sites. The southern end of the street is dominated by the St Vincent's Hospital complex of buildings. The former Cable Tram Engine House (48 Nicholson Street, c. 1886, VHR H0584) is prominently located at the intersection with Gertrude Street. Royal Terrace (50-68 Nicholson Street, 1853-58, VHR H0172), Grantown House (82 Nicholson Street, c. mid-1850s) and Osborne House (40 Nicholson Street, c. 1850, VHR H1607), are significant examples of mid-nineteenth century residential development, and are also prominent buildings within the streetscape. Between Royal Terrace and Palmer Street are a number of terrace rows dating from the later nineteenth century. To the north of Palmer Street is the Convent of Mercy and Academy of Mary Immaculate chapel and school (88 Nicholson Street, c. 1850 and later, VHR H0507), which was built in stages and is another prominent property. Cairo Flats (VHR H1005), located on the corner of Hanover Street, departs from the nineteenth century character, being constructed in 1936. Between Hanover and Moor streets are a number of two-storey, brick terrace rows; a notable Victorian Italianate dwelling is located on the corner of King William Street (c. 1862, VHR H0539).

Gertrude Street, extending east from the REB site between Nicholson and Fitzroy Streets, is an important approach to the REB and Carlton Gardens and provides oblique views of the REB, particularly the drum, dome, lantern and flagpole, from the south side of the street. The Cable Tram which ran along Gertrude Street from the 1880s encouraged commercial development, and much of this survives. Gertrude Street is now a largely intact streetscape of two-storey shops and other commercial buildings, as well as terraces, from the late nineteenth and early twentieth centuries, with some modestly-scaled infill, mostly on the north side.

Victoria Parade (east of Spring Street) and Victoria Street (west of Spring Street) has an important relationship to the REB site in that it acts as the interface between the Carlton Gardens to the north and city development to the south. It is also a wide thoroughfare which, combined with its proximity to the REB site, provides considerable opportunity for views into the REB site, including axial views to the building along the treed avenues in the South Gardens. The Royal Society of Victoria building and domestic-scale caretaker's cottage (with weather station, 1-9 Victoria Street, c. 1858, VHR H0373), sited on a wedge of land bounded by Victoria, Latrobe and Exhibition streets, provide some nineteenth century character to this area of the precinct. The Royal Australasian College of Surgeons property (250-290 Spring Street, c. 1934, VHR H0870) is additionally located in this area of the precinct. Large and prominent contemporary towers, including office and residential development, also address Victoria Street, at the corners of Nicholson, Spring and Latrobe streets.

How is it significant

The World Heritage Environs Area Precinct is of historical, social architectural and aesthetic significance and reflects the area of greater sensitivity within the buffer zone surrounding the World Heritage listed Royal Exhibition Building and Carlton Gardens.

The World Heritage Environs Area Precinct is of historical and social significance for its association with the World Heritage listed Royal Exhibition Building and Carlton Gardens. The latter is the most complete nineteenth century international exhibition site in the world, and the main extant international survivor of a Palace of Industry and its setting. The Carlton Gardens, within Carlton, was selected as the site for the construction of the Exhibition Building in 1879-1880 and subsequent hosting of the 1880 and 1888 international exhibitions, due to its park-like setting, central location and size (64 acres/26 hectares). The subsequent upgrading of the gardens further augmented their attractiveness which, together with the prominence and visibility of the Exhibition Building, helped enhance the status of this area within the local Carlton and Fitzroy contexts.

The precinct is also of historical and social significance for incorporating important and intact areas of residential, commercial and institutional development within the early Melbourne suburbs of Carlton and Fitzroy, and institutional development in the northern area of Melbourne's Central Business District. These areas are significant to the respective municipalities of Melbourne and Yarra for demonstrating aspects of local historical development, and for contributing to the historical character of the municipalities. The areas also provide an immediate setting and context of significant heritage character for the REB and Carlton Gardens site, including properties which directly address the site and can be seen from the site; and significant development which preceded, was broadly contemporary with or followed the 1879-1880 construction and development of the REB.

The precinct is of architectural and aesthetic significance. It retains substantially intact nineteenth century streetscapes, particularly on Nicholson Street (north of Gertrude Street), the south side of Gertrude Street, Carlton Street, and Rathdowne Street north of Pelham Street. The streetscapes display a comparatively high proportion of original nineteenth form and fabric, including substantial areas of two-storey, with some three-storey residential and commercial development. The streetscapes also interspersed with prominent institutional properties of the nineteenth and early twentieth centuries. Materials and architectural elements include face brick, bluestone and rendered masonry construction materials; pitched and hipped iron and slate-clad roofs; chimneys; prominent parapets and pediments; post-supported verandahs, many with elaborate iron lacework or timber detailing; a high proportion of iron palisade fences; and typically zero or shallow front setbacks with gardens. Public infrastructure includes some bluestone pitched road and lane surfaces, and kerbs. Plane trees are common street plantings. The precinct additionally exhibits a typically fine grain pattern of urban development, generally emphasised by the regularity of the terrace row subdivisions, narrow allotments and street grid, with many streets running at right angles to the REB site.

A number of key heritage buildings from the nineteenth and early twentieth centuries are located in the precinct, some of which are landmarks in their own right but which also have a strong visual relationship or connection with the REB. These buildings, most of which are included in the Victorian Heritage Register, include Royal Terrace, the Cable Tram Engine House, Convent of Mercy/Academy of Mary Immaculate complex, Grantown House and Osborne House on Nicholson Street; the Sacred Heart Church complex including Presbytery, former Presbyterian Manse, Carlton Gardens Primary School, and former St Nicholas Hospital nurses' home on Rathdowne Street; and the Royal Society building on Victoria Street.

The precinct provides for significant views to the REB and Carlton Gardens site including direct views to the building, dome and garden setting from bordering/abutting streets, depending on where the viewer is standing. It also provides some proximate views and vistas to the REB dome from streets and minor lanes to the east and west of the site (including Gertrude Street and Marion Lane in Fitzroy and Queensberry Street in Carlton); the north ends of Spring and Exhibition streets; Nicholson Street near the junction with Victoria Parade; the east end of Latrobe Street; and from Victoria Parade immediately east of the junction with Nicholson Street. Views out of the REB site into the precinct also reinforce the understanding and appreciation of the original nineteenth century context and significant setting of the REB.