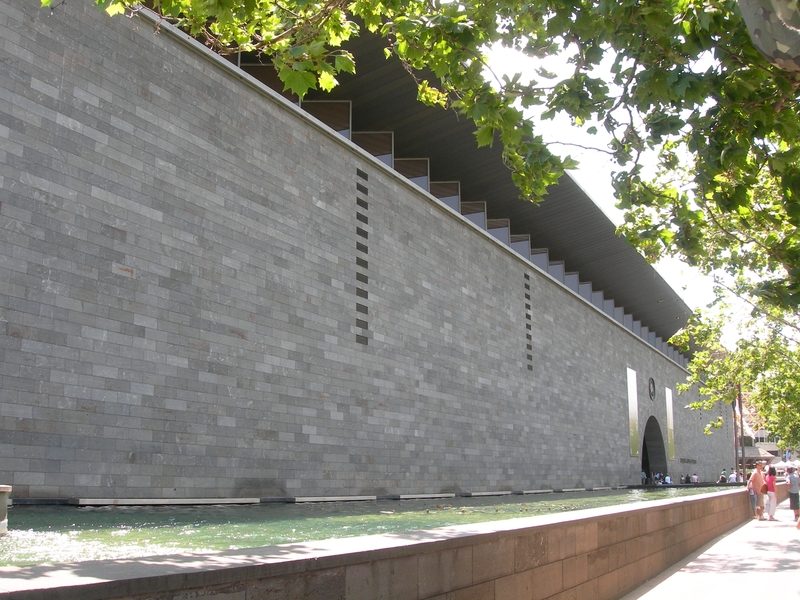 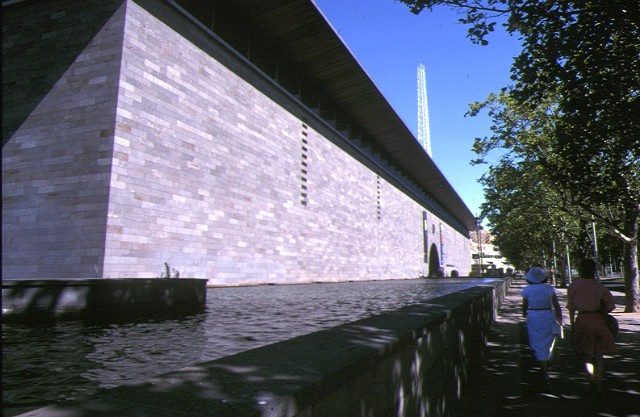 What is significant?
The National Gallery of Victoria was opened in 1968 as the first stage of the Victorian Arts Centre. Designed by noted Melbourne architect Roy Grounds, this building created great controversy both before and after construction, and caused the split in 1962 of the important and influential partnership Grounds had with Robin Boyd and Frederick Romberg.

The National Gallery was originally established in the Public Library in Swanston Street in 1861. Calls for a new and separate gallery building began after the generous Felton Bequest in 1905 enabled the acquisition of a large collection of art, however this was not fulfilled for another sixty years. In 1943 the State Government proposed that a new art gallery be constructed on crown land just south of the Yarra River on a site known as Wirth's Park, occupied at the time by a number of entertainment facilities. Proclamation of the site was delayed until 1957, after Henry Bolte was elected Premier, and construction on the site finally commenced in 1962. A competition was not held for the design and in 1959 Grounds, Romberg and Boyd were appointed architects. In awarding this commission, emphasis was placed on Grounds thirty years of experience and he subsequently became responsible for the job. He then devoted much of his time, from the 1960s to the 1980s, to this building complex. The master plan produced by Grounds, placed the Gallery at the southern end of the St Kilda Road site, with the northern end reserved for the future construction of a theatre and concert hall complex.

The Director of the Gallery at the time, Eric Westbrook, produced a brief outlining the aims of a new Gallery building and, together with Grounds, undertook a three month tour of Europe and America to view international gallery designs. Grounds had already gained a reputation in Victoria for his highly innovative work, playing a key role in the early 1930s in bringing the Modern Movement to Australia. His fascination with geometry was evident in his work from the early 1950s and can be clearly seen in his gallery design.

The large palazzo-like gallery building is rectangular in form with three internal courtyards providing light and external views to surrounding galleries. The bluestone clad, reinforced concrete building is relieved only by a large entrance archway and a bronze Victorian coat of arms by Norma Redpath on the front facade. The oriental influenced floating roof, with upturned eaves, is separated from the walls by a continuous band of high clerestorey windows, and a moat surrounds the entire building. The water theme is continued at the entry where a flow of water runs down a glass screen, now known as the water wall. The brief required the inclusion of a reception hall for State functions and this is four storeys in height and features an abstract ceiling of multi-coloured glass by the artist Leonard French. Two principal double height floors, at ground and second floor levels, contain the main gallery spaces, with intermediary floors containing many of the service areas. Contrasting internal finishes include bluestone, bush-hammered concrete and Victorian ash veneer panels, baffles and gapped lining boards.

Grant and Mary Featherston were commissioned to design the furniture and fittings for the gallery in 1966. They were required to address a wide range of issues, including security, atmospheric control and the housing of a variety of objects, and, in response to their brief, developed a system of butt jointed glass cases which provided an unencumbered view of the objects on display. These were supported on rectilinear frames of Victorian ash, consistent with the material used throughout the interior.

In response to the specific site, the original master plan included a triangular planned Art School to the west of the gallery and circular spire to the north, and in 1970 the former was opened. Associated auditoria and theatres were also planned for future development and these were completed in the early 1980s.

A major redevelopment of the National Gallery was opened in 2003. Designed by Italian architect Mario Bellini, in conjunction with Melbourne architects, Metier 3, it retained the basic design and inserted a new gallery. Many important features of the original Grounds design remain intact, including the exterior bluestone walls, Leonard French ceiling, water wall entry (although moved), and many of the original internal finishes.

How is it significant?
The National Gallery of Victoria is of architectural, historical and social significance to the State of Victoria.

Why is it significant?
The National Gallery of Victoria is of architectural significance as the most ambitious and most successful of the works from the post-Second World War period to 1960, in the development of a modern Australian architecture. This period of experimentation in structure and expression was influenced by the Modern Movement in Europe and America, and resulted in a specific Australian response.

The National Gallery of Victoria is of architectural significance as a major work by noted Australian architect, Roy Grounds, who, together with his former partners Robin Boyd and Frederick Romberg, was one of the most influential architects of his generation, pioneering modernist design. The gallery represents the peak of his five decades of practice. It is his best known work and a building that provoked a mixed reaction from the architectural profession. Grounds is significance as an architect was confirmed when he was awarded the RAIA Gold Medal in 1968 and was knighted the same year.

The Gallery is of architectural significance as a highly detailed, integrated design. This is seen in the variety of internal finishes employed, the design of furniture and fittings, and in the integration of art work in the building, such as the ceiling by artist Leonard French and the coat of arms by Norma Redpath.

The Gallery is of historical significance as the first major public building to be constructed in Victoria in the fifty years following the First World War, and the first entirely new Art Gallery to be constructed in Australia after the Second World War. It set new standards for exhibition layout, art storage and conservation and represented a new era in the arts and public architecture. The site became the primary focus for the arts in Victoria and provided Melbourne with an important visual image.

The National Gallery is of social significance for the high level of public ownership and affection it attracts. This is particularly evident in the large amount of money raised by public appeal and the strong attachment felt with the visible images of the water wall and the Great Hall.