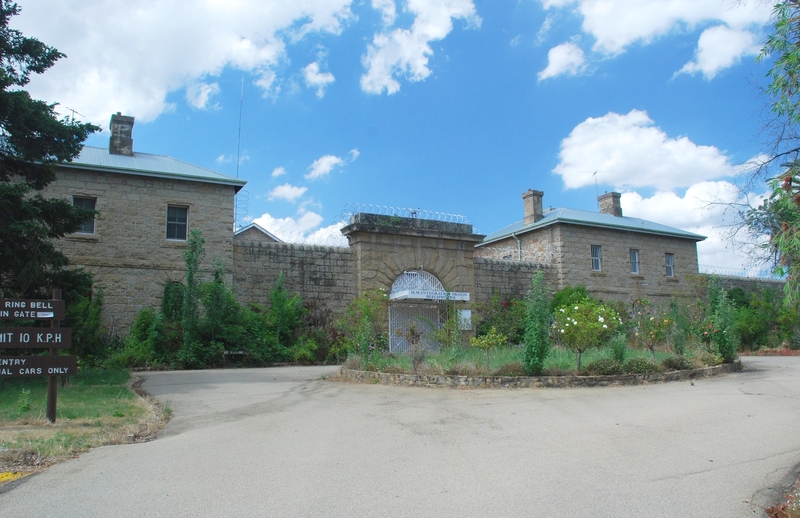 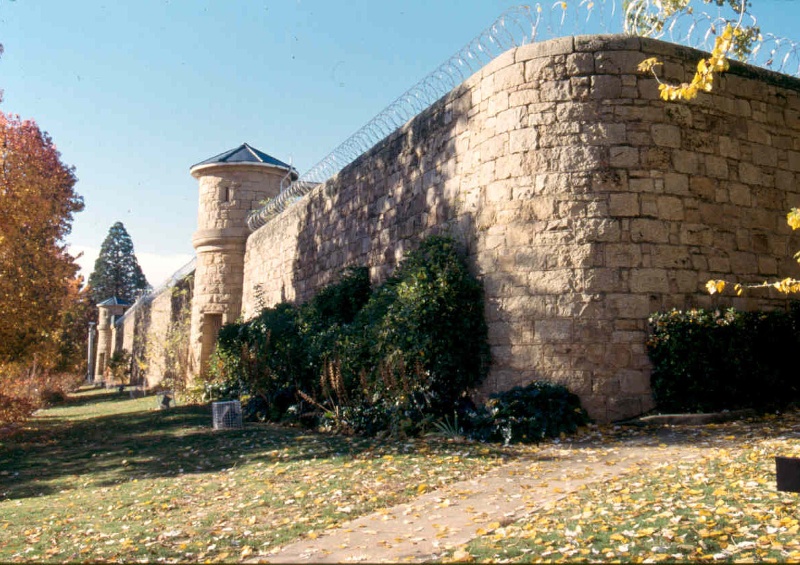 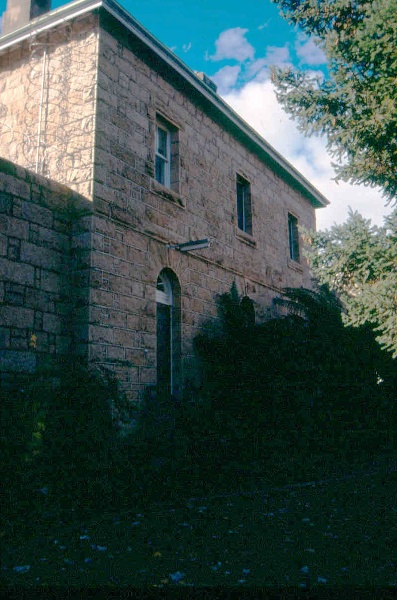 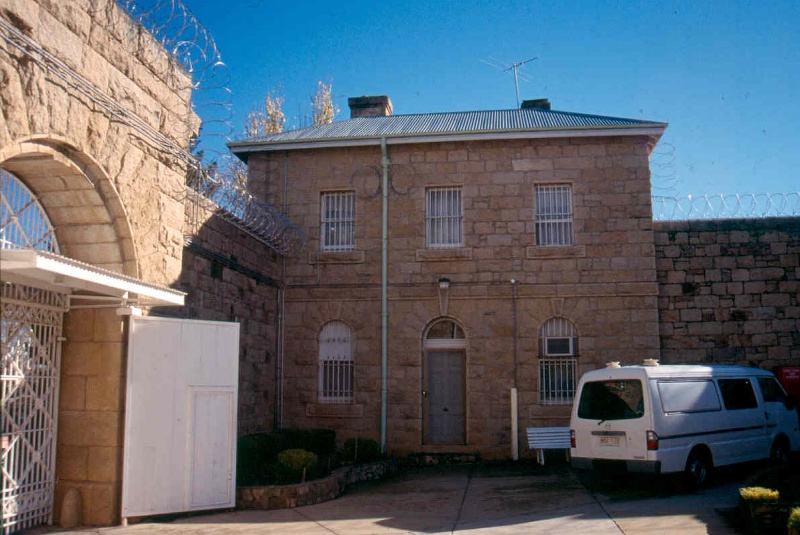 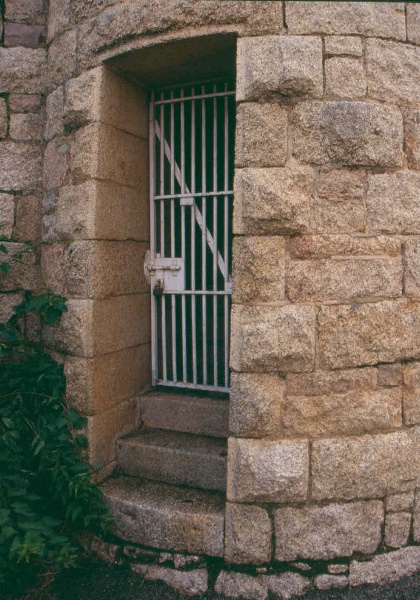 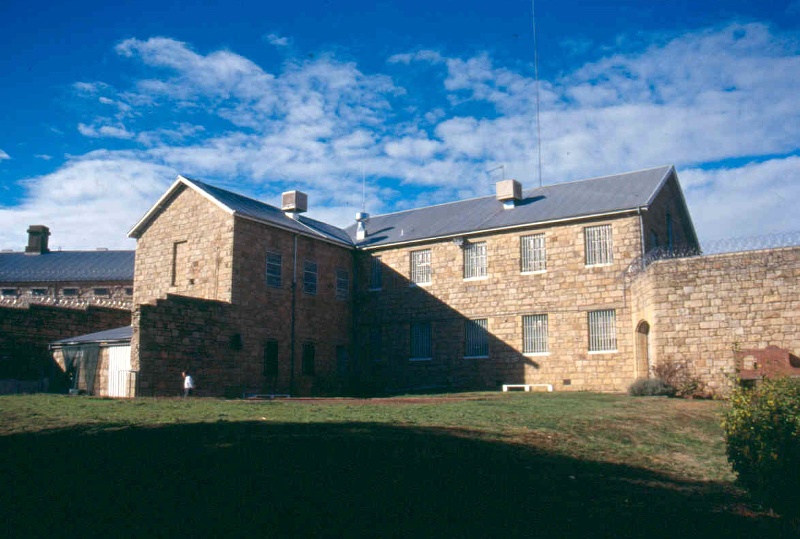 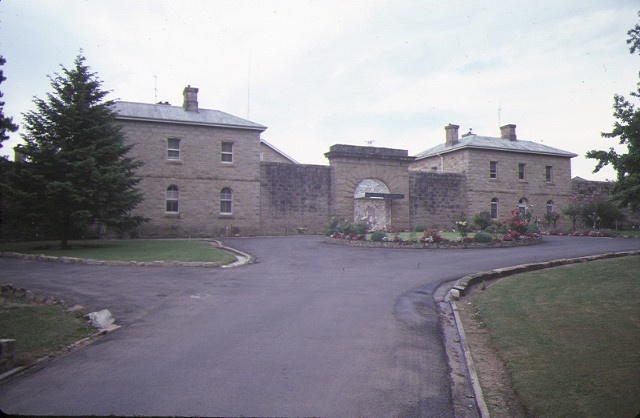 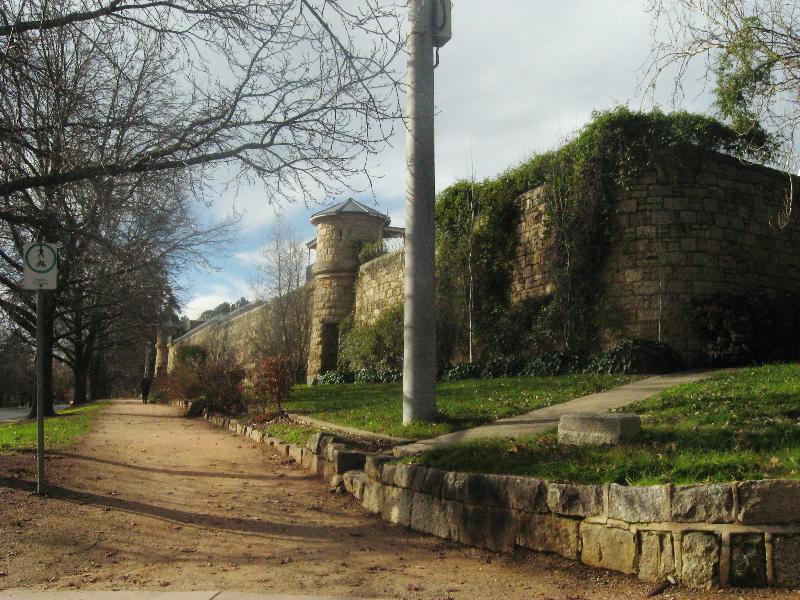 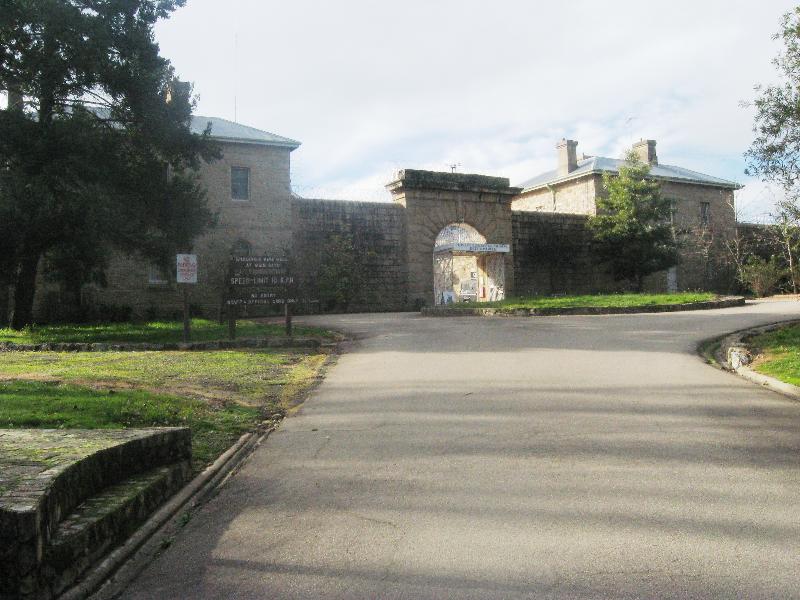 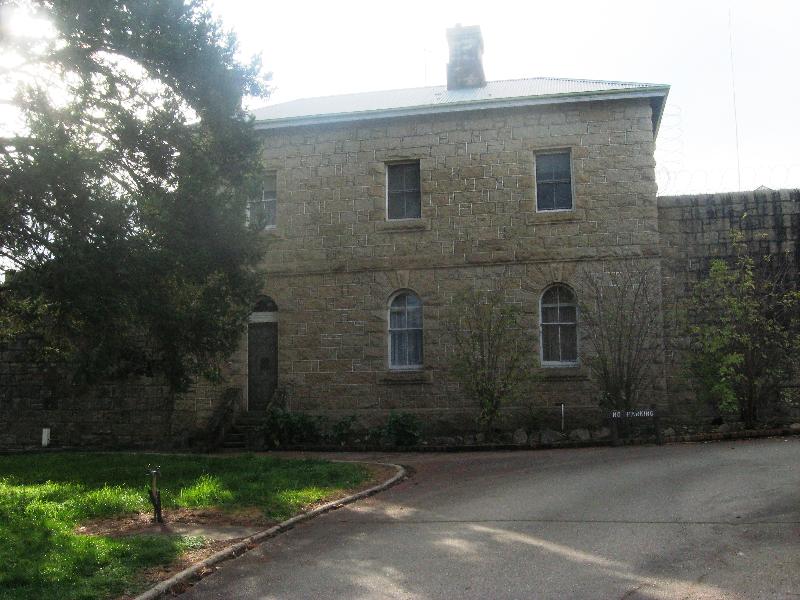 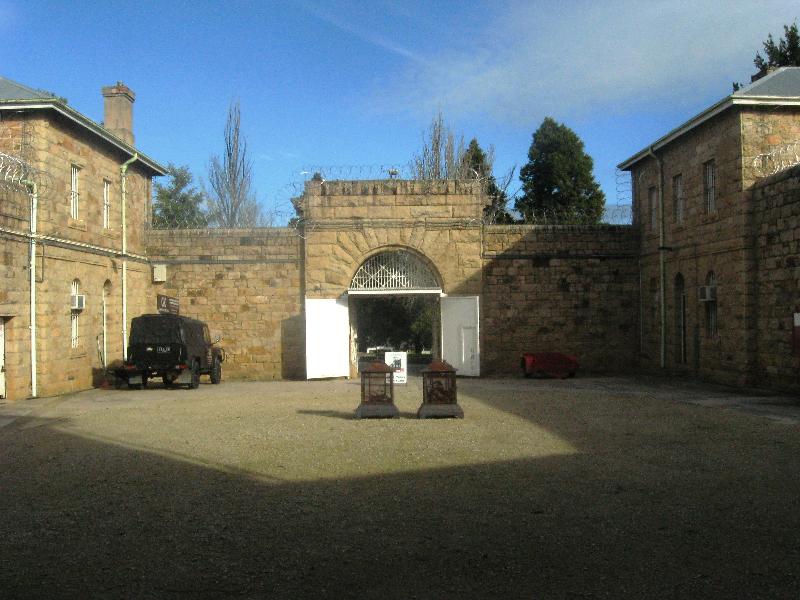 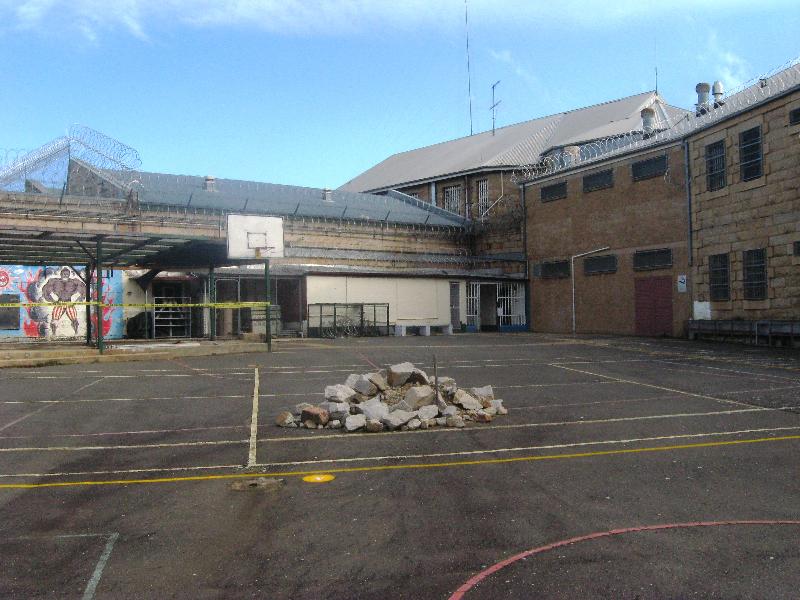 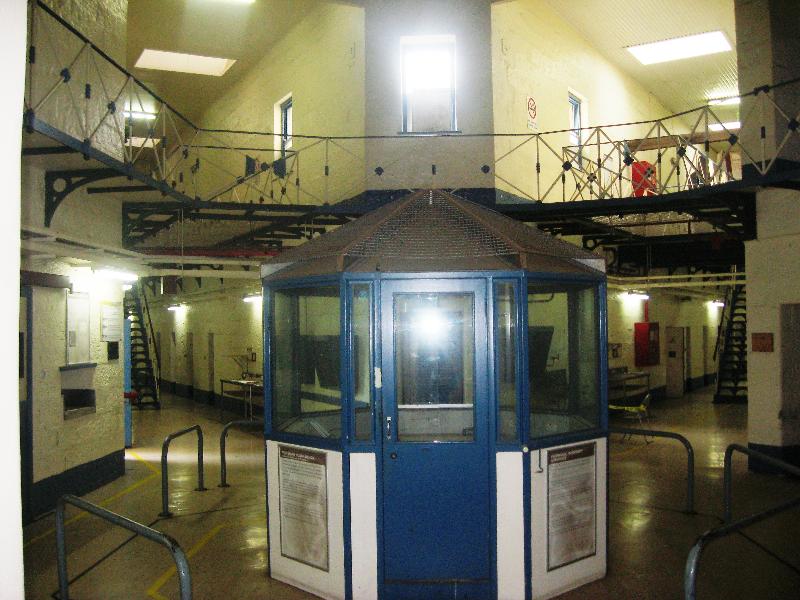 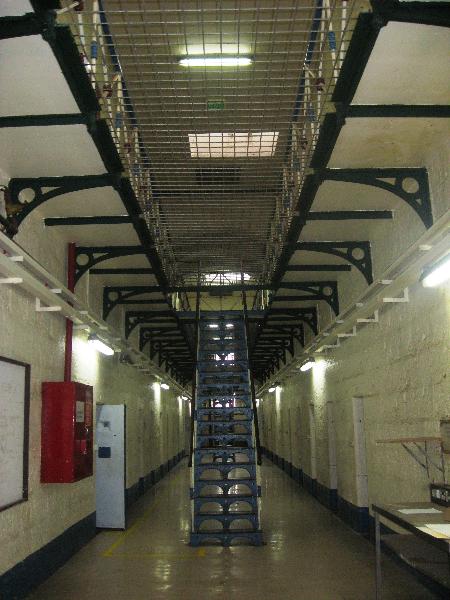 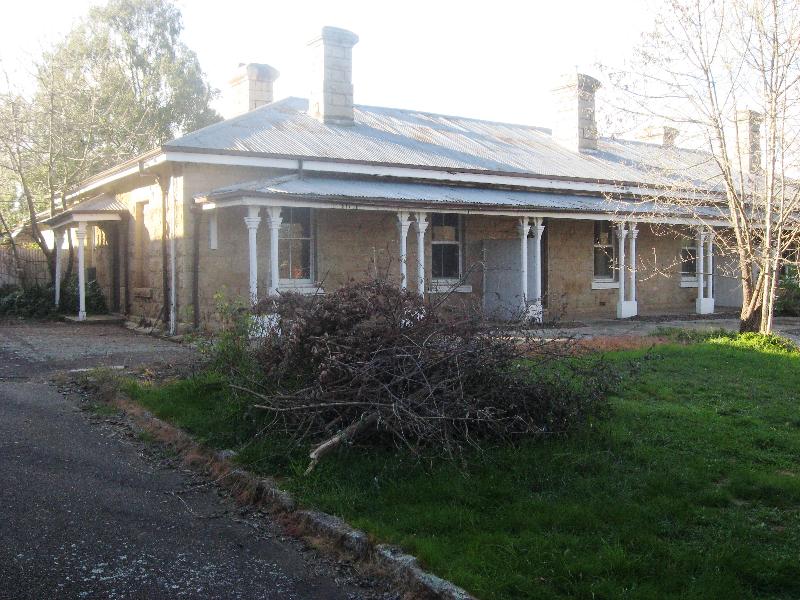 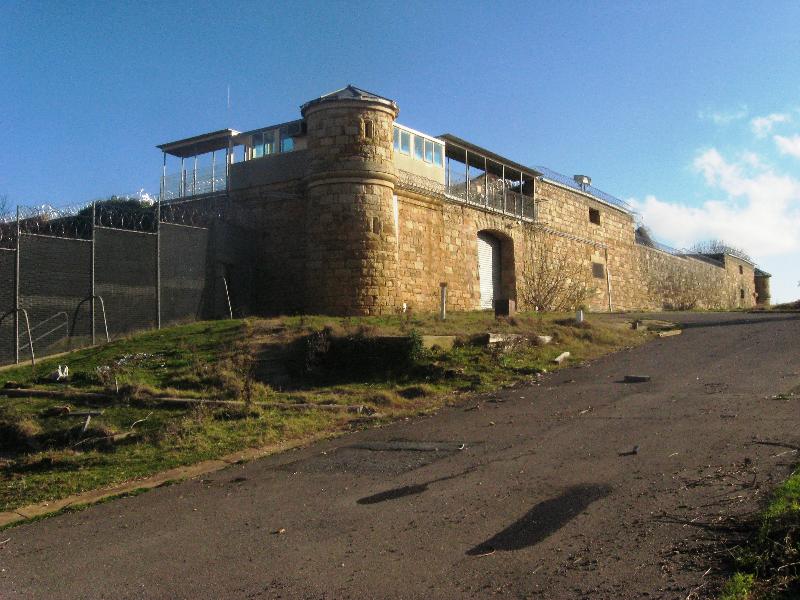 The Former Beechworth Gaol, including: the perimeter walls and watch towers, the entrance gateways and iron gates; the gaolers quarters and turnkeys quarters on either side of the entrance; the interior division walls; the two cell blocks, the central hall, the kitchen wing, the former dining hall and office wing; the former governor's residence to the east; the stone quarry at the rear; the front garden; the external granite retaining walls around the site; and the archaeological potential, including the nineteenth century burials.

A major period of gaol construction began in Victoria during the late 1850s, with nine imposing stone gaols built between 1857 and 1864. These were all designed by the Public Works Department, and conformed to a new English concept in prison design, called the panopticon, where radiating wings of cells could be kept under observation from a central hub. The gaols were all enclosed by high perimeter walls with observation towers and stone gateways flanked by staff living quarters. The Beechworth Gaol was built in several stages, using granite quarried on the site by prisoners. The panopticon with two wings of cells, a central hall and a kitchen wing were built in 1859-60, and the gaol opened in 1860 while still incomplete. The walls, offices, outhouses and staff accommodation were completed by 1864. The contractors were H Dalrymple and George Simmie and the total cost was £46,763. Conditions were primitive and it was not until 1993 that the cells were provided with toilets and running water. The gaol has a close association with the Kelly gang, with Ned Kelly imprisoned there for a total of about two years between 1870 and 1880. Ned's brothers Dan and James, other members of his gang and his mother, Ellen, and her new-born baby also spent time there. Twenty-five Kelly sympathisers were held there awaiting trial, as were Crown witnesses during committal hearings. Between 1865 and 1881 eight prisoners were executed at Beechworth, and were buried in unmarked graves within the gaol grounds. Subsequent executions of prisoners from Beechworth Gaol were carried out in Melbourne. The coming of the railway in 1876 resulted in many prisoners being transferred to Pentridge rather than remaining at Beechworth, and by the early twentieth century prisoner numbers were so low that the government closed the gaol in 1918. It was renovated and re-opened in 1926 as the Beechworth Reformatory Prison for hardened male criminals. In 1951 it became the Beechworth Training Prison, intended for the rehabilitation of younger prisoners. At that time new facilities for work, accommodation, education and recreation were added. In 1990 the gaol became the Beechworth Integration Prison. With the building of a new minimum security prison outside the town, the gaol was closed in 2004 and sold for private development.

The Former Beechworth Gaol is located in a landscaped setting on an elevated site at the northern part of the town, and is a prominent feature in views along the main street from the south. The buildings are of light-coloured granite. The gaol is enclosed by high walls with watchtowers and arched entrances with iron gates on the east and west sides. On either side of the main entrance are two-storey Turnkeys' and Gaolers' Quarters. Within the perimeter walls are the two two-storey cell blocks, the dining hall and office wing, all radiating from a central observation hall. There are further high walls dividing the gaol internally and forming a number of open yards. To the east of the perimeter wall is the former Governor's and Warders' Quarters, a single-storey stone building with verandahs along the east and south sides. At the front of the gaol is a formal entry forecourt with landscaped gardens (now deteriorated), driveways and pathways with stone edgings. Around the site are various stone retaining walls, and on the northern boundary is the quarry from which the stone of the buildings was excavated (partly concealed by late twentieth century buildings). Burials of the prisoners executed at the gaol are probably located adjacent to the interior of the western wall.

The Former Beechworth Gaol is of historical, architectural and archaeological significance to the State of Victoria. It satisfies the following criterion for inclusion in the Victorian Heritage Register:

Why is it significant?
The Former Beechworth Gaol is historically significant for its association with the major program of prison construction which occurred in Victoria in c1859-64, when nine new prisons were constructed around the state, transforming the Victorian penal system. The Former Beechworth Gaol reflects the great increase in the population of Victoria after the discovery of gold, and the resulting increase in crime, especially in the goldfields areas. The Former Beechworth Gaol is associated with the development of the penal system in Victoria, having been in use from 1860 until it was closed permanently in 2004. It demonstrates the conditions under which prisoners were kept in the mid-nineteenth century, when prisoners were subjected to solitary confinement in single cells without adequate lighting, heating, sewerage or running water. The quarry at the rear is significant as a demonstration of the hard labour carried out by the prisoners, in excavating the stone for the construction of the prison and other public buildings in the town. The Former Beechworth Gaol is a key element in the group of nineteenth century public buildings in Beechworth, which reflect the role of Beechworth as the government administrative centre of north-eastern Victoria at the height of the gold rushes. It is of historical significance for its associations with the bushranger Ned Kelly, who served a total of about two years there between 1870 and 1880. Kelly's mother and brothers and suspected Kelly sympathisers were also held in the Gaol. [Criterion A]

The Former Beechworth Gaol is architecturally significant as a substantially intact example of the panopticon-type prisons erected in Victoria in the nineteenth century. It demonstrates the restrained ornamentation and high quality construction characteristic of Public Works Department buildings at the time. The Former Beechworth Gaol is a major architectural work of Gustav Joachimi, whose other designs include the entrance to Melbourne's Pentridge Prison (1858-9, VHR H1551), Benalla Court House (1864, VHR H1070), and A-Block and J-Block at Victoria Barracks in Melbourne (1860-7). It forms part of an important precinct of public buildings in Beechworth. [Criterion D]

The Former Beechworth Gaol is archaeologically significant as the burial place of eight prisoners executed at the Gaol between 1865 and 1881. [Criterion C]

The Gaol is open to the public and conducts three different day and night time guided tours see www.beechworthgaol.com.au for details or call 1300 774 766